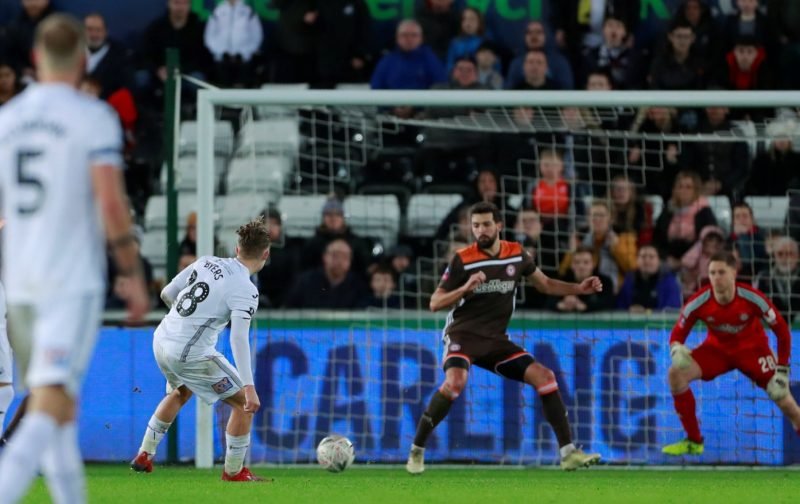 This week we welcomed the news of George Byers’ new three-year contract extension – keeping him at the club until 2022 and after a promising end to last season, can the 23-year-old play a more vital role next season in Steve Cooper’s midfield?

After an in-and-out start to the last campaign under former boss Graham Potter, where an injury halted his first-team progress, Byers later returned in the new year and was able to establish himself in the team, operating deeper than his previous attacking role for the under-23s, often operating as a right-sided pivot – helping to link the play from defence to the right-wing in attacking transitions.

Byers also played deeper, receiving possession from the centre-backs to help progress the ball forward from inside his own half but Byers’ shows his true potential in the opposite end of the pitch – linking up play in the final third.

With Bersant Celina also available as a number ten, you wonder if Byers will continue to play a similar role or will new manager Steve Cooper find a more attacking role for George.

Reacting to his new contract and ‘pushing on’ next season, Byers said:

“I’m really happy to sign the new deal, I can’t wait for the season to start for real again.

“I really enjoyed my football last season. I had an up and down start; playing five games and then getting injured. I didn’t get back in the side until the January, but from then on, I stayed in the team, so I must have done okay.

“I’m aiming to carry on where I left off,’’ he added. “I think I showed in the second half of the season what I can do.

“But I want to keep on improving. I feel I’m ready to kick on and I believe there is still more to come from me. I’m determined to be better than last season.’’

@G_byers and Bersant Celina – #PassScore compared 2018-19 season – where do they play their best attacking passes from? pic.twitter.com/4sbVhuSZ58

Another challenge for Steve Cooper will be fitting in the likes of Grimes, Byers and Celina into his starting eleven – if he chooses to, of course. Usually preferring a 4-2-3-1 or 4-3-3 formation, Cooper may continue to play Byers in a deeper role and look to get Celina more central as a natural ten, rather than his more left-sided role last season as Potter looked to get him to help the ball down the left for Daniel James.

The tweet above shows George Byers and Bersant Celina passing heatmaps side by side. Celina was very busy in that left inside channel, giving him the freedom to either pass out wide for James or to look to make passes inside and into more dangerous areas. Byers, meanwhile, was busy on the opposite side and nearer the edge of the final third, linking up with the likes of Connor Roberts down the right as well as looking to receive line-breaking vertical passes from Mike van der Hoorn.

With a season of Championship experience behind him now, it’ll be interesting to see how George Byers can continue to develop and improve next season under a coach with an excellent reputation of developing and improving young players.