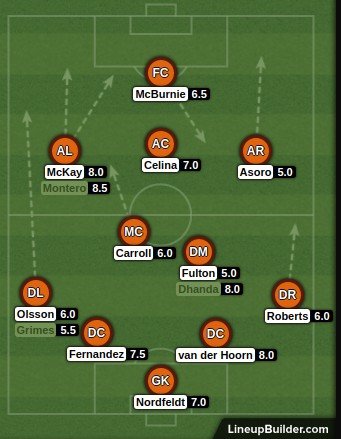 Player Ratings and comments as Swansea City get off to a winning start with an impressive win away at Sheffield United – their first there in the League since 1939.

Wasn’t tested massively as he took the number 1 jersey for the first time. Decent distribution and there were no dodgy moments that we might have expected. Made a huge save to save Connor Roberts’ blushes in the second half.

Didn’t get forward as much as he probably would have liked, and couldn’t do much about the near-own-goal that Nordfeldt did brilliantly to keep out.

Took the captain’s armband from Federico Fernandez which was a surprise, but it was a towering and a skipper’s performance. He was like a tower in the heart of the defence, won a number of headers as United’s hopes of creating with wide crosses weren’t effective. Made 16 clearances, 3 less than the entire Sheffield United team combined.

A very solid performance and formed an impressive partnership with van der Hoorn, they complimented each other well. He showed that it’ll hurt us if we were to sell him before Thursday’s deadline because they could be key to us having a decent season this year.

Lacked support in attack and probably would have enjoyed it more with Montero on as McKay liked to drift inside. No surprise that he was brought off after a lack of pre-season preparation. Solid enough defensively.

He really struggled as we expected. The game sort of passed him by and Graham Potter admitted that he was struggling, although he didn’t clarify whether that was injury-related or not. We’ll need better in his position and hopefully, Woods is that man.

Grew into the game after a quiet first half, enjoyed his best spell after United’s opener when we went on the front foot. Went close with a fierce shot from distance that didn’t go far wide of the target.

Moments of real quality from the attacking midfielder but did lose possession at times but that’s what happens when you try to be positive. In particular, there was one in the second half that led to an open chance that United wasted. He didn’t really link up much with McBurnie but that was mainly because the striker had to drop deep to add support in midfield. Potter’s decision to drop him deep into a holding role was a good one as Fulton struggled there.

An impressive and exciting debut from the £500,000 Summer signing. Before the changes, he was our main hope of getting back into the game and it was no surprise that our best chances and goals saw him directly involved. Almost scored himself with a superb volley that crashed against the bar after Montero’s long cross fell nicely for him unmarked at the back post.

A disappointing debut from Asoro on the right flank. Was rarely able to show his pace and trickery down the right and lost possession too often. We did look a lot more threatening when Montero came on and McKay shifted to the right.

I feel that 6.5 is an unfair scoring for Oli. He worked hard and he had to drop deep into midfield which didn’t help his game. However, things changed when we made positive changes and we got back into the game. Didn’t see much of the ball in attacking positions which keeps his score down to 6.5, but he found himself in the right place at the right time to net a goal.

Highest scoring of the lot. He was only on for about half an hour but without him, I don’t think we’d have won it. He rolled back the years and it was like watching him at his peak from a few years ago. He caused all sorts of problems down the left and he was a joy to watch again. His celebration after Dhanda’s late winner was great too!

Did what was needed with 20 minutes to go after coming on.

Well, what a dream debut! First ever touch in senior football and he nets a late winner at Sheffield United! Swansea got 5 players in the penalty area and Dhanda was there to fire home. Credit goes to Potter as wel for making an attacking substitution, rather than going for a defensive change and putting Amat on.