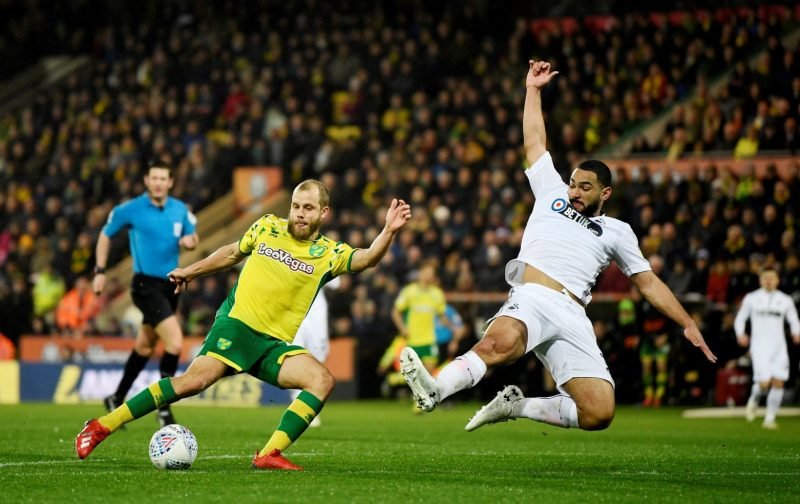 Swansea City manager Graham Potter was missing from Friday’s pre-match press conference ahead of Sunday’s Championship showdown at Blackburn Rovers due to a sickness bug which saw his assistant Billy Reid answering the media’s questions.

One of the questions was about the performances of Spurs loanee Cameron Carter-Vickers, who has featured in 29 Championship games this season due to Joe Rodon’s injury during the 1-0 home win against Sheffield United.

Reid has been impressed by the American’s performances in 2019 and while some fans have questioned how he has been able to keep his place in the starting line-up, judging from these comments, the coaching staff have been happy with his performances alongside ever-present captain Mike van der Hoorn:

“Cameron came here, he had to bide his time to get into the team because Joe Rodon was exceptional alongside Mike van der Hoorn,”

“Unfortunately Joe picked up his injury, but Cameron has come into the team and, in my opinion, he has made huge progress throughout the season.

“We asked him to step into the game in terms of how he played on the ball and the progress he has made on that side of his game has been excellent, and he has been a big part of the run we have been on.

“He is a player who has been an excellent signing. He is a strong boy, he is still 21 years of age but he looks a lot older than that, to be honest with you.

“But I think there is further progress to come from him over the next few seasons.”

Defending set pieces has been a huge weakness for us this season and the raw stats would suggest that it got a lot worse once Nordfeldt and Carter-Vickers were restored into the starting line-up. It would be unfair to link that weakness to either individual in particular because when analysing some of those goals conceded from corner kicks, neither of those two players were at fault – particularly Carter-Vickers.

If you’re interested in the stats breakdown, they’re below:

The stats above are based on who started each game so the Sheffield United 1-0 win is given to Joe Rodon despite his injury midway during the first half.

With Mike van der Hoorn highly expected to leave in the Summer, despite his one-year contract extension, you would expect Joe Rodon to establish himself as a first-team regular next season. I would also assume that Potter will enquire about trying to keep Carter-Vickers again next season with another loan the most likely option.

Carter-Vickers’ passing is one part of his game, along with his lack of height, that’s often come under questioning from Swans fans. While van der Hoorn looks to play difficult forward passes to help build attacks from his own half, Carter-Vickers very often takes the easiest and safest option when the ball is at his feet. However, we have seen him be a bit more adventurous with his passing in the last few weeks and that’s one part of his game that would need to improve as that is becoming ever more of a demand from the modern centre-back.

One point that has been raised more than once is about why, now that Rodon is fit, are we not giving our own youngsters game time and instead keeping a loanee in the side in Carter-Vickers. It’s a fair point as Potter is keen to develop our young players but it makes you wonder if we’re trying to improve our chances of keeping the 21-year-old for a second season loan.

You always wonder if the data matches the eye test. No surprise that data suggests that Carter-Vickers averages very easy passes. Left Fernandez in for 1 game as passing was often his weakness as shown here. #xP #xPassing #ExpectedPassing #swans #sufc #twitterblades #twitterjacks

Hope not but if we can get Carter Vickers for a decent fee we should be in for him. Superb second half to the season and last night he was like a young Ashley Williams. Solid as a rock back there

Carter Vickers in and not Rodon again! Potter not learning very well. Ideal game to stick Benda in tonight. No pressure

I can't believe Carter Vickers still gets in this team