Derby fans react to missed opportunity in play-off race: “Not a bad result”, “will be key rivals next season” 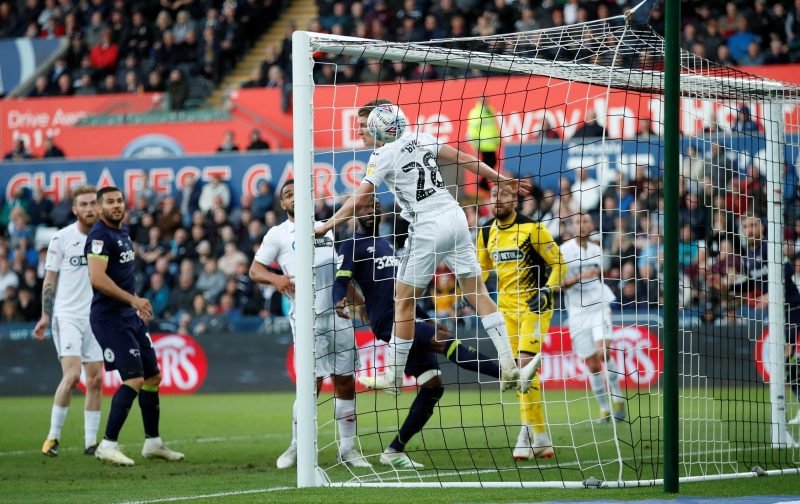 Derby County fans were left frustrated on Wednesday night as their side failed to hold on for a win over Swansea City at the Liberty Stadium that would have all but guaranteed themselves a place in the playoffs – thanks to a superior goal difference over Middlesbrough.

Considering the start they made to the game, Derby County took a deserved lead as the Swans showed their weakness at defending corners yet again. Switching to a man-marking system in the last two games in the hope of seeing improvement in that area, Potter’s side suffered again as van der Hoorn lost the aerial battle at the far post as Keogh’s header midway through the first half flew over Nordfeldt’s head and into the net.

Lampard’s side dominated, pressed high and stopped the Swans from playing their usual game from the back, forcing them into errors and losses of possession in dangerous areas. Like the former Chelsea player said afterwards, his side should have gone into the break with a more comfortable lead given their strong start.

It was roles reversed in the second half however as Graham Potter must have got his point across after a pretty lacklustre showing in the first 45 minutes.

He changed the team around and there was a need for a double substitution. Taking Naughton and McKay off, he switched to a back three, moving Grimes to left centre-back with Declan John as left wing-back and Fulton taking up a deeper midfield role.

The switch-up worked and Potter deserves credit for making it work as his side looked lost and void of ideas in the first half. The equaliser came midway through the second, McBurnie’s effort was saved but Routledge bounced on the loose ball first from close range.

Derby remain in 6th, a point ahead of Middlesbrough with a +6 superior goal difference, meaning a win would have pretty much guaranteed their place.

There were some mixed views from their fans after the game. Some saying it was a wasted opportunity whereas others felt it was a good point away at Swansea.

“What a wasted opportunity.”

“Derby getting absolutely schooled in midfield when it comes to delicate footwork. We can’t move it at all in a congested area and eventually Johnson gets robbed, and Bennett has to bring down McBurnie about 23 yards out or so. “

“We actually defended Corners pretty well in this game on the whole. I know that sounds strange having conceded from one, but the goal wasn’t THAT defensible. The ball in was excellent, the jump was monstrous, the header powerful. Brilliantly saved by Roos onto the post and then it fired out directly to a Swansea player half a yard out. Not like it was bouncing around and no-one could clear it.”

“Gutted. Poor second half but Swansea are a good side. If it does all go wrong they’ll be key rivals next season. Unlucky Rams.”

“Fair result against a good Swansea side but poor goal to concede.”

“Hang on, let’s give Swansea a bit of credit, they played well second half. Good side.”

“Good side Swansea but they had the freedom of the pitch second half. Which team looked like the one with it’s play off hopes on the line? More urgency, purpose and confidence on the ball. We need a tonne more of that than we saw tonight.”

“I thought mason mount was having his best game in a Derby shirt, but we fizzled out.

Pity because it had the makings of a classic but a bit of credit to graham potter. He’s doing a very good job there. His tactical switch seemed to work. “

“It was a difficult ground to come to and they will be right up there next season, so I’m taking the positives we caused them problems.”