No striker, no worries again for Swansea City against Middlesbrough 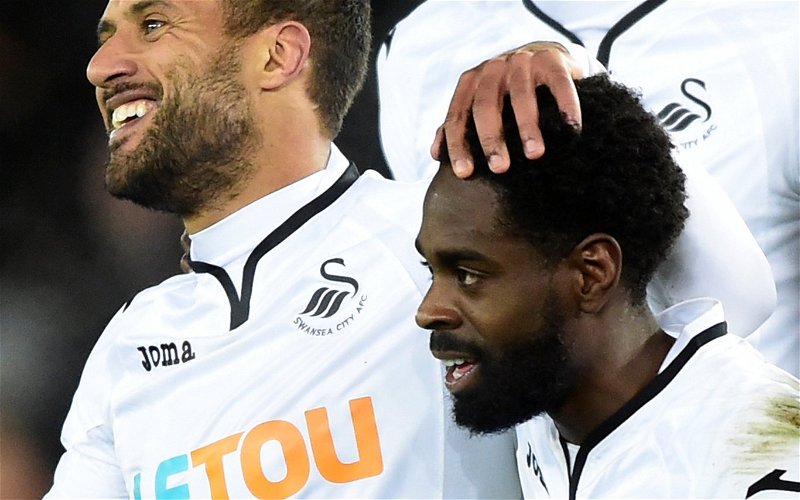 Swansea City were happy enough to leave their top goalscorer on the bench for their second home game in the space of five days as Oli McBurnie was left unused on the sub’s bench as Matt Grimes, Wayne Routledge and Connor Roberts were on the scoresheet for another convincing and well-deserved win.

Manager Graham Potter didn’t feel the need to make many changes from Tuesday’s 3-0 win against Brentford. Jay Fulton was unlucky to get dropped after an excellent performance in mid-week but it was expected given that Matt Grimes was never likely to play at centre-half against a physical, tall and direct side like Tony Pulis’ Middlesbrough.

On Tuesday night, Nathan Dyer scored his first goal since August 2014 and Wayne Routledge has netted twice this week too. With James also on the scoresheet against Brentford and producing another instrumental performance on Saturday, you could say it’s a week for the wingers.

Questions might have been asked before kick-off as to why Potter didn’t name a striker, McBurnie, against a side like Middlesbrough. However, the Swans are beginning to show that they are flexible enough to cope with different types of tests. Brentford played into our hands with their ineffective high press and similar style of play. Middlesbrough were much the opposite, pressing with their front men but quickly retreating back and starting with a back five.

Swansea City picked up from where they left off against Brentford. Slick passing, excellent movement and confidence playing out from the back once again meant that Middlesbrough just couldn’t cope.

Matt Grimes converted from the penalty spot to give us a deserved lead on 34 minutes. Before the opener, we should have scored a couple at least. Dan James cut inside and it looked as if his shot clipped the upright. Bersant Celina couldn’t direct a volley down from close range before Wayne Routledge was sent through on goal but his effort crashed back off the bar.

Dan James cut inside from the left and was brought down and with no contact made on the ball, it was a pretty straightforward decision for the referee to point to the spot.

Four minutes later, Bersant Celina linked up with Wayne Routledge and this time the winger, playing as a central false nine, made no mistake inside the box as he delayed his shot before picking out the bottom left corner.

It’s been a common criticism of the Swans this season, not taking their chances when on top, but amazingly we’ve taken a 2-0 lead at home by half-time in consecutive matches.

Middlesbrough had barely got a look-in during the first half. Potter’s Swans were in control and the game should have been wrapped up but at 2-0 there was always a chance for Pulis’ side to get back into it, especially given our weakness at defending set pieces and their reliance on them for goals.

Middlesbrough did push further forward in the second half and they got on the ball much better after making and using up all their subs by the 55th minute following a forced change due to injury in the first half.

A sublime cross from Bersant Celina with the inside of his right foot over on the left side almost got Nathan Dyer involved in the scoring but he too couldn’t keep a volley down enough from close range.

A third goal was needed to guarantee the three points as a goal back for Middlesbrough would have given them some hope. Bersant Celina showed his class once again though with 19 minutes remaining. He created 8 chances for his side and nobody else came close to that number on the day. His second goal assist of the afternoon was quite something, such a controlled and well-weighted pass to pick Connor Roberts’ inside run into the box. The Welsh fullback touched the ball beyond the goalkeeper and he was clearly delighted, as we all were, to find the net and give us some real breathing room.

Middlesbrough did get a goal back and it was disappointing again to concede from a corner. This time an out-swinging cross from the left which wasn’t cleared and the ball fell to Saville, unmarked inside the box to fire the ball home for a consolation goal.

Bersant Celina probably should have had a hatrick of goal assists when he put Joel Asoro through on goal but the winger fluffed his lines in front of the goalkeeper.

An excellent, professional and impressive performance from the Swans against what’s been a tight Middlesbrough defence this season. We really do look like we’re in our groove now and we’ll go into Tuesday’s home game against Stoke City with plenty of confidence.

It might prove too little too late now to think about looking up to the play-offs, but nevertheless, we can at least enjoy these excellent performances.