Does Graham Potter Really Deserve Some of The Blame After Bristol City Defeat? 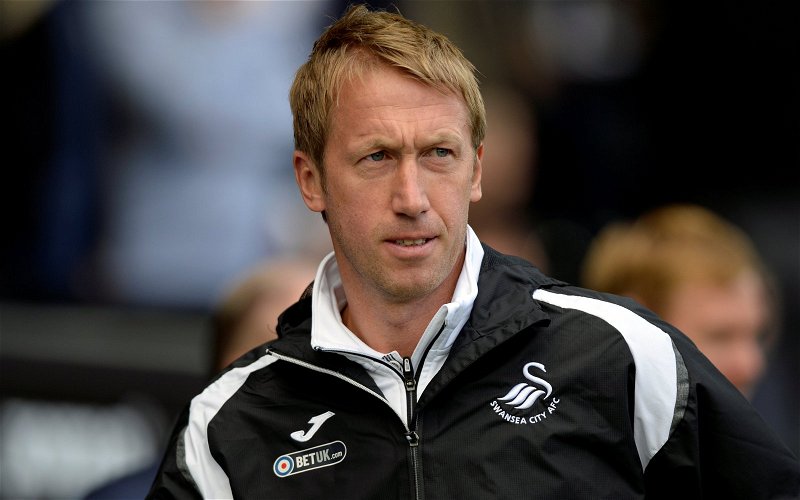 Graham Potter suffered his first defeat as Swansea City manager at home this afternoon as Bristol City’s early opening goal after just 31 seconds was enough to get the three points.

It’s fair to say I think that our first defeat could have come earlier this season – in particular away at Birmingham City who wasted a host of chances to win the game as it ended goalless.

We were bullied that night and it was the same thing again today. Bristol City weren’t quite as physical and direct as Garry Monk’s Birmingham City were but they were tactically well prepared and set up pretty perfectly to block Swansea’s out from the back.

Not only that, but Bristol City were able to harass us in our own half and it was rather easy for them to bully us off the ball and create promising counter-attacking situations.

With Leroy Fer not risked as a starter twice in only four days, Potter had to revert back to a 4-3-3 which meant that Bersant Celina had to initially drop deeper in the first half. Tom Carroll and Jay Fulton is not a midfield combination you want to see in action and Carroll, in particular, struggled in deep positions. It was no surprise that he was one of the two players hooked off at the restart.

Criticise Potter’s tactics if you have a better solution to his changes today, by all means. But you don’t, because there wasn’t one.

There was some criticism on social media after the game in Graham Potter’s direction, mainly for his substitutions and tactics, but I can’t help but feel that he’s had his hands tied. Some of the criticism towards Potter was his decision not to stick with the team that produced an excellent performance against Leeds, but Leroy Fer was never going to be able to start twice in a week. The other criticism was around his decision to bring off his only striker Oli McBurnie and replace him with Leroy Fer. With around 20 minutes remaining, Leroy Fer was desperately needed to add some strength and dynamism in midfield but some fans weren’t happy to see our striker go off when you’re chasing a 1-0 deficit.

Potter later admitted to the official site that he felt McBurnie’s energy levels “were a bit low”:

“Oli’s given such a lot over the last few weeks – he’s been fantastic,”

“He’s had a little crack in his toe so he’s been playing with a bit of pain. I thought his energy levels were a bit low today.”

Potter is spot on. McBurnie has indeed given a lot lately with a lot of his off-the-ball work – pressing and shadowing going unnoticed at times. And with a complete lack of alternative options available to him, the last thing we need is for our only senior striker to pick up an injury.

Oli McBurnie looked knackered to me. Likely a wise decision to pull him off and save him. As mentioned earlier, Fer not fit for 90 so you'd rather put him on than take him off. Criticism to Potter is unfair IMO.

We’ve all known it since pre-season, but it was so evident today that Graham Potter really needs some reinforcements. We didn’t have another senior striker available on the bench to give us a plan b in attack. Leroy Fer is also not fully fit so we’re having to start Tom Carroll whose far too soft when things aren’t going our way.

Criticism in Graham Potter’s direction today feels a bit like blaming a chef for not cooking up a quality gourmet meal when you’ve given him the wrong ingredients. There’s only so much he can do with what’s at his disposal.

There’s just under a week now until the loan window shuts until January and it was glaringly obvious today that a midfielder and a striker are an absolute minimum requirement after we completed the loan deal for Spurs defender Cameron Carter-Vickers.

To those saying Potter was wrong not starting Fer, he is already playing more than he should be according to Potter and we are already taking risks with him. He’s just come back from a longterm injury. The problem is the fact that we have no one else. #swans #swanseacity