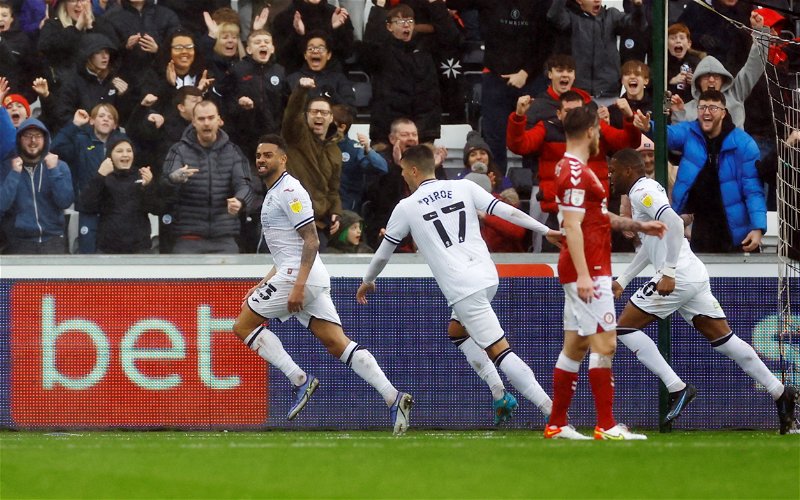 Russell Martin would have been expecting a hectic, somewhat tumultuous month with many additions and departures needed to help shape his playing squad. An attacking midfielder, a centre back and a left-wing back were desired by Swansea’s boss – but a position that hadn’t needed a second thought was the right wing-back slot.

This was until Swansea were rocked by the sudden departure of Ethan Laird – recalled from his season-long loan move by Manchester United and immediately sent to Championship counterparts AFC Bournemouth.

20-year-old Laird had been instrumental in Swansea’s first half of the season – a key attacking outlet in a side sometimes struggling for cutting edge. His ability to isolate full-backs 1 on 1 and utilise his unpredictable, quick feet had proved key to Swansea being an attacking threat while having so much of the ball.

It is true that Laird’s impact had somewhat tailed off towards the end of his loan spell, but this could easily be put down to the volume of minutes the youngster was being asked to play – Laird clocked up 1,625 minutes of action in just under 5 months at the club – the equivalent of 15 full ’90s.

Funds for a replacement were not included in the clubs January budget – they had expected to keep Laird for the full campaign – but they needed to act quickly due to the absence of natural alternatives at the club.

Exactly one week later, Swansea announced the signing of 29-year-old Irish international Cyrus Christie on loan until the end of the season. The announcement was met with a mixed reception. It was understandable that some fans were wary of the signing of a player whose most recent minutes of competitive action had come 4 months ago in the Carabao Cup after being frozen out of the first team at Fulham.

Other fans, though, were impressed by the wing-back’s pedigree – pointing to his 29 caps for the Republic of Ireland & £5m of accumulated transfer fees since 2017. These achievements, along with his 28 Premier League appearances in 2018/19, are even more impressive given it all started for Christie in non-league with loan spells at Nuneaton and Hinckley United in the formative years of his career.

It’s fair to say that, overall, the general consensus was that Christie would provide a solid, if unspectacular, return for Russell Martin’s men.

Oh, how wrong we were. Since arriving in SA1, the former Derby and Middlesbrough man has dazzled with his energetic, non-stop displays down Swansea’s right flank – chipping in with a goal and an assist in his 8 consecutive starts to date.

His instant impact has been quite remarkable for a player who hadn’t even stepped foot on a Championship pitch since his last outing for his previous loan club, Nottingham Forest, in May 2021. Christie’s relentless attacking output has been the most unexpected aspect of his success so far – he had threatened to score numerous times in games against Huddersfield and Preston before opening his account with a header against Bristol City.

First goal for the Swans 🤩 @cyruschristie

Swansea fans and staff will be aware of the fact that the loanee is likely to be available on a free transfer in the summer due to the upcoming expiry of his contract at Craven Cottage – this is something that the club have to be alert to.

All evidence so far suggests that Swansea should be making Christie their first summer signing on a permanent contract, but they may need to get in there quickly before he is identified as a target for other clubs with more financial pull than the Swans.

The bottom line is that Christie has been a superb piece of recruitment from those in charge at the Swansea.com Stadium. For all the value that he has added on the pitch, it seems he has added just as much off it.

Swansea pride themselves on the intensive due diligence and character references that they conduct on players, and they have definitely got another ‘good guy’ in Cyrus Christie.

The evidence for this is there for all to see – from taking a pay-cut to join the club after the deal looked on the verge of collapse to his involvement in running his own charity organization, the Cyrus Christie Foundation which, he says, aims to ‘create positive social change’ and has promoted the distribution of food to children in his hometown of Coventry as well as supporting food banks in Nottingham.

Cyrus is one to hang on to for Swansea, and here’s to plenty more of his tireless, athletic displays well past the end of the season in May.