Analysis – The best formation in football(?) but can Martin make it work at Swansea? 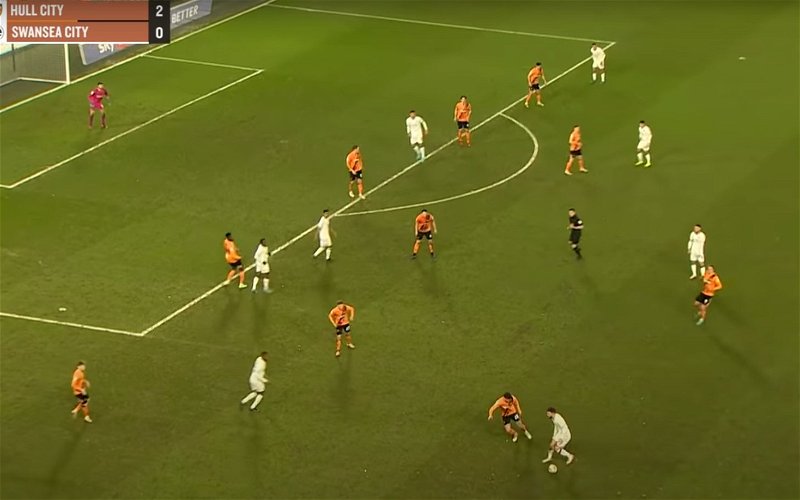 There was a very long and detailed thread that caught my eye on Twitter this week entitled “325/235: The Best Formation in Football?” and reading through it, it made me think about Russell Martin’s ambitions at Swansea City using a high possession philosophy in a back 3 formation.

Within the thread, Twitter user Jamie Scott uses some of the top teams in the Premier League as examples of those who use the formation to support the theory that it is indeed the best formation in football at present.

That instantly prompts the question, is Russell Martin being overly ambitious trying to get this system to work or, on the other hand, should he be praised for being brave enough to commit to employing what is a system that requires a lot of work on the training ground to get it right.

After all, Pep Guardiola didn’t get overnight success at Manchester City. Jurgen Klopp needed some time to mould the squad to his liking and I’m sure Chelsea under Tuchel will build and improve to offer more of a title threat to the current top two.

Up to now, it feels like Russell Martin is adopting a safer version of his ideal system because of the lack of quality he has in some key positions.

However, Russell Martin, arriving with 5 days before the start of the season, without a full Summer’s pre-season and transfer window, is trying to implement a style of play and a system that the top teams are using with great effect. There’s obviously huge differences between the two. Budget and the fact that they are amongst the best football coaches in the world with many years of experience behind them.

Can Russell Martin make this system work at a lower level and on a small budget? I’m still wondering if it’s going to be possible for Russ’ system to work with the players he can realistically afford at Swansea City. Hopefully he can prove he can. Lets look at some of the key points made in the twitter thread and establish whether high-quality players are a neccessity to make the system effective.

You can check out the thread below:

As the opening summary shows above, the 3-2-5 / 2-3-5 formation aims to dominate all phases of play, manipulate defensive blocks, exploiting transitions and establishing primary threats downstream from central threats.

The interplay between risk and reward, or ‘‘expansive’’ play and solidity, can be characterised by the demands of different players in different phases. In build-up, focus on retaining possession, establishing control, and maintaining a strong rest defence is paramount.

Early in the thread, Jamie talks about how effective the system is in possession with players occupying each of the 5 horizontal lanes of the pitch. Spacing and balance is key to maintaining high possession and good control of the ball. Simply, players that are closer together help to make passing easier and ensures control of the ball.

We’ve seen plenty of examples this season however where this isn’t the case as Russell’s side prefer to build through the wide areas. Wide centre backs shift too wide to play down the sides, the two attacking players do the same further forward leaving the one striker isolated and the midfielders in deep areas. This can leave large open spaces in the middle.

In the image above, we also see what’s referred to as a “secure rest defence”. Two central defenders occupying a narrow central area with added protection in front.

This looks very different in Swansea’s system though. We play with one central defender and two wide centre-backs who tend to push out wide leaving wide gaps through the channels.

We’ve seen this many times this season. The example below is from the Hull defeat, where Cabango is defending very wide  to cover Christie’s advanced position. You can see a narrow back four where defensive midfielder Jay Fulton has dropped back into the defensive line.

Early on, a narrow defence as Hull look to get in behind down our right. pic.twitter.com/0mzPLnPvgI

The example shown above in Jamie Scott’s tweet is based on a back four formation, the below shows how the system works with a back three.

As Jamie explains above, Chelsea’s back 3 and the double-pivot midfield in front are “compact”. However, the key point is in the follow-up tweet. The technical/physical quality of the players helps and when they lost key players, teams became “more comfortable against Chelsea”. Adding to the evidence to support the case that high-quality players with excellent technical ability are required to make this system work.

The graphic also shows an arrow for Mount’s movement – dropping deep which is what we saw at Blackburn when Paterson would drop back into his own half to help the build-up play progress through to the next phase.

The top teams are forever having to adapt as the opposition learn to deal with their key threats. As Jamie points out below:

In a similar vein, teams know not to give Salah or Mane time/space to run into when coming off the flank. Or giving the likes of Mount/Havertz/Lukaku the space to operate in as the nominal front three. 442 blocks are common and reasonably effective game-to-game.

A key graphic is below and showing how these teams who adopt this system can manipulate defensive blocks and creating threat against them. It was always a frustration for the top teams who couldn’t break down deep, defensive blocks but they are beginning to find ways of getting through.

Utilising the fact that teams will first focus on central security, City/Chelsea/Liverpool manipulate opposition blocks. City will load up to three players between the lines to pin opposition blocks to a narrow berth – Chelsea are similar. Liverpool invert Salah/Mane. pic.twitter.com/QjuZEEa3Kp

The short media clip above shows the attacking players, which in Swansea’s case would be Paterson and Ntcham, move inside to occupy space in between the opposition’s defensive and midfield lines. This forces the opposition to defend in a narrow shape and opens up free areas down the flanks for the wingers or wing-backs.

However, the Swans rarely do this. Instead, they prefer to build-up down the flanks and the wide players usually move out wide to support the wing-backs, leaving wide open areas in the centre and the single striker isolated.

We can see an example of this below as we tried to chase a 2-0 deficit at Hull City, who now sit in a deep block to defend their lead.

Hull sat deeper in 2nd half with a 5-3-2 defensive shape pic.twitter.com/5j0USDz3n3

Above, Ntcham, rather than moving inside to occupy space in between the lines in a central area, moves wide to support attacking play down the flanks and to help supply the wing-back.

Jamie Paterson is a player that will do this though and it’s his creativity when doing so that has helped us this season.

Up to now, it feels like Russell Martin is adopting a safer version of his ideal system because of the lack of quality he has in some key positions.

Where Paterson would so often cut inside to link up as we saw in that excellent goal Piroe scored at home pic.twitter.com/D9072MzHDn

In attacking scenarios, further excellent points are made to suggest how the system works in the later phases of attack.

Foden/Sterling’s 1v1 abilities down the line force the opposition defenders to anticipate the threat and pay attention to defending down the line. This in turn generates space for Cancelo in the half space, where he has been a massive threat this season. pic.twitter.com/ll0itULtHw

In the above example, the point demonstrated is how opposition teams anticipate the threat of Foden and Sterling which leaves Cancelo in space to receive.

We don’t see any of this happening against the Swans. We no longer have the quality like Dan James to scare opposition teams and overload the areas he’s playing in.  There’s no real expected threat from high attacking quality players so the opposition’s defensive structure isn’t manipulated or pulled out of shape to leave other players in space.

To back up this notion, here is an example of Cancelo's technical execution from such a zone, alongside another excerpt of @Odriozolite's Expected Threat visualisation. pic.twitter.com/moZsJIQUXb

The best comparison to this is Jamie Paterson’s assist for Obafemi’s goal in the 1-0 home win against Blackburn:

🎶 So come on Obafemi… 🎶 pic.twitter.com/0q1phTvXnu

Paterson might be the only player in the squad currently who could pull off that high-quality, precise cross for Obafemi.

So, to conclude, the 235/325 is a very potent formation which allows teams to establish dominance in most phases of the game, by manipulating the dynamics of each phase using their individual team’s principles.
Any feedback is more than welcome!
(reply/DM – I’m happy to discuss)

The two final points made in the Twitter thread are about counter-pressing. Winning the ball high up the pitch to create attacking opportunities. The Swans do attempt this but unfortunately it’s worked against us too often. There’s not enough energy in the press and we’ve been countered numerous times with teams able to play through it too easily.

So, to conclude, is the system fully reliable on high-quality individuals to make it work? Of course it certainly helps but I wouldn’t say it’s completely reliable on it but it is if it’s to work to it’s full capabilities.

There are some tweaks and improvements surely that Russell Martin could make to help make it more effective. As he’s said before, we need to be braver on the ball. We don’t commit our attackers inside enough to link with the striker to try to help create open space in wide areas. Instead, we add players in support of the wing-backs, the opposition can then afford to overload these areas leaving nothing in the centre.

We have seen that this season though as you’ll see in some of the clips below. Being brave on the ball, looking to play the ball forward rather than taking the safe option, and asking our attacking players to take up more central positions when we have the ball in the opposition’s half.

The 235/325 formation also aims to provide solid defensive protection in all phases of play and this is another huge area that needs improving. The wide centre-backs move far too wide to cover the very high positions of the wing-backs and this creates a lot of problems for us when we lose possession when trying to build from the back.  Do our wing backs need to occupy such high positions during the build-up phase? If only we had Connor Roberts who could afford to get up and down that flank constantly throughout the 90 minutes!

Another area that needs improving is our high pressing. Nottingham Forest, Hull and Huddersfield are three clubs that have scored by playing through our press and there are probably others too.

But when it works, it’s great to watch and we’ve seen it work. Just look at some of the examples below:

In the clip below, we see Ntcham in a more central area playing an excellent ball through for Ethan Laird. Laird had that one v one ability so he didn’t need as much support in these situations.