Sheffield United boss highlights Swansea’s weakness: “We used it to our advantage” 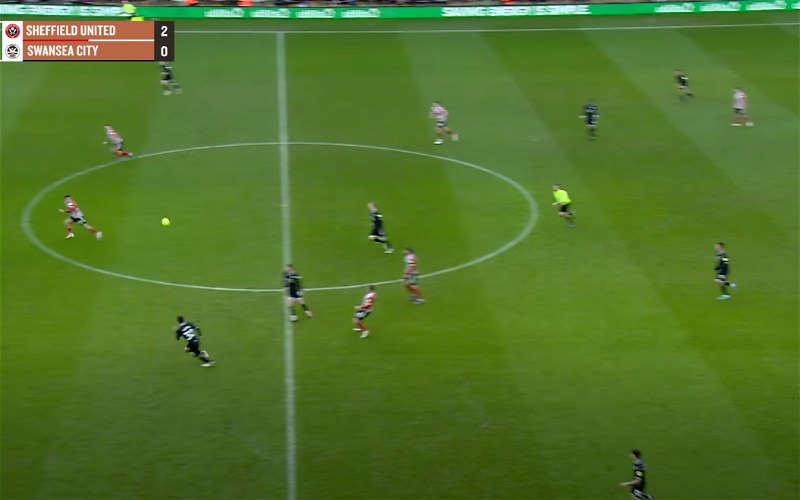 Sheffield United boss Paul Heckingbottom was obviously delighted with his side’s thumping 4-0 win against Swansea City on Saturday and he highlighted after the game how his side were able to take advantage of the opposition’s ongoing weakness and vulnerability.

Whether it’s with or without the ball, Swansea’s shape and openness is causing them serious problems, particularly in away games.

We’ve seen it months ago when we tried to press with very little energy and effort and opposition teams have easily played through us, used the wide-open spaces to create goalscoring opportunities.

Heckingbottom compared this game to the one previously at home when they were held to a frustrating 0-0 draw against Hull City. He explained how the Tigers came to sit back and counter compared to Swansea’s braver approach.

Speaking about different wants to create chances, this time, against the Swans, his side won possession in high areas to create opportunities.

“Sometimes you can get the best opportunities by winning the ball high when a team is split and spread.

Swansea give you that opportunity because they’re so brave with the ball and they’ve got a real strength in how they want to play which is to play out from the back, and we wanted to use that to our advantage.”

The Blades did create chances by robbing us of possession but they opened the scoring from a simple long ball in behind the left side of our defence.

Their second came from build-up play from deep against Swansea’s lacklustre pressing.

Below shows the build up down the right before they switch it over to the left and a cross follows for Baldock to fire home. The big issue below is how both our holding midfielders – the double pivot of Grimes and Downes are out of the game by this point as the hosts enter the opposition half.

A huge space opens up between the defensive and midfield lines with Fleck easily able to run into the space. Gibbs-White also has a free run just inside of the player in possession and with Ntcham playing catch-up…slowly, the Swans are in trouble with no protection in front of the defence.

By the time the ball is crossed in for the goal, we do get players back but as we’ve seen so many times previously, we’re frantically trying to get back into some sort of defensive shape by which point the damage has already been done. 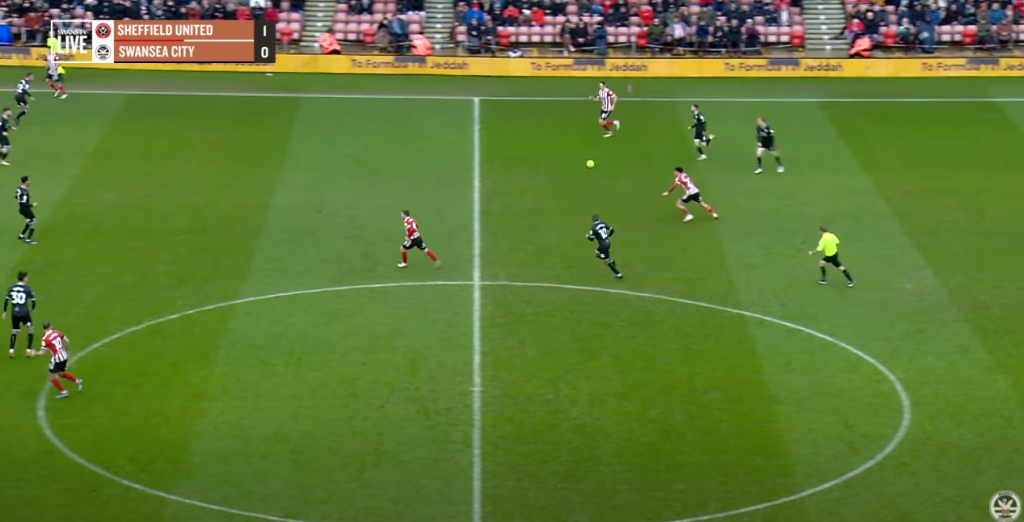 At 2-0 down, Swansea get luck here as our defensive shape issues are exposed again. A big issue for us all season has been our wide centre-backs moving into full-back positions to cover the wide centre-backs but that leaves huge open spaces through the middle.

Possession is lost here as a forward pass is intercepted. One or two passes is all it takes to cut through us to get a chance clean through on goal. Cabango now has the task of dealing with both Sharp and Gibbs-White and fortunately they get it wrong following a back-heeled pass and the opportunity is gone. 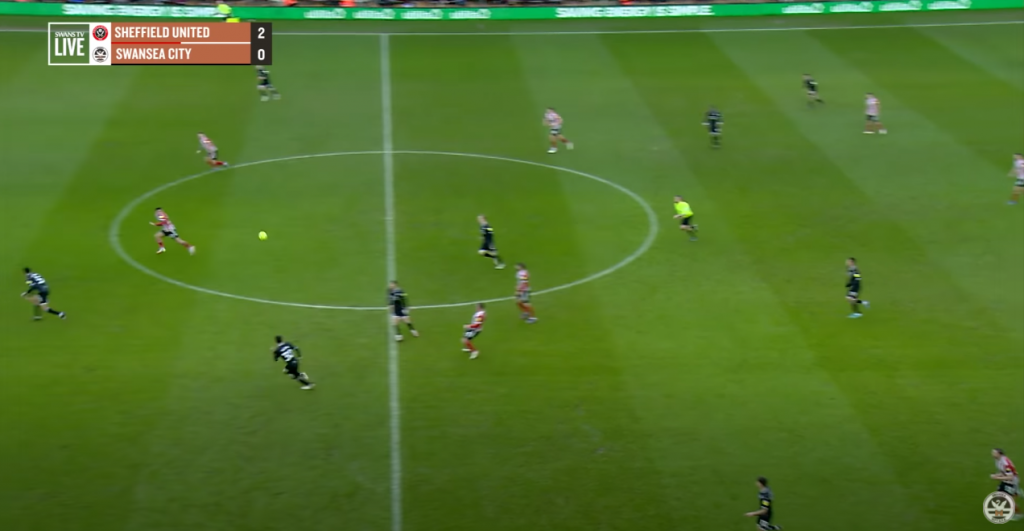 The third goal is a very poor one that Ryan Manning just has to deal with and we see here the weakness of not playing a centre back in that left centre-back position. Firstly, he doesn’t attempt to make the header and allows the ball to bounce behind him. He doesn’t deal with the loose ball and rather than clearing the danger, he allows an opposition to take over and gain control.

The next individual mistake sees Billy Sharp allowed to make a run in behind of Ben Cabango and Sharp finishes beyond Fisher. 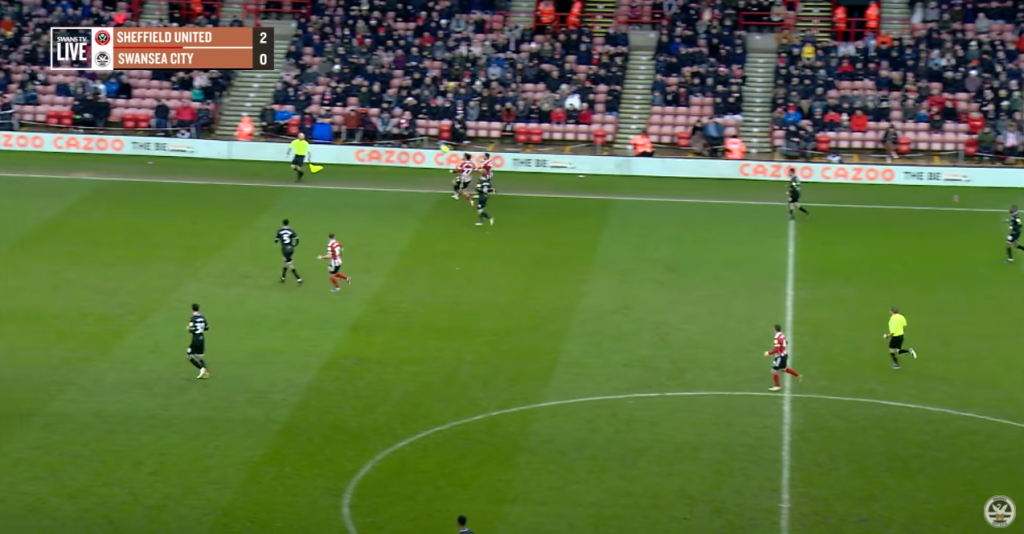 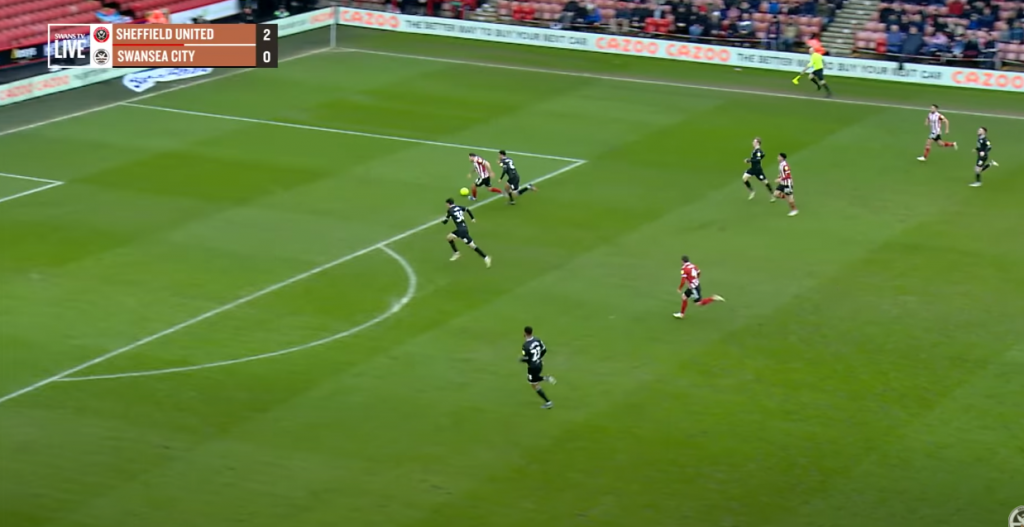 It's a great goal but the pressing is diabolical, half arsed doesn't cover it. https://t.co/n6axFUJqR8

Screen grab from your clip. Huge open space in the centre with not a single swans player in it. Downes then wide, too many drawn to the ball lacking awareness and positioning. pic.twitter.com/qpkfGX6NVD

I would usually write in far more detail with analysis but it was too poor to bare through that task. We’ve seen it time and time again and it desperately needs fixing. The shape is so vulnerable if we play a poor pass. The wide centre-backs need to be tighter and if we are to press high, we can’t allow both our holding midfielders to be pressing high and in the exact same wide position.

We’ve seen these vulnerabilities for months now. Against Nottingham Forest at home it was also a big problem where we also conceded four goals. We pressed high and were easily cut through.

For me, this situation here is the key one for the 2nd. Manning very high, a 5-man press and Forest can easily get in behind them and they're away. https://t.co/0bfNwujuVZ pic.twitter.com/k8zYp4FrZd

In a minute or 2 we see the #Swans struggle to break into Forest's half, and possession breaks down with a poor low pass from Hamer that invites pressure. Space opens up for a counter with Grabban available unmarked pic.twitter.com/fPcKmyXLdD

Afterwards, Luton look to benefit from this again with Bennett in a higher right back position, Downes dropping in and Luton playing a ball over the top to get in behind our defence. pic.twitter.com/0Sml0fU5e3

You can see Bennett's positioning here behind RWB Laird. Downes too has yet to drop back to cover. You can hear the call for the "diagonal" as it's played over to the right. pic.twitter.com/907AKHv8IR