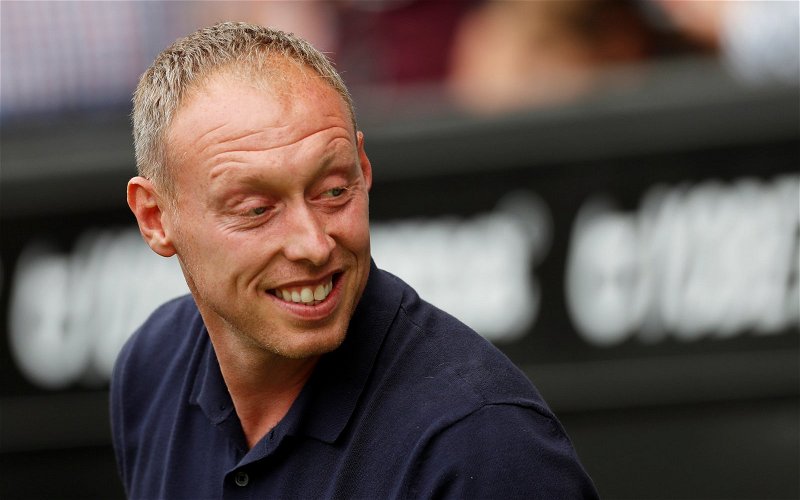 Steve Cooper has received his fair share of criticism from Swansea City supporters lately – for a variety of different things, some justified and some possibly being overly picky.

Larger issues like a clear lack of an identity in terms of a style of play being the main one along with a large number of poor performances and a lack of tactical nous in games.

But just when you thought Steve Cooper might have turned a corner on his lack of tactical nous following his switch to a back three system, he still continues to draw in the criticism for another criticism that keeps coming his way – his lack of game management and use of substitutes.

It’s fair to say that this season Cooper hasn’t exactly been like Graham Potter with his flexibility in terms of tactics and formations. He’s favoured a 4-2-3-1 for a large part of the season before flirting with a 4-3-3 when he finally realised his midfield was a big problem out of possession.

He reverted back to a 4-2-3-1 for the season restart last month but that didn’t last long before he was somewhat forced to go with a lack three having only one fit centre-back in young Marc Guehi available. He was joined by two fullbacks either side – Kyle Naughton and Jake Bidwell against Sheffield Wednesday at home. Despite a woeful first-half display, we got our chase to a play-off place back on track with a 2-1 victory against Garry Monk’s side.

Fortunately, despite welcoming Ben Cabango back to his defence for the trip to Birmingham City, he stuck with a back three and rightfully so in our opinion as we pointed out in the article linked below.

After a 3-0 win at Birmingham City and an excellent performance to boot, we had to give Steve Cooper his dues and praise him for switching systems and making us look like a decent passing team again. Our possession hadn’t flowed for many months prior to the trip to St Andrew’s. We had looked disjointed and against Luton especially, we looked like a newly formed side who had no idea what they were supposed to be doing. You couldn’t say that at all about the performance at Birmingham.

The same could be said for our efforts against Leeds. We didn’t create much against the table-toppers but teams usually don’t. It was pleasing to see us take the game to the league leaders and stifle them – which we did.

However, just when you thought Cooper had turned a corner and got us playing again, he’s shot himself in the foot.

And not just during the game against Leeds either, but the one at Birmingham City too just a few days earlier.

His lack of substitutes. It still baffles me why he didn’t make a change until the 82nd minute during a game that we were cruising in. Then, he names an unchanged side against such an energetic and demanding side as Leeds where – yet again – he didn’t use his subs until the 81st minute when you could see from around the 70th-minute mark we were struggling to cope as Leeds grew stronger in the game.

Late goals have been a big problem this season as the image below shows (soccerstats.com) and they have cost us points this season.

Would fresh legs have prevented a quality player like Pablo Hernandez to not score his 87th-minute winner? Very possibly not but this isn’t a one-off by any means. It leaves you asking the question as to why Cooper doesn’t look to his bench more. Does he not trust his replacement options to do a job? 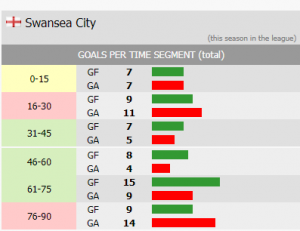 Hopefully, Cooper has turned one corner by finding a system that works for his squad and allows them to play a better passing game but he definitely needs to turn another now by making better use of his subs and trying to improve our defensive record in the final 15 minutes of games.

A lot of fans are also calling for Cooper to be let go at the end of the season. They are entitled to that opinion, of course, but I can’t help but feel that the in-or-out debate is pointless when there’s surely absolutely no chance that the club decide to relieve him of his duties when the campaign comes to an end.