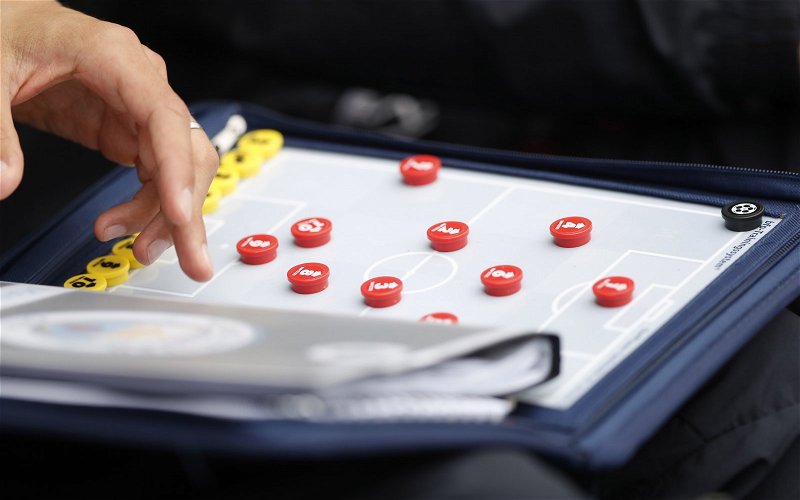 Steve Cooper sprung a surprise before Sunday’s 12pm kick-off at home against Sheffield Wednesday, adopting a back three system for possibly the first time in his coaching career.

Usually favouring a back four, either a 4-2-3-1 or 4-3-3, the Swans coach was forced into a switch-around with a lack of available and fit centre-backs. Mike van der Hoorn was lacking match fitness while Ben Cabango was struggling with an on-going hernia issue. Ben Wilmot’s injury and his return to his parent club Watford meant that Cooper had to make do with Chelsea loanee Marc Guehi as his only available centre-back.

It was a difficult return to the starting line-up for the promising youngster, having not played in months and having to lead the backline with two fullbacks either side of him but he came through it superbly, earning the man of the match award for a very solid and assured display beyond his years.

The Swans started the game in this shape:

The double pivot midfield duo of Matt Grimes and Jay Fulton remained with Gallagher staying in his free number ten role behind an attacking duo of Rhian Brewster and Andre Ayew. Ayew operated in wide areas during the game, so too did Brewster at times meaning Gallagher had to push further forward through the central channel.

The back three and wing-back system arguably suits Connor Roberts the most out of any other outfield player in the squad. He’s been chosen sparingly this season at right-back with Cooper opting for Kyle Naughton, likely because of his reluctance to push into the final third and his defensive positioning and discipline.

However, a wing-back system benefits Roberts as he’s finally given that freedom to attack down the right and there’s less of an emphasis on the defensive side as Kyle Naughton was often defending in a right-back position.

This did, however, lead to some issues early on that Sheffield Wednesday failed to exploit. With Roberts pushing forward and Naughton covering behind him, this meant that our defensive unit was shifted across to the right side, leaving space on the left. This leads us on to the main subject of the article heading, the one position we need to fill if we want a back three to work. Wayne Routledge, a 35 year-old winger as a wing-back was never going to work and was demanding a lot of him to get up and down that left side. Wing-backs need to be athletic and that’s why Bidwell is more suited to a full-back role.

The performance in the first-half was woeful so you may be wondering why would we argue about a back three when, once again, it didn’t really work. Yet it can work with the right blend of players in the squad. We have to remember that we wouldn’t normally be playing with three full-backs, two of which starting in the centre of defence. If we look at how it could work, you can see that it looks better balanced, it’s just that one position that we need to fill:

You could even switch it slightly in midfield as I feel that Grimes could also benefit by supporting our left side further forward, this would allow Ayew to move inside as a central threat. I’ve always thought that Ayew could give us more by playing in the middle. He helps the ball to stick and we struggle to do that in the centre.

The below sees similarities to the period when we switched to a 4-3-3, playing two midfield eights. Gallagher himself said he suits a number 8 role compared to a number ten.

Sheffield United would be the first team I’d point our readers in the direction of when promoting the benefits and effects of a back three. It allows one ball-playing defender the freedom to bring the ball out of the defence. Mike van der Hoorn, who unfortunately is set to leave the club soon after his contract expires would relish that role and freedom. Joe Rodon could also do it in his absence but he too could be sold to a Premier League club providing his injury is nothing too serious.

It would also help us in midfield. We’ve suffered greatly in midfield all season and you could find plenty of evidence throughout the year of our midfield duo leaving space in behind them, and exposing our two centre-backs. So much so that Steve Cooper felt the need to switch to a 4-3-3, playing two midfield 8’s either side of a deep-lying six. The back three gives the freedom for one of the three centre-backs to step out and into midfield to help when needed.

With wing-backs pushing forward, a back three is covered by the team temporarily switching to a back four, as we saw on Sunday. Simply, a defensive midfielder, like Jay Fulton could drop back to form a back four when required.

The system also has the benefit of a front two. Of course, you can decide to go 3-5-2 or more midfield dominant with a 3-1-5-1. There’s a few ways to go about it. Whilst we didn’t see it against Sheffield Wednesday as Ayew covered in wide areas, he could join Brewster up front if we possessed an athletic left wing-back.

Declan John is the only current option to play at left wing-back but he’s currently on loan and again, he’s failed to make his way anywhere near the first-team. Like, Roberts, he’s far more suited to a more attacking wing-back role.

The back-three is most likely a one-off to cover the centre-back shortage but I still think it could work and fix some issues if we can find a god left wing-back.