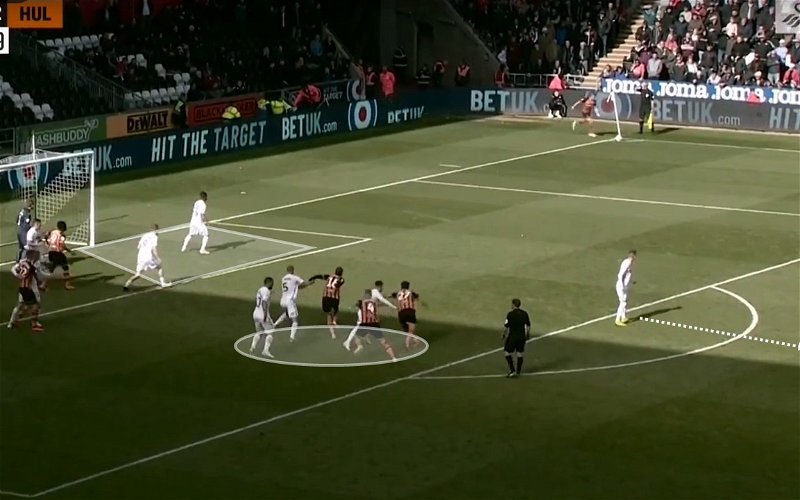 I didn’t expect Potter to move away from his zonal system when defending set pieces but that’s exactly what he did in Saturday’s 2-2 draw against Hull.

We’ve conceded an incredible 16 goals from corners this season, with 22 in total from set pieces (throw-ins, direct and in-direct free-kicks). It’s been such a huge weakness for us this season that we’ve already written a few articles on it, including a two-part analysis on our recent struggles against corner kicks. You can read part two via the link below:

Up until this weekend, Potter has adopted a zonal marking system which has come under  a lot of criticism which is why we’ve felt the need to write so many articles on it recently.

Below is a screenshot from the analysis at the link above as we attempt to defend a corner using zonal marking in the home defeat against West Brom.

They key here is how Connor Roberts fails to do his blocking job on the runner and goalscorer as he makes his way towards the six-yard box. He gets a free run and finds the net. 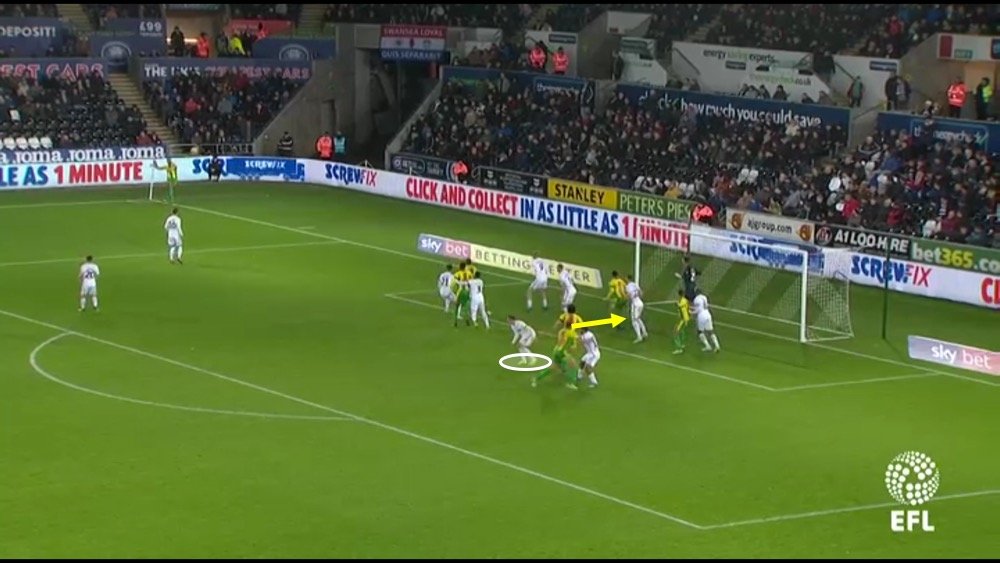 You can also see a similar thing occur in the away win at Millwall below. Watch the slow-motion video as the goalscorer can, again, get past Connor Roberts and into space to head home as van der Hoorn also loses out at the far post.

Not so much recently, but an issue with our earlier corner defending has been poor blocking in penalty area. At Millwall, we easily allowed the goalscorer to get past and head home unmarked. #SetPieces #VideoAnalysis #Swans #SwanseaCity pic.twitter.com/Sj3Au4QKvf

The Swans had started the season off well in terms of defending corners, conceding just 2 goals in the first 12 games, one of was the one above at Millwall and the other was in the 3-2 home defeat against Ipswich Town.

So 14 of our 16 goals conceded from corners this season have come since our 19th match (26 games), an average of a goal conceded from a corner every 0.54 games. You can come up with your own conclusions as to that steep decline since match 19, the goal rate has increased steeply since Nordfeldt has returned in goal and Joe Rodon has been out injured but you would need to look at each goal in depth to see the key mistake(s) for each one.

The near post area has been a weak point for us and we’ve needed to add extra cover in that area as more and more opposition teams are targetting area with similar in-swinging crosses.

In the first example below of a defensive corner against Hull, we can see a different setup inside the penalty box. Previously, we’ve seen the two centre-backs occupying important zones inside the six-yard box near the goalkeeper but here they’ve steppe right outside of that area to man-mark more than 12 yards from goal.

It’s worth pointing out here that in the screenshot, we can see 3 vs 4 man-marking in the shaded-circle but by the time the corner-taker sends the ball in, Jay Fulton has come across to make it 4 vs 4. 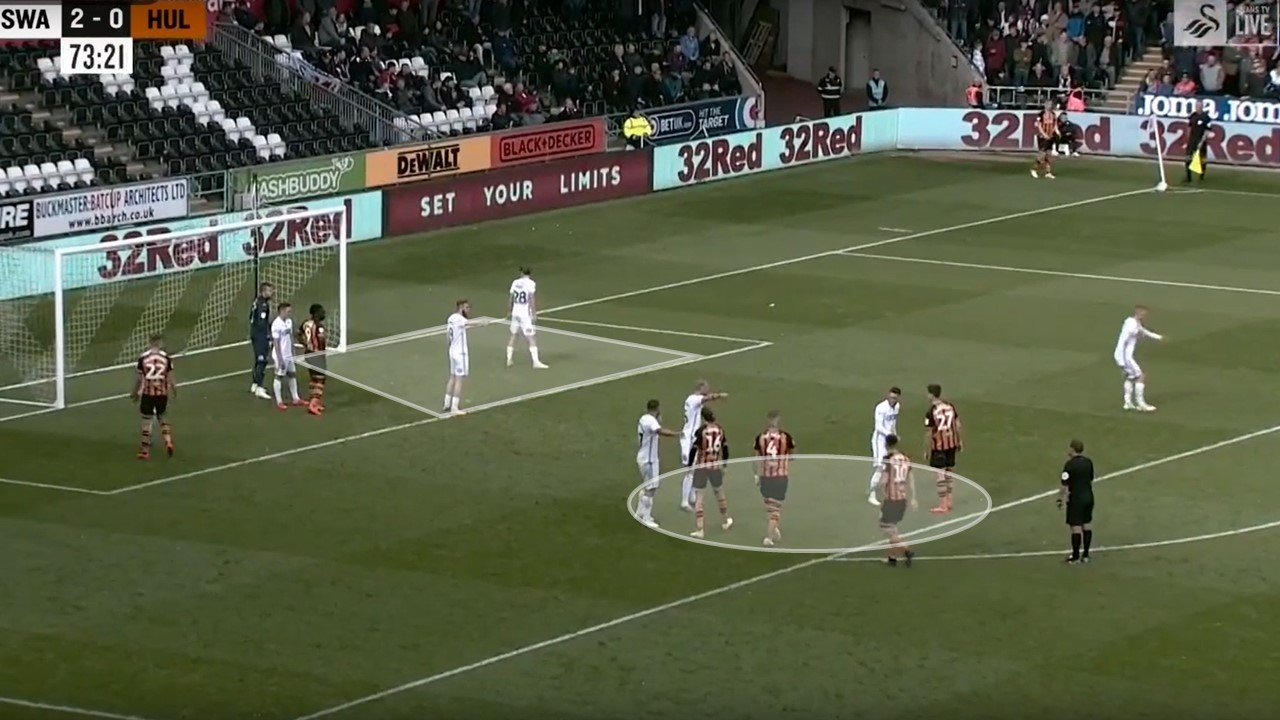 You can watch the corner below:

For another article on our corner defending. #Swans changed their approach vs #HCFC , opting to man mark the runners inside the penalty area. #analysis #swans #twitterjacks #slowmo pic.twitter.com/FlAzGSkGdq

Another corner below, Swansea City again get close to their markers close to the edge of the penalty area. 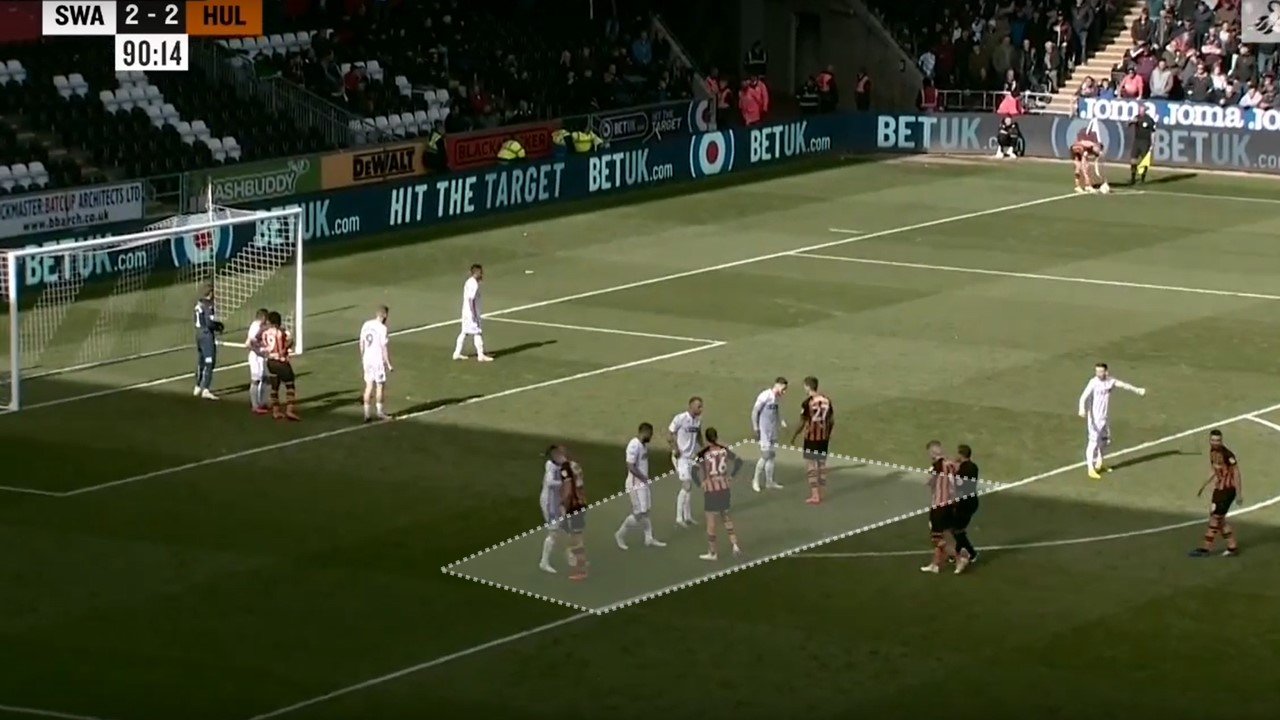 As the cross comes in, Hull City players aim to lose their marker as they make runs towards the near post – Swansea’s main weak area of late. This time, the corner is aimed towards a central area inside the six-yard box, a Hull player makes contact but his header is glanced well wide of the target. 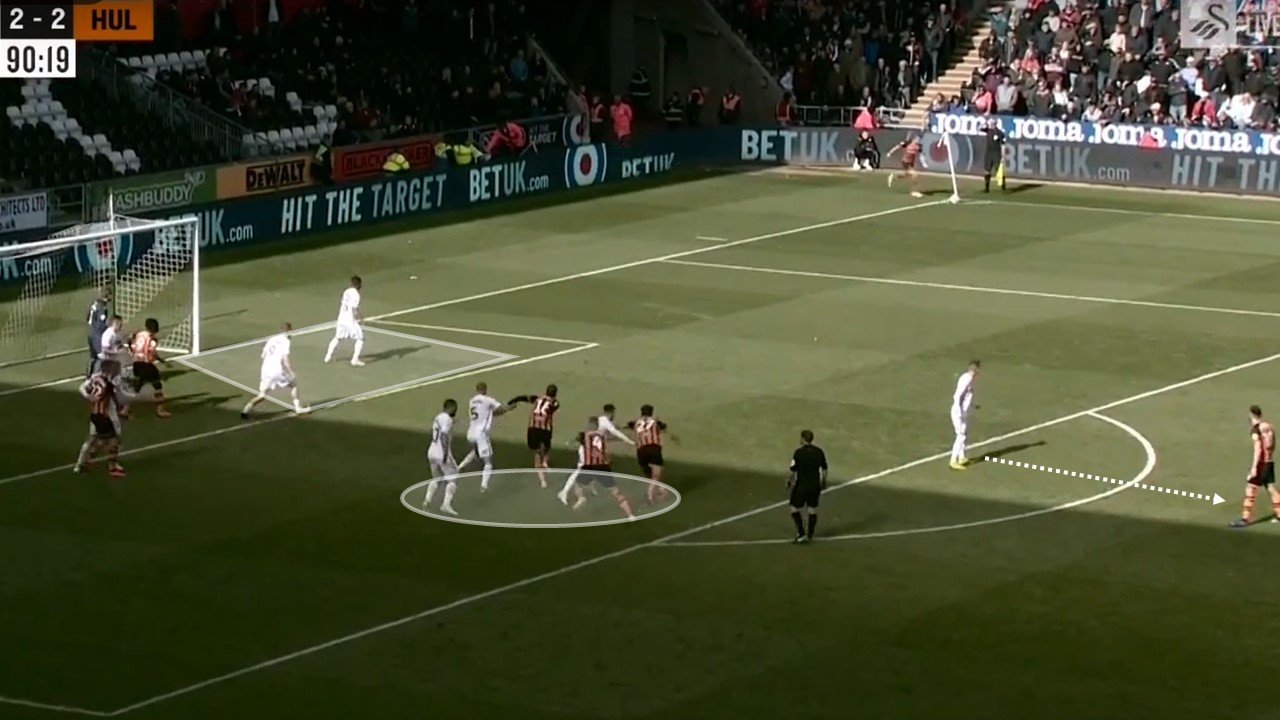 Another corner vs #HullCity . An in swinger aimed at a central area in the 6-yard box. Same man marking set up again, a Hull player makes contact this time but effort goes well wide. pic.twitter.com/mBDgCIbKEU

It’s too early to make a judgement as to whether the switch to man marking will solve our big weakness but it’s at least encouraging to see Graham Potter and his coaching staff being pro-active and trying something different. It’ll be interesting now to see how we approach defending corners on Wednesday night at home against Derby County.