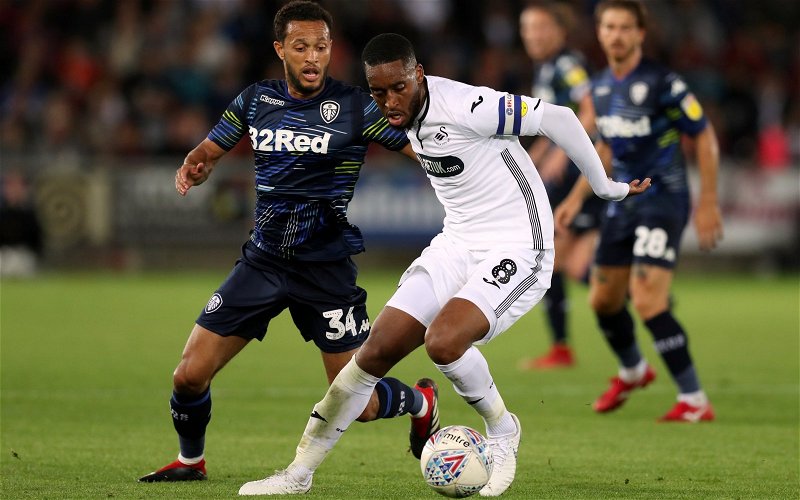 Graham Potter has revealed that Leroy Fer has been ruled out by a further knee injury for at least 8 weeks. It is now time to seriously consider whether we have seen the last of Fer in a Swansea shirt.

Beginning the year as one of the few consistent cogs in Graham Potter’s rotations, the club captain has been almost entirely ruled out by injury since late January. With his current contract set to run out this summer, could this latest serious knee injury signal the end of his time at the Liberty Stadium?

Despite being highly regarded as club captain for his experience and off-field influence, Fer’s absence has allowed the fledgeling partnership of George Byers and Matt Grimes to establish themselves as Swansea’s first choice midfield pairing to moderate success. In what has been a year of impressive performances from the young squad, Grimes in particular has stood out.

His injuries notwithstanding, whether Fer has shown consistent levels of performance enough to warrant one of the midfield slots could certainly be questioned. On his day, Fer is strong, authoritative and impressive. The problem is that these days have been few and far between and on a bad day, the Dutchman can look slow, non-committal and disinterested.

Off the field, the temptation for new chairman Trevor Birch to take Fer’s Premier League wages off the bill must be huge. Graham Potter has shown significant ability in developing young players, so it’s not hard to see Swansea recruiting a younger, cheaper option in the summer window.

There is no doubt that Leroy Fer is a player whose commitment and effort should be appreciated, especially following relegation to the Championship, and he brings a high level of experience to a young squad. But this might just be the time to say goodbye, for the good of all parties.

Selling Dan James to Leeds would feel like a betrayal

It looks highly unlikely that Leroy Fer will be offered a new contract, especially given his wage demands which will be above the new wage cap that’s been implemented and his injury history.

Graham Potter and the club especially are looking to rely more on youth as they tend to cost less and will help to see a continual reduction in the wage bill. Although I’m sure,in an ideal world, Potter would prefer a combination of both youth and experience.

Fer does have useful attributes on his day,  but like Nathan says above, the days we see them are too few and far between. His fresh injury, sidelining him for 6-8 weeks, won’t help his progress in finding a new club for the new season either and surely we have to look ahead to the future.