Wednesday’s win was great… but Swansea have a play-off semi-final tomorrow! 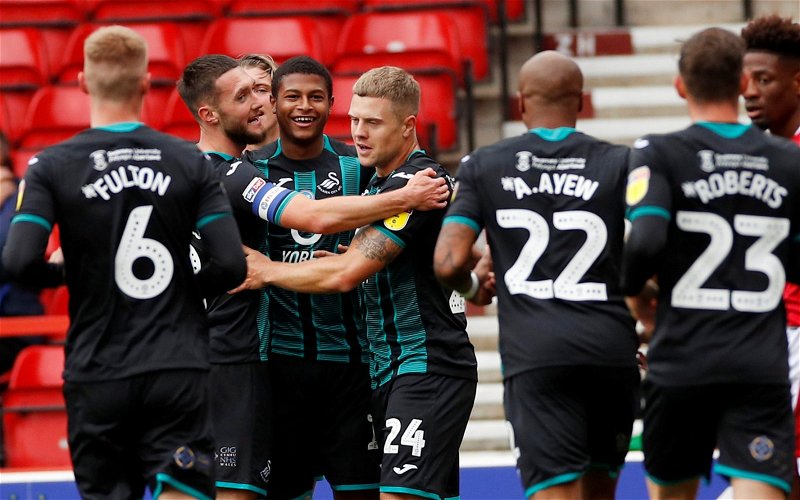 On Wednesday, Wayne Routledge netted in the 91 st minute to provide the Jack Army with the highest of highs as he sent the club into the Championship play-off places against all the odds.

Going into the game, it looked as if the Swans would have to rely on the league’s crisis club, Hull City, to pull out all the stops and beat Cardiff City to give Steve Cooper’s men a shot at sixth spot. But, as it transpired, it was in-fact Stoke City’s unfathomable 4-1 win at fifth-placed Nottingham Forest that coupled with Swansea’s 4-1 at the Madejski Stadium to culminate in an extended season for Swansea, and the misery of seventh place for Forest. An unthinkable turn-around had occurred and, while fans will still be reveling in Wednesday’s glory, Swansea City now have a play-off semi-final first leg tomorrow!

As the sixth-placed side, Swansea will go up against the third-best side in the division – Brentford.

Thomas Frank’s Bees agonizingly missed out on an automatic place in the Premier League in midweek, as they were defeated 1-2 at home against Barnsley – a result that would go on to secure the Tykes’ second-tier status. This shock result came following a 1-0 defeat to Michael O’Neill’s resurgent Stoke City side – meaning that Brentford had passed up two opportunities to overtake a stuttering West Brom team, who went on to stagger into second place with a 2-2 draw against Queens Park Rangers. A win in either of their last two games would have meant automatic promotion for the Bees.

Brentford’s successive defeats have led to the mentality and bottle of Thomas Frank and his players being questioned, and many are suggesting that Brentford could find it hard to recover in time to overcome a Swansea side no doubt high in morale. What no one can question, however, is the quality of Brentford’s side and the damage that they can cause to anyone when at their best. This is in no small part down to the attacking threat posed by the infamous ‘BMW’ front three of Said Benrahma, Bryan Mbeumo, and Ollie Watkins – who have scored a combined five goals in two games against the Swans this season. The dynamic trio have scored a staggering 57 league goals between them this season, providing 71.25% of the total goals this season for the league’s top-scoring team.

It’s fair to say that, when in full flow, Brentford are a force to be reckoned with.

But maybe Swansea aren’t going to play a Brentford side in full flow. Missing out on automatic promotion in the fashion in that they did will undoubtedly have psychological effects on the players and coaches alike. They will have known that facing Gerhard Struber’s Barnsley side would be no walk in the park, but they will still have expected themselves to win. Picking the players up off the floor and motivating them for a play-off campaign will not be easy, and may turn out to be impossible. History suggests that finishing third gives Brentford no advantage at all, as just 4 of the last 10 teams to have finished third in the Championship have gone on to be promoted at Wembley.

Of course, Brentford will want to buck that trend and are more than capable of doing so, but it certainly won’t come easily.

As for Swansea, well, not even the most optimistic member of the Jack Army will have expected the club to be in this position after 46 games. Steve Cooper and his young squad have played their best football of the season since switching to a three-at-the-back formation, and results have been

coming as well. Swansea have accumulated four wins, one draw and one defeat since the change of system – with the draw being in a game that they were unlucky not to win at Nottingham Forest, and the defeat a 1-0 loss at home to the eventual champions, Leeds United. There are simply no expectations on Swansea City to win the play-offs, but that in no way means that they don’t have a chance. They’ll be riding the crest of a wave after their shock entry into the top six and confidence will be oozing out of the players.

And, like Brentford, Swansea have quality too. The ever-reliable Andre Ayew and his superstar partner Rhian Brewster have proved to be a formidable strike force since being put up top together, while Conor Gallagher provides plenty of energy and endeavor in the number 10 role, with Matt Grimes his usual slick, stylish self behind them. Swansea didn’t fair well in their two league games against the Bees as they were defeated 0-3 at the Liberty and 3-1 at Griffin Park – the stadium where Swansea will play in its final ever game.

Long story short, all of the pressure is on Brentford in this tie, and that is exactly the way Swansea City will have wanted it. We’re in for a manic, nerve-racking four days while the semi-finals are played out, that’s for sure.

After what Swansea did on Wednesday, there’s no reason not to think that anything can happen in the next week or so. These are the playoffs, after all, and Swansea fans more than anyone know of the magic that the four-team competition can provide!