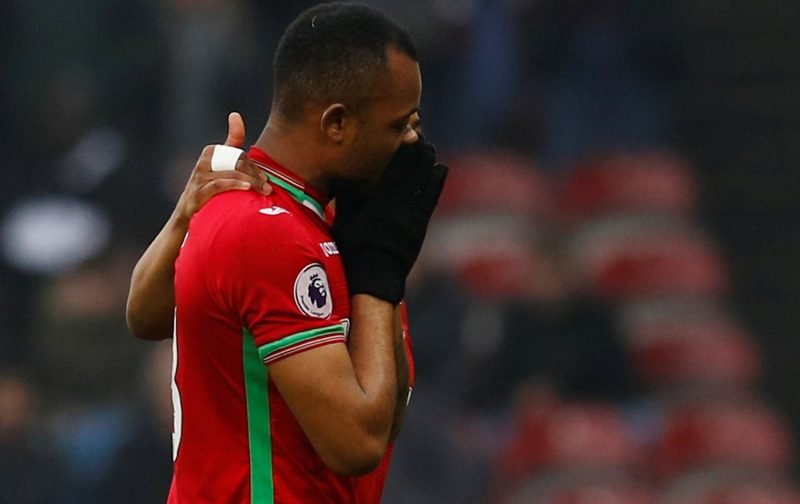 Having read a quote today from Jordan Ayew’s spokesperson that they were looking at offers from Premier League clubs, I posted it on Twitter and it didn’t take long for Swansea City fans to make their feelings known about the news.

It quickly became obvious that our supporters really aren’t bothered by the fact that he looks set to leave before the season starts as these tweets perfectly sum up:

“I can assure you that Jordan Ayew will leave Swansea City before the summer transfer window comes to an end,”

“We have received offers from other clubs but we are considering the Premier League clubs,”

Well, that’s interesting. They’ve received offers from other clubs? I didn’t think that was possible until a bid had been agreed between two clubs? They sound as if the player is out of contract or something?

But anyway, Jordan Ayew came to life for a decent spell last season but you can’t forget his forgetful first half to last year’s awful campaign. Like his brother Andre, it’s difficult to work out his best position. He’s played on the wing as well as up front and it’s probably there where he’s most useful. He can be a frustrating player at times but he does have his moments when he shows the ability to change games with some superb finishing – but usually, too much time passes between those instances.

A player that likes to run, dribble and go it alone far too often for my liking and given Potter’s desire to have young and hungry players that genuinely want to play for the Swans, the best thing to do would be to cash in on him to allow new recruits to come in.

Nmecha at Manchester City has been linked with a season-long loan move and an out-and-out striker – which Nmecha is – would be brilliant as competition for McBurnie – not forgetting Bony too who’s due to return from injury in October. It also looks like we’re covered on the flanks with Celina and McKay confirmed today.