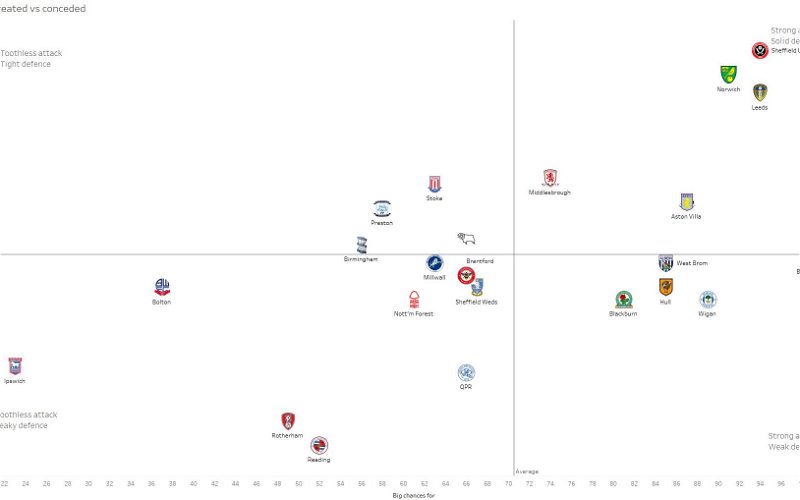 Big chances is an interesting and basic key stat that helps to understand how creative teams are as well as how clinical they are during a football season.

Expected goals or xG has grown in popularity but it still remains very much like marmite where fans either love it or loathe it. Many argue that it’s too complicated and it’s decimal values confuse some people so the simple mention of the term ‘xG’ might see some stop reading at this point.

Therefore, big chances is a much simpler stat to look into. Like goals, essentially, big chances are binary – 0 or 1 rather than xG which can be a 2 decimal number ranging from 0 to 1. Big chances are defined by opta as follows:

A situation where a player should reasonably be expected to score, usually in a one on one scenario or from very close range when the ball has a clear path to goal and there is low to moderate pressure on the shooter. Penalties are always considered big chances. – Opta

So, these are chances where you would expect a player to score. The advantage of looking at big chances only rather than xG is that you’re filtering out all shots with a low expectancy of being scored such as direct free-kicks, shots from corners and other low-scoring chances. Looking at only those ‘big chances’ helps to understand which teams are the most creative and clinical.

Looking at the numbers and the best performers, it’s clearly worth looking into big chances because the top 3 finishers in the Championship – Norwich City, Sheffield United and Leeds are in a class of their own.

The two promoted sides, Norwich City and Sheffield United are both in the strongest quadrant in the chart below which shows big chances created vs big chance conversion rate.

Swansea City created a high number of big chances but like Bristol City who were left to rue being wasteful as they missed out on the play-offs, their conversion rate was below the 40.58% league average.

Hull City also created a high number of big chances with an excellent conversion rate, so why did they only finish in mid-table? The Big chances conceded chart might suggest why. 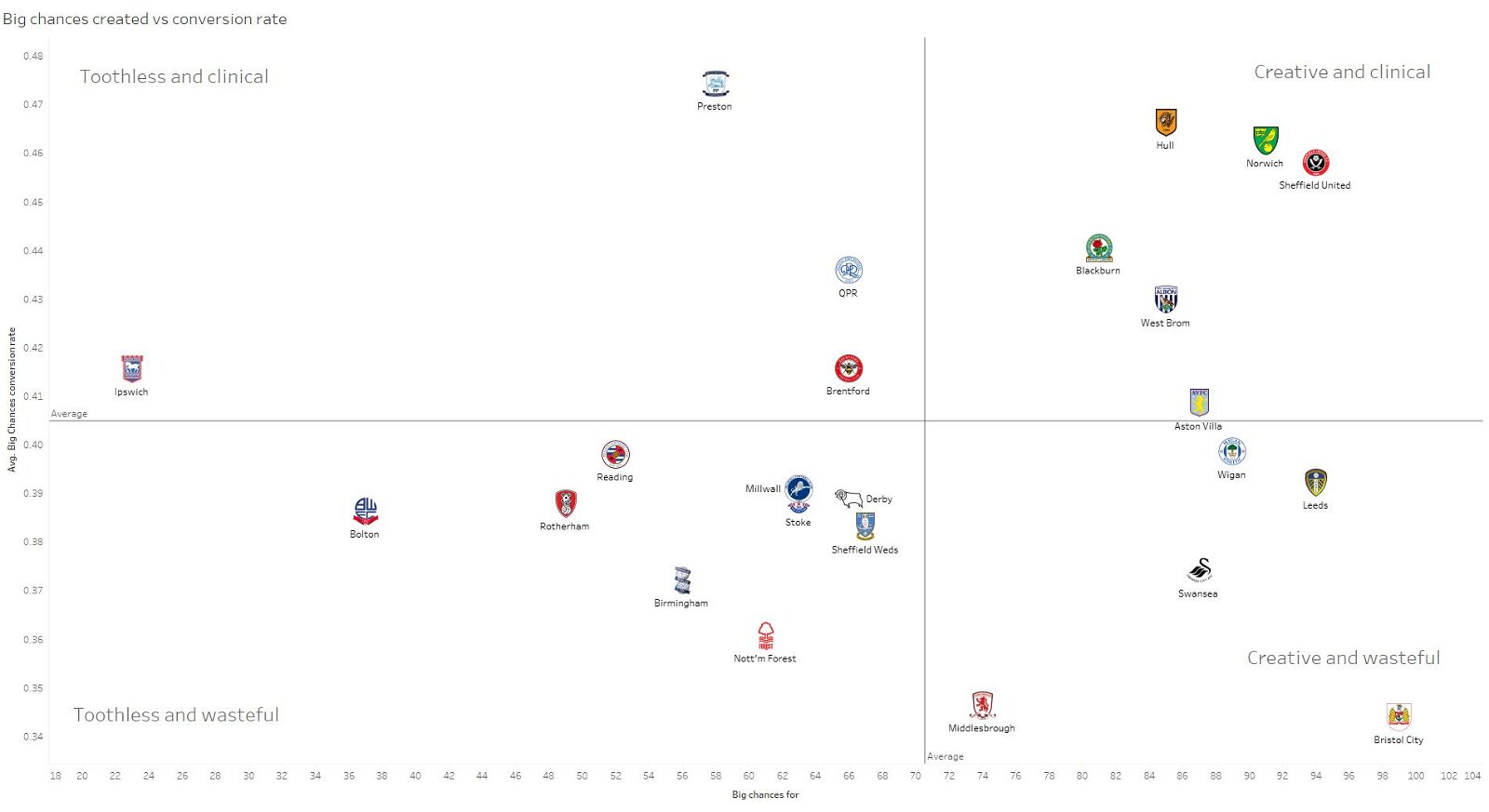 (Click the charts to view the full size version)

Creating a lot of big chances and converting them coincides with finished league position somewhat but a better comparison is to look at the big chances created vs conceded numbers. A tight defence is just as important as a potent attack.

The below chart is where we can see the top 3 sides in a league of their own. Sheffield United, Norwich and Leeds all creating a large number of big chances as well as conceding very few – the perfect combination to success. What let Leeds down was their very poor conversion rate.

Swansea City are hidden behind Aston Villa on the chart below with identical numbers for the 2018/19 season.

Just like the top 3, the bottom 3 teams are also collected in the worst performing quadrant in the below chart – Ipswich, Bolton and Rotherham United who all created few chances and conceded a high number. 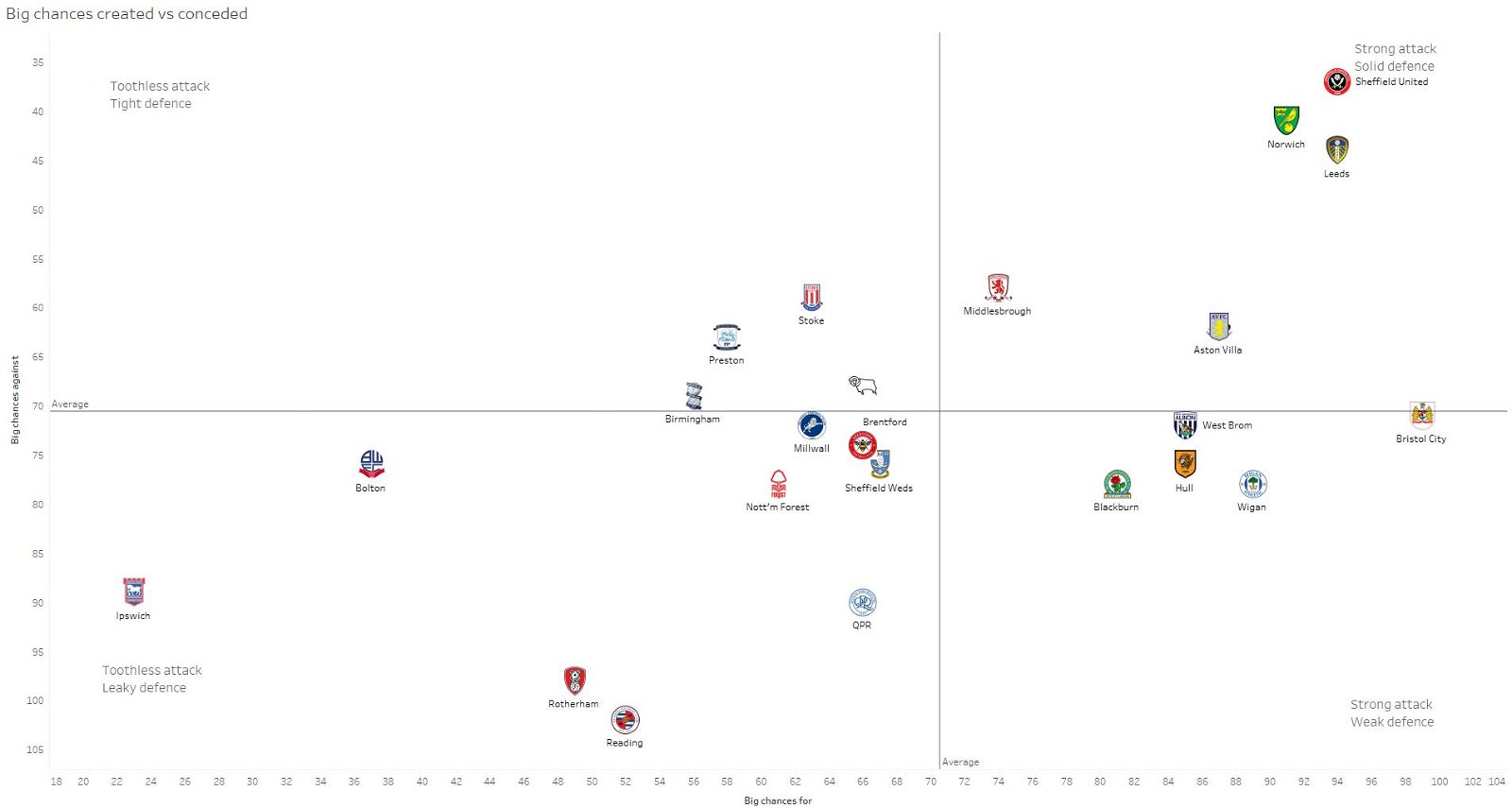 Only around 0.3 big chances created against Nottingham Forest were scored. The likes of Ipswich and Stoke were the worst performers with opposition sides, on average, scoring around half of their big chances against these two. 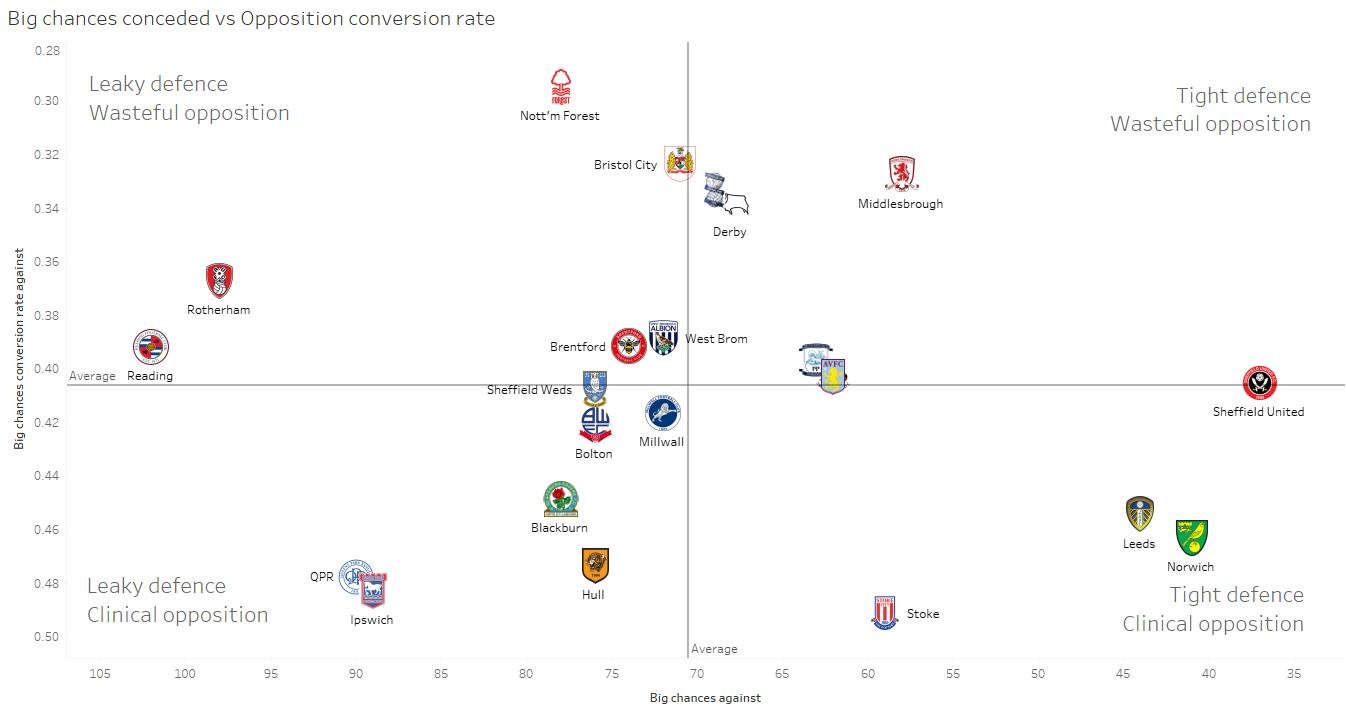 Breaking these numbers down further by individual player for the Swans and we can see how important Oli McBurnie has been this season. He’s converted 57% of big chances, much higher than the 40% league average. More worryingly though is how only one other player – Wayne Routledge achieved a higher than average big chance conversion rate.

The horizontal average line shows the average conversion rate for Swansea City – less than 30% – a number than has to vastly improve next season.

Bersant Celina had the second highest number of big chances (11) but converted only 1 of them. Going by averages, McBurnie would have converted 5 or 6 of them and the league average suggests he should be scoring at least 4.  Dan James is also another player that has to be more clinical, scoring only 1 of his 8 big chances. 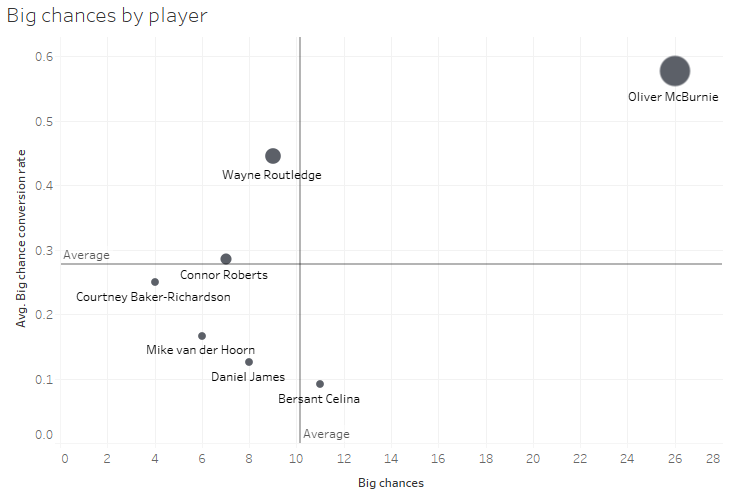 In summary then, we can see that there is definitely a correlation between big chances created vs conceded and the conversion rate of those created. The Swans were better than average defensively, but they need to improve, be more clinical and take their chances.

As Swans fans and haven’t witnessed us this season, you don’t need these stats to know that we haven’t taken enough chances in 2018/19, but the stats still help to see just how we compare to the other 23 sides in the division and just how far behind we are compared to the average and the pace setters.