The Key Stats Behind Swansea’s Dominant Winning Display Against Reading

Swansea City produced another dominant display to get a second home win in five days as Oli McBurnie ended an 8-game goalless run to net a brace against Paul Clement’s Reading.

Potter’s side had their best spell in the first half with 71% possession, 13 shots and three ‘big chances’ created. Reading came back into the game in the second half but barring the need for a few crucial sliding tackles from Mike van der Hoorn, goalkeeper Kristoffer Nordfeldt wasn’t put under any serious pressure.

Swansea’s possession dropped to 56% possession in the second half but they improved in attack, managing another 12 shots – 6 of them on target.

It was also another impressive passing display too with the Swans achieving 89% passing accuracy (91% in the first half) with 582 of their 654 attempted passes successful.

The pressure graph below, courtesy of the SofaScore app, shows the pressure timeline from 0-90 minutes – left to right. The green bars show Swansea City’s pressure, with Reading’s in blue. Our pressure dropped considerably in the second half as Reading improved with two better spells but we were finally able to kill the game off with 6 minutes of normal time to play.

The expected goals map below, courtesy of infogol, shows that the 2-0 scoreline flattered Reading and the Swans really should have added more goals to their tally. After all, 5 ‘big chances’ were created according to SofaScore – these are chances you would expect to be converted into goals. One of these was the penalty that was converted by Oli McBurnie. 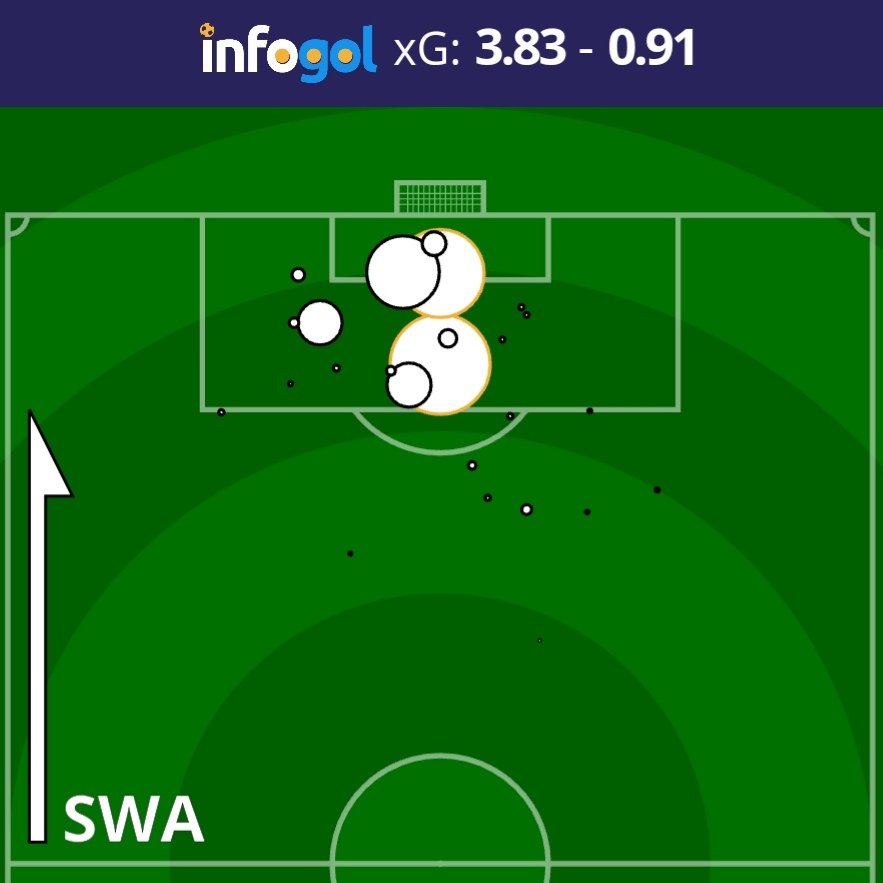 Like we did against Ipswich, we again created a number of excellent chances all in front of goal and within 12 yards of it. The map below shows our chances on goal with the bigger the circle the higher expectancy of scoring. Other than the goals, our 3 other key chances were Dan James’ curled effort that was missed on 13 mins (0.34 xG), McBurnie – 76 minutes (0.56 xG) and Celina – 41 mins (0.34 xG).

For Reading, they created a heap of low goal expectancy chances, with their best chance only having an xG rating of 0.12.