The Americans Can Forget Huw Jenkins, They Need To Take Footballing Advice From Curtis, Britton & Co. 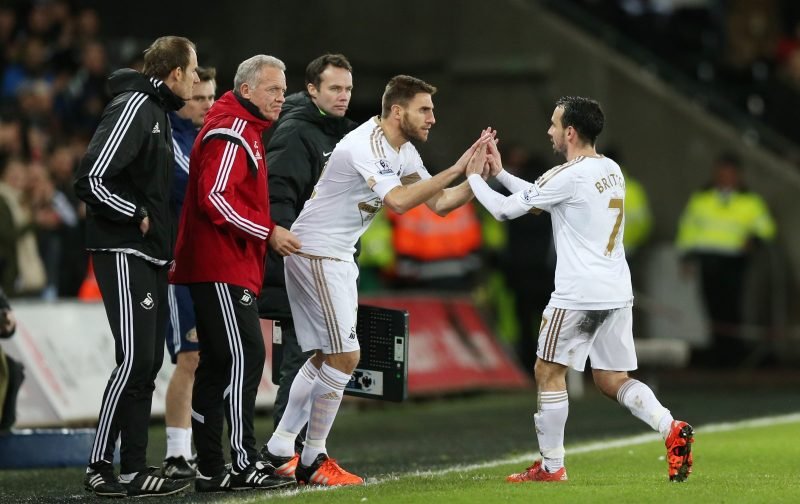 If there are two people at the club who know all about the ‘Swansea Way’ and what’s needed to re-build and re-establish our brand of attractive football, then it’s former players Alan Curtis and Leon Britton.

Whenever you hear the pair talking about the club, whether it’s the style of play, the reasons for our relegation or how we need to rebuild in the Championship next season, they always offer an honest opinion as to what is required to restore some solid foundations for the future. They speak and sound like supporters and it would be madness to pass up what crucial advice and ideas they could at least offer as part of our Summer re-planning work.

Alan Curtis first played for the club when he was 18 back in 1972, spending 7 years in his first spell before playing for Leeds United, returning for a second three-year spell in 1980. Curtis’ third spell during the 1989-90 season was his last before returning to the club later as a first-team coach. He’s been at the club ever since, experiencing the highs and lows and the many managers that have been and gone. Mr Swansea City, you could call him and surely it’s only a matter of time before his statue will be erected outside the Liberty Stadium alongside that of Ivor Allchurch.

Curtis is now working with the loan players, rather than a first-team coach after he was relieved of his duties when Paul Clement was appointed in January 2017. A manager is more than entitled to decide on his own backroom staff, but the club could have handled it better after it was revealed that Curtis was simply notified via text message that his long-standing coaching role would come to an end.

Leon Britton bid farewell to the club as a player this month, hanging up his boots after spending almost 15 years at Swansea City over two separate spells – playing at every English professional level for the club since his move from West Ham back in December 2002.

The midfielder has been at the heart of everything since those darker days just after the millennium and played a key role in our journey from the bottom to the top. Britton knows exactly what it’s taken to get to the Premier League, and how our attractive brand of football was born in 2007 thanks to former boss Roberto Martinez. That philosophy has been a crucial and integral part to our success, but that brand of football is now nothing more than a distant memory, and we’re all longing for its return. I’m sure many of us share Leon Britton’s view that patience will be key, rather than simply looking for a quick return to the so-called promised land of the Premier League.

Leon Britton hit the nail on the head recently when he talked about what is really needed to bounce back. Talk of short-term fixes, moving away from our initial philosophy and how relegation to the Championship gives us an opportunity to rebuild.

“I think we can bounce back but the important thing is we have a clear idea of how we are going to move forward as a football club,”

“The last three years we have been fighting relegation and we have gone away from where we were before in terms of the football because to stay in the league you do anything you can.

“Before we got into the Premier League, and the first few years in the league, we had a way of playing, in recent years it has gone.

“But if we go down to the Championship it will give us the opportunity to rebuild and try have a clear idea of what we want to do.

“Hopefully we can do it in a season, but if it is two, three or four years down the line that has to be in place.

“I would rather not come back next year and be in the same situation. I would rather it take longer to have something built to be sustained over a longer period in the Premier League.

“But we need a long-term vision going forward. It can be difficult in the Premier League but in the Championship if we have that idea in place it gives us an opportunity.

“It has worked for us over a number of years, everyone would like to see that because it was clear for everyone involved inside and outside the club. There was a clear philosophy.

“We have slowly gone away from it. It took time to build up, it did not happen overnight, and it has not gone overnight through an appointment of one manager. It has happened over time. We need to get back to it.

Like I said, Leon Britton has absolutely nailed it here, identifying the need to rebuild back to what we once had, something sustainable that will last rather than looking to do whatever’s necessary just to get back to the Premier League. It’s a view shared by Alan Curtis, who also identified the vital need to get back to our old ways.

Huw Jenkins has had too much control over the footballing side of the club for far too long, acting as a Director of Football and the results speak volumes for how incompetent he’s proved to be in that unofficial role.

The American owners have kept chairman Huw Jenkins at the club to – in their words – help them guide the club forward and to learn from his experience and knowledge, but so far it’s been an absolute mess. Even before the Americans took ownership things were going wrong and surely it’s time that the Americans looked elsewhere for advice on how to rebuild for the future.

Alan Curtis has also told BBC Sport this week about our philosophy and the need to get a manager and players in place to “implement that”.

In a video interview with the BBC after the Southampton game, when relegation was all but confirmed, Curtis identified some of the reasons behind our decline, citing poor player recruitment and having to appoint managers just to “firefight”, without fitting in with our philosophy.

Imagine if Alan Curtis was chairman of Swansea City Football Club. What a world to live in…

Calls for Alan Curtis to be chairman are very far-fetched and unrealistic I’ll admit, but at the very least the board need to take on the advice and experience of the likes of Curtis and Britton.

“I think we’d all agree that Roberto probably started the process but, if you remember, he started it in League One and the process actually took a couple of years,”

“You can make mistakes in League One and you wouldn’t get punished. As we became better and more refined, people took it on a little bit further each time.

“To actually get that sort of philosophy back again, you obviously need to have the players for it.

“More importantly, you need to have the coach or manager in place who wants to implement that – but that’s going to be difficult.”

In the video interview, he also talked about how the likes of Stoke and Southampton will have a “review” at the end of the season and how the Swans need to “look back at the mistakes we have made” and “hopefully remedy them”.

An end of season review is an absolute must, it’s a no-brainer. I’d have thought that an end of season review would happen anyway – at all clubs – but ours needs to be more in-depth and thorough than ever before. Not only that but surely it has to involve the likes of Alan Curtis and Leon Britton for advice and guidance at the very least.

What we used to get so right, we’re now getting so wrong. We’ve been treading water now for 3 years at least, our constant failings finally caught up with us and relegation was the inevitable outcome. Huw Jenkins has had too much control over the footballing side of the club for far too long, acting as a Director of Football and the results speak volumes for how incompetent he’s proved to be in that unofficial role.

If he doesn’t leave this Summer, then at the very least he needs to relinquish control. The player recruitment, something that Alan Curtis was quick to point out as one of the key reasons for our recent failures, needs a complete overhaul with absolutely no involvement from our chairman. Such control needs to be passed over to our new manager along with a re-structured scouting system that can help to build a competitive squad again, replacing departing players with those that are better suited to restoring our old philosophy.

The American owners may demand a quick return to the Premier League, but such ideas would be unrealistic and naive. We’ve heard Jenkins in the past about the need for “lessons to be learnt”, but that was years ago, and we’ve just got worse and worse.

Will the Swans finally learn their lessons and take on board what the likes of Alan Curtis and Leon Britton have said over the last week or two? What are your thoughts on the club and where we’re heading? Let us know in the comments below or join in the debate on the forum