TAWE Blog #14 – An Absolute Disaster On Transfer Deadline Day – Where Do You Even Start? 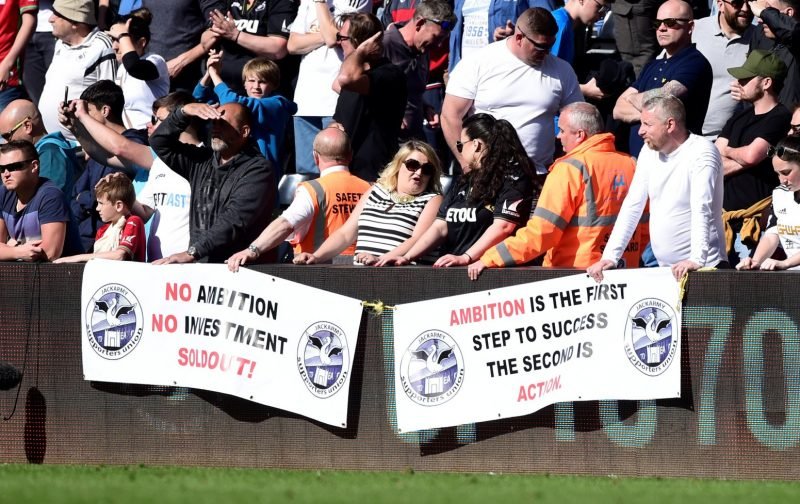 I was in two minds about writing a TAWE blog this week, mainly because I don’t even know where to start in terms of what happened on transfer deadline day and putting it all into some perspective.

Firstly, it was expected all Summer that we would lose players and we’d see more than £40m come in for our players – I mentioned it a few times during the Summer. I never expected much of that to be re-invested back into the squad, but I did think we might have spent around £10m in replacements.

On Thursday’s deadline day, we allowed the following sales:

The Jordan Ayew loan move was a frustrating one to begin in, as we were hoping to bring in some decent money for him – he was our top scorer last season after all with 11 goals. We’d rejected an earlier £8m bid from Fulham and we didn’t really hear about any other follow-up bids after that. Crystal Palace wanted him but that fell through because a swap deal couldn’t happen as the player coming to us turned down a move to a Championship club.

Federico Fernandez is the one that hurts the most. He was our skipper and performed so well last weekend in the win at Bramall Lane. His partnership with Mike van der Hoorn looked really solid and potential to be one of the best in the League, but Fernandez’s move to Newcastle was always expected – particularly after van der Hoorn and Fer were the new chosen captains.

We all were hoping that we wouldn’t have another Gylfi Sigurdsson saga but we did. 4 players sold on transfer deadline day – 2 central defenders – making that 4 defenders sold in total this Summer – and how many have we brought in? Zero.

Our strength in depth in our opening game was pretty weak, now it’s far, far worse. Yes, only 1 starter at Sheffield United has been sold, but we’ve got 1 senior defender – ONE. Joe Rodon and Cian Harries need to be called upon who both lack League experience – either that or you turn Kyle Naughton into a makeshift centre-back.

This could be his big chance now. Another Ben Davies moment perhaps? God I hope so. https://t.co/JJenwIJUq7

#WBA fans think they have it bad. Look at Swansea's situation. Not only have they offloaded large amounts of their team but they couldn't lad a key player they've been chasing for weeks.

Puts things into perspective. Feel sorry for swans fans their board is awful.

Midfield was also an area that needed to be strengthened – that was clearly evident last week when we lacked backup options on the bench. I suppose Matt Grimes can now offer his services as a backup midfielder rather than a left-back now that we’ve brought in Declan John – who could possibly fill in at centre-back also.

Following the Ryan Woods story for the last week or two now, it’s difficult to fully understand where and how this move fell through. There were mixed messages on deadline day – some saying he had his bags packed ready to travel for a medical, while others suggested that his club Brentford had increased the asking price at the last minute. Were we only £500,000 from agreeing a fee? I’m not so sure, because reputable journalist and Swansea fan Stuart James tweeted that we couldn’t even afford the loan option:

For those asking about possible Ryan Woods loan to Swansea with view to a permanent, it was a potential option. Sense was Brentford could be persuaded. Swansea, however, said they couldn’t even afford that… & that should manage your expectations when it comes to other loans

Some people may wonder what is the fascination with Ryan Woods? Well together with our need for some quality in his position, he’s also a highly regarded player that Brentford fans would be gutted to see go. Not only that, but there’s still the memories of losing out on Joe Allen all those years ago and you can’t underestimate what a quality holding midfielder can do when you’re trying to play a particular style of football that Graham Potter is looking to implement.

Alan Nixon has been a reliable source of transfer news throughout the Summer and he also revealed that Fernandez and Amat would be leaving before it was made official.

On the Woods story, he recently tweeted this:

So we was going 2 pay? #swans pic.twitter.com/AgIrlNBsVM

Again, with different things being reported, it’s difficult to know exactly what happened regarding the possible move.

There was a lot of discussion on Twitter earlier today about the amount of money that had been spent or wasted I should say on players in recent years. The likes of Andre Ayew, Borja Baston and Sam Clucas – big fees on players that we’ve ended up either loaning out or selling for a lot less.

See below the full season-by-season figures and you’ll see that despite wasting a lot of money, we’ve still made a healthy profit:

Of the £63m profit we have made in transfers since 2015, £40m of it has been made this Summer alone. #swans #swanseacity #twitterjacks https://t.co/DgNqRwioaZ

The club released a statement today and just like all of the other ones in the past, it totally lacks any substance, here’s a snippet:

"In terms of recruiting players, again we had to be disciplined as we could not and would not put the club in a position where,in our view,the fees and wages demanded were not in the best interests of Swansea City.All money received from player sales has gone back into the club."

The statement also goes on to say about ensuring the club’s long-term financial future and I’m all for that of course but there just doesn’t seem to be a plan in place. The Americans seem to be operating simply from a business perspective, making cut-backs and saving money to ensure future bills can be paid – e.g. wages. But then again, you can’t leave your new manager with one senior striker (Oli McBurnie) and one senior defender (Mike van der Hoorn). And I’m not suggesting that we should spend big money on replacements either. So far we’ve spent wisely on attacking players and I was hoping the same would happen for defensive players too.

Fans can tweet #jenkinsout all they want, but even if he went tomorrow nothing would change. The useless Americans are making the calls and deciding not to bother signing the likes of Woods.

Trying to think of the bigger picture here, we need to be thinking longer-term. The wage bill is coming down from the £99m figure it was during 2016-17 and our parachute payment this year of around £50m will be less in the following two years.

Any business owners worth their salt in the football game will be planning financially for the next few years as well, not just now.

But I’ll repeat again, you still need to replace players and it can be done on a budget, we proved that years ago and McKay coming in for £500,000 this Summer is an example of it. We’ve still got until the end of August for loans and loan-to-buy deals, but you can’t blame us for not feeling overly confident that we’ll do some decent business within the next three weeks. Not only that, but we’re playing games during that time, and we needed players in this week.

Ok, enough of that. Let’s move on. We did actually play a game last week and we got off to a winning start away at Sheffield United.

Here’s our Passing Network Map of the first 63 minutes at Brammal Lane, which shows the 3 most common passes for each player, the total number of passes (circle size) and the passing accuracy (circle and line colour).

Passes were generally shorter and more accurate as you’d expect and we also saw more forward passes throughout the team. 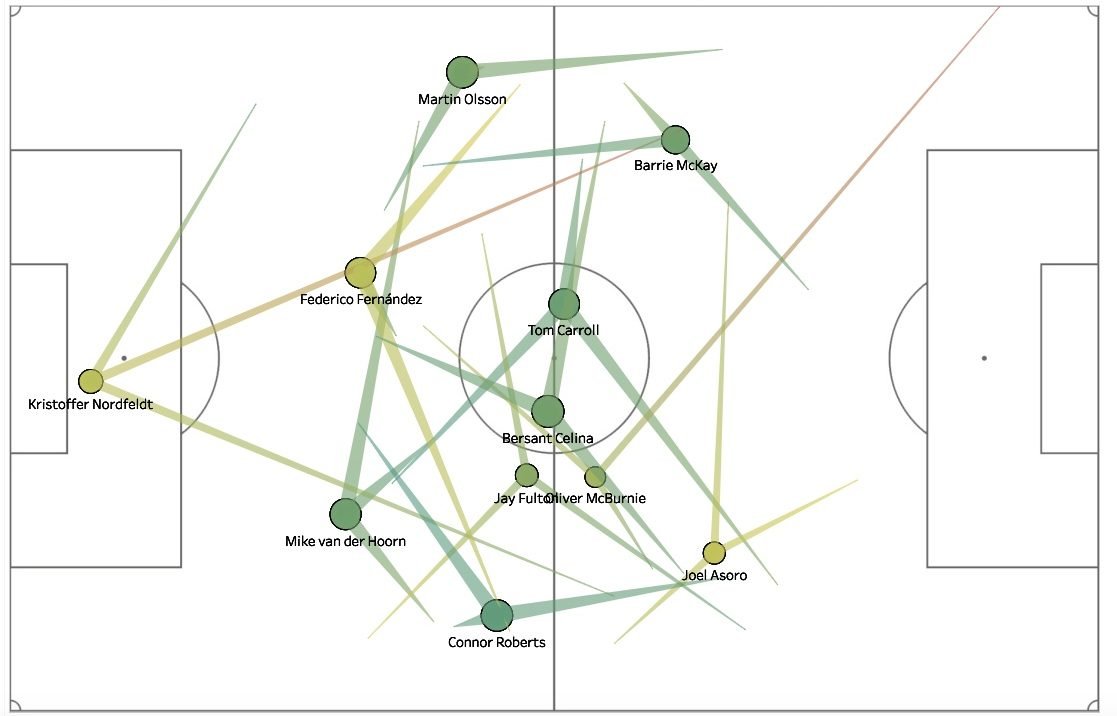 Below is the Chances map showing the quality of the chance (colour) and the expected conversion rate (size of circle) – courtesy of data from StrataBet. 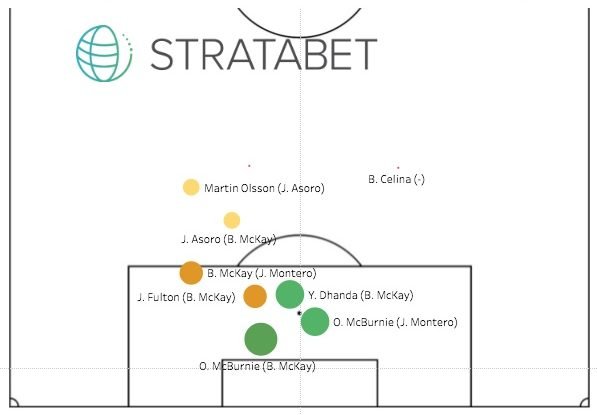 The map above shows how influential Barrie McKay was in the game, contributing to 5 of our 9 chances – 4 shot assists and a shot that hit the crossbar.

This article was written with the aid of StrataData, which is property of Stratagem Technologies. StrataData powers the StrataBet Sports Trading Platform.

2 Replies to “TAWE Blog #14 – An Absolute Disaster On Transfer Deadline Day – Where Do You Even Start?”