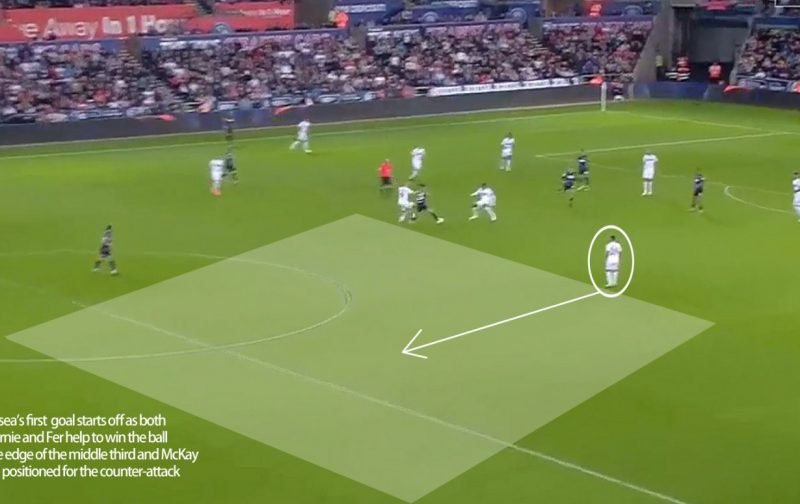 Swansea City manager Graham Potter executed an excellent game plan that effectively nullified Leeds United’s threat for long periods on Tuesday night as they halted their 100% winning start to the season with a very credible 2-2 draw.

It was a thrilling game at the Liberty Stadium that saw four excellent goals and superb attacking football from both sides who, on the night, looked capable of competing right at the top of the table. It was a great advert for the EFL Championship with both sides looking to play neat, attacking passing football but in slightly different ways.

As we expected, Leeds’ approach was more intense – particularly in terms of pressing high up the pitch while Swansea’s plan was more balanced and most importantly more effective.

Potter’s tactical plan wasn’t very different to those that he’s adopted in previous games already this season – particularly in how they approached the pressing. Like at Sheffield United, the pressing was balanced but mostly about good positioning rather than pushing high up and in the faces of Leeds’ defenders. 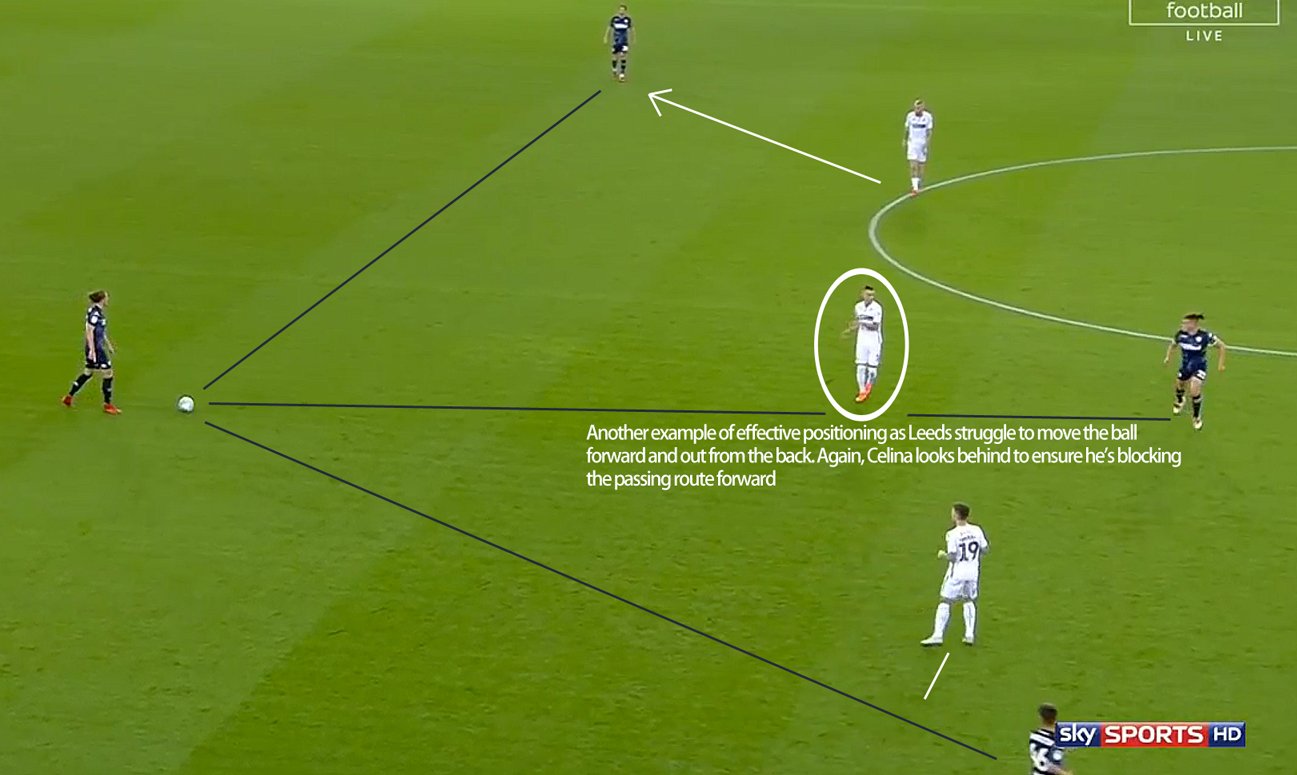 The screenshot above shows a very common situation during the first half where a Leeds defender is in possession and has a lack of obvious passing options in front of him. McBurnie had a key blocking role at Sheffield United – ensuring he always blocked a pass into the holding midfielder, and against Leeds it was often Celina who had this job.

We can see Celina above (circled) looked behind him to ensure where his marker was and to ensure that he was well positioned to block the pass to him. The two players either side of him – McBurnie and McKay are simply well positioned ready to press if and when they need to.

The below example is slightly different to the first with Leeds in a deeper position and nearer their left side. Connor Roberts, who was moved to a right-wing role also pushes up to assist the now four-man press – if you could strictly call it that at this stage. 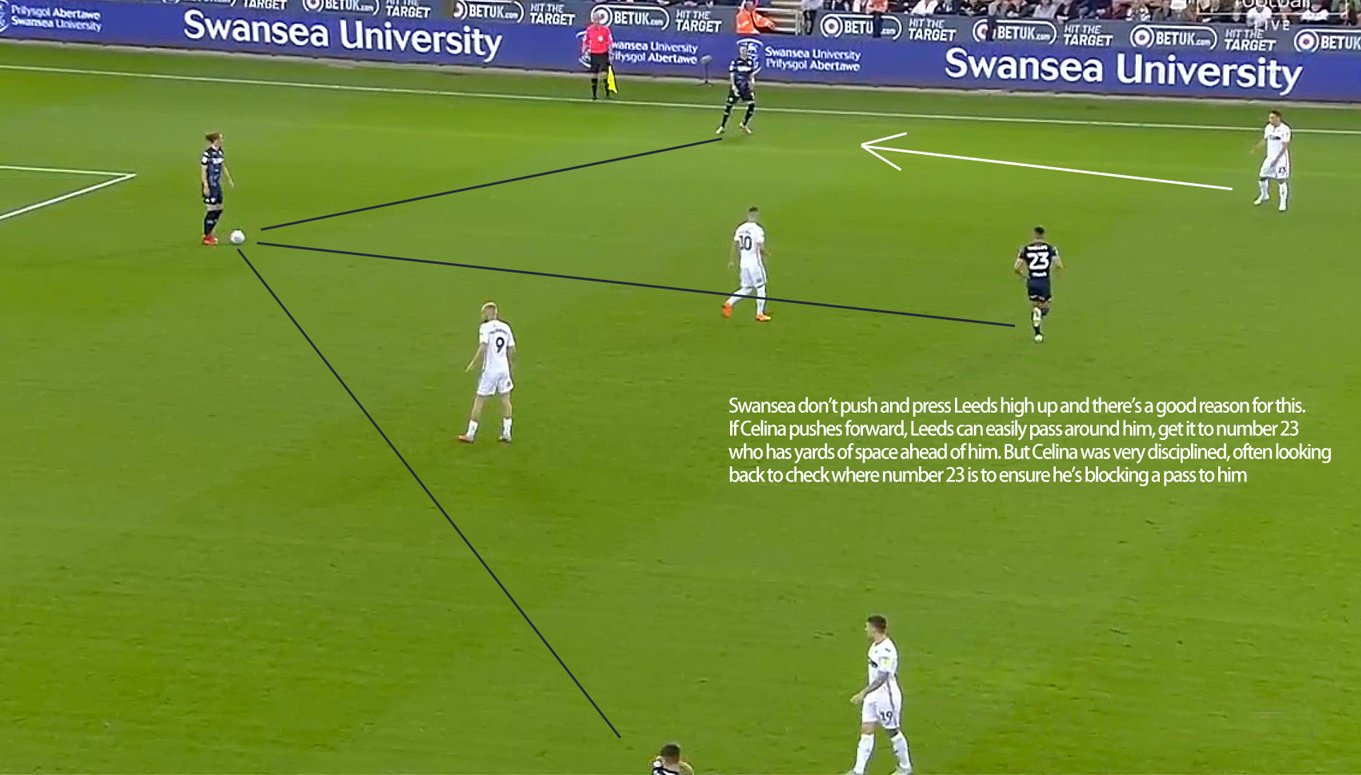 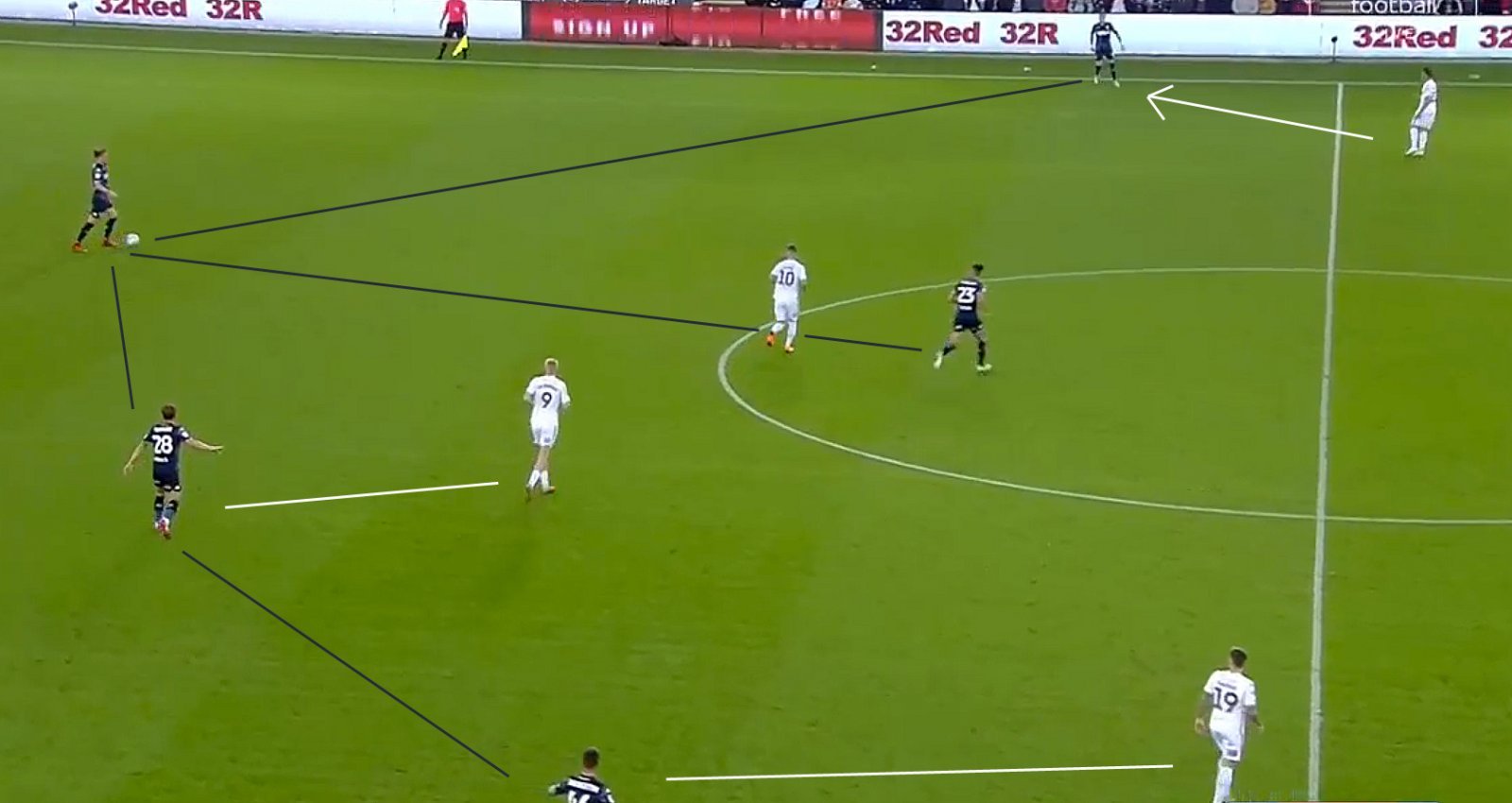 It wasn’t just Celina either who was looking back and checking for his marker. McKay too was also disciplined on the left side. In the example below, we can see him looking back to ensure he’s blocking a passing route out wide. 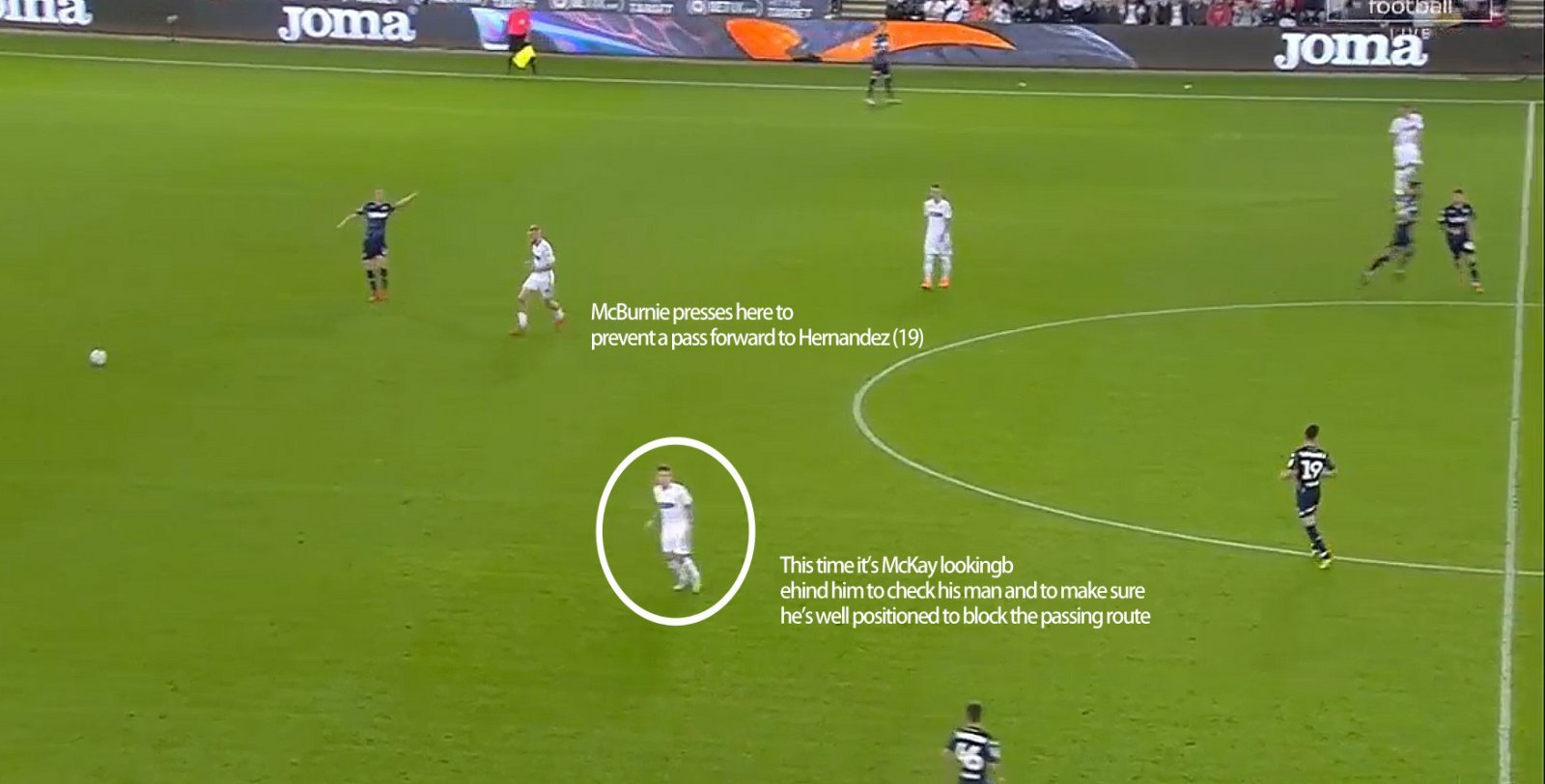 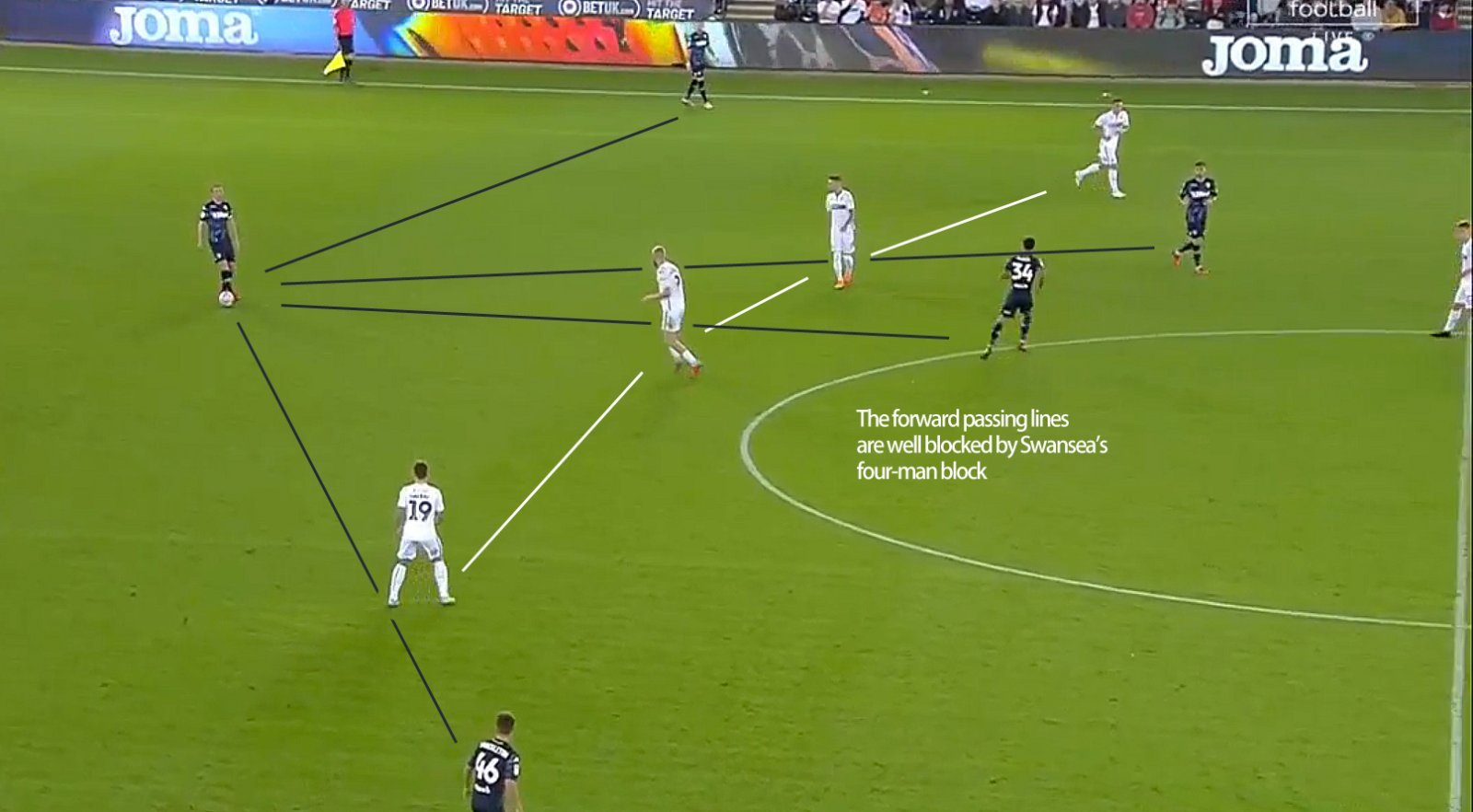 Why Leeds’ press wasn’t as effective

Leeds’ high press was nowhere near as effective as Swansea’s as the home side were comfortable in possession in deep positions and they were also able to enjoy the space that Leeds’ press left behind them in the middle third of the pitch.

Below shows Leeds pressing high early on in the first half with five players either inside or near their final third of the pitch.

Above, Fulton quickly passes out wide to right-back Kyle Naughton who then has plenty of space to run into ahead of him – below.

This space in the middle third was a big problem for Leeds in the early exchanges but it wasn’t just when we avoided their high press that it became available, the Swans also looked to congest the middle third, rob possession here and quickly move the ball forward into this space. 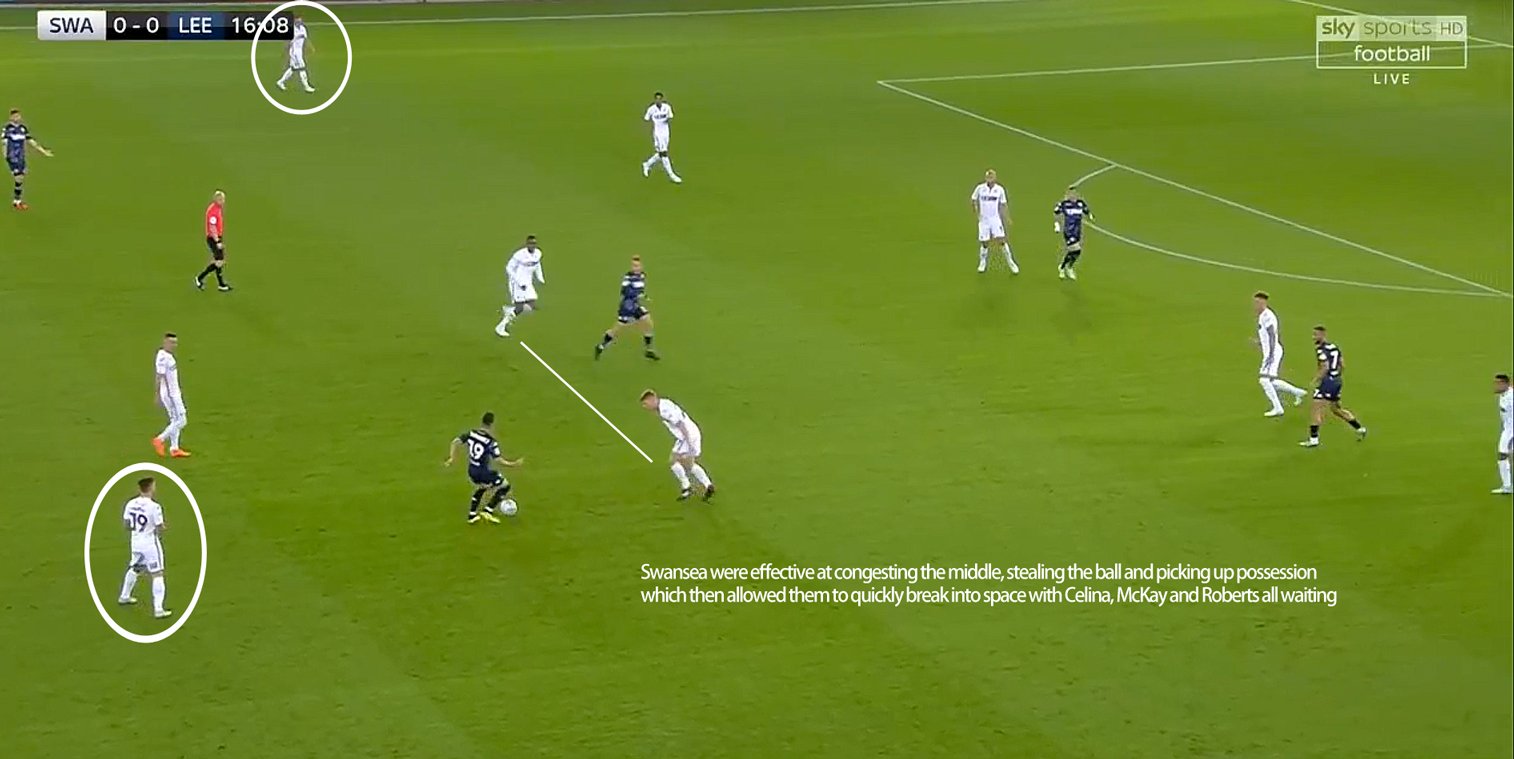 Both Leroy Fer and Jay Fulton played a key role in Swansea’s plan to create attacking opportunities. Other than escaping Leeds’ high press, it was often about stealing possession in these areas and quickly getting runners off in the large areas of space that Leeds left behind. 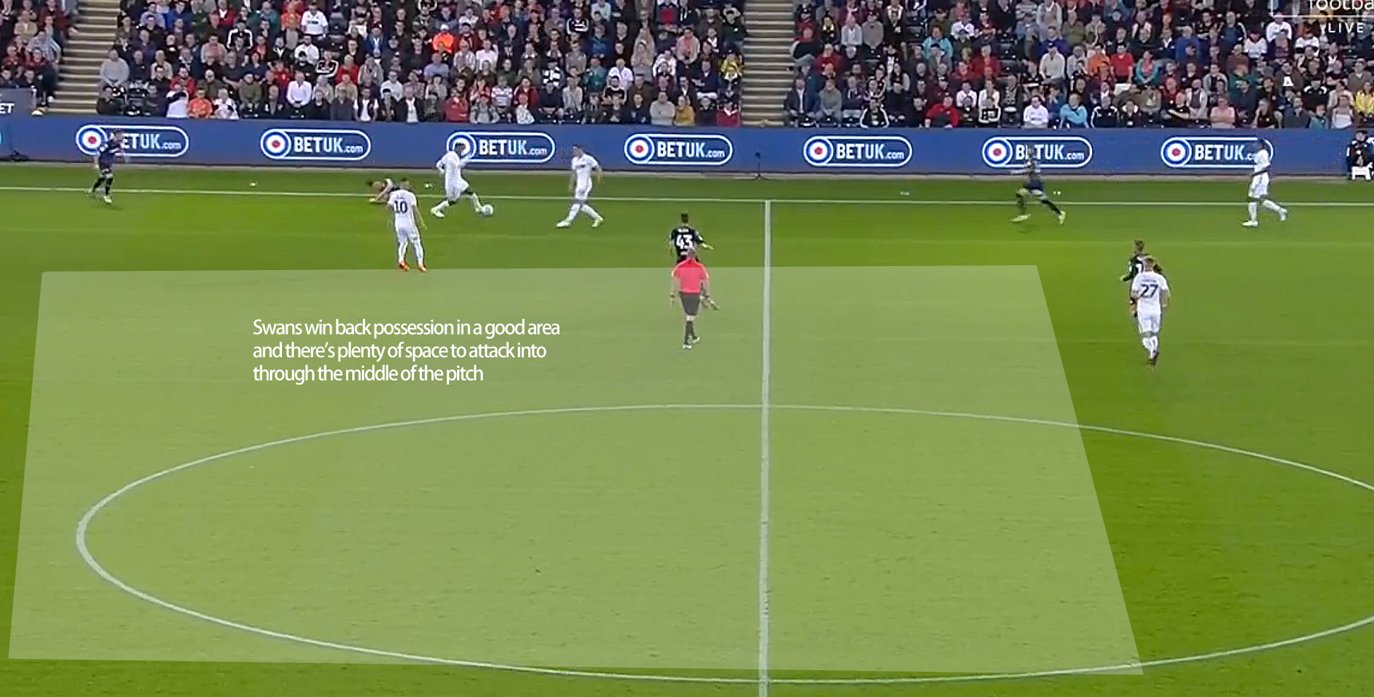 Above, Leroy Fer has won the ball back in a good position, just inside Leeds’ half and you can see the huge area of space that they can attack into.

Celina, in particular, was excellent at doing this, picking up the ball and running into this space and Leeds just couldn’t cope with him in the first half – so much so that Bielsa was forced into a tactical sub before the half-hour mark.

As a result of Swansea’s tactics to win possession in the middle of the pitch and quickly play into space, they were happy enough to retreat and sit deeper when Leeds moved into the opposition’s half.

As Leeds move forward into Swansea’s half below, they’re happy enough to back off and ensure they have them covered man vs man. The main passing routes are covered off well and yet again it’s Leeds’ number 2 who’s trying to decide where to make a pass. 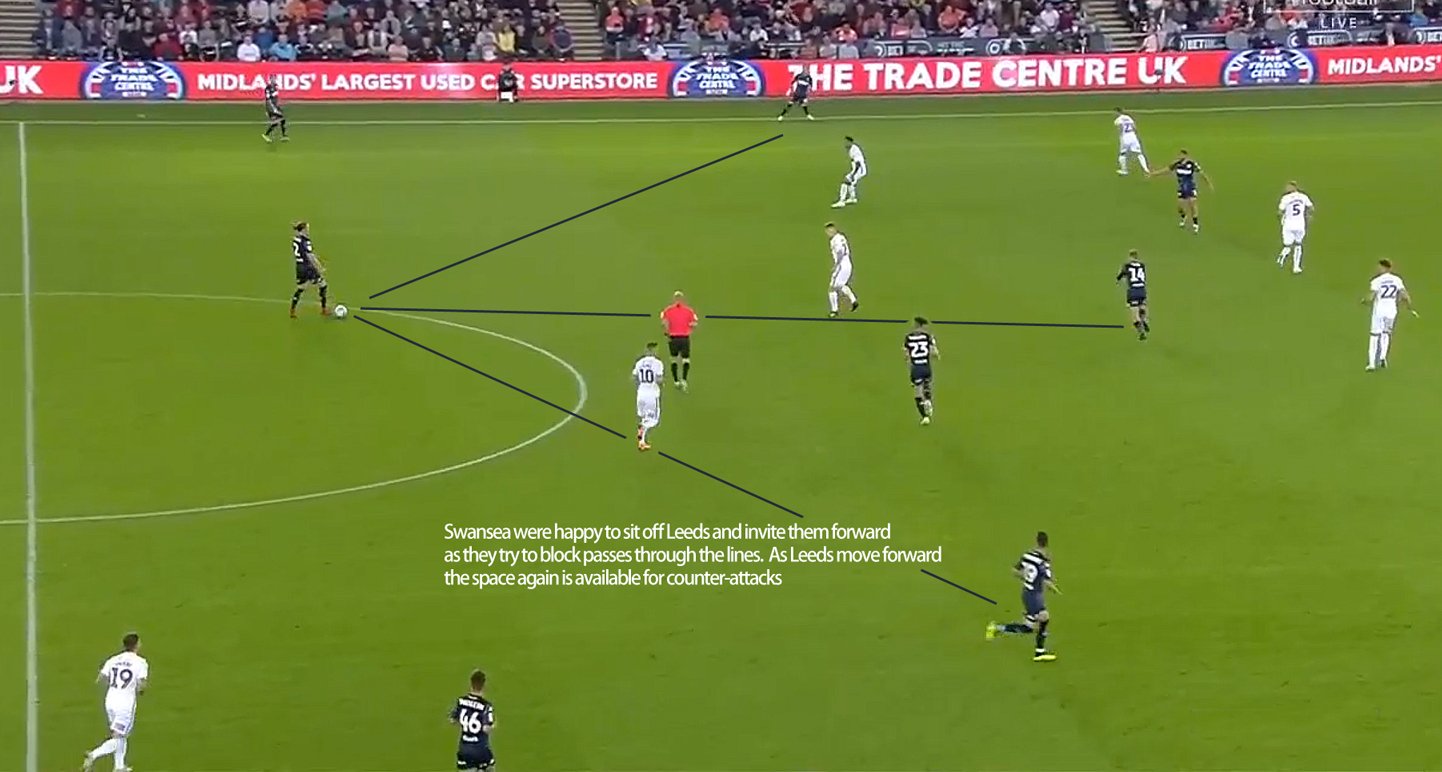 Below is a better example of how Swansea start to get tighter on Leeds – pressing in their own half before attempting to win the ball now in this transition before looking to the likes of Celina (10) and McKay (19) who can make full use of the space they find themselves currently in. 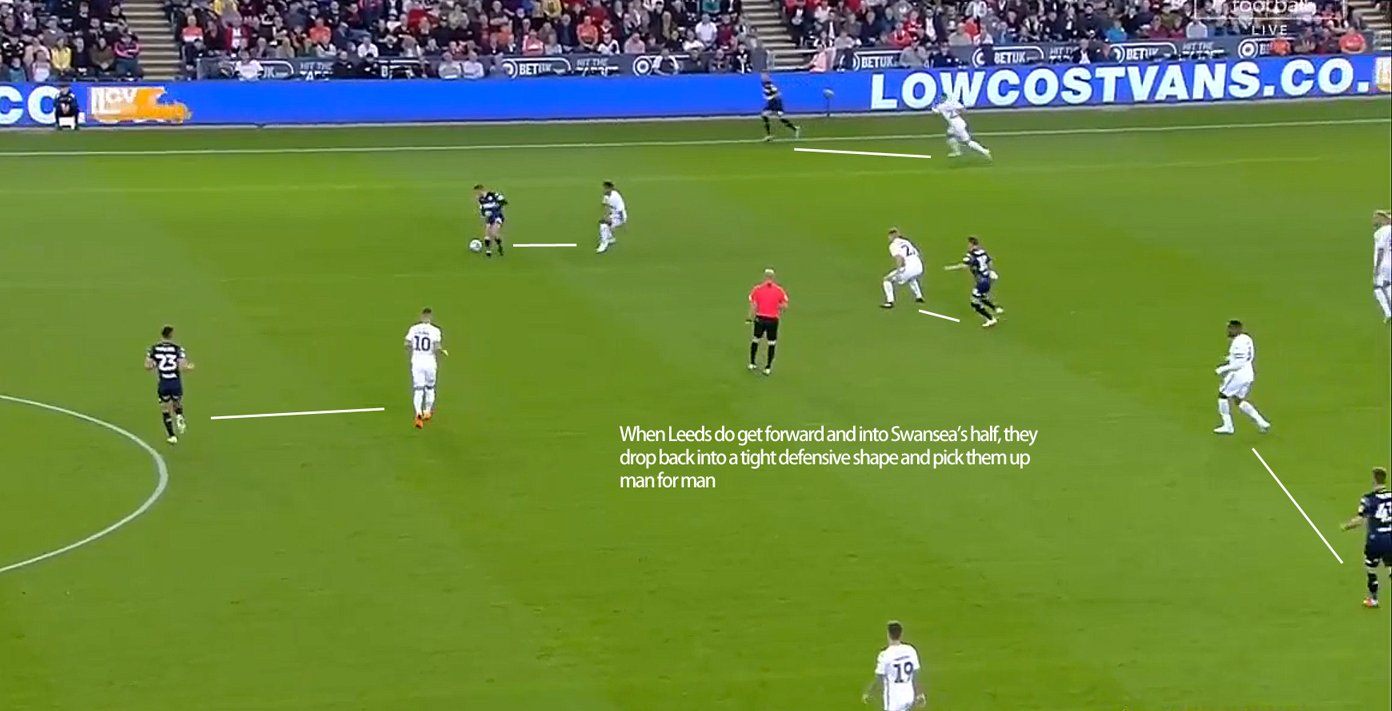 And this is exactly how we created and scored our opening goal about mid-way during the first half. Oli McBurnie deserves the credit for helping to start and finish off the move by dropping deep and joining Leroy Fer in winning possession in these positions in the middle third (below).

Above – again you can see the large area of space that is available if you can win possession in these areas. McKay is quickly fed and he races into space, Celina and McBurnie are quick to support the attack through the middle (below). 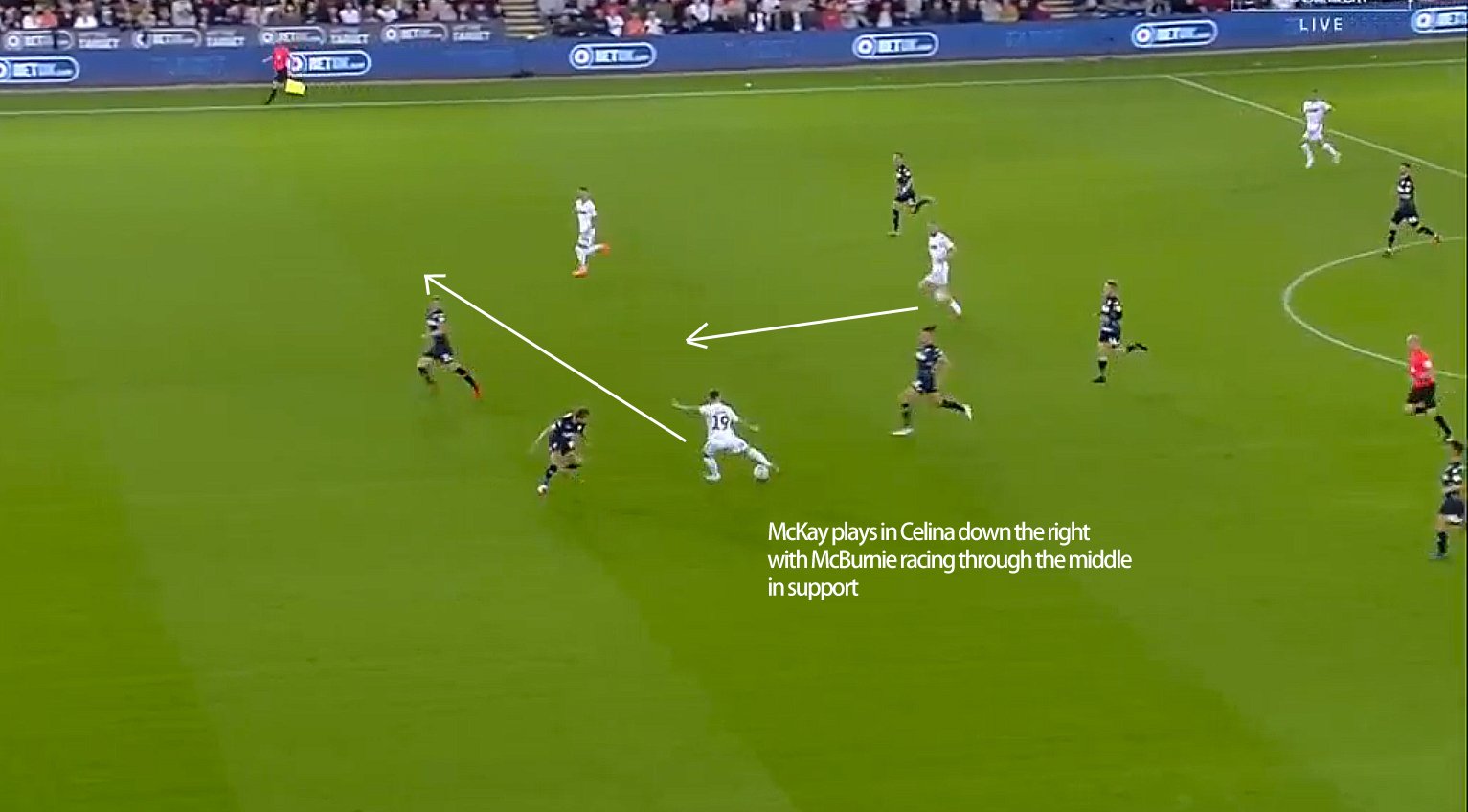 Celina slips the ball back inside to McBurnie whose first touch takes it beyond a defender and he toe-pokes the ball past the goalkeeper and into the net. It was quick, decisive and direct counter-attacking football – something we’ve not seen from a Swansea City team in some time! 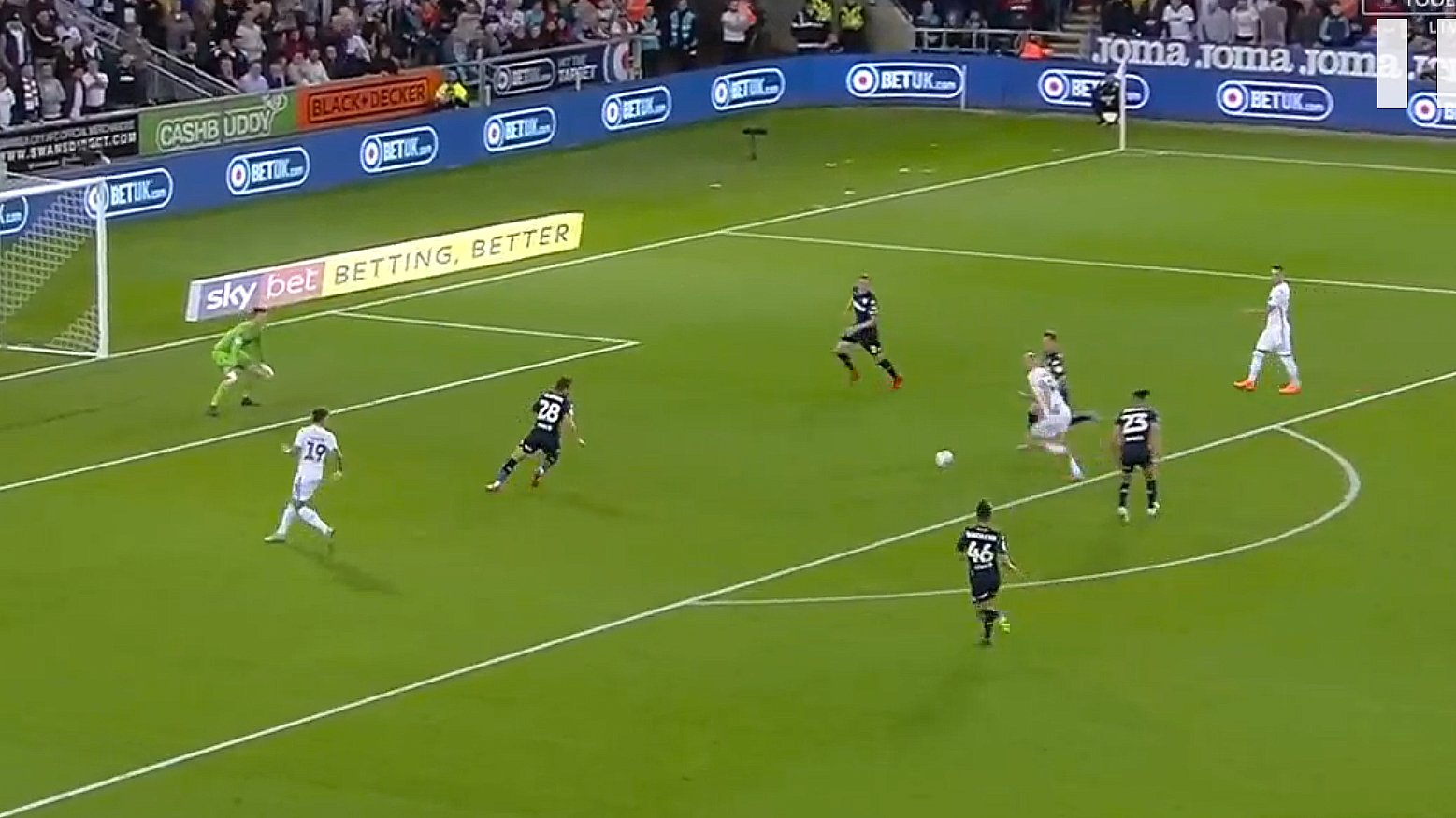 Another method for the Swans to get forward was utilising their two centre-backs. Joe Rodon made two or three excellent runs into Leeds’ half – effectively adding another midfielder into the mix. Leeds were unable to make successful tackles on either Rodon and van der Hoorn as they made strides forward. 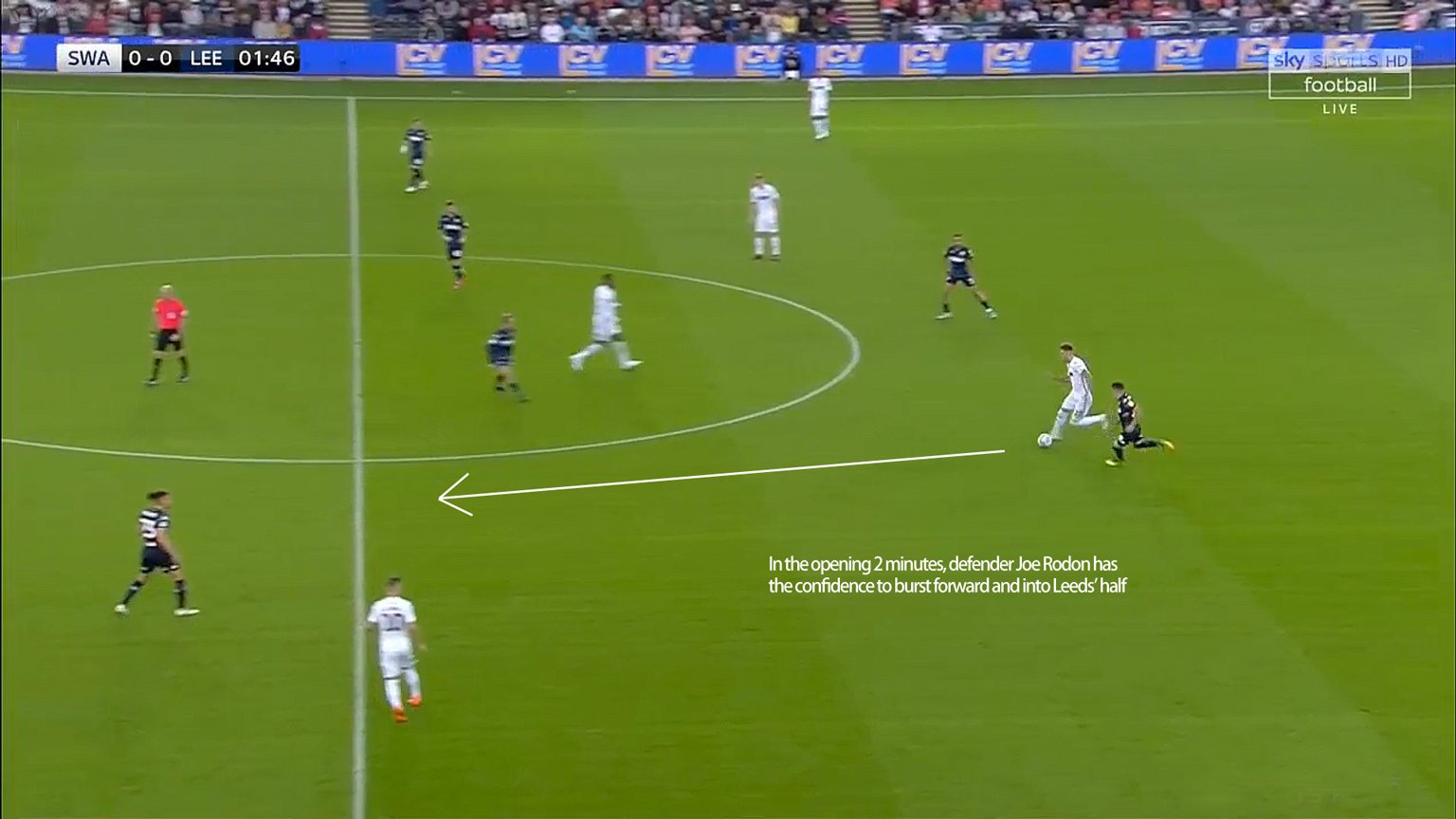 Only two seconds between the screenshot above and below as Rodon has made up 30 or 40 yards. 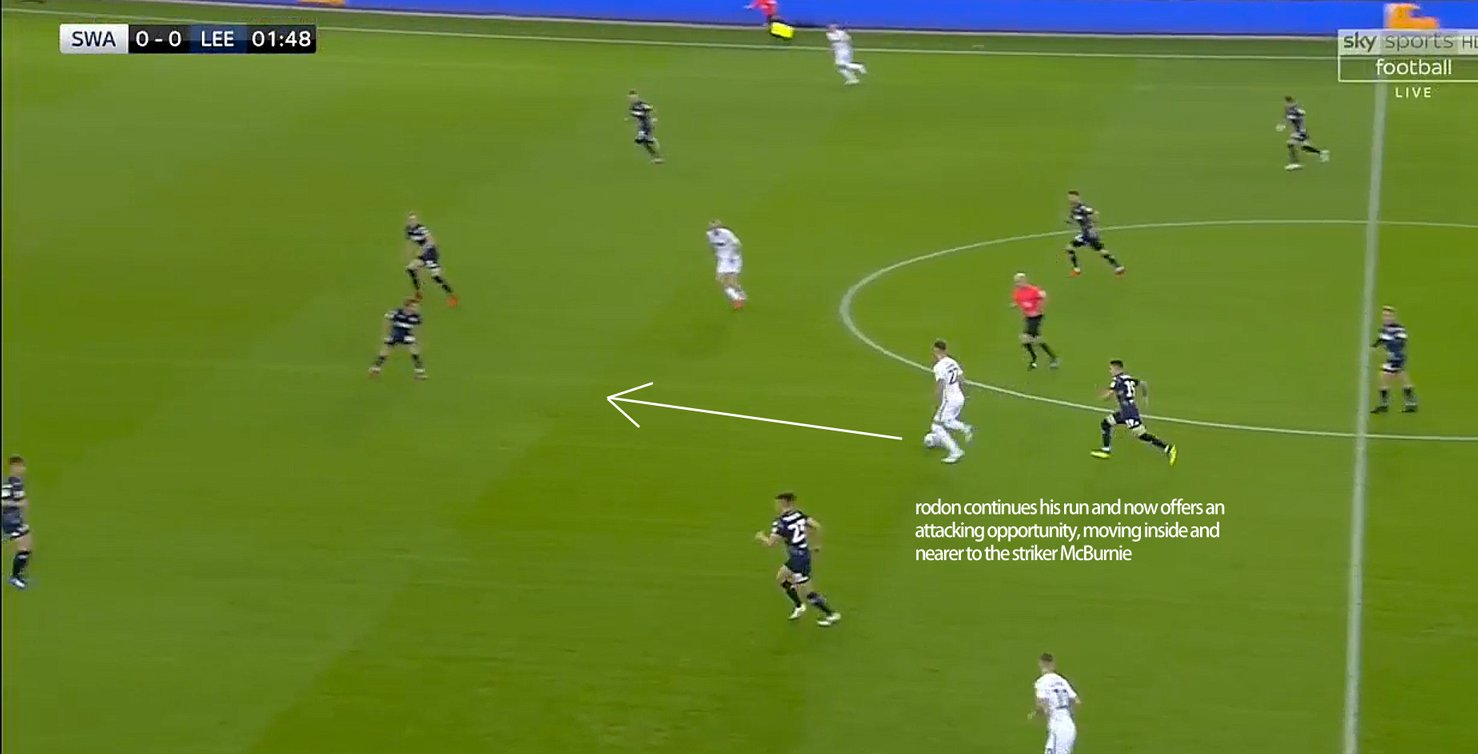 What was also refreshing to see was the freedom that both defenders had to move forward and stay there after making a pass. Below, Rodon passes to Celina, he continues his run down the left but there’s just too much pace on Celina’s return pass and the ball goes into touch. 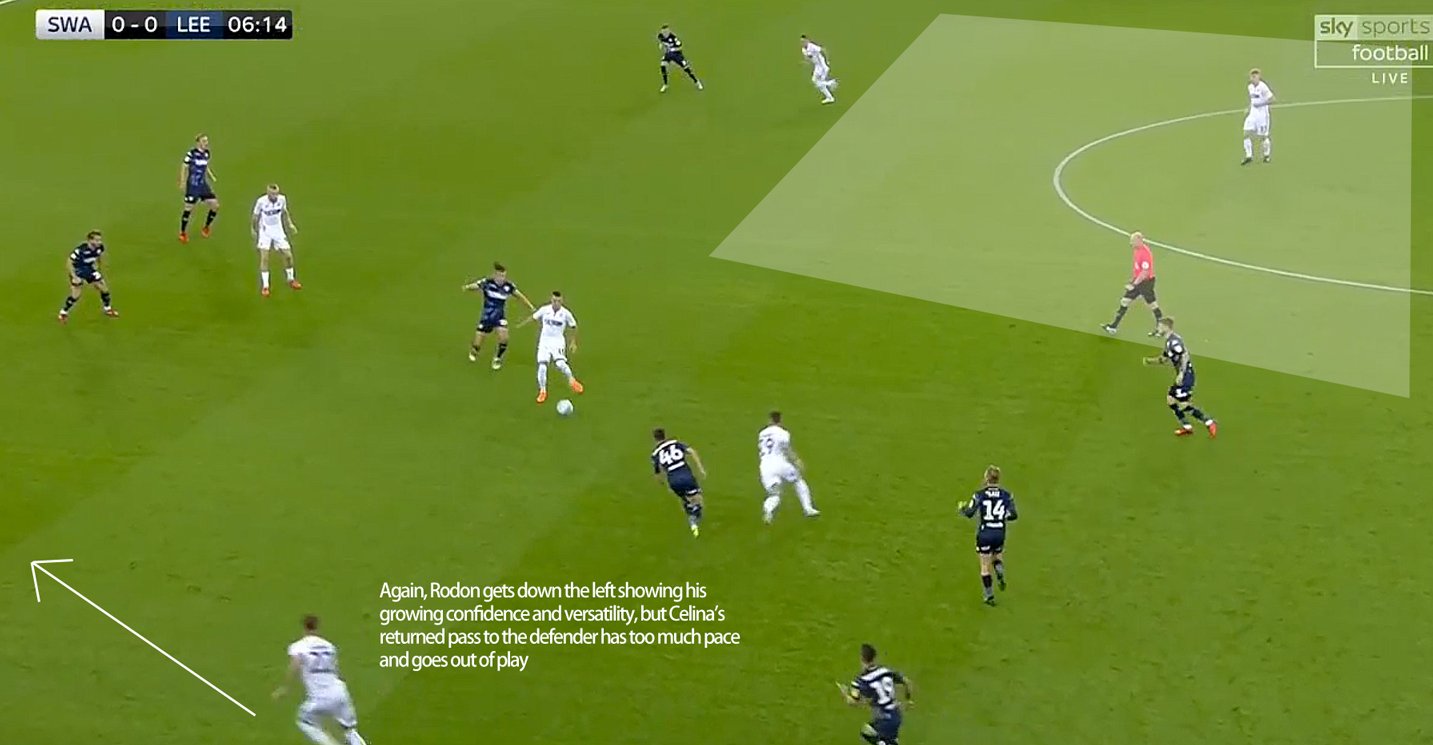 With Joe Rodon successful in his forward runs, it was Mike van der Hoorn’s turn early in the second half and it was his early run into Leeds’ half that contributed to our second goal. 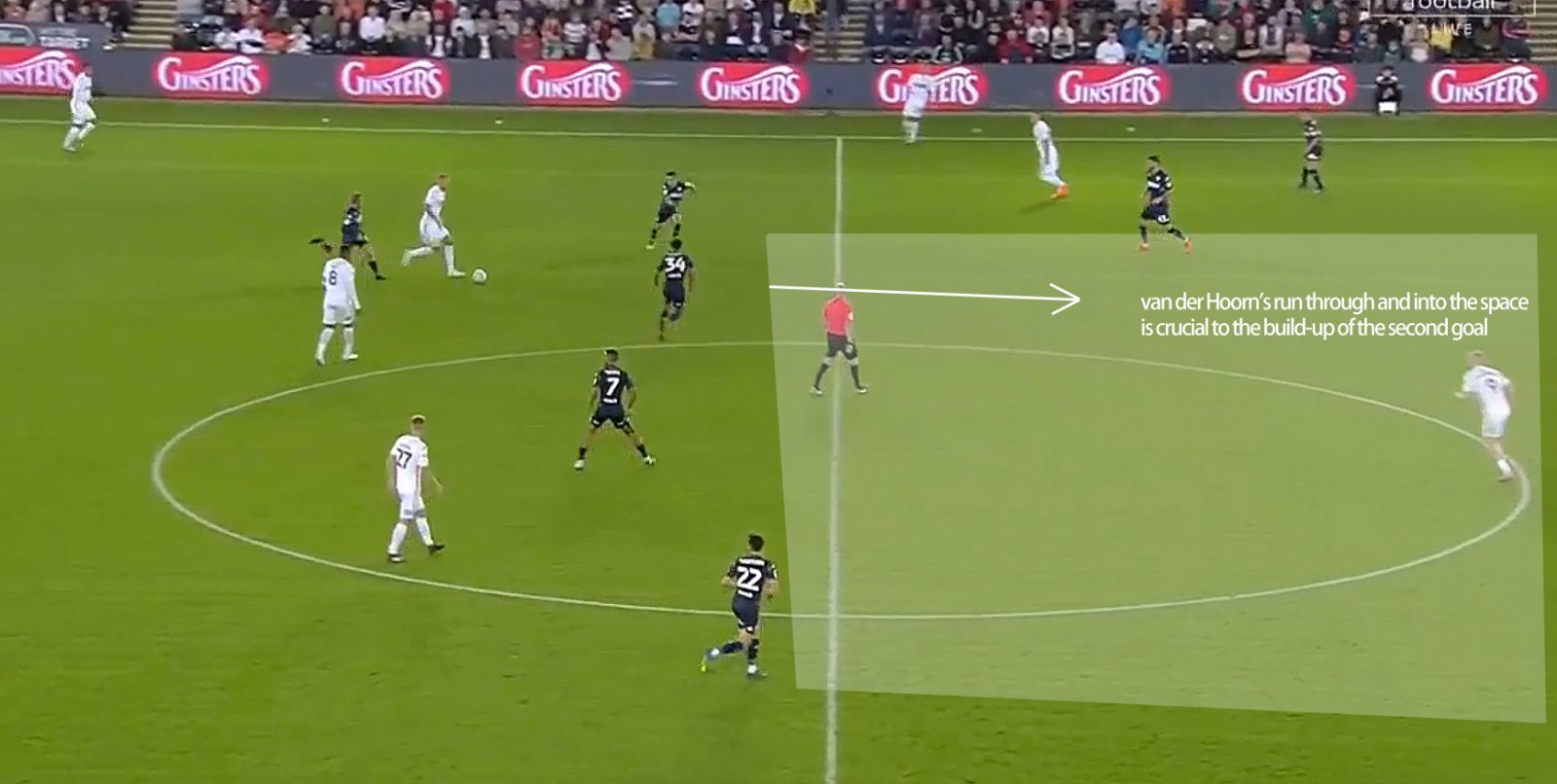 After making his way into Leeds’ half and making a decent pass to help keep the attack alive, like Rodon – he stayed forward and both Fer and Roberts stayed further back as defensive cover in his place.

Below, it looks like Olsson was going to cross from a deep position. He probably would have under a manager like Paul Clement, but he was confident enough to make a run down the left and send in an inviting cross from the by-line. 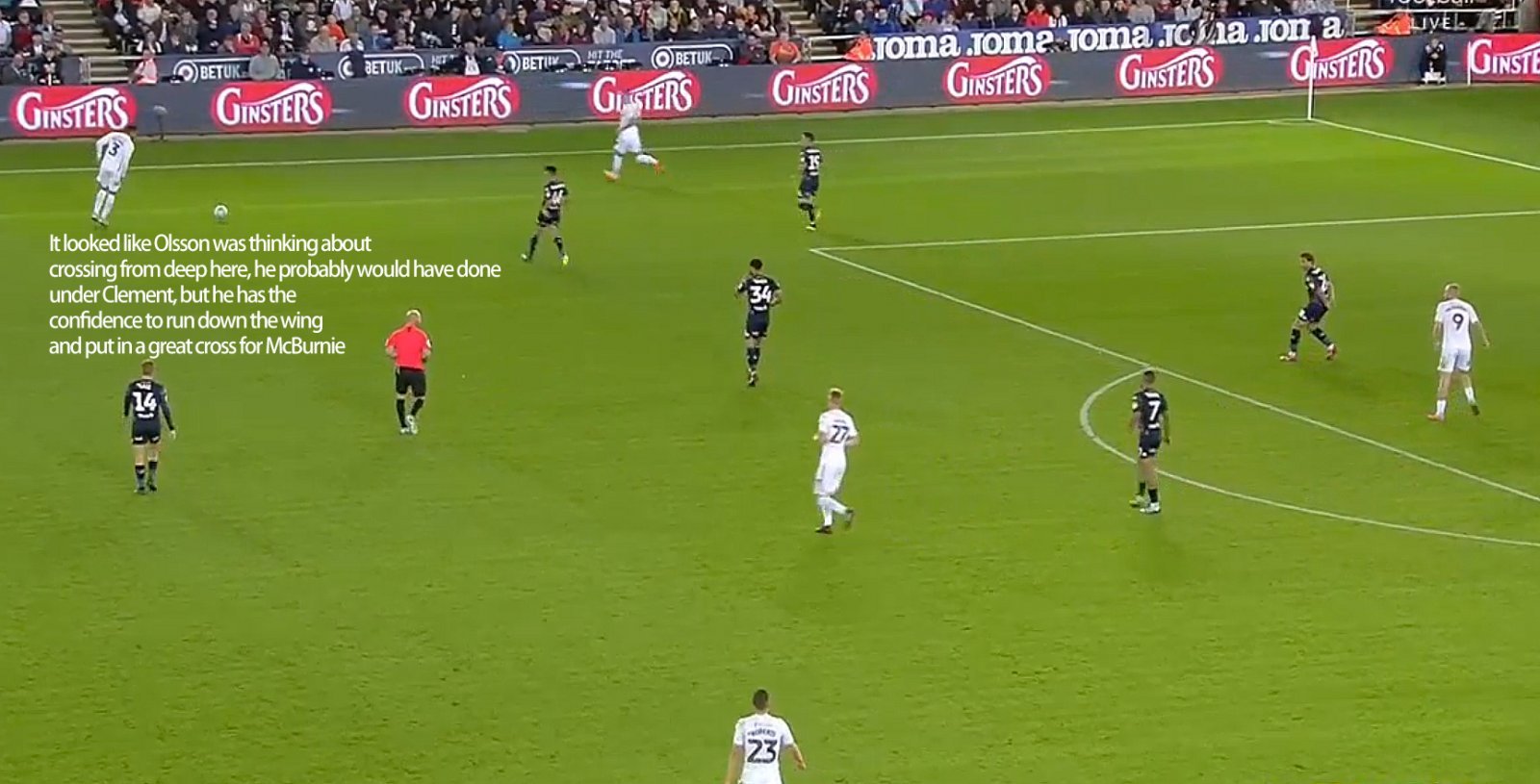 Below you can see how van der Hoorn helped inside the box. The defender is keeping their number 2 busy while McBurnie takes a step back – away from his marker – giving himself a few yards of space to power a header into the opposite corner of the net. 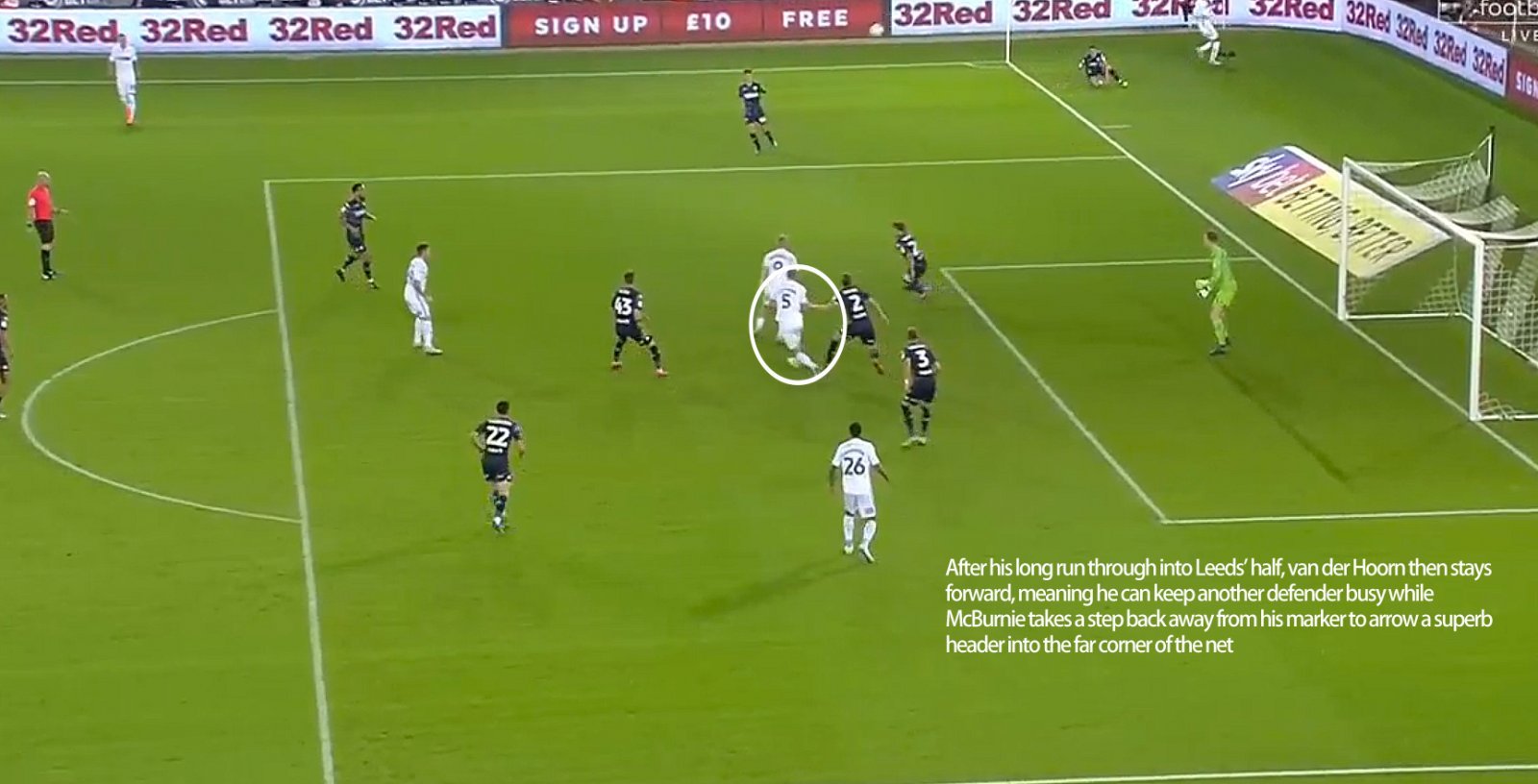 Check out part 2 of our Match Analysis on Friday when we look more into how Leeds got back into the game in the second half, how we struggled and later recovered defensively down our left side, how Swansea rotated positions when needed and Connor Roberts’ new box-to-box role as a right winger.