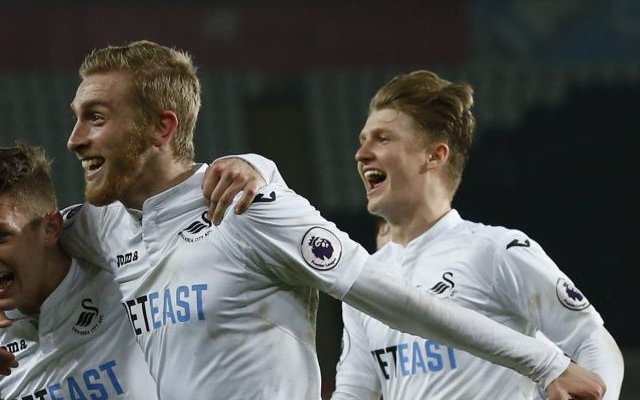 Swansea City are amongst the top three teams in the English Football League for giving young players a chance in the League based on minutes played this season by players aged 23 and below.

According to @prospectwatch1 on Twitter, Swansea City have given 18,042 minutes of game time to players aged 23 and under. To put those numbers into some perspective, that’s the equivalent of 11 players playing 49 minutes each in all of the 33 League games played so far this season.

Norwich City, sitting at the top of the Championship, have given young players 10,251 minutes of game time, 3rd placed Leeds 8,756 and 2nd placed Sheffield United – 3,675.

Out of the 92 clubs in the Premier League, Championship, League One and Two, only League 2 sides Yeovil Town (21,118) and Swindon Town (18,625) have given more game time to young players this season.

I think it goes to show what’s happened at Swansea City and their now lack of experience following the mass player sales since our relegation from the Premier League.

It was to be expected though. Manager Graham Potter was brought in to work with the younger players and to develop them into senior pros.

I think it’s fair to say that so far, he’s done in pretty good job in that respect. The likes of Connor Roberts, Joe Rodon, George Byers, Dan James and Oli McBurnie have all been promoted from the under-23s setup and all of them have stepped up. Summer signing, Bersant Celina, 22, has also been ever-present this season following his £3m move from Manchester City.

It goes to show the work that has been done in recent years within the under-23s setup – managed by Gary Richards and Cameron Toshack. It’s been tougher for them season following the promotions of Roberts, Rodon and co. but nevertheless, they deserve plenty of plaudits for developing these players.

It cannot be denied though that Potter’s squad is in need of some extra experience. I also think it’s fair to say that we’ve come short at times this season due to having a lack of experience in the squad, as well as the lack of depth.

But the younger players will only get better, improve and build up their experience. You’d like to think that the five players mentioned above are our future but the club’s owners have proven already that they have other ideas, going against their desire to use them by looking to sell Dan James in January.

Minutes given to players aged 23-years-old or younger in the Football League. pic.twitter.com/8M5Uy7mlDh