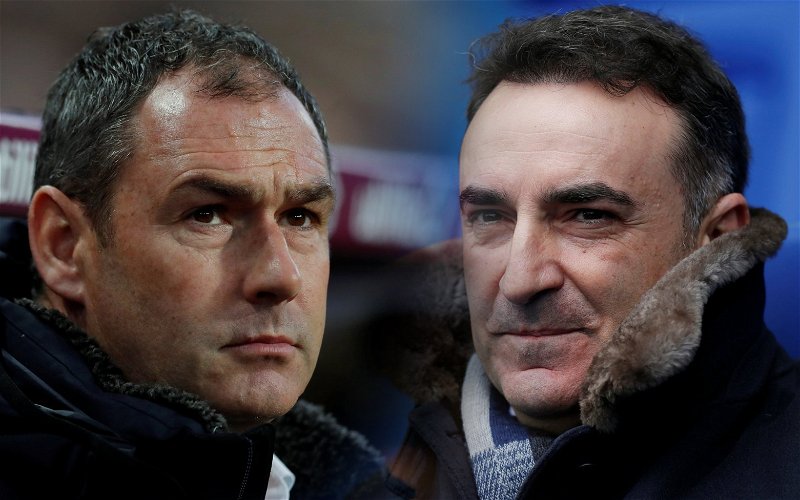 Following the site’s relaunch this month, we asked our Twitter followers what types of articles they wanted to see on Vital Swansea in the near future. The first request received was to look at a comparison between Paul Clement and Carlos Carvalhal. How much of a difference has Carvalhal really made since taking over from Clement at the end of 2017 and how does his start compare with that of Clement’s in 2016/17?

Firstly, let’s have a look at some of the key factors, and what Carvalhal has done to turn things around at the Liberty Stadium.

How Carvalhal Turned Things Around

The first few points here sort of merges into one really. I don’t know for definite, I can only go by what I’ve been told but the atmosphere and morale behind the scenes was very low. You could say that would be obvious and expected given our performances at the time and our rock-bottom position in the table, but there’s a bit more to it than that. By all accounts, Paul Clement was overly focused on making training about team shape and positional discipline, which doesn’t tend to go down very well with the players. It’s boring and monotonous.

Carlos Carvalhal came in and quickly changed all that. He’s a positive, happy and likeable person which is what the players needed. They needed lifting and it was obvious that Carlos went in there and encouraged a much more positive atmosphere, as well as positive football on the pitch. 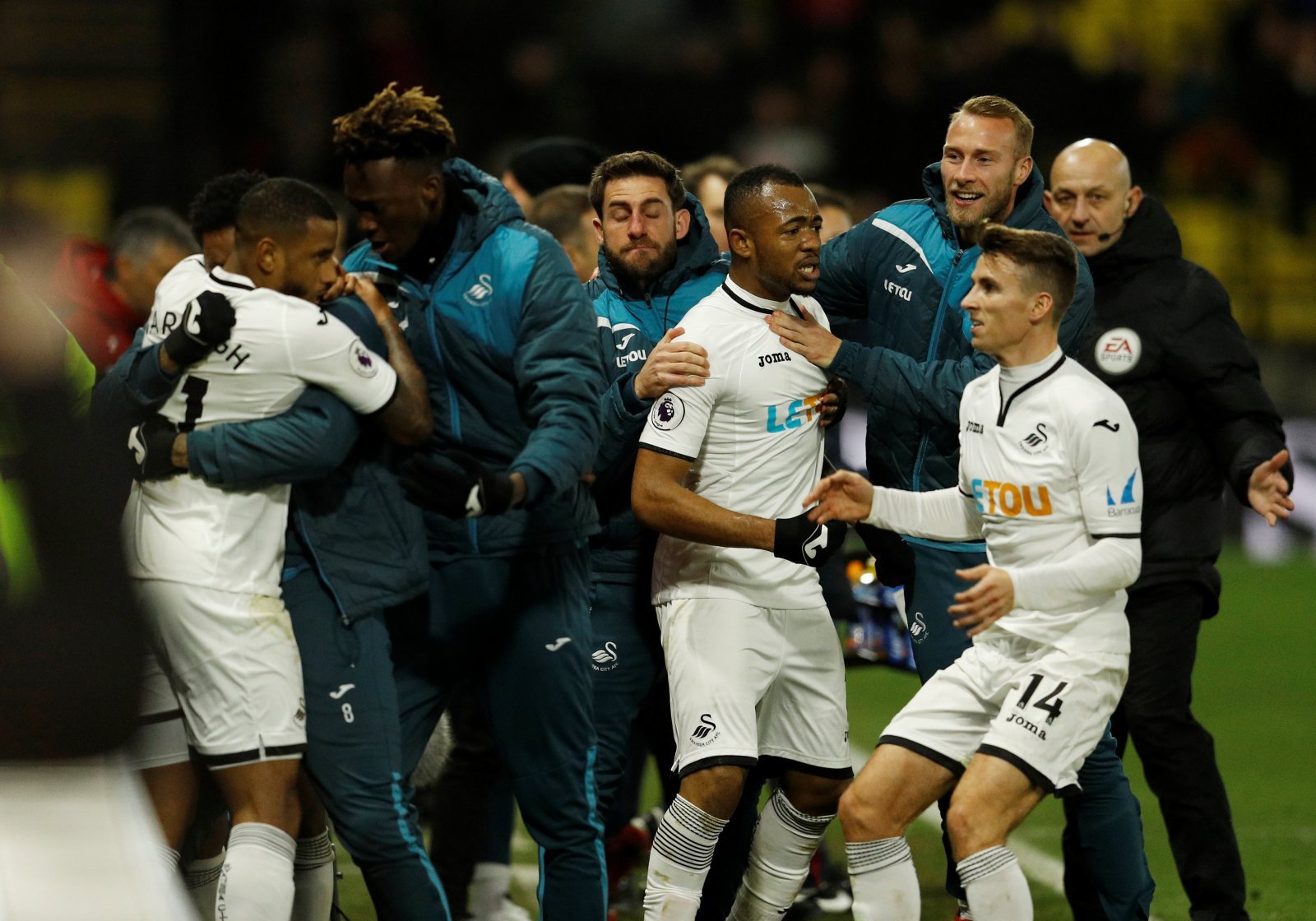 “It was so bad that during November, we didn’t score a single goal.”

One of the biggest problems to fix was the squad’s complete lack of confidence. Clement’s defensive mindset must have had an effect on the players, as they looked completely clueless as to what to do on the rare occasion that they had possession in the final third. I can only assume that little time in training was used for practising attacking play. It was so bad that during November, we didn’t score a single goal.

It didn’t quite happen overnight for Carvalhal, but it didn’t take long before his side found their goalscoring abilities. It had got so bad that you wondered how we’d ever manage to score twice in a single game, considering we couldn’t manage one in the month of November. We scored twice in Carvalhal’s opening game, away at Watford, with both goals coming late on inside of 8 minutes to give us a shock victory having come from a goal behind.

And that was the big thing about that first performance under the new boss, we had achieved few things we simply couldn’t do before. Score goals and come back from losing positions.

That 2-1 win was the spark that really ignited the comeback. Suddenly, the players had some confidence to build on, belief that it wasn’t game over when Watford opened the scoring at 1-0 and knew in their minds that they could come back and score 2 goals in a game.

Another key factor in Carvalhal’s revival job was the increased effort and desire from the players. It would be interesting to see the distance covered figures for Clement’s final few games, and those under Carvalhal. We were quicker to press, and there was that extra fight in us to win back possession in games.

Way back in September when we lost at home to Newcastle, Clement was critical of the efforts from his players, and it never really improved after that.

The 3-1 home win against Arsenal was probably the best example of a real team performance that must have topped the distance covered charts for the season. The pressing was superb, and it was Jordan Ayew’s pressing on the goalkeeper that helped get us in front at 2-1.

Swansea City apply pressure in the final third, forcing an error from the goalkeeper to score a goal vs Arsenal

Carvalhal also deserves a lot of praise for implementing better tactics that was crucial to getting us scoring goals again. Clement’s overly defensive mindset and focus meant that we were never in an optimum position to create chances and score goals.

“We stopped the habit of just seeing how many crosses we could put into box and finally began to show some creativity through the middle.”

One of my main criticisms in my analysis features was his instructions for midfielders to split out wide, leaving big gaps through the middle – meaning the lone striker would be isolated and lacking support. Our attacking play was also one dimensional and predictable. Our main attacking “gameplan” was to get the ball wide and to send in crosses into the box, aimed at a striker – Abraham or Ayew – to win headers – when that wasn’t their strengths.

Swansea’s midfield is non-existent against Newcastle under Clement

It was just the same thing over and over and we never had a plan b or alternative approach to getting into goalscoring positions.

Carvalhal quickly changed that. He stuck to Clement’s defensive shape and discipline but instructed his team to counter attack after winning back possession in their own half, kicking long, direct balls down the channels and having three or four players chase them. This worked effectively against Arsenal in particular. It hasn’t just been counter-attacking either. Carvalhal has been able to get his team to have three or four players in the box when attacking whether it’s a counter-attacking move or more of a patient build-up attack.

Midfielders are no long splitting wide to simply assist the full-backs. Clement liked the ball going into wide areas on the attack so it was safer and his team were less vulnerable if they lost possession. Again, Clement always had a defensive mindset.

Olsson has no other option but to cross against Leicester

We stopped the habit of just seeing how many crosses we could put into box and finally began to show some creativity through the middle. Balls were being played into feet, we finally saw a through ball for the first time!

In Carvalhal’s first game at Watford, his team start attacking centrally, with plenty of support through the middle to play

There were so many players under-performing for Paul Clement, but Carlos Carvalhal was able to get the likes of Jordan Ayew, Sam Clucas and Leroy Fer back in form again. Jordan was heavily criticised at Liverpool when we lost 5-0 under caretaker boss Leon Britton, but he has since played a huge part in our revival and escape from the bottom three.

Clucas too has found the net while Leroy Fer’s injury was a big blow after producing some promising performances following the change of manager.

There are some incredible improvements highlighted here. Possession might have dropped, and the number of shots surprisingly too, but this didn’t matter as we finally started to make the most of our chances. We were obviously creating better chances and were more clinical, converting 17.5% of shots into goals, compared to just 6.7% in Paul Clement’s final 5 games in charge.

Goals scored more than doubled, and despite being more positive in attack, this didn’t hurt our defence, as we conceded half as many goals.

Clinical score = Percentage of shots that are scored.

Carlos Carvalhal edges Paul Clement here in the stats that really matters – points, but only by one. But Carvalhal’s job is most certainly more impressive as Clement had Gylfi Sigurdsson and Fernando Llorente to work with last season.

Compared to Paul Clement’s first 5 games last season, we scored only 1 less goal in Carvalhal’s opening 5 matches, but again, Carvalhal deserves praise for not hurting our defensive stability, conceding 5 goals compared to the 9 under Clement.

You can see more stats here

What’s your opinion on both managers? Does Carlos Carvalhal deserve a new contract this Summer? How highly do you rate his turnaround performance this season so far? Let us know in the comments below or get involved in the Message Forum