Potter, Rodon & Fans React To Defender’s New Deal That Keeps Him at Swansea City Until 2022 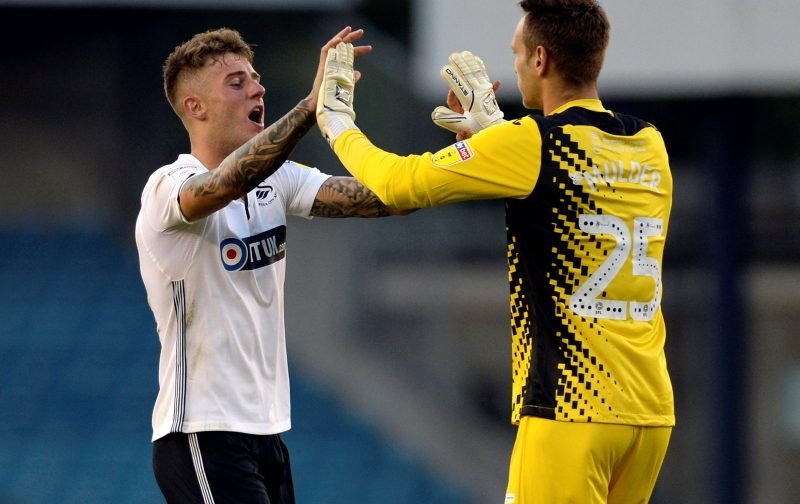 Swansea City fans woke up to some great news on Thursday morning as the club confirmed that 21-year-old defender Joe Rodon had put pen to paper on a new contract that keeps him at the Liberty Stadium until 2022.

Some fans were getting nervous that the Llangyfelach-born centre back could possibly be poached by another club in January as his contract was about to expire in the Summer and there was strong speculation during October that was yet to receive a new offer.

Following the sale of Federico Fernandez this Summer, along with Alfie Mawson and Kyle Bartley, the door of opportunity finally opened for Rodon to live up to his potential having been linked with interest from Manchester City in 2017.

Rodon was regarded as one of our best and most promising youngsters when he was a teenager and so fans were right to question why we waiting so long before offering him a new deal when there’d be no shortage of interested clubs looking to snap him up.

Fortunately, being a Swansea City fan himself and well-grounded too, Rodon recognises that he’s best staying put and says that signing a new deal with the Swans is a ‘dream come true’:

“It’s great news for me and my family,”

“I’m delighted to get it done which means I can now concentrate on my football and look forward to the future.

“The last few months have gone so quickly – reality still hasn’t hit me.

“To get this new deal is another dream come true. I’m looking forward to seeing what the future holds.”

“I want to stay here and take it step by step.

“These are exciting times at the club and hopefully there are great things to come in the future.

“We have youngsters pushing through and hopefully one day we can get back to the top flight.

“Let’s see what we can do under the manager. I want to play as many games as I can for our club.”

Ever since his debut in the 1-0 home win against Preston, Rodon has taken to Championship football like a duck to water. We might have expected him to take some time to get up to speed but he’s been consistent ever since his first ever appearance, forming a very solid defensive partnership with captain Mike van der Hoorn – keeping 7 clean sheets in his 12 starts and conceding just 10 goals.

It’s no surprise then to see that Potter was equally as delighted to hear the news of his new contract:

“It’s fantastic news for everyone connected with the club and I am really pleased for Joe,”

“First and foremost he’s a top lad. We enjoy working with him every day and it’s great to see how he has developed this season.

“He brings everything you want from a modern defender,”

“As a person he’s great – he’s a reliable character.

“Then you look at his football attributes – he can play, he can defend, he’s fast and he’s aggressive.

“He is not the finished article yet, but we feel we can help him become that.”

Potter also heaped praise on the club’s Academy, as well as the fans for supporting Joe since his debut:

“I think we must say a big congratulations to everybody connected to the academy,”

“It’s a big tick for them to see someone of Joe’s quality coming through like he has.

“I also think our fans have helped Joe. He came in against Preston and they got right behind him.

“I think that’s a little extra thing – our fans can help the players individually. I am sure Joe would say he is very grateful for the support he has had.”

Obviously Swans fans were ecstatic with the news, and now we’re all hoping that Connor Roberts follows very soon with a new deal!

Joe Rodon signs a new deal this morning and WalesOnline report Connor Roberts & Matt Grimes are close to completion. Read that out over and over, it’s guaranteed to make the rest of your week.

YES YES YES YES YES!!!!!!
Fantastic news. Need to keep hold of him now and not use the contract as a way for the owners to make more money off another of our assets. Joe could easily be a legend for us in years to come.

Still buzzing about the Rodon contract news earlier. He is going to be an absolute star! Also meaning I doubt he'll get to the end of that contract with us – but we'll certainly enjoy him while he's here.

Brilliant news to wake up to! Still feel Rodon is destined for bigger things than us in the long term and that’s why this is very important. The guy clearly loves pulling on a Swans shirt and loves the club, so refreshing to see, after the past three seasons. https://t.co/7itKgKu8dH