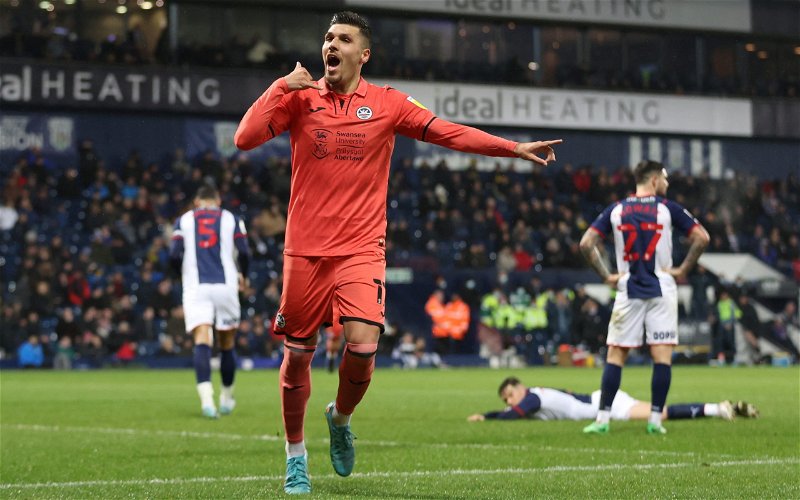 The 3-4-2-1. Russell Martin’s go-to formation has been a near-constant in a season of much change and inconsistency at Swansea City.

As previously mentioned, this features a single, lone striker and, for Swansea City, that position has usually been filled by top-scorer Joel Piroe. Recently, however, fellow summer signing Michael Obafemi has come into some form and has featured in the same starting XI as Piroe – in this article I’ll be taking a look at how this has happened.

Piroe and Obafemi – two summer signings that cost Swansea a combined outlay of around £3m – have started together in the Swans’ last two victories, but they have not played in a front two in those games.

Only once this season have the duo started in a two-up-top system together, that came in the 1-0 win over Blackburn Rovers, where the Swans started in a 3-1-4-2 shape before Ryan Manning was sent off. Their success in recent outings against Bristol City and West Brom, though, has come with Piroe operating alongside Jamie Paterson, behind Obafemi.

While being a totally different profile of player to Olivier Ntcham and Korey Smith, Piroe has taken an almost identical average position to those two names, who have both been used in the role. Piroe has also re-discovered his scoring touch in the new, deeper role – scoring in both games – while Obafemi scored in the win over Bristol City.

The main question, though, is clearly – why move your top scorer deeper to play Obafemi up front?

In truth, there are many reasons why Russell Martin may have done this.

Firstly, the gaffer has been vocal throughout the season about how Swansea need to improve their goal threat. While Piroe has, to date, managed an impressive 15 goals and 4 assists in his debut season in English football, he is definitely not a penalty box number nine.

Six of the Dutchman’s goals this season have come from outside the box and his four assists so far show though that he has the potential to be something of a creative force for Swansea.

Opposition defences often sit deep against Swansea and try to have the whole game played in front of them and, a lot of the time, that tactic has worked this season.

Swansea can lack penetration in the final third and are sometimes forced to take shots from outside the area – having Piroe in an attacking midfield role will give them more threat in that scenario than other players who could fill the role, especially if he can produce more finishes like against Blackpool, Luton and Nottingham Forest.

Obafemi is short, explosive and powerful, while Piroe is tall, strong and cultured on the ball – their attributes complement each other nicely when paired together.

Another worthy point is that Swansea’s penalty box threat immediately increases by having both frontmen on the pitch, even with Piroe in a deeper role.

Both of the Swans’ goals against West Brom on Monday night came from cut-backs – with Olivier Ntcham’s left-footed pass finding Piroe for a first-time finish for the opener.

Swansea will undoubtedly benefit from Piroe being the man to arrive late to the box rather than other players who have filled the role, such as Olivier Ntcham or Korey Smith, who’s qualities are not primarily their penalty-box finishing. It adds another facet to Swansea’s attacking structure – and a very valuable one at that.

On Michael Obafemi – he is a completely different type of striker to Piroe.

Obafemi’s two recent strikes have both come from in and around the 6-yard box and he had a big chance against West Brom from close range that he should’ve done better with. The evidence so far suggests that Obafemi is a bigger close-range goal threat than his Dutch teammate – a poacher, if you like.

The Irish international is also more likely to turn defences and make runs in-behind on the counter-attack than Piroe – a dynamic that has been almost entirely missing from Swansea’s game this season and one that they will need to add in order to become a top team at the level.

The two have completely different profiles; Obafemi is short, explosive and powerful, while Piroe is tall, strong and cultured on the ball – their attributes complement each other nicely when paired together.

If the two do both continue to start, though, then it does likely mean that one of Swansea’s creative player has to miss out.

Jamie Paterson and Olivier Ntcham have been the regular starters behind Swansea’s striker and, unless one of them is deployed in a deeper midfield role, then one would have to miss out every game.

Ntcham and Paterson are similar players, in a way – they both possess great quality on the ball but lack athleticism and dynamism provided by having Piroe and Obafemi both in the front line. It could mean that Martin has to go with a ‘horses for courses’ approach and select his attacking trio on a game-by-game basis – Ntcham and Paterson could play against weaker sides that are more easily broken down, while Obafemi and Piroe could both start against stronger sides to allow Swansea to be a bigger threat on the break.

It’s certainly an interesting dilemma for a young manager in Russell Martin but with Hannes Wolf ready to add to the aforementioned options once he no longer has to fill-in at wing-back, it’s certainly a welcome headache for the gaffer to have.