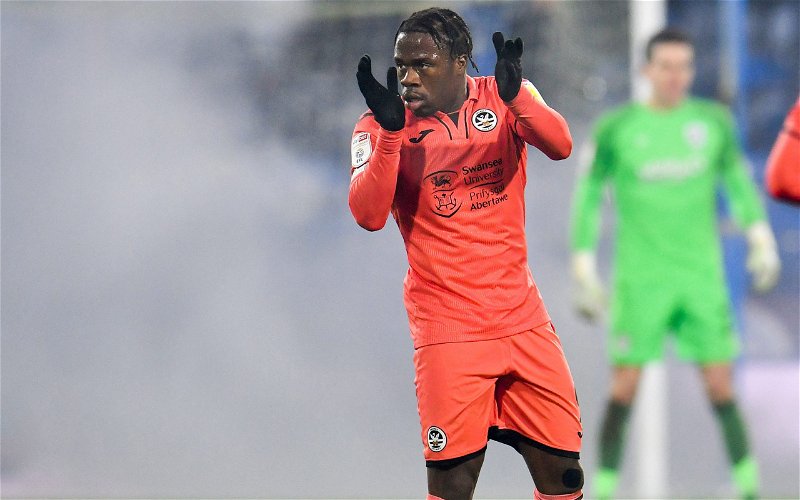 Swansea City striker Michael Obafemi spoke to the Swansea City Official site following his winning goal against Blackburn Rovers on Saturday night and it took quite a few takes to get it right at the Swansea.com Stadium!

It’s best to watch it via the tweet below, some excellent viewing on a Monday morning following a very much-needed Championship win!

The frontman stood alongside Jamie Paterson, and on his long-awaited return the midfielder provided the superb cross for Obafemi to head home. He could barely keep a straight face afterwards as he was asked for his thoughts after the goal and victory!

To say @michaelobafemi_'s post-match interview took quite a few attempts is the understatement of the century 😂😂 pic.twitter.com/HzCAO4TfWT

Just like the rest of his team-mates would say, Obafemi told how happy he was to see Paterson return to action after missing five league matches for reasons we’ll probably never know the full details about.

But that saga looks to be all done and forgotten about now, we can all move on and look forward to seeing Paterson in a Swansea shirt again this season and hopefully providing more assists and even goals to add to his 8 goals and 5 assists tally.

Swansea boss Russell Martin revealed that striker Joel Piroe had surprised Paterson with a FaceTime call after deadline day, showing him some champagne to celebrate that his team-mate was staying for the rest of the season at least.

“Pato was surprised. Joel showed him a bit of champagne and decided to celebrate that he was staying,”

A really nice touch from Joel Piroe and you can just see how much the players appreciate Jamie Paterson and what he does for the team.

Piroe has failed to score since Paterson’s absence and we did some analysis on their link-up play below:

Captain Matt Grimes also praised him on his return:

“We’ve missed him the last couple of weeks, obviously Pato’s health and wellbeing is our main concern. We’re just happy he’s back now and happy playing football and long may it continue.

“I think the performances have been there, just conceded a few sloppy goals, but then obviously bringing this man (Paterson) back and getting the goal today, I thought the lads were brilliant. Hopefully an opportunity to kick on now.”