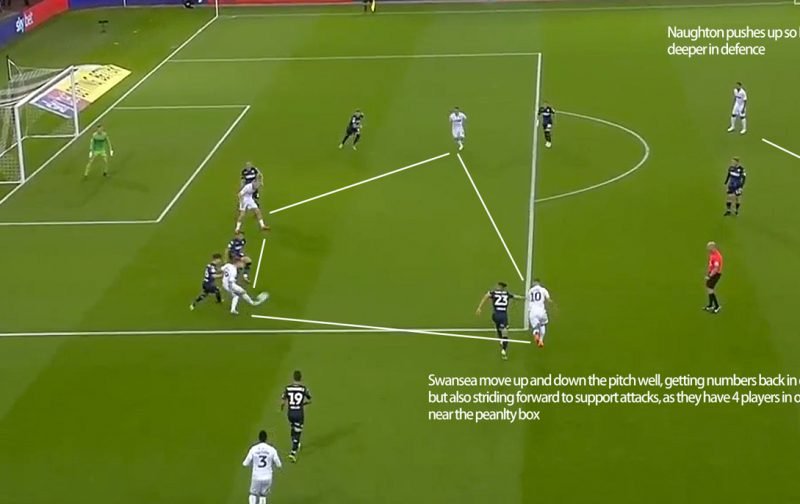 Part 2 of our tactical match analysis of Swansea City’s 2-2 home draw against Leeds United focuses on Graham Potter’s positive attacking tactics, Roberts’ new role and how Leeds were able to grow into the game in the second half and cause problems down our left defensive side.

If you haven’t read part 1, which looks at Graham Potter’s game plan and how they were able to frustrate Bielsa’s side – click here.

One of the most refreshing things to see on display on Tuesday night was the positive, attacking play and none of this ‘defend-first’ mentality that we had fallen into over the last three years or so. In part 1, we mentioned about how both centre backs – Joe Rodon and Mike van der Hoorn had the confidence to make runs out of defence without thinking about the risks involved. They also didn’t retreat back to the defensive line either after making a pass, but instead continuing to move forward to support the attack.

Below shows an early attacking move from the Swans and we can see four players either inside the box or just outside as well as another two waiting within 10 yards or so of it. This was very much a rarity during our last few seasons in the Premier League as we were always cautious about getting caught out of possession if we lost the ball.

Graham Potter, however, has put far more confidence in his team to be effective in these attacking positions and there’s hard work off the ball as soon as they lose it (see below).

With Leroy Fer able to start in the centre of midfield alongsid Jay Fulton, Graham Potter is happier to switch to a 4-2-3-1 formation, allowing Bersant Celina to move further forward into a roaming and preferred number 10 role.

The £4m signing from Manchester City has already shown some moments of brilliance but they were in brief spells in games, whereas against Leeds he was a constant threat and nuisance to Bielsa’s side – so much so that the manager later revealed that he was the reason that forced him to make an early substitution just after our opening goal.

Below, Celina showed his dribbling ability down the right, dodging a tackle and moving into the opposition’s half before sending Roberts on his way down the right as the Swans quickly attack. 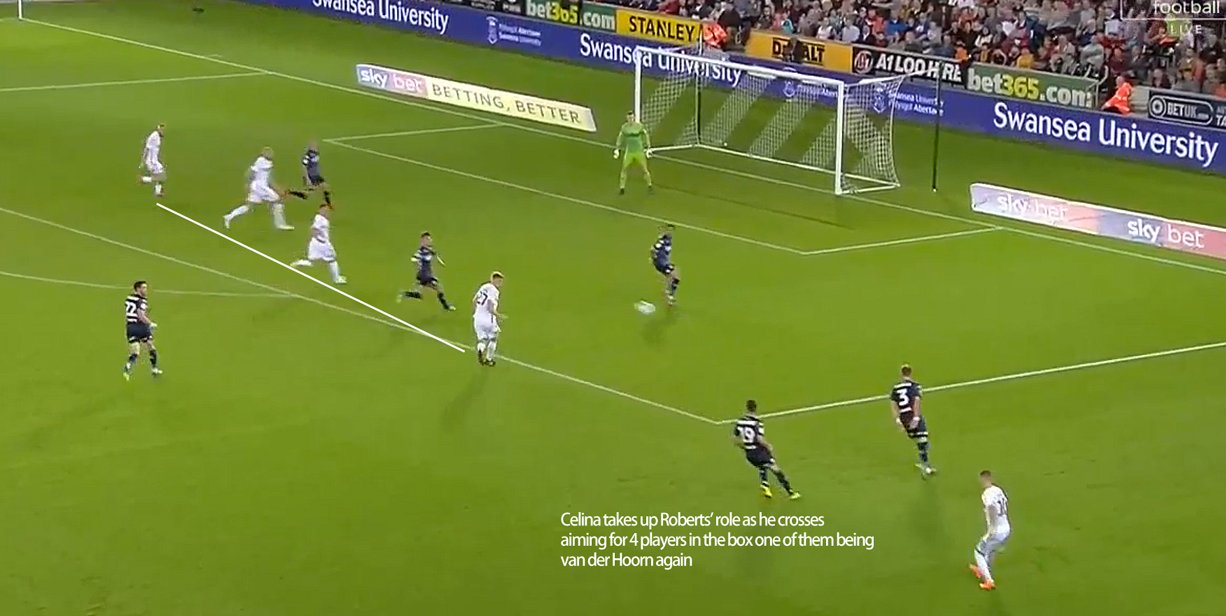 Celina was active in all areas of the pitch, whether it was adding more support for McBurnie through the middle or shifting across to the right or left to progress attacking moves in wide areas.

The screenshots above and below are a typical example. Above, Celina picks up the ball in a deep, left-sided position before making a pass and then making a long diagonal run (below) – helping the attacking stay live as the ball is switched over to the right flank. 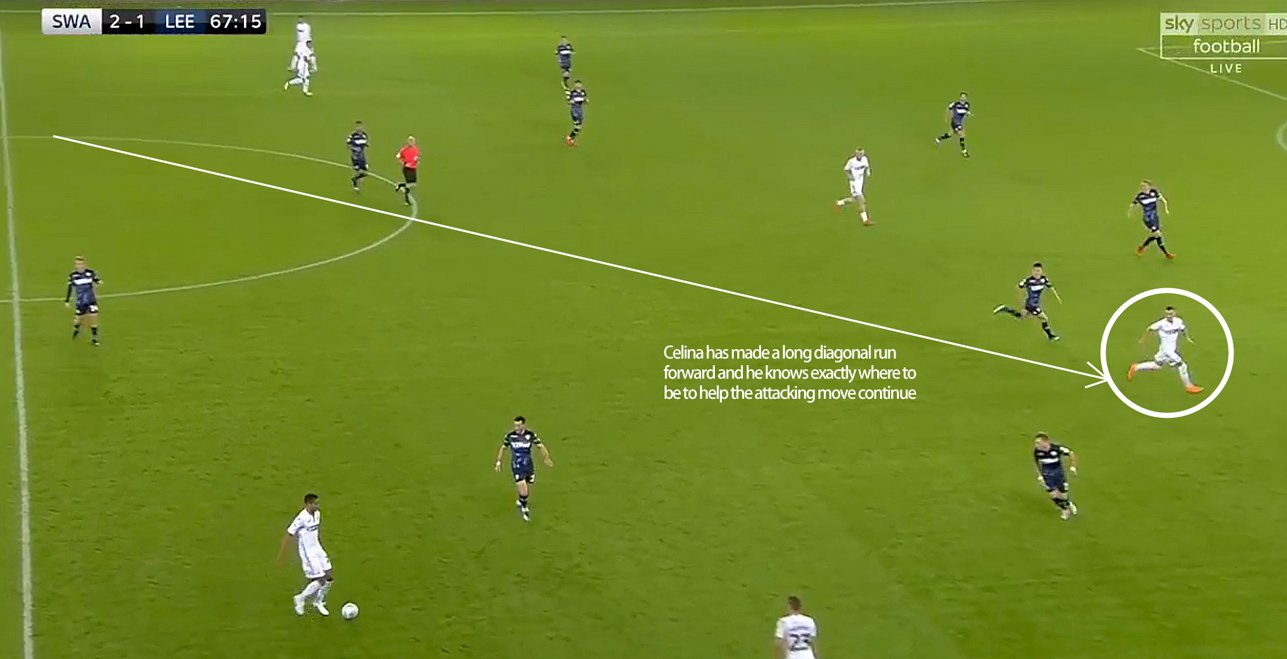 Swansea were effective at quickly moving the ball away from congested areas and into bigger, more open areas of space (below). 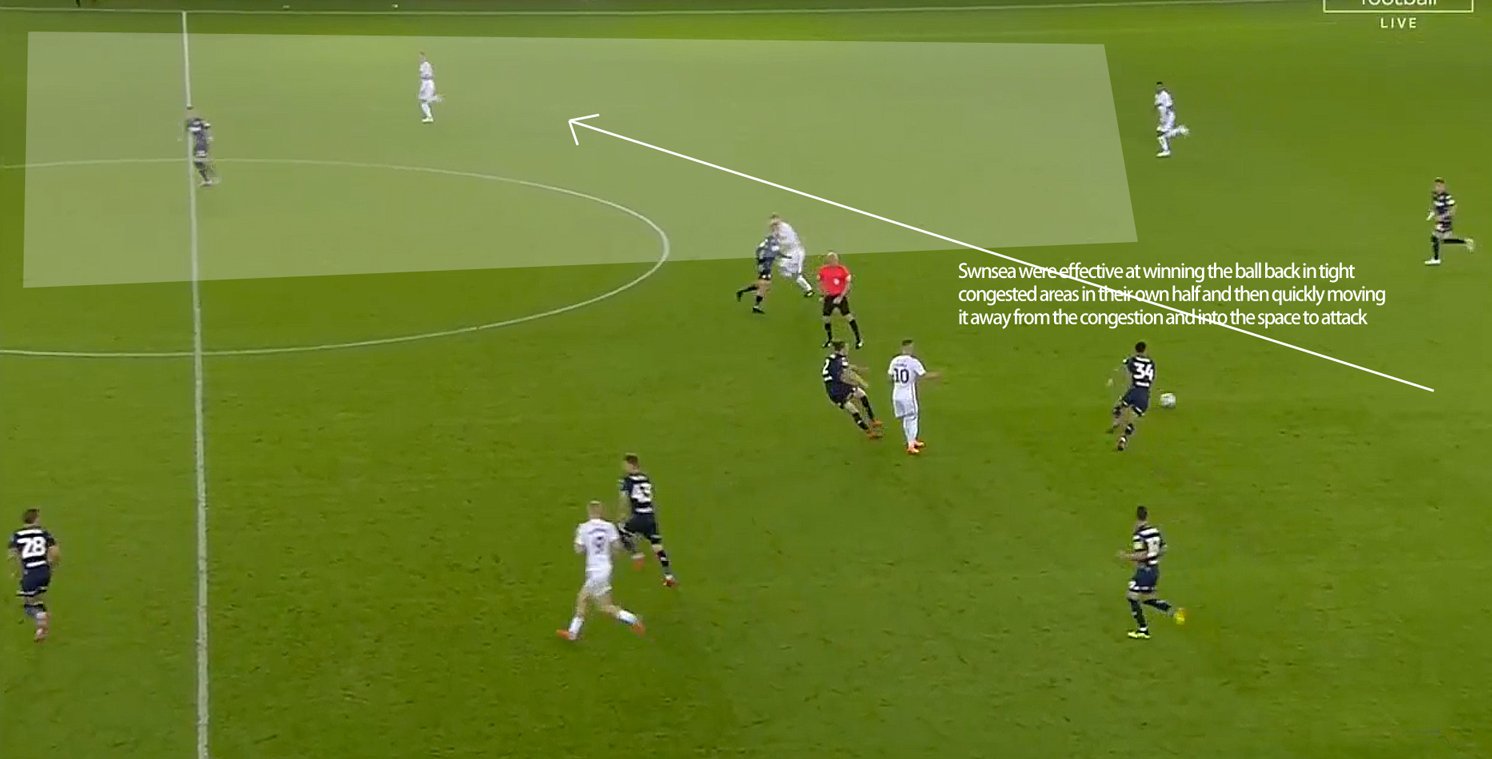 When the teams were announced an hour prior to kick-off, many of us assumed that Graham Potter had switched to a back five in order to contain Leeds’ attacking threat because of the three full backs that featured in the starting 11 but from kick-off we soon realised that the academy product was actually playing in front of Kyle Naughton, who was making his first appearance of the season.

There was a big difference between Roberts’ role and Barrie McKay’s. Roberts’ was a very demanding one that required him to be box-to-box, dropping back to add close defensive cover for Naughton, but also to push right up at the same level as McKay to ensure good attacking balance on the wings.

Below, McKay doesn’t drop deeper like Roberts does, and this affects us down our left side and it was little surprise to see that their opening goal came down this flank. 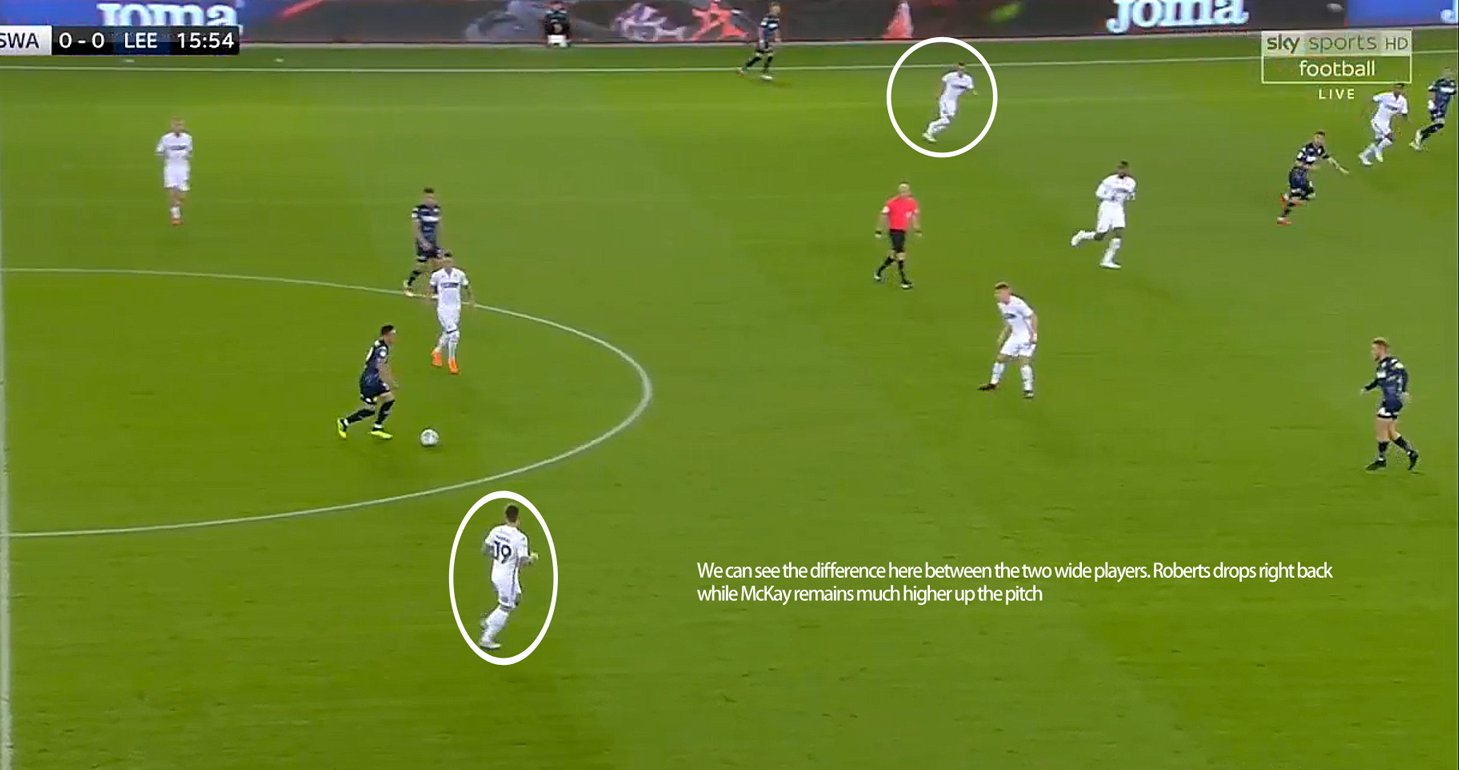 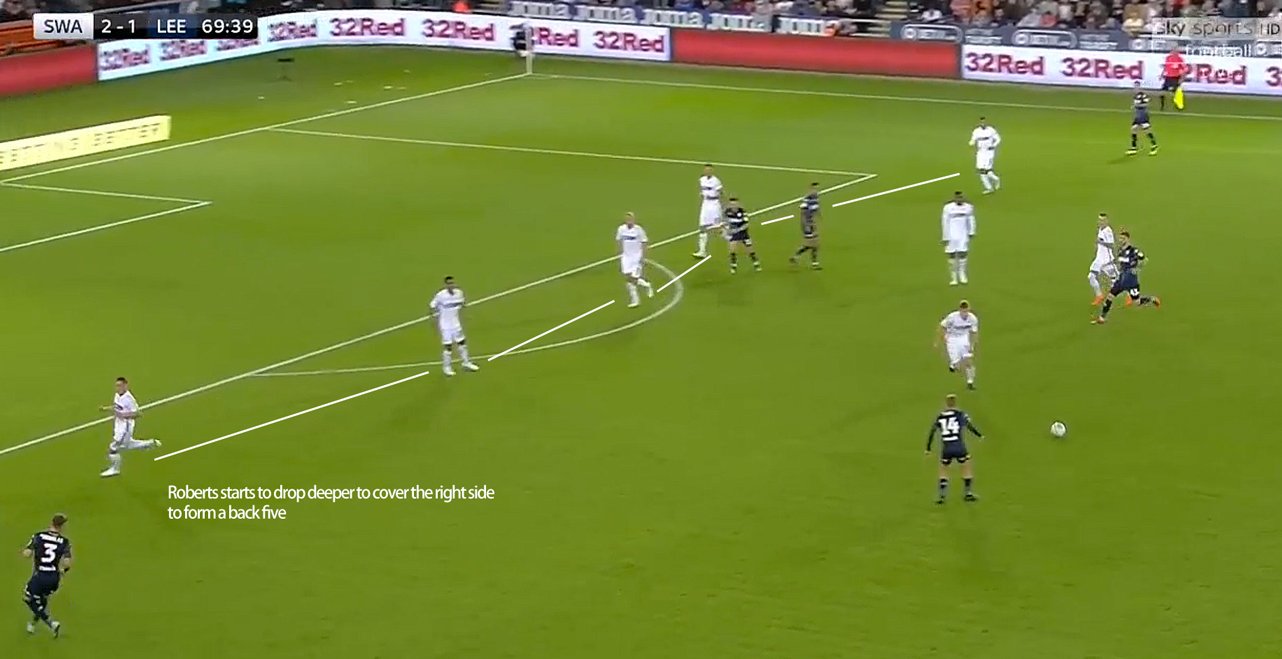 Leeds provided a preview of what was to come as we saw a very similar move down their right with the scores still at 0-0.

Above, Hernandez is in possession and he has the full back overlapping – Olsson has the tough job in having to cope with two players running at him without any support. With McKay staying up field to offer an outball option (this was key to the first goal), he needs Leroy Fer to come across and help limit the threat.

Eventually he does (below), but by that time, Hernandez has fed the full back who makes a low cross into the box but this time the goalkeeper can easily collect. 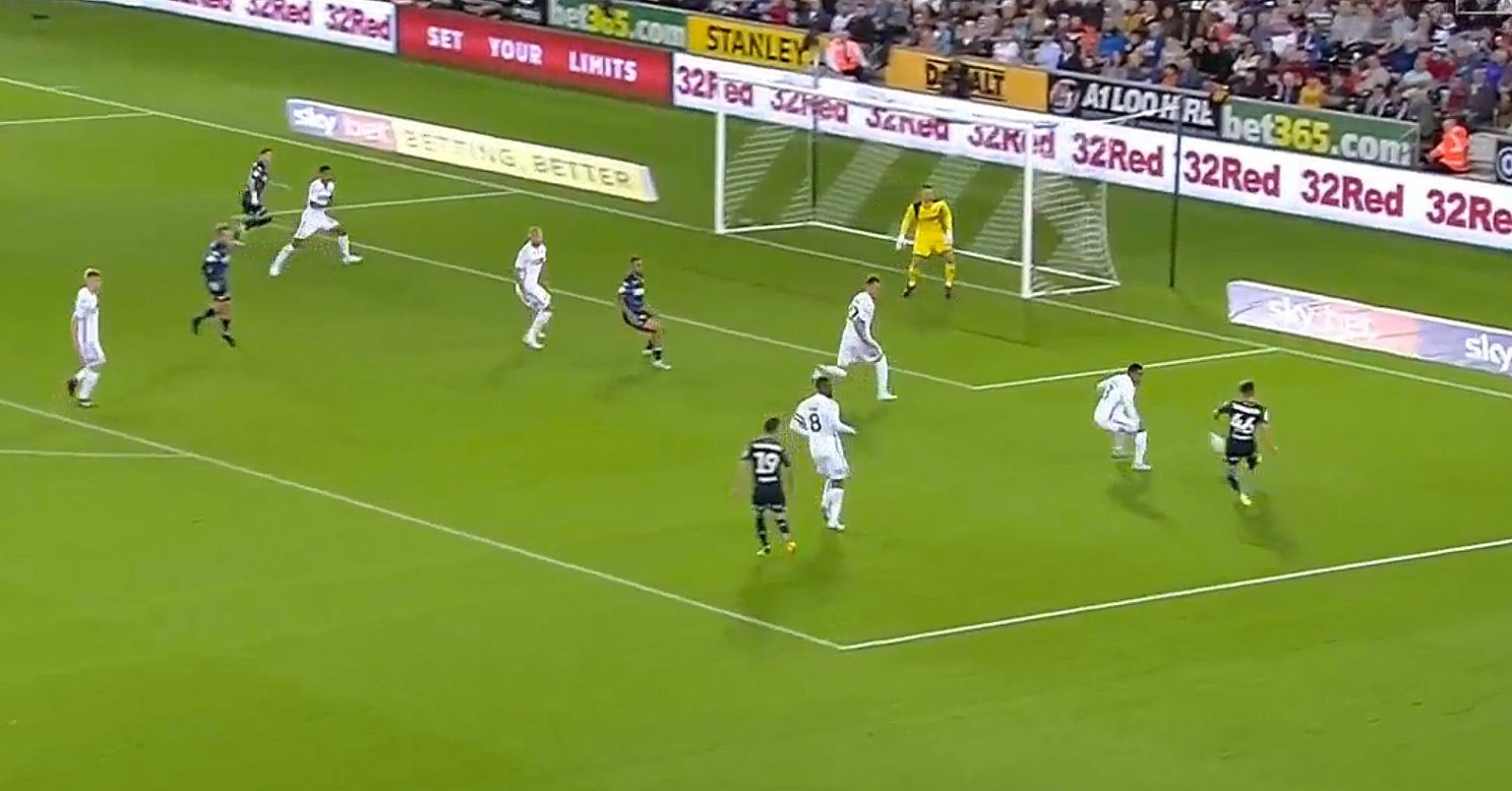 Leeds United go one better after 40 minutes as they find themselves in space down their right side again. Former Swan Pablo Hernandez started to move inside and off his right flank, keeping both Fulton and Fer occupied in the middle (below).

Below, it’s one vs one but Olsson backs off and backs off, inviting the young Leeds full back to attack and move into the box.

By the time our left back finally commits to attempting to stop a cross, the low cross comes in across the six-yard area and Roofe is able to get through and in front of both van der Hoorn and Naughton to easily score from a couple of yards out (below). 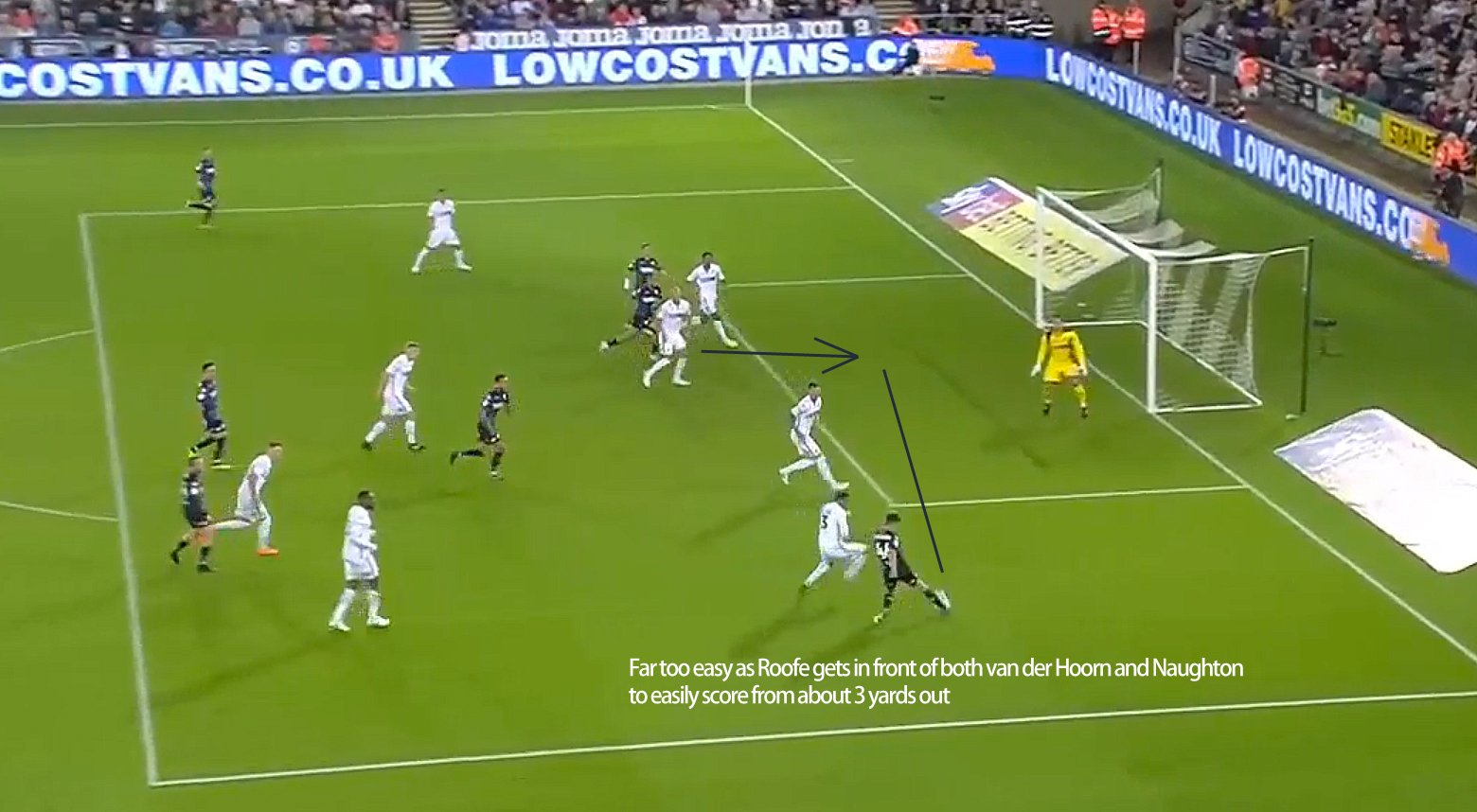 Swansea’s vulnerability on their left side continues

Swansea’s lack of defensive cover down their left continued into the second half and Bielsa’s side looked to build on their late first-half equaliser with a quick start to the second.

Again – below, McKay doesn’t drop back like Roberts was on the opposite side and therefore the large areas of space open up for Leeds.

Below, Leeds slip a ball around the side and now Olsson is now facing two Leeds players coming at him yet again.

Graham Potter later realises this and makes changes to limit this space. Jefferson Montero comes on and he was clearly instructed to drop deeper to add defensive support, but of course he was quick to race forward when his side were back in possession. 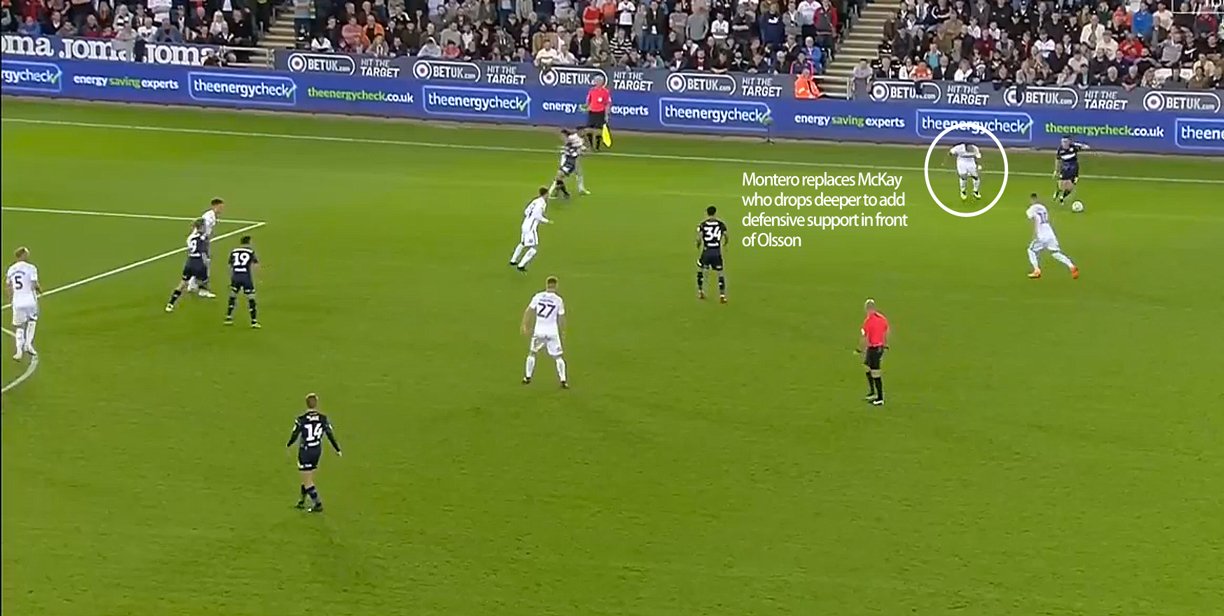 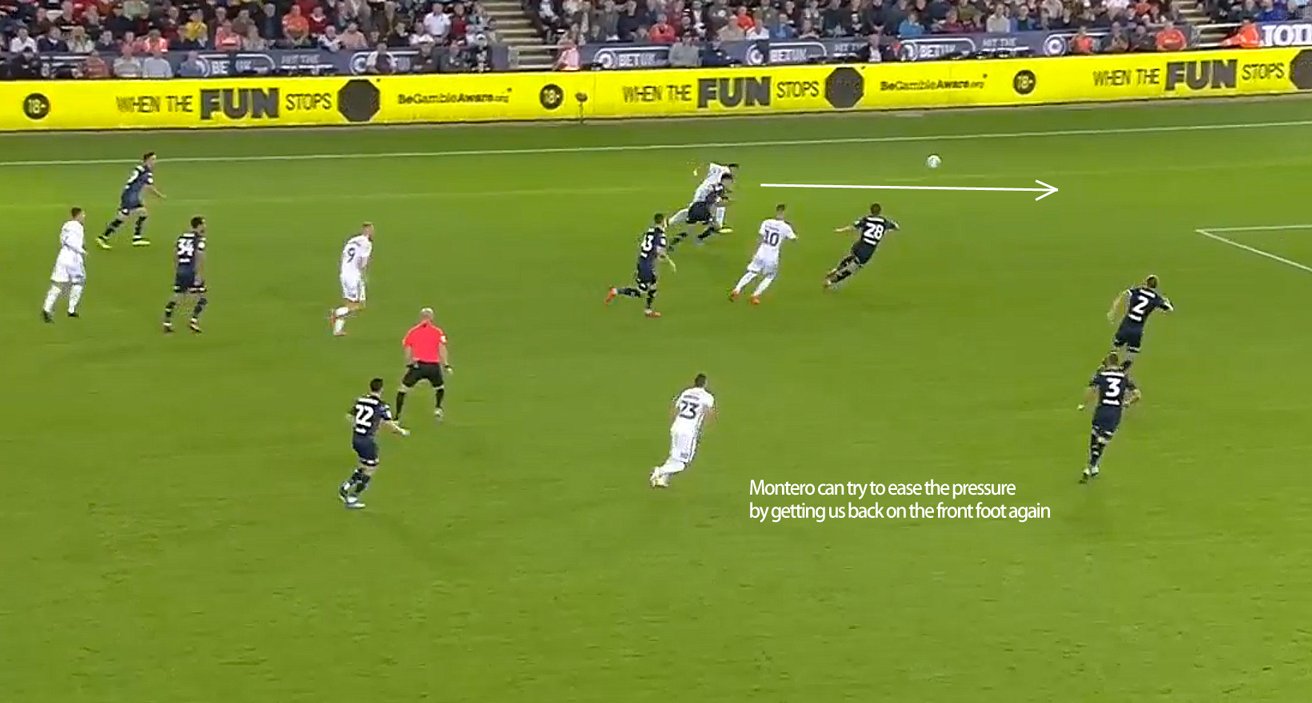 After plugging the gap down their left, the goal actually comes down Swansea’s right side. With both Naughton and Roberts pushed up where the ball is about 15 yards inside Leeds’ half, van der Hoorn has to come across to mark substitute Bamford. Despite outnumbering Leeds 3 vs 2 inside their half initially, they’re still able to send the ball down their left flank and after van der Hoorn over commits to the challenge, Bamford can run through in behind. 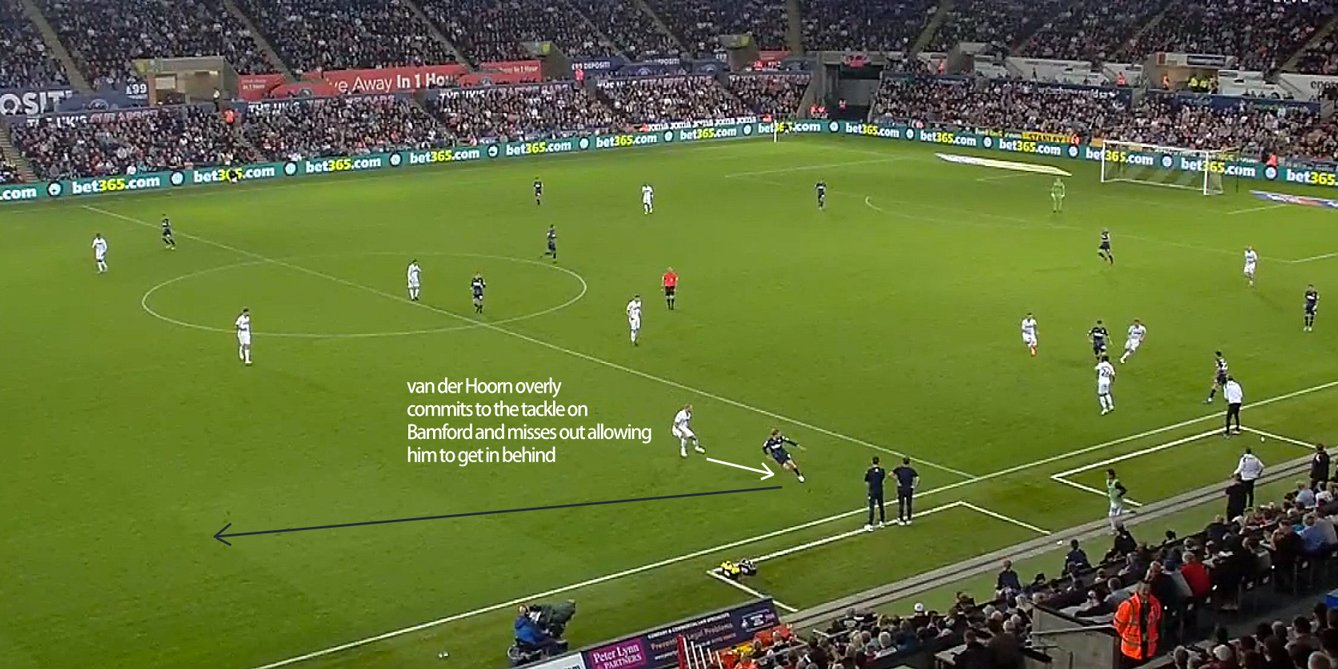 Further errors follow, Rodon somehow misses a clearance chance and then Olsson, who, despite being goal side of the goalscorer Hernandez initially, soon loses his man and the former Swansea player meets the ball first to direct it past Mulder and into the net. It was a great finish, but there was a catalogue of errors leading up to it from Swansea’s point of view.