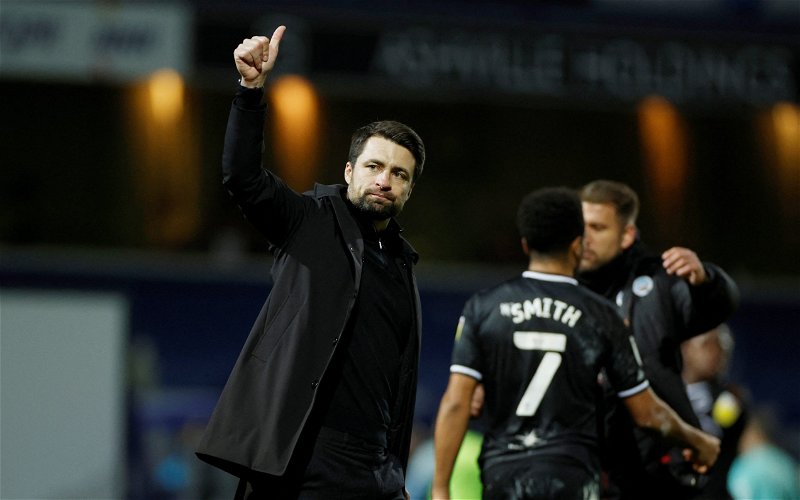 The Swans boss told how he arrived at the club just four days before the opening game of the season away at Blackburn Rovers. That was far from ideal. He didn’t have a chance to build his own squad, train the team a completely different way to play and have a full pre-season including friendly matches and a full Summer transfer window.

“We are not here to have a smash and grab season where we win and we don’t understand why or we just get lucky or we have one player who is on brilliant, brilliant form.” – Russell Martin

He’s been playing catch up ever since. The January transfer window is also not the best one to do business in, particular for a club like Swansea City which Russell Martin said had the budget which was probably less than the top thirds in the division.

He was given the job to deliver a long-term project and many of the things he told the press on Tuesday night sounded like a nod to the previous endevours of former boss Steve Cooper who many fans thought didn’t implement much work that would help us in years to come. It was more about getting the highest quality loans in working with a top player like Andre Ayew to get to the Premier League.

This season is a complete contrast to that.

That one quote highlighted above sounds like Martin is describing what it was like under Steve Cooper. A smash and grab season, not playing great football but trying to do enough to win games and get promotion via the play-offs but it wasn’t to be. ‘Winning games when we don’t understand why’ – many times will have commented on social media after victories – “How did we win that!?” having had one or two shots on target where you could argue we had a lot of luck. We did have that “one player” too in Andre Ayew who helped, alongwith some excellent Premier League loans to maintain a good push for the play-offs.

“This year was always going to be about trying to develop and create something that the supporters want at this football club.

“My understanding of the history of this football club is the style of play is ver, very important.”

“We are not here to have a smash and grab season where we win and we don’t understand why or we just get lucky or we have one player who is on brilliant, brilliant form.”

We’re here to develop a team of players that improve over a long period of time. I was really honest with everyone that this wasn’t going to happen quickly. It doesn’t change my belief of what we’re doing here.

“Nathan [Jones] has been with that group of players for a long time. They’ve recruited for what they want to do. It makes a big difference, and give us that time and I’ve got no doubt that we’ll be very successful.”

But this season and those following are going to be different and Swansea City fans need to be prepared for that. He spelled it all out in the post-match press conference. He also spoke about the realities of our situation compared to the big spenders at the top of the division. We no longer have parachute payments, wealthy backers or a huge budget. We have to spend low and try to be clever with our spending.

“Our budget is really low in the League. No one has come out and said that, and it’s not a lie.”

“I wasn’t lied to when I came in and I understood how tough it was going to be.

“This year was always going to be about trying to develop something that the supporters want at this football club, that’s my understanding of it.

There is the reality of the situation then. Are Swansea City fans prepared to be patient and restore faith in that management team that they can deliver in the long-term? There were boos at the full-time whistle which I felt were very harsh, to say the least. Some, a few, but some fans are calling for a new manager which is even more ridiculous. We have to give him a chance to get a full Summer of preparation and a transfer window to try and push on next year.

Then we’ll see where we’re at.