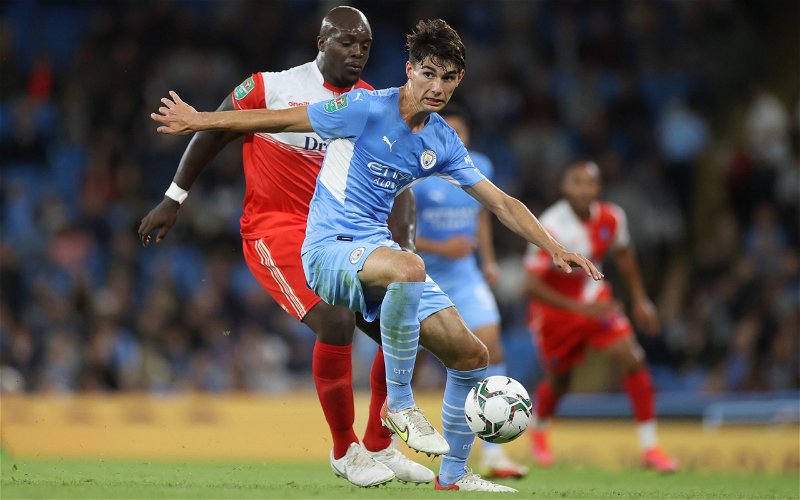 The Swans boss was quoted in Wales Online as saying:

“Fin is an outstanding young player. It enables one of our players to go out and play. Hopefully we will help develop Man City’s player,”

Brandon Cooper has completed his loan move to Swindon Town which leaves a space for Burns to arrive in South Wales.

It’ll be interesting to see where Burns fits in for the remainder of the season. He’s only 18 with very little senior experience so I’ll expect he’ll be a backup option initially.

In the little experience Burns has had at senior level, he came up against former Swansea striker Adebayo Akinfenwa in September 2021 in a cup game against Wycombe Wanderers.

Talking of the experience, Burns told the Manchester Evening News:

“It was a battle that I’ve never experienced,”

“I’m used to people my own age and a similar build so coming up against someone like Akinfenwa who is double the size of me and bullying me a bit … it was a great experience and definitely something I’ve learnt from.

“I just need to take what I learned from that game into future games. There were a few times at the start where I thought I was going to try to win the ball but sometimes you’ve just got to let him bring it down and accept I wasn’t going to win the physicality.

In other transfer news, it doesn’t look like the Swans will do much more business on deadline day tomorrow (Monday), although there’s been talk that at least one other signing is expected; we’ll have to just wait, see and hope for more arrivals as Saturday’s defeat at Hull proved how much we need to strengthen the squad.