Is Swansea Striker Staying? He’s Had a ‘Long Chat’ With Potter 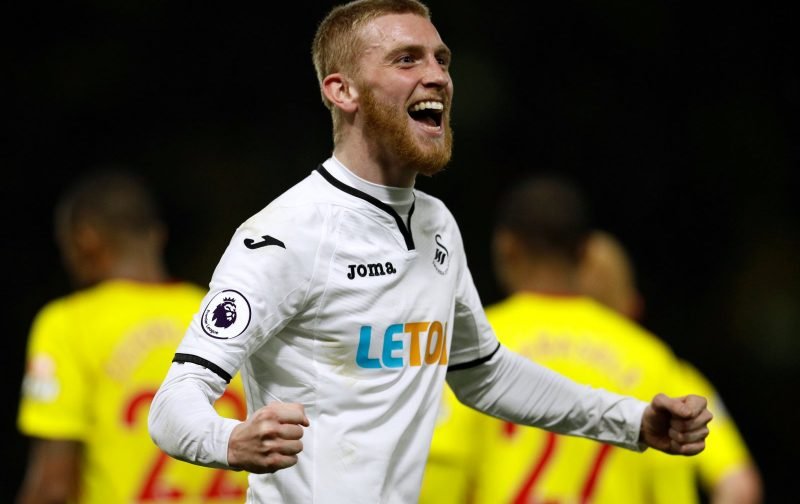 Oli McBurnie’s Swansea City future has been long-debated on Twitter this Summer with early reports suggesting that fellow Championship side Leeds United and SPL outfit Rangers would be battling it out for his services this Summer, but it looks like the Scottish international is looking forward to the 2018/19 season with the Swans.

It was thought that the 22-year-old would be open to a move to either club. He supports Rangers and was born in Leeds, but in an interview today, McBurnie revealed that he’s had a ‘long chat’ with Graham Potter and is excited about the new season.

McBurnie has been posting a few cryptic tweets this Summer and deleted his most recent one, where he said “You shouldn’t believe everything you read” – possibly suggesting that speculation about him leaving isn’t true.

Swans fans have been hoping that he’ll stay after his goalscoring form on loan at Barnsley last season where his 9 goals in 17 appearances earned him the Player of the Season award. Most of those goals were also scored from a wide left position for a relegated side, so it makes you wonder what he could do in the Championship with us if he’s played in his preferred position up front.

“I have had a chat with the new manager this week – we had a long chat about football,”

“He is a really intelligent guy who seems to love his football.

Talking about next season, McBurnie added that he’s hoping for more opportunities here, having struggled to earn a place last season in the Premier League.

“I hope there will be more opportunities for me this year,”

“I had a little taste here and there under different managers last season.

“I think it was definitely the right time for me to go out on loan and get some consistent first-team football under my belt.

“But now I am fighting to impress the new manager here and I can’t wait for the season to start.”

The Swans are currently lacking out and out strikers. They relied on Jordan Ayew last season but he could leave this Summer after we rejected an £8m bid from Fulham. I suppose his future here all depends on whether or not a club offers our valuation for him. Borja Baston, as revealed during Thursday’s ‘Meet Graham Potter’ evening, is still in Spain and looking for a move so it’s safe to say that he won’t be playing for us next season. Wilfried Bony won’t be fit until September or even later while Andre Ayew is expected to join Besiktas on a season-long loan.

Strikers are a must in terms of strengthening this Summer, but the midfield and defence are equally as important.

One Reply to “Is Swansea Striker Staying? He’s Had a ‘Long Chat’ With Potter”