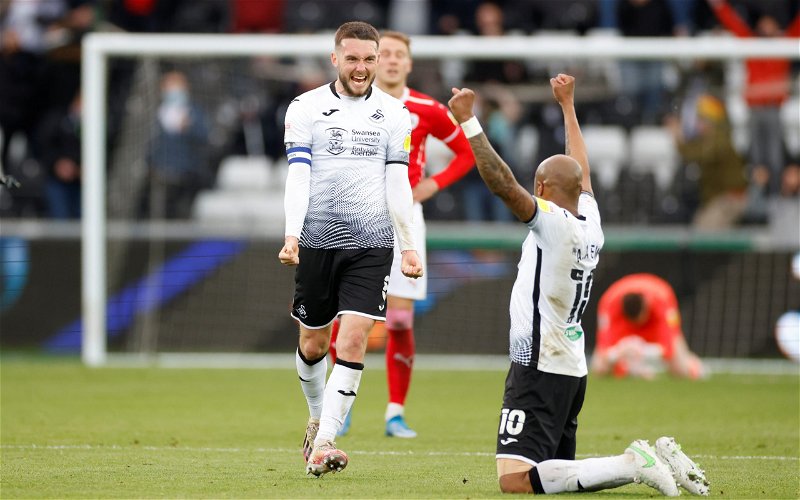 Swansea City captain Matt Grimes has been a first-team regular now ever since the club dropped down to the Championship but there are still some supporters who are adamant that he’s just an overrated midfielder who simply passes “backwards and sideways”.

As you can see below, Grimes has played the most accurate passes in the top four tiers, 637 more passes than the next highest player – Fulham’s Tim Ream. It’s also worth a mention that Kyle Naughton, now playing in the middle of a back three, is third with 1,653 accurate passes.

The tweet quickly prompted some Swansea City supporters to question what kind of passes these were or to point out that they’re easy backwards or sideways passes.

That just couldn’t be further from the truth.

The 26-year-old is an integral part of Russell Martin’s system and style of play in South Wales. He’s the main link from developing play from the first phase into the next few phases. Yes, whilst many passes will be sideways or backwards, Grimes is still contributing in more advanced positions, getting the ball into wide areas as well as progressing the ball into the final third and penalty area.

And as we pointed out in our analysis of striker Joel Piroe, no other Swans player has found him successfully with a pass more so than our skipper.

You can also see how well he performs in some of the passing metrics in his profile courtesy of @SwansAnalytics below:

Quite a few comments on this asking how many of those 2,375 passes were backwards? @Matt_Grimes8 – Well above average for Progressive Passes per 90, xA, Succ. Passes to Pen Area, Fwd pas accuracy %… the list goes on. https://t.co/L4KVwkaAx2 pic.twitter.com/767nIzY6JH

Matt Grimes is among the very best performers in the majority if not all those metrics mentioned above.

Progressive Passes is the go-to metric though to debunk this rather popular myth. A wyscout metric they define as: ‘A forward pass that attempts to advance a team significantly closer to the opponent’s goal.’

On average, Grimes plays or attempts around 9 of these progressive passes per 90 minutes.

In the entire Football League, only Bradford City’s Elliot Watt (439) is a central midfielder who has attempted more progressive passes than Matt Grimes (411) this season.

If we only look at successful progressive passes, Grimes is way out in front of any other central midfielder with 312, Watt follows next with 286.

If we then look at the Championship only, Sheffield United’s Oli Norwood is second to Grimes with 70 fewer successful progressive passes (242).

And we just thought we’d also include this wonderful piece of skill from Grimes during Tuesday’s 0-0 draw at QPR, which was followed by a forward, progressive pass!