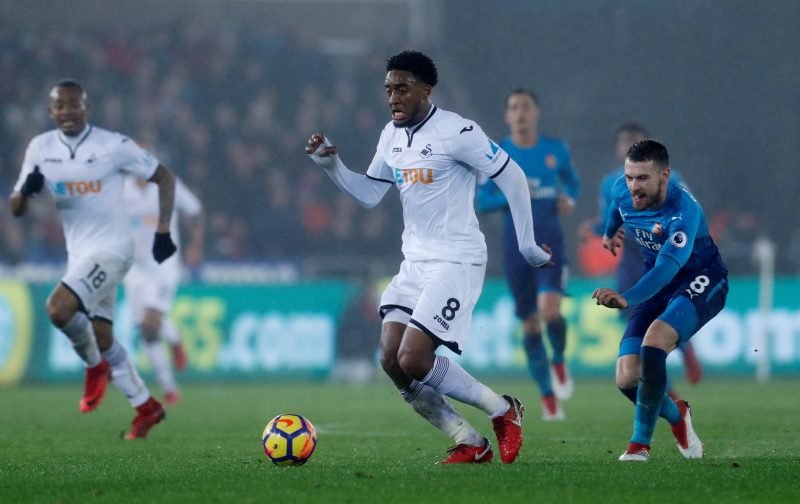 A few eyebrows were raised last month when Leroy Fer, still side-lined by a ruptured Achilles tendon picked up at Leicester in February, was included in the squad for our pre-season tour of Austria and Germany, but now we know why.

Graham Potter announced after the Swans’ opening day victory at Bramall Lane that Leroy Fer would be taking on the role of club captain this season, with fellow Dutchman Mike van der Hoorn selected as vice-captain.

At a glance it might seem an unconventional choice and they were certainly more obvious candidates within the squad – Federico Fernandez and Wilfried Bony both captained the side last season, while Jordi Amat did so on a few occasions throughout pre-season.

However, unlike many seasons before there was no obvious choice. Following the departure of Angel Rangel and retirement of Leon Britton, the only real long-term options remaining are Nathan Dyer and Wayne Routledge – neither of who are likely to feature regularly this season.

Eventually, having taken the whole of pre-season to make his choice, it is clear that Graham Potter’s decision to hand Fer the armband was not one taken lightly.

“Leroy and Mike are captain and vice-captain…Leroy was not available today because of injury so Mike did the job. I have been pleased with Mike as a character and as a player as well. It’s not something he has done before, but it’s a role I think he will grow into… I made an assessment of the group and those two seemed to be the right choices for me.”

The perfect mix of an experienced pro and a young, exciting and lively personality both on and off the pitch, Fer will likely hold the respect of his teammates both new and old. His friendly demeanour makes him an older-brother-like character in the dressing room, which could be exactly what this young Swans’ side needs in a club-captain.

His recent feature on Swansea City’s YouTube channel, Leroy Cam, showed not only the connection he has with the rest of the dressing room but also with the fans.

Fer quickly became central to the plans of Carlos Carvalhal before injury struck last season, and the midfielder remained in Swansea over the summer to work with Swansea’s medical staff and strengthen his Achilles. Speaking in an interview on the club’s YouTube channel last month, Fer said:

“If everything goes right, hopefully I can play games in the beginning to the middle of September. But I don’t put a time frame on it, I just want to be strong and be fit before I can play again.

“I want to play football, I want to enjoy life. I pray and I work hard, that’s the only thing I can do so hopefully I’ll be back soon.”

He splits opinion on the pitch, but will no doubt be a key player to Potter’s side when he returns from injury.

How The Fans Reacted To The News

Leroy Fer the new club captain, interesting decision but in Potter we trust

Interesting that Fer has been selected to be captain, not disagreeing about the choice but wonder how Fernandez feels about it

Fer captain is…bold. Definitely gonna push him to growth, maturity and responsibility. Everything he was lacking.

I’m not too enthused about Fer being appointed captain but don’t really care about that tonight. Nothing can dampen today’s result. That winning feeling is goooood. #UppaSwans

Leroy Fer to be captain this season then. Can't say I'm overly sure about that one.

Not seen anything in Fer to suggest he’s captain material. Sometimes dynamic in attack but awfully lazy and/or pedestrian in defence.

How can you not want Leroy as captain, he’s a massive figure in the squad has good experience, is well respected and loved clearly by all the players and he’s one of the most vocal players on the pitch