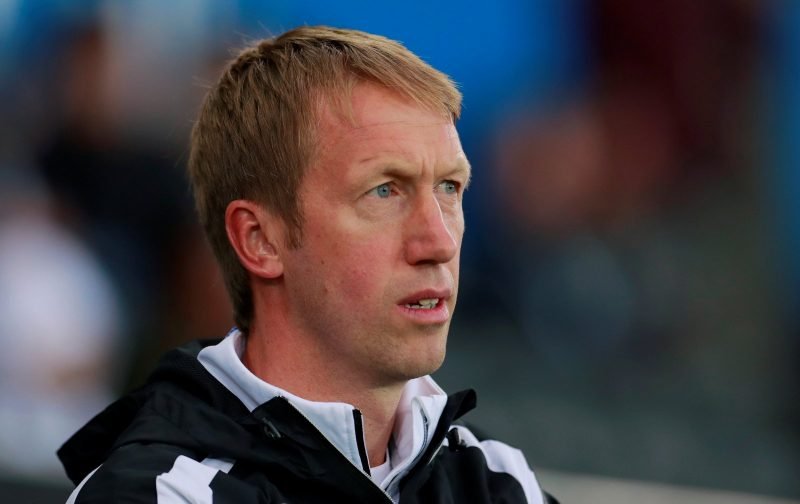 With the loan transfer window set to close on Friday and the Swans set to travel to Millwall for another Championship game on Saturday, manager Graham Potter gave his usual Thursday pre-match press conference and already some fans are predicting his words as he inevitably gets asked questions about possible new signings.

There was disappointment and frustration following August 9th’s transfer deadline day when the Swans saw three players leave and none coming in. Ryan Woods never came – later joining Stoke City and there looks to be more frustration this week as it doesn’t appear that we’re any closer to bringing in players and will, therefore, have to work with what we’ve got until the New Year.

Was Graham Potter fully aware of what was to come when he put pen to paper on a three-year deal in June?  He was used to working with limited resources in Sweden, having struggled early on to attract players initially when Ostersund were in the bottom division but did he expect similar circumstances when he committed to making the big move to English football?

Potter did an outstanding job in Sweden to guide Ostersund through the leagues to the top division before enjoying a Europa League spell with wins against the likes of Arsenal and Galatasaray. What was most impressive is how he did it – developing a number of new players who were at a crossroads in their careers. Players that Potter mentioned in his press conference today that he helped develop and joined him in their rise up through the Swedish football system.

“I would count around 27 or 28 players who have indicated they want to be here. That’s a lot of players and I have to take them down to 11 and there will be guys who will still be disappointed not to make the 18. I had a player in Sweden where I had a young player who was in Fourth Division in Sweden and went on to play against Arsenal in Europa League. It’s about development.”

9 of them made their full debuts on Tuesday night and another 3 have basically been ‘unavailable’ for selection as the club is trying to offload them!

Back in the Summer when he took the job, Potter said he wasn’t moving from Sweden “just for a job”, and explained:

“I’ve always been attracted to something that is about building and creating,”

Much has been said over the last few weeks about how Graham Potter must be disappointed and let down by the owners and the severe lack of transfer activity. During meetings with our owners, was our manager told that all the high earners would be sold? Around 15 players would leave? That we’d only replace them with three or four first-team signings, spending 10% of our transfer income, sign one loan player and rely heavily on our under-23 players to make up the numbers?

Many other comments on social media have also mentioned about they expect Potter to “walk” given our dreadful transfer dealings this Summer and that some fans “wouldn’t blame him” if he did. Now, from a selfish point of view, I sure hope he doesn’t, and I also don’t think he will.

I don’t for a minute think that the owners explained to him a couple of months ago what the exact realities would be and the sort of squad he’d find himself working with come the end of August, but I do think he was aware that this was all about a long-term project and one that he sounds like he’s willing to take on.

When asked if he had enough support from the board, Potter said he had “no complaints whatsoever”:

“I have no complaints whatsoever, we are in a position where we are adjusting to what has happened over last two or three years and that is the position we are in now. I try to be as positive as I can and put out a team that people like and want to get behind. That’s the core part of it and the reaction v Palace was good and the supporters were good and happy with what they saw. Our job is to improve and win more matches.”

Despite being left with one striker, one senior centre back – plus a loan signing and a lack of depth in midfield, Potter was in a defensive mood as he answered questions from the media. We’ve heard and seen it before from a number of our previous managers – who were all pretty much regarded as ‘yes men’. If you think of the likes of Francesco Guidolin, Bob Bradley, Paul Clement and Carlos Carvalhal, they never complained about a lack of transfer activity despite it being pretty obvious that they had little to no control over which players were coming in or out.

That’s a great point. All our managers in recent years have been hung out to dry one way or another. And if anything Potter’s reputation hasn’t helped him one bit – it’s clearly seen as a valid reason not to back him financially.

Some supporters may think, especially after today’s comments from Potter, that it’s actually the same thing again – despite it being confirmed shortly after his appointment that he and his staff would take over the player recruitment process. I’m pretty confident that that is the case, but it’s of little use when our owners won’t even allow signings to happen in the first place because of tight financial constraints they’ve now put in place. Yes, we’ve brought in Celina, McKay, Asoro and John, but we needed more after seeing around 15 players or more leave.

Our owners will have an answer for every accusation that comes their way. Asset stripping? – “No, we’re securing our financial future and filling a huge revenue gap of £65m”. No care for the squad quality and depth? – “Potter has a track record of developing players and improving them. We saw against Crystal Palace that we have youngsters who can compete at this level.” You name it they’ll have an answer, and it seems like Graham Potter has answers of his own too.

They must have loved seeing some of our younger players coming through and impressing against Premier League opposition. I did too but you still can’t hide from the fact that experienced players are needed to get us through a long, 46-game season.

Sorry vital but no. There’s absolutely no way he was told this. He even said in last press conferences there’s money to spend when there clearly isn’t. There’s bringing in a few under 23s then there’s our entire academy being our backups. Bet the board loved tuesday.

One thing I don’t like seeing on social media is constant talk about Potter and how he should walk, or that they wouldn’t be surprised if he did walk. I actually would be. Like I said, I don’t think he was told the exact story of where we now found ourselves in – such an imbalance of ins and outs, but I would still like to think that he wants to see this project out. Call me overly optimistic on that front or naive, but I just don’t think Potter is the type to just up and leave when the going gets tough – especially so early in a job.