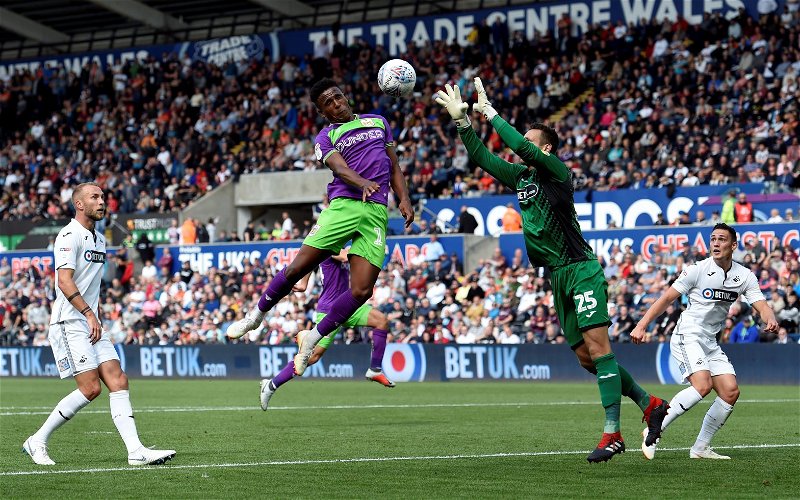 Swansea City manager Graham Potter spoke about his two goalkeepers at the beginning of March, saying that he has “two number ones” but I would guess that the vast majority of supporters would argue against that claim.

After the 2-0 home win against Bolton Wanderers, Graham Potter said:

“What he did, he did well [Nordfeldt]. He showed some courage in his passing in one of those games where he didn’t have too much to do. It’s important as a goalkeeper to ensure that when you are called up on you do well and I think he did.  He played today so he’s the preferred number one today, but l think I’ve got two number ones. I’ve got two goalkeepers that can play in the Championship that can help us. They have slightly different attributes, but I’m pleased to have them both.”

Some fans suggest that neither are good enough to claim the number one jersey, as the gaffer has switched back and for between the two shot-stoppers, with injuries affecting the progress of both players this season. Not exclusively injuries though, as Potter has switched between the two independent of injury concerns, dropping Mulder surprisingly at Wigan in October before dropping Nordfeldt after his performance at Rotherham about a month later.

Kristoffer Nordfeldt got the nod ahead of Erwin Mulder for the number one jersey at the start of the season but an injury in only the second league game of the season gave his Dutch team-mate a run in the side. After a good run of performances, it was expected that the 30-year-old would nail down his place.

However, Graham Potter delivered a shock, and not for the first time with his first-team selection at Wigan by restoring Nordfeldt as his number one after an eight-match absence, missing three due to injury.

To summarise the two goalkeepers’ spells this season, below is a quick table outlining each goalkeeper’s run and some key stats:

Before we summarise some of the data above, we have to insist that it wouldn’t be fair to focus on stats like win % and the like. Goals conceded and clean sheets again are better stats to look at when comparing goalkeepers but again, you defend and keep clean sheets as a team with extra help from the defence and midfield in particular.

It’s been widely commented on social media that Erwin Mulder’s confidence looked to have dropped in his second spell. He kept five clean sheets in 9 games in his first spell and you could count that as 6 if you include the 75 minutes he played at home against Preston when he replaced Nordfeldt.

However, only three clean sheets followed in 16 games in his second and final spell in the starting eleven. But again, that’s not solely because of the goalkeeper. As a team, our form dropped and we started leaking goals and looking solid in the first couple of months.

A better and fairer comparison of the two goalkeepers would be to look at their goalkeeping stats, punches, high catches and shot save % etc.

As well as that, we’ll also take a quick look at our set piece weakness and how both goalkeepers have offered very little in terms of aerial prowess to help deal with set piece crosses.

One major criticism this season, particularly aimed towards Nordfeldt has been his lack of basic goalkeeping skills with his hands, commanding his area and claiming crosses into the box.

Aerial duels involving goalkeepers are those when they are competing with an opposing player to win an aerial ball – just like in the main photo for this article.

Aerial duels, and winning them, are crucial because they tend to occur in dangerous goalscoring areas in and around the six-yard area.

An example of one can be seen below, one lost by Kristoffer Nordfeldt in the recent 3-1 home win against Middlesbrough. This didn’t cost us a goal, but another one of the four he’s lost this season resulted in a goal conceded in the 3-0 away defeat at West Brom.

#NordfeldtVsMulder – Aerial duels – An example of an aerial duel, this one lost by Nordfeldt vs #Middlesbrough . #Swans #GoalkeeperComparison Full comparisons/stats will be in an article soon. pic.twitter.com/TvpKLFoqYz

We were used to seeing and enjoying former goalkeeper Lucasz Fabianski command his area and catch high crosses that came his way so adjusting to watching both Nordfeldt and Mulder in action this season has been difficult for the supporters.

Mulder looked confident at the start when he first came in against Preston but during his second spell he began to show a vulnerability in the air.

Questions were asked about Mulder’s ability in the air against West Brom and Birmingham City at home. He saw a corner headed over his head and into the net and he flapped at a high ball against the Blues resulting in a goal.

Again, Mulder has made three times as many high claims compared to his number one rival while Nordfeldt prefers to punch crosses away, even the easiest of crosses like this one below at QPR:

Zoomed in and slow-mo. Was it a tactical thing to try and get Routledge away? Or am I being too kind on him? pic.twitter.com/cI6bJWQP0M

The numbers are reversed for punches, with Mulder making only three punches compared to Nordfeldt’s nine. Those stats would suggest that Mulder’s preference is to catch crosses, with Nordfeldt being the complete opposite. Again, it’s fair to say we’d prefer to see our goalkeepers coming out and catching crosses to ensure the danger is definitely cleared so it’s yet another round win for Erwin Mulder.

When it comes to saving shots, if the goalkeeper can’t keep hold of the ball, then ideally you want to see them parried away to safety. if that means palming a ball around the post for a corner then so be it, but you don’t want them parried into the path of an opposition player allowing for another shot on goal.

It’s worth pointing out here that Mulder has a greater number of overall parries here in comparison to Nordfeldt so the safety percentage works in Nordfeldt’s favour slightly – 63% to safety compared to Mulder’s 59%. Ideally you’d want a more similar data set size for both players for a fairer comparison.

Save % (Percentage of shots on target saved)

Some shots are simply unstoppable for goalkeepers, but these are a small percentage so it’s a fair enough stat to look and compare the percentage of shots on target that are saved.

In a comparison of 34 goalkeepers in the Championship who have played 1,000 or more minutes this season, only one goalkeeper fares worse than Kristoffer Nordfeldt (59.4%) – Millwall’s Ben Amos (50%).

Erwin Mulder fares much better in the save percentage stats with 72.6%, ranked 6th in the Championship (players who have played 1000 minutes or more).

Nordfeldt is due credit for his performance recently at home against Rotherham United. He made at least three excellent saves from close range to keep us in front when it looked like the visiting side were certain to score. But again, his aerial ability was questioned again and that shot save % is seriously poor.

His clean sheet at Ipswich Town was his 3rd in 11 games since returning to the starting eleven.

Defending set pieces has been our major weakness this season and has held us back on far too many occasions. We threw away points at Nottingham Forest, all five goals in two separate defeats against West Brom were conceded from corners or indirect free-kicks and have therefore cost us a number of points. We did another in-depth analysis on that (link below).

Excluding own goals, we have conceded 18 goals from in-direct set pieces this season (corners & free-kicks), 7 of which were conceded against Mulder, with the other 11 against Nordfeldt.

Averaging those figures per 90 minutes, we averaged a goal conceded from an indirect set piece every 3.53 games when Mulder has played, compared to 1.66 for Nordfeldt, that’s quite a significant difference between the two.

However, it has to be said, you can’t put that down to the goalkeeper alone. Teams defend corners collectively and a better method to determine the correct direction of blame would be to closely analyse each one to see how many were conceded as a direct result of poor goalkeeping.

Some corners have been a result of near-post goals and poor coverage in that area – leaving the goalkeeper helpless, while the goal conceded at Millwall was due to a lack of blocking the runners from outside the six-yard box.

Most likely a category that means a lot more for goalkeepers at Swansea City than many other clubs in the Championship. Like Guardiola, Graham Potter likes his goalkeeper to be confident with the ball at his feet and to act as another outfield player. Playing out from the back, Potter wants a goalkeeper who can make quick and accurate short passes to help suck in and attract an opposition press in order to get the ball into the space behind it.

Nordfeldt does well here and is one of only six Championship goalkeepers who has a goal assist to his name (his long pass for Dyer’s goal against Brentford). He has also made another 2 key passes this season while Mulder has yet to make any.

This one below in the 1-0 win at Ipswich is similar to the one he played to set up Dyer’s goal:

Considering some of our fans are very critical with Nordfeldt, you go watch the full game and he played well. Passing was good, made some good saves plus could have had another assist similar when we played against Brentford. pic.twitter.com/HQCO36DTJI

As an overall summary, the stats are heavily in favour of Erwin Mulder when it comes to key goalkeeping skills and the only one in Nordfeldt’s favour is his passing. Mulder will need to work a lot of his passing ability if he wants to re-claim the number one jersey, but many fans are looking at the 20-year-old German Steven Benda to see if he can offer a more all-round game in between the sticks.