Swansea City were unfortunate to leave Stoke City with nothing as Joe Allen’s blatantly offside goal was enough to split the two sides at the bet365 Stadium on Tuesday night.

Despite making 7 changes from the team that drew 0-0 against Nottingham Forest, Potter side’s looked the better of the two in the first half with some neat, passing attacking play that allowed them to work the ball in behind the Stoke City defence. A lack of presence up top with McBurnie left to rest on the bench hindered us early on and we later lost any control we had in the game by the time he was brought on with about 20 minutes remaining.

Looking at the stats, obviously the key one is that we scored one fewer and lost, but we did actually manage 5 shots on target compared to their 3, with another 9 shots either blocked or off target. The goalkeeper was tested later on as McBurnie’s fierce volley had to be tipped over but we just couldn’t find a breakthrough to earn a point – something that we deserved for our efforts. Stoke missed some clear chances in the first-half and we were fortunate it was still goalless at the break.

Looking at the passing stats, of those who started – Grimes (90%) and Carter-Vickers (94%) were in the 90’s for passing accuracy, with van der Hoorn not far behind with 88%. The 20 tackles we made were well spread out amongst the team, with George Byers making the most with 4 followed by Routledge with 3.

Spurs loanee Cameron Carter-Vickers made his full debut and looked a promising and solid defensive option. He showed his strength well throughout and while he didn’t have Joe Rodon’s pace, he slotted in seamlessly alongside captain Mike van der Hoorn. 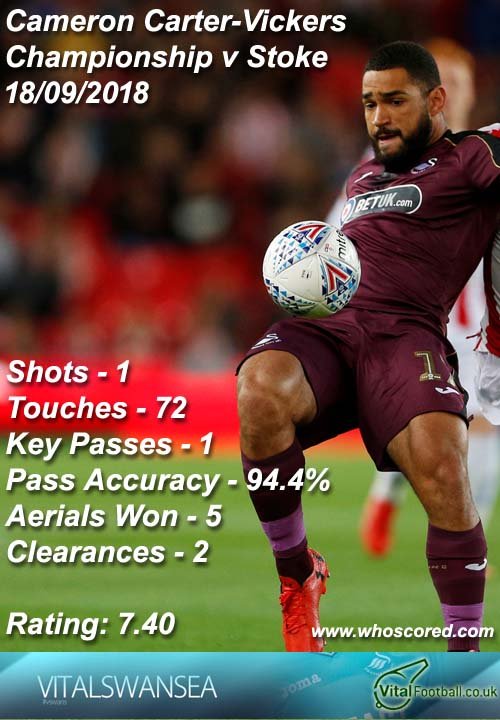