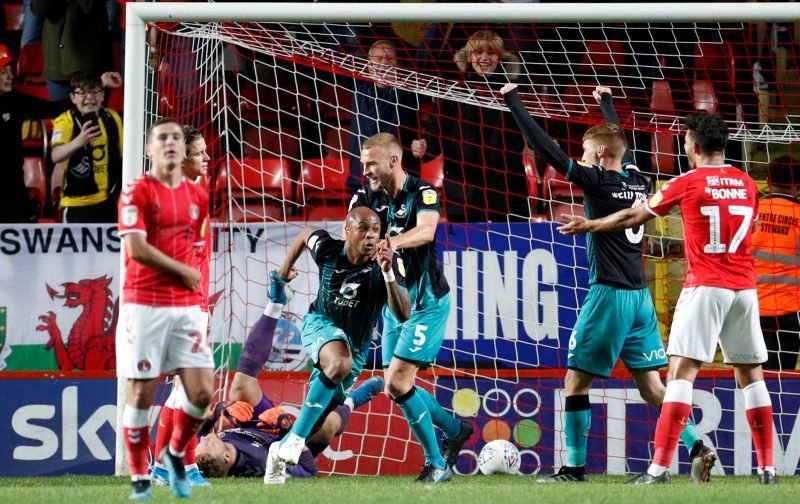 Charlton Athletic fans were full of praise after watching their side lose 2-1 at the Valley on Wednesday night as Andre Ayew netted the winner from Matt Grimes’ corner following Yan Dhanda’s equaliser which cancelled out an early strike from Leko after a defensive error.

Whilst some Charlton fans felt they did enough to earn a point from the game, the majority on their forum felt that the Swans were worthy of the three points as well as top spot in the Championship table. And there was also one Swansea player in particular that a number of their supporters were impressed with on the night.

Here are some chosen comments from Charlton fans via the Charlton Life forum:

“Looked a bit toothless up front,  but we were playing a very good side. Really impressed with Swansea’s workrate, they pressed us superbly.”

“Very impressed with Swansea. Will be near the top of the table without doubt.”

“We were very bright in the first half but ran out of steam and ideas in the second. Against a lesser team that might have been enough but Swansea were just that bit better than us and ultimately we can’t complain too much about the result. In Roddon and Celina they have two players of good Premier league quality.”

“Best CB pairing in the league that we’ve faced. Swansea will be up there and there’s no shame in that defeat.”

“Powder puff up front…Celina for them was shear class.  We rallied at the end but dont forget they have a stack of premiership money so should beat us….onwards and upwards still proud of what we have achieved so far.”

“Swansea may not be as exciting as Leeds but Swansea are a better team.”

“Deserved win for the best team we’ve played this season. Pressed us everywhere out of possession and moved the ball well in possession.”

“2nd best tonight, Swansea looked very slick and their No10 Celina? was the best player on the pitch by miles.”

“Watched on TV. As others have said, we worked hard but could not quite the the final ball right. Could have pinched a draw in the scramble at the end, but fair play to Swansea, they looked outstanding for this league.”

“Swansea are a class above and are the best team I’ve seen this season on a par with Brentford but with more up front.”

“Celina is a fantastic footballer and his pace is electric.”

“Swansea – good organised side who pinged the ball about well and kept possession well – will be up there at end of season – their left winger (Celina ?) looks like he will be some player in the future.”

Plenty of encouraging comments there from Charlton fans especially to see those impressed and the opinion that we looked a better side than Leeds! We produced a rather poor performance against Reading, failing to take all three points after taking the lead but we were back to our best at Charlton and we probably should have won the game by a bigger margin.

On Saturday, Swansea host strugglers Stoke City who have given their under-pressure boss Nathan Jones their backing following speculation that he was going to be sacked before the game.