Analysis – Where it went wrong for Swansea City at Hull 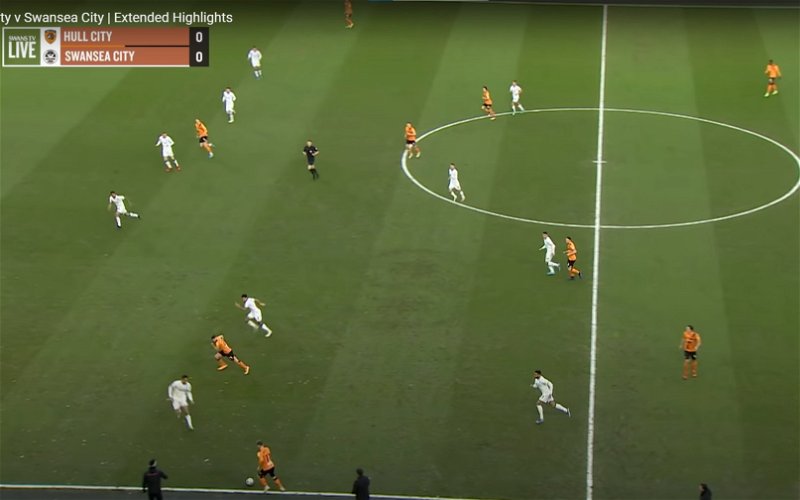 For the eleventh time of the season, Swansea City conceded the first goal of a Championship league match on Saturday as Hull City continued their winning run.

The damage was done within the first 17 minutes as the unmarked Lewis-Potter doubled the host’s advantage after Tom Eaves’ fifth-minute opener.

Swansea’s defensive shape was worryingly awful in a disastrious opening 20 minutes. Our high wing-backs have been an ever-growing target area for opposition teams as Russell Martin loves to keep them in high attacking positions.

This, however, can affect the defensive shape. The screenshot below shows the start of the move that leads to Hull City’s opening goal. Right wing-back Cyrus Christie is only just inside his own half after applying some pressure on the ball. As Hull progress into Swansea’s half, this forces right-sided centre-back Ben Cabango to come across and cover the danger.

You can also see just how narrow our back four is as Fulton drops back into the defensive line.

With a huge area of open space waiting to be exposed in behind the right side of Swansea’s defence, Kyle Naughton, the middle of the three centre-backs, also has to come across to cover. Korey Smith also chases back but loses the foot race. Ben Cabango, playing in the middle of a back three at this point, is actually the furthest wide of any defender and he, as the only centre-back in the starting line-up, should be the man marking Tom Eaves in the centre. 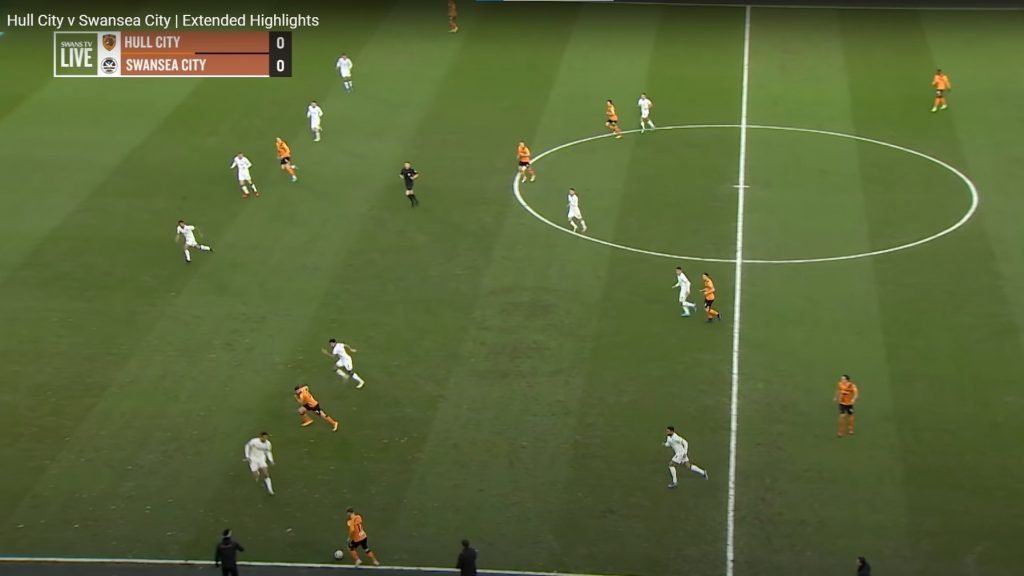 It’s far too easy for Hull to get in behind down our right side and also far too easy for them to get a cross in (below). And also, far too easy for their main striker to make a run into the box that starts from the edge of the final third and ends with him poking the ball into the net at the far post from close range. It’s just all far too easy. Jay Fulton is the player trying to mark the goalscorer Eaves and follow his run but that has to be the job of a centre-back. 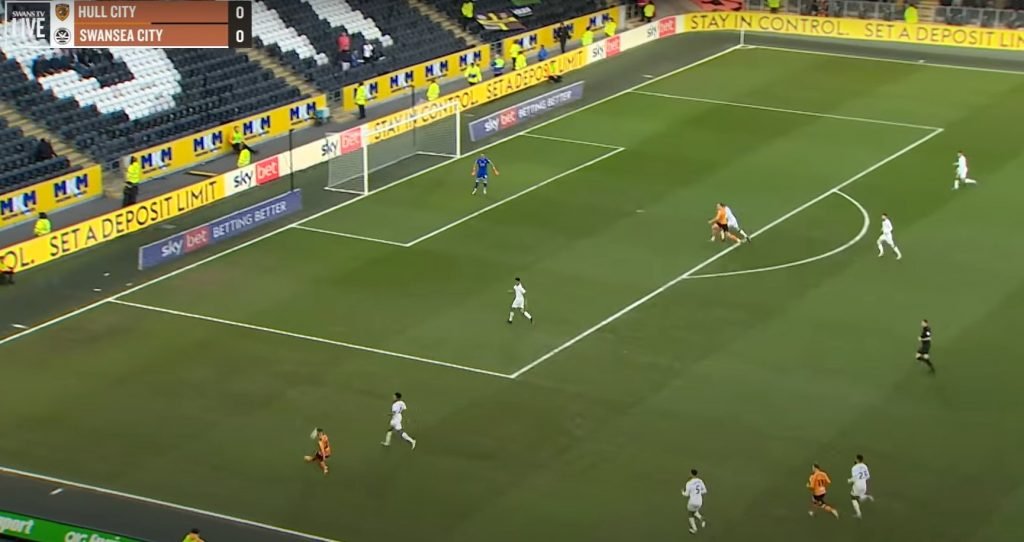 12 minutes later and it’s 2-0. This time it’s a move that starts off from our own loss of possession inside Hull’s half. Latibeaudiere attempted a dribble inside but lost possession and suddenly the Swans are up against it.

They can easily drive forward and evade both Manning and Wolf as four Swansea players are all very close together and ball-watching. 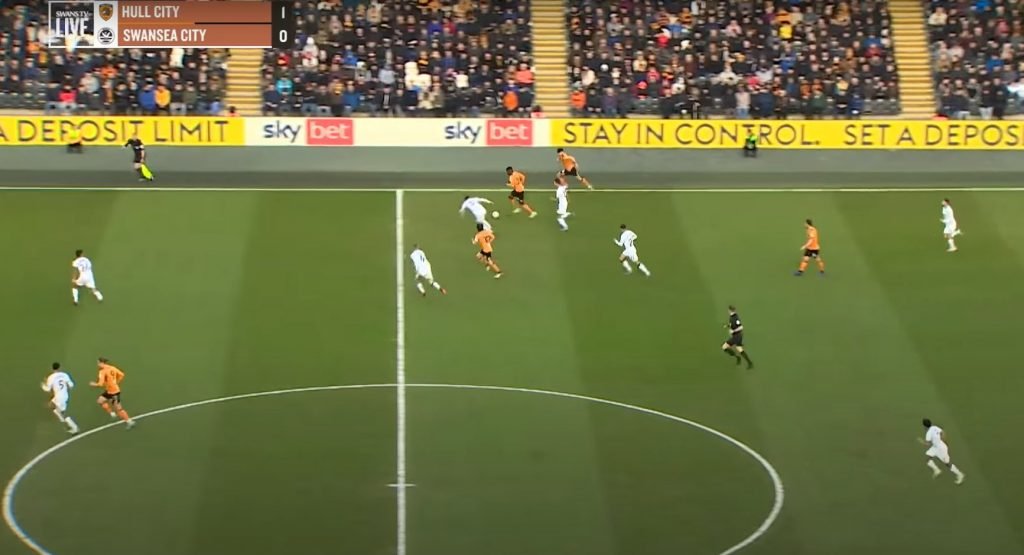 Teams are at their most vulnerable on the counter when all of their outfield players are running back and trying to get back into a defensive shape. It just doesn’t happen for the Swans as space opens up through the channel (below). 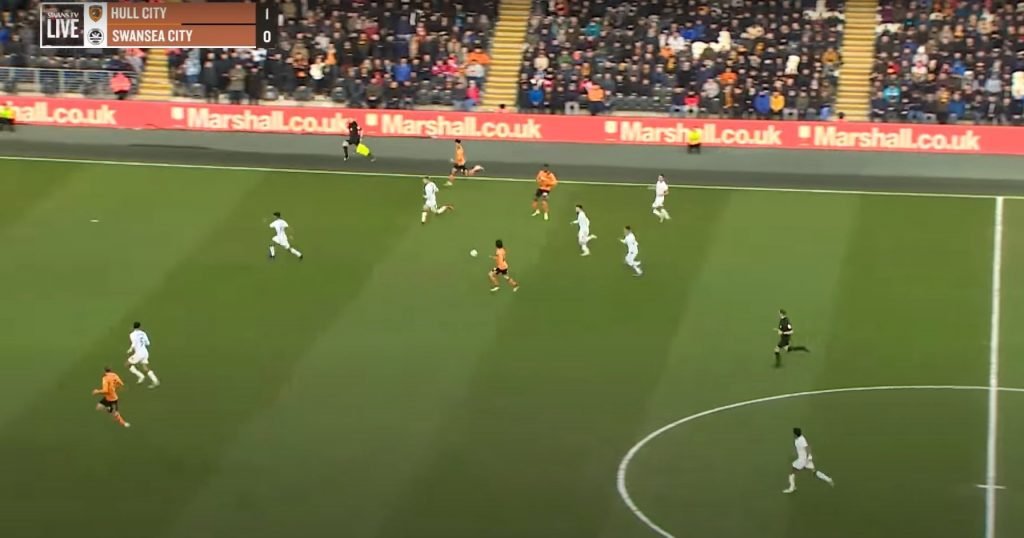 A cross is then sent over to the far post where Lewis-Potter is waiting unmarked to finish past Hamer. 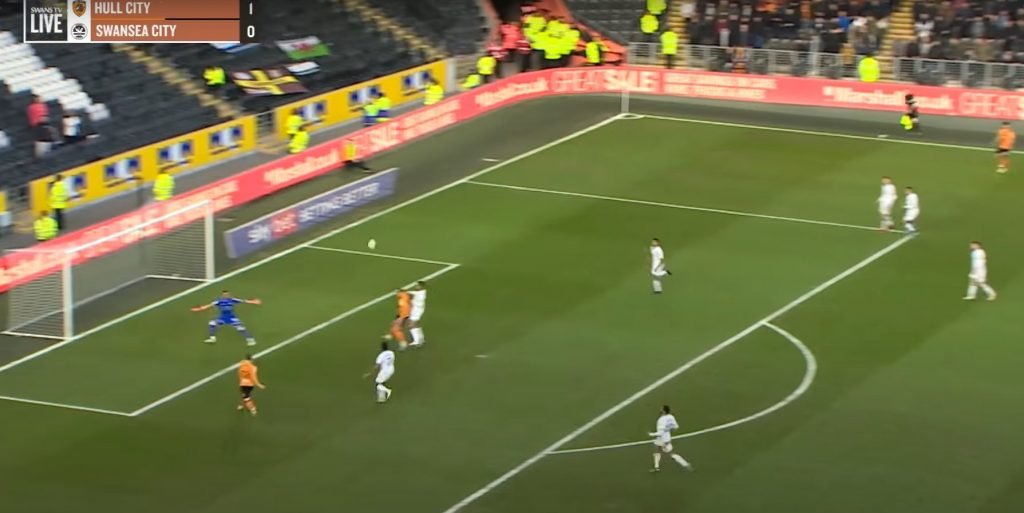 Hull City sat deeper in the second half (below) on their two-goal lead which allowed Swansea to dominate and create more chances but they couldn’t find the back of the net. Substitute Obafemi had an excellent early chance at the far post that would have helped a comeback. Piroe missed the best chance of all from Walsh’s free-kick that came back off the post but the Swans have to stop getting into these situations. 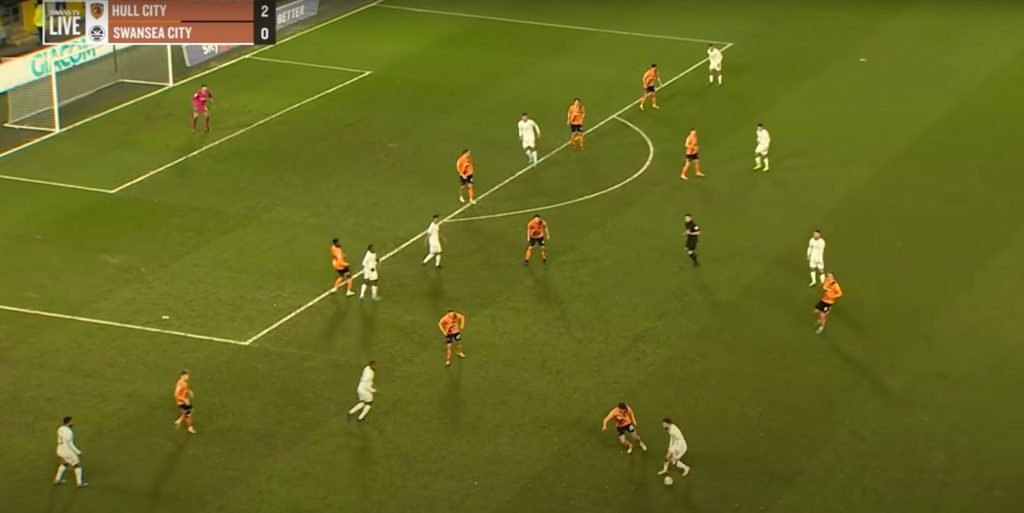 These goals are nothing that we haven’t seen before this season. The second goal reminded me of the goal that Nottingham Forest scored against us at home when they played through us from their own defensive third.

Huddersfield picked out space on our right side recently to score their early opener. It’s a bad habit that we really need to address quickly as the opposition are clearly targeting it an as easy and obvious area to exploit.