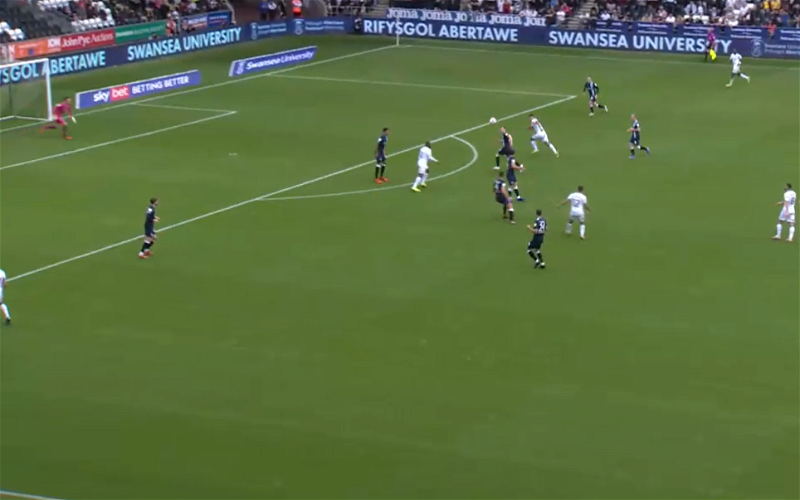 Jamie Paterson and Joel Piroe have struck up quite a partnership this season, combining together to form an exciting attacking force but the Dutch striker’s goal contributions have dried up since Paterson’s recent absence.

Of course, a striker relies heavily on creative players around them to score goals and it’s obvious that the frontman will suffer if he has less of them around him providing the service.

“Of the 15 shot assists played to Joel Piroe this season, 8 of them have come from Ethan Laird (4) and Jamie Paterson (4). “

But Paterson isn’t the only creative player available to supply Piroe with goalscoring chances. Ntcham, too, has also proved to be a key creative player but Piroe is clearly missing his link-up play with Paterson, who appears to be in some contract dispute with the club and refusing to play. However, he’s received backing from Russell Martin, who hopes the issue can be resolved and he remains a Swansea player following the January transfer window.

The sample size is very small, Paterson has missed only three games, all of which have seen Piroe fail to score. I wouldn’t put all that down to that one reason but the match at QPR highlighted the issues and the difficulty he will have if he doesn’t have two quality attacking players in those two number ten roles behind him. 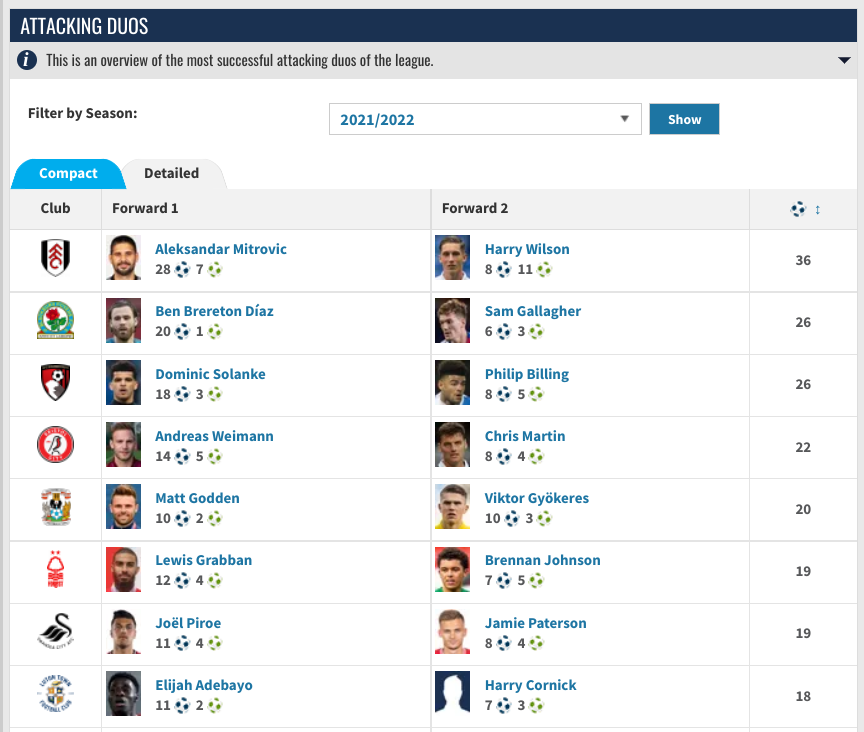 The system that Martin adopts sees two attacking players playing behind Joel Piroe. Often these two players will move out into the wide areas to help support the wing-backs and build attacks in wide areas. This can lead to Piroe being very isolated up top. With both Ntcham and Paterson missing at QPR, we saw the Dutchman having to drop back near the halfway line to get involved in the action.

Korey Smith arguably put in his best performance in that unfamiliar attacking role at QPR, but again, he was usually in wide areas linking up with new right wing-back loaned Cyrus Christie. On the other side, Hannes Wolf is still getting up to speed after little game time of late and hopefully we will see him making those inside runs to support Piroe.

You can also see the problem shown in the pass map below in the 1-0 home win vs Preston, courtesy of SwansAnalytics on Twitter.

Both Korey Smith and Olivier Ntcham operate in wide areas to support the wide attacks with very little action through the central areas.

What’s missing is someone making those inside runs that Paterson would make off the left flank.

Compare the pass map above with the one below, showing our shape in the 1-1 draw against Blackpool that saw both Ntcham and Paterson starting.

We can see how Paterson averaged a more central position while Piroe operated more through the right channel linking up with Ntcham.

Below is an example of this as Paterson moves into a central area to play an excellent pass in behind for Piroe to run on to and score. 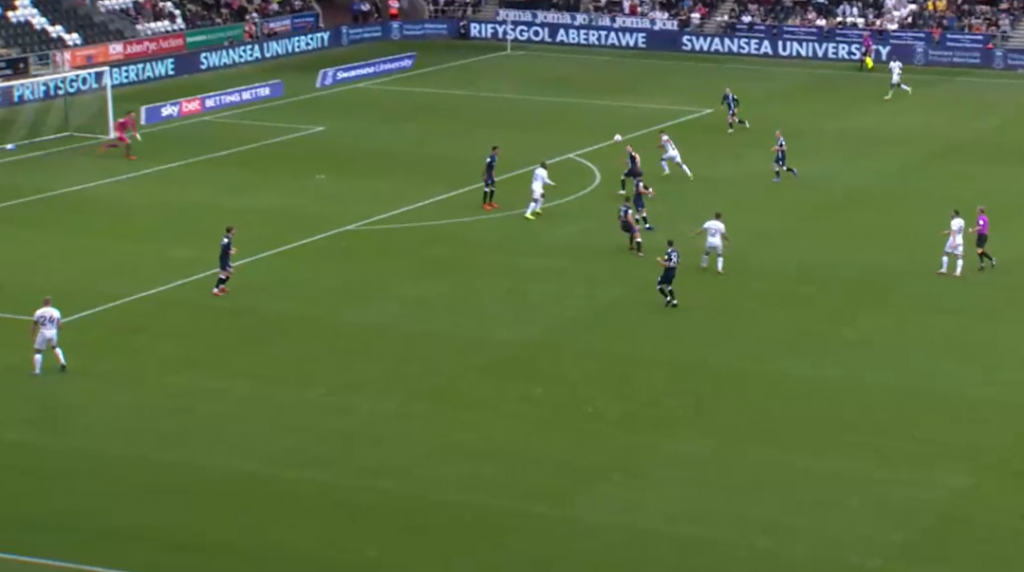 Ntcham was also making those inside runs and helping to work the ball through the middle but they don’t seem to be happening as often now as the heatmaps comparison below demonstrate. 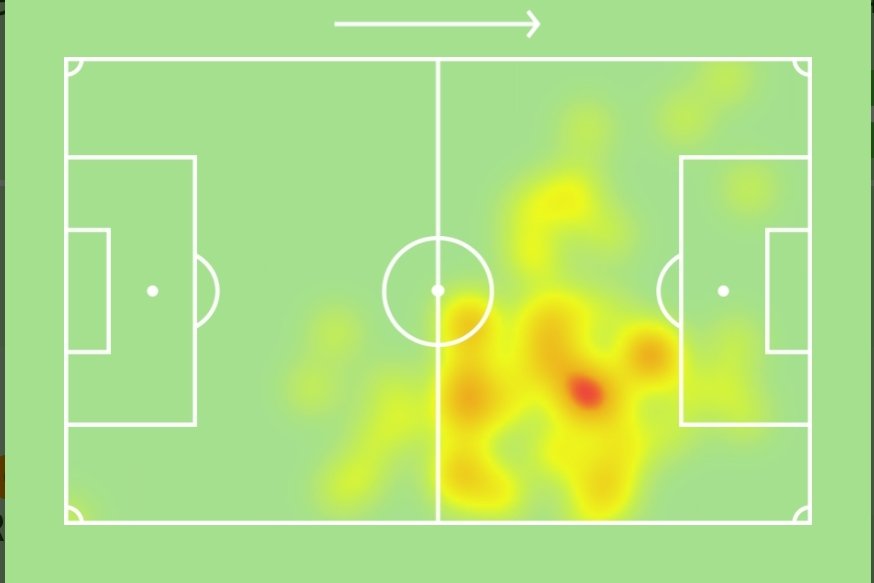 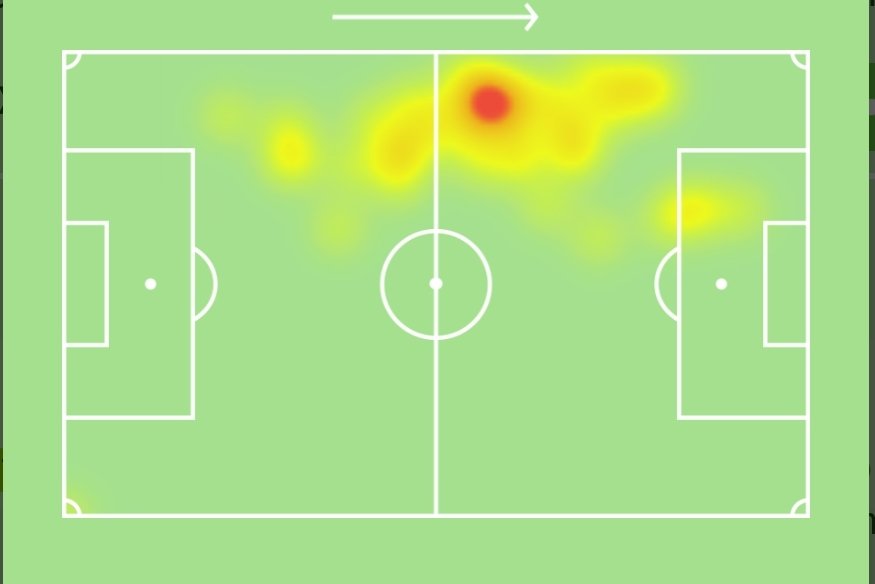 Whilst I did mention earlier how strikers rely on creative players around them to get chances and score goals, Piroe has also shown plenty of ability to create chances and goals all by himself. We saw this at QPR, making a solo run, cutting inside from a wide right area before getting a shot on goal from just outside the box. At Luton, he also showed great ability to drop deeper in order to find open space to get shots on goal. It’s just a case then of having the players picking him out with accurate passes.

Watching his shots reel, Piroe mostly looks for 3 or 4 different types of opportunities. Dropping deep and finding pockets of space in and around the edge of the box (example above), making runs in behind the opposition defence from passes from deeper areas in midfield (see Paterson’s pass below) and looking for shots inside the box from low crosses (often provided by now-departed loanee Ethan Laird or another wing-back). 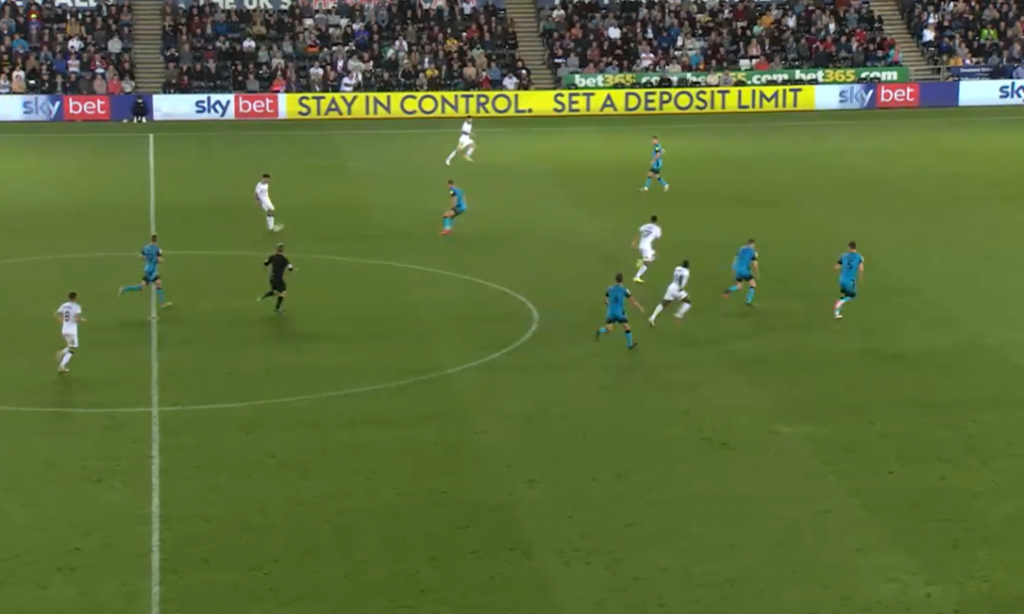 Paterson ball over the top for Piroe

Of the 15 shot assists played to Joel Piroe this season, 8 of them have come from Ethan Laird (4) and Jamie Paterson (4). One player departed and another is not available. Olivier Ntcham has made 3, with the other four played by Obafemi, Grimes, Manning and Naughton respectively.

If we look at all passes, some fans might be surprised to know that Matt Grimes has played the most successful passes to Piroe (58), followed by Ntcham (53). Paterson’s pass count to Piroe is far lower at 26 but most importantly these are passes into better goalscoring areas.

Piroe has already proved to be a superb clinical finisher at this level and capable of scoring different types of goals and we really need to try to find ways of supplying him with those opportunities again. I feel we don’t make him the focal point of our attacks with such a lot of the play going down the flanks and we need to try and get the ball to him in central areas.

Hannes Wolf will still take some time to get up to speed in the Championship. Hopefully, he can provide that creativity as well as Ntcham again when he returns on Saturday.