Analysis: How Potter’s Fresh Attacking Approach Got The Win At Sheffield United 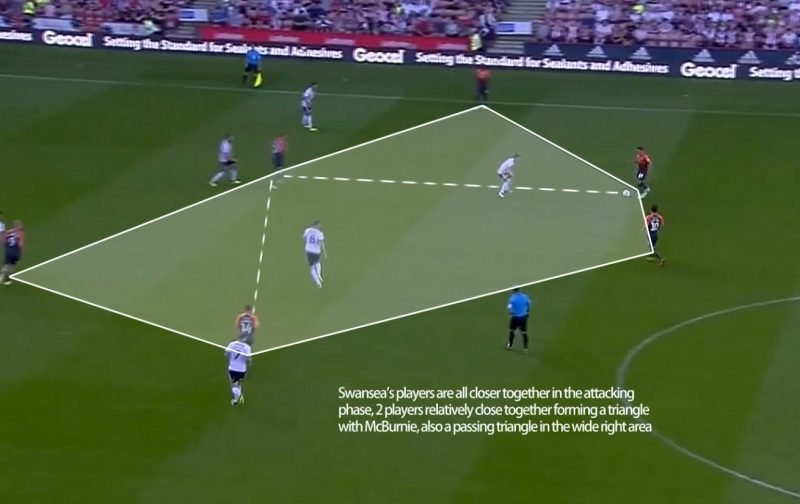 Part two of our in-depth match analysis of our opening day win at Sheffield United as we mainly focus on Swansea City’s attacking performance in the second half as they came back from a goal behind to get a 2-1 win and three points.

After a cagey first half where both sides were rather cautious in their approach and forced to attack in wide areas, the two teams quickly upped the pace from the restart and we saw a much more open and entertaining half of football.

Prior to Sheffield United’s 63rd-minute opener, the Swans had a decent spell of possession and looked the better of the two sides but they just couldn’t make use of the time and space they were given in the opposition’s half.

Like we said in part one of the analysis, Swansea’s solid midfield shape and positioning made it difficult for the home side to break through the middle, and with play forced into wide areas, they continually sent crosses into the box that van der Hoorn and Fernandez were dealing with well.

It clearly wasn’t working so they tried to be more creative and patient with their build-up play in the final third. Below is a typical example. Rather moving the ball out wide to the left touchline which was what they were usually doing before the break, they now look to play the ball inside and try to feed a player in-behind, similar to what the Swans were attempting. 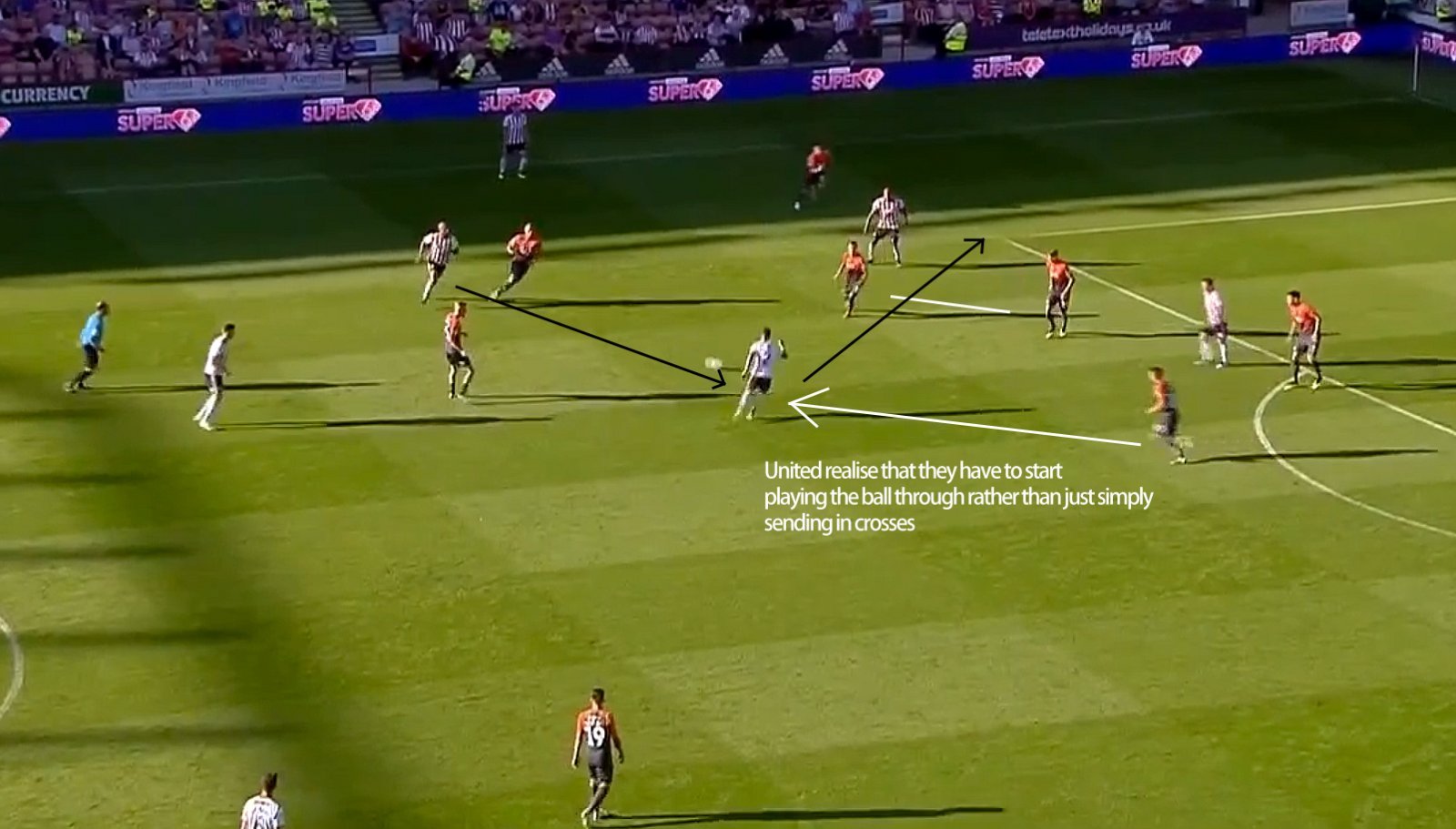 Nothing comes of this move (above), but they were rewarded for this switch-up when they created their first real decent chance in front of goal.

United’s goal was a disappointing one for the Swans having been so solid up until this point. Again, rather than putting in a hopeful cross into the box, the hosts try and be more creative. To begin with, the Swans match them man for man in the penalty area corner area, but this shape is soon lost when the goalscorer makes a run around the side and into the penalty area – as shown by the white curved line.

Below, United are able to work the ball near the byline, and this time a cross is pulled back to Baldock, and with a big area of space that the Swans midfield doesn’t cover and a slow-to-react Carroll to pick up his man, Baldock steers the ball low into the corner. 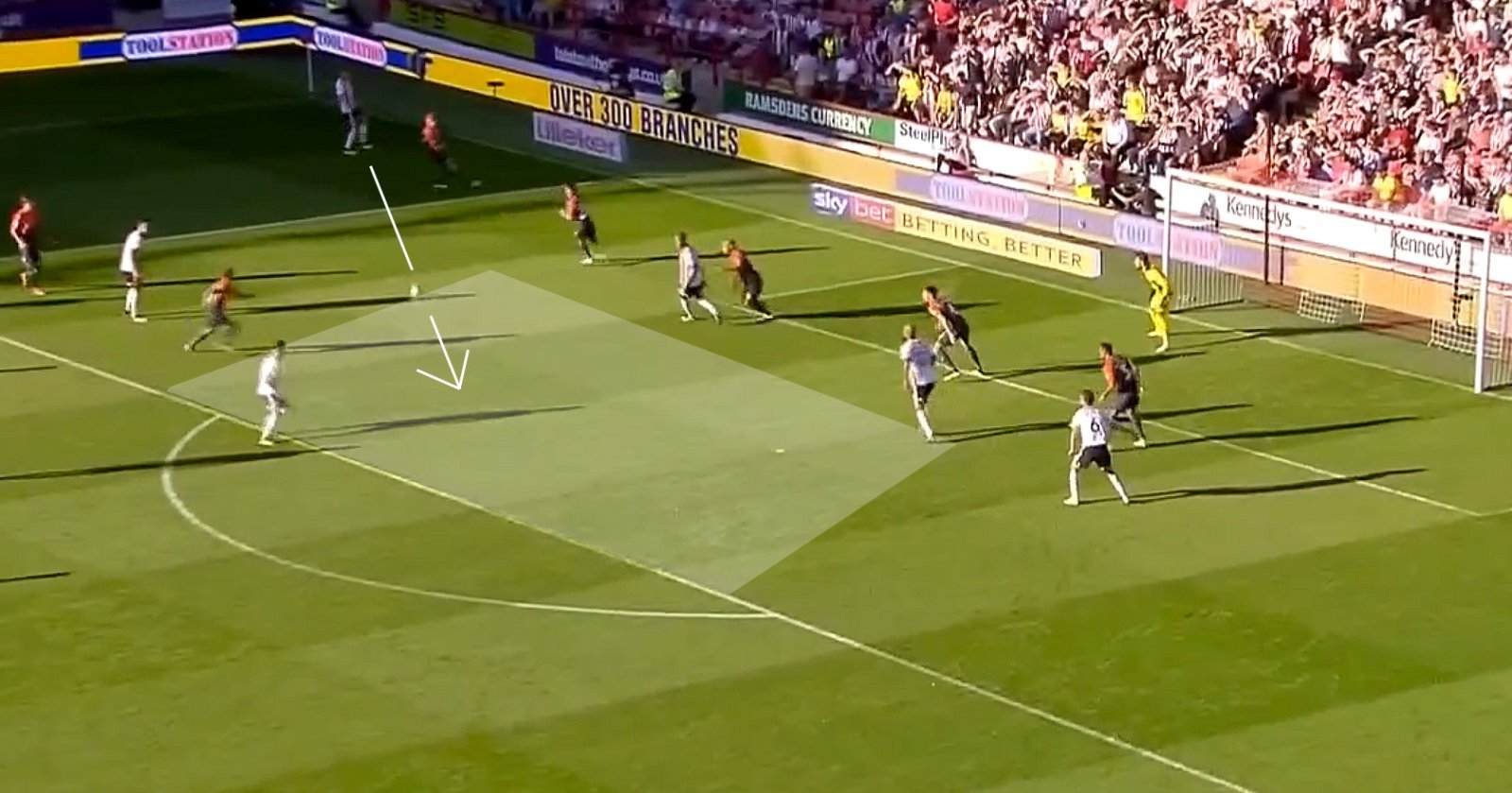 United allow the Swans far too much time and space 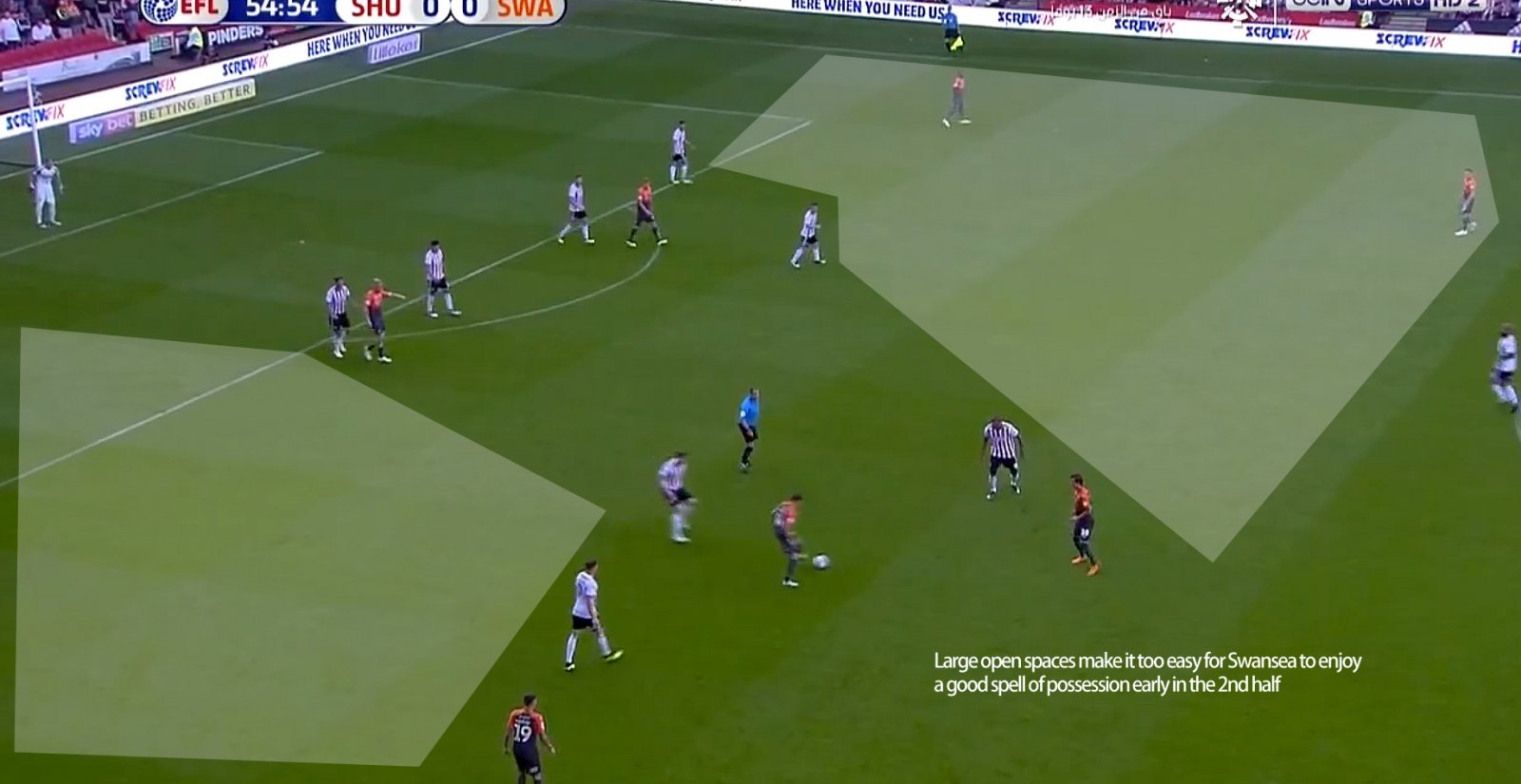 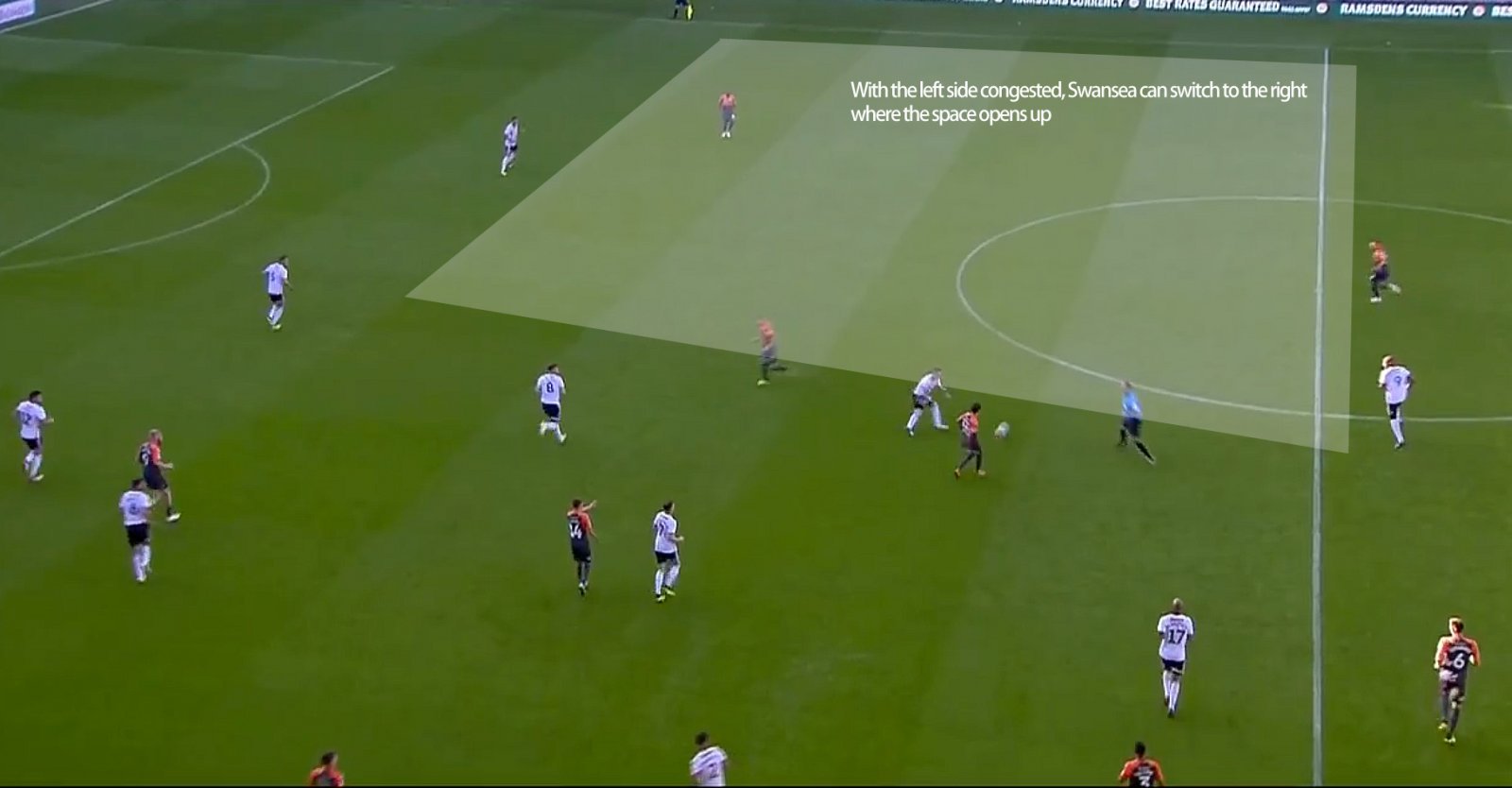 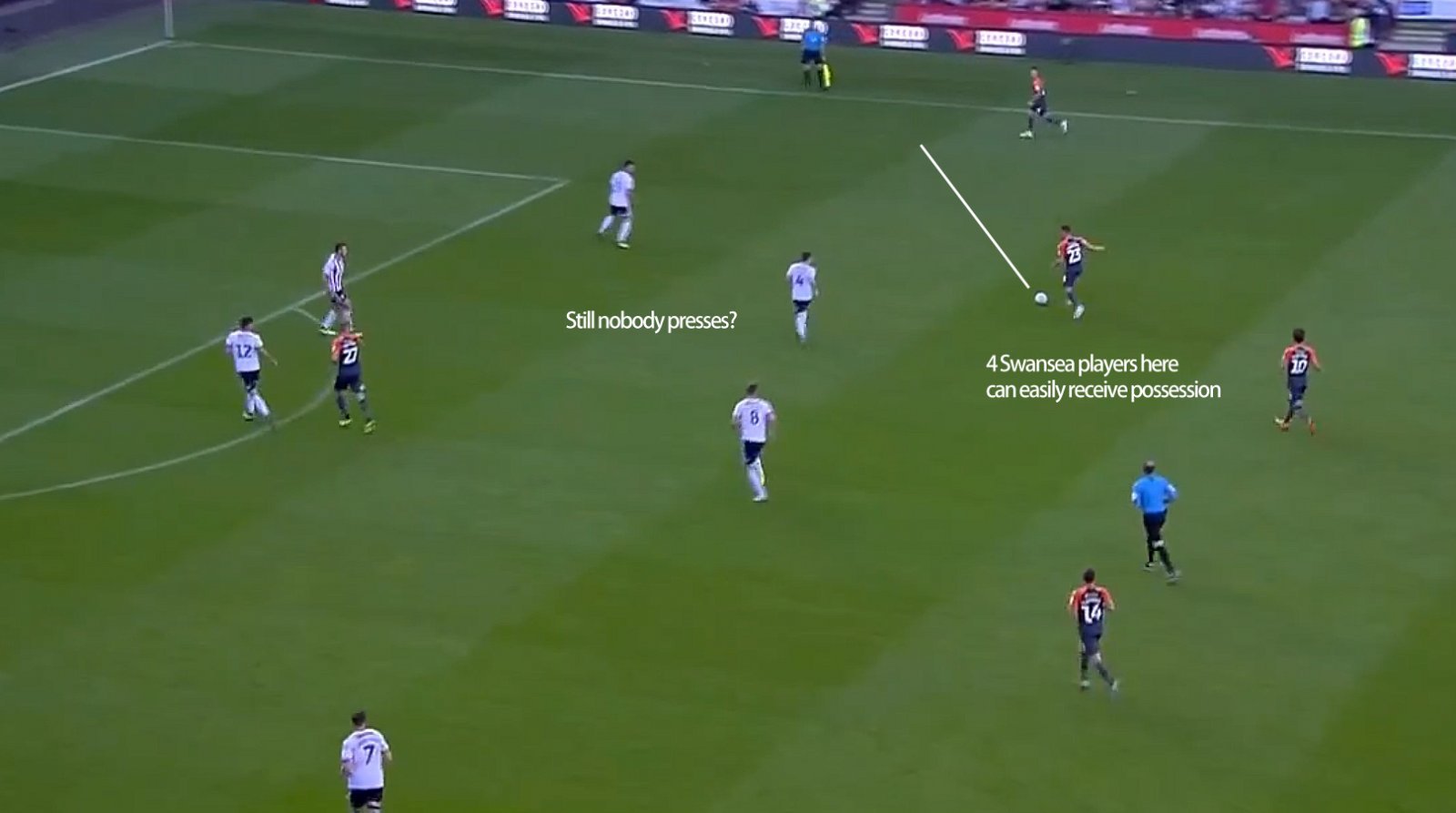 Building from the back was simple at times

This wasn’t always the case, but too often it was far too easy for the Swans to build from the back.

Below, Celina – who has now dropped deep in that holding role, can easily pick up possession and turn to face goal. Fernandez can also easily pass to him under no pressure and United’s McGoldrick is there pressing by himself.  Neither number 7 or 8 in the picture look to press once they see Celina receiving the ball in acres of space. 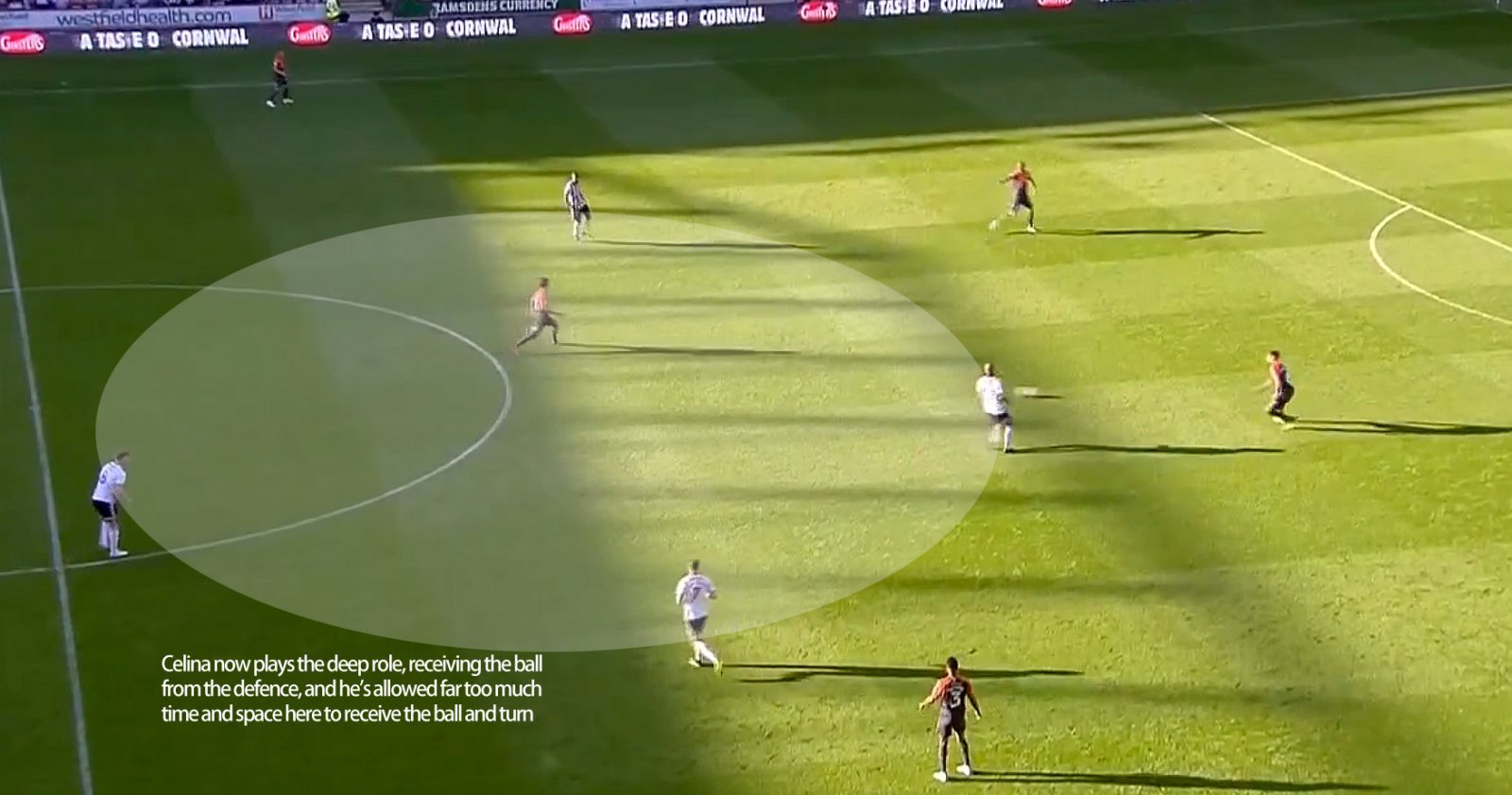 In the below example, you’d assume that Nordfeldt had to kick long here because Sheffield United have pushed two players up to force the long play. However, Nordfeldt is patient and waits for an opportunity which does arrive and he can make a short pass. 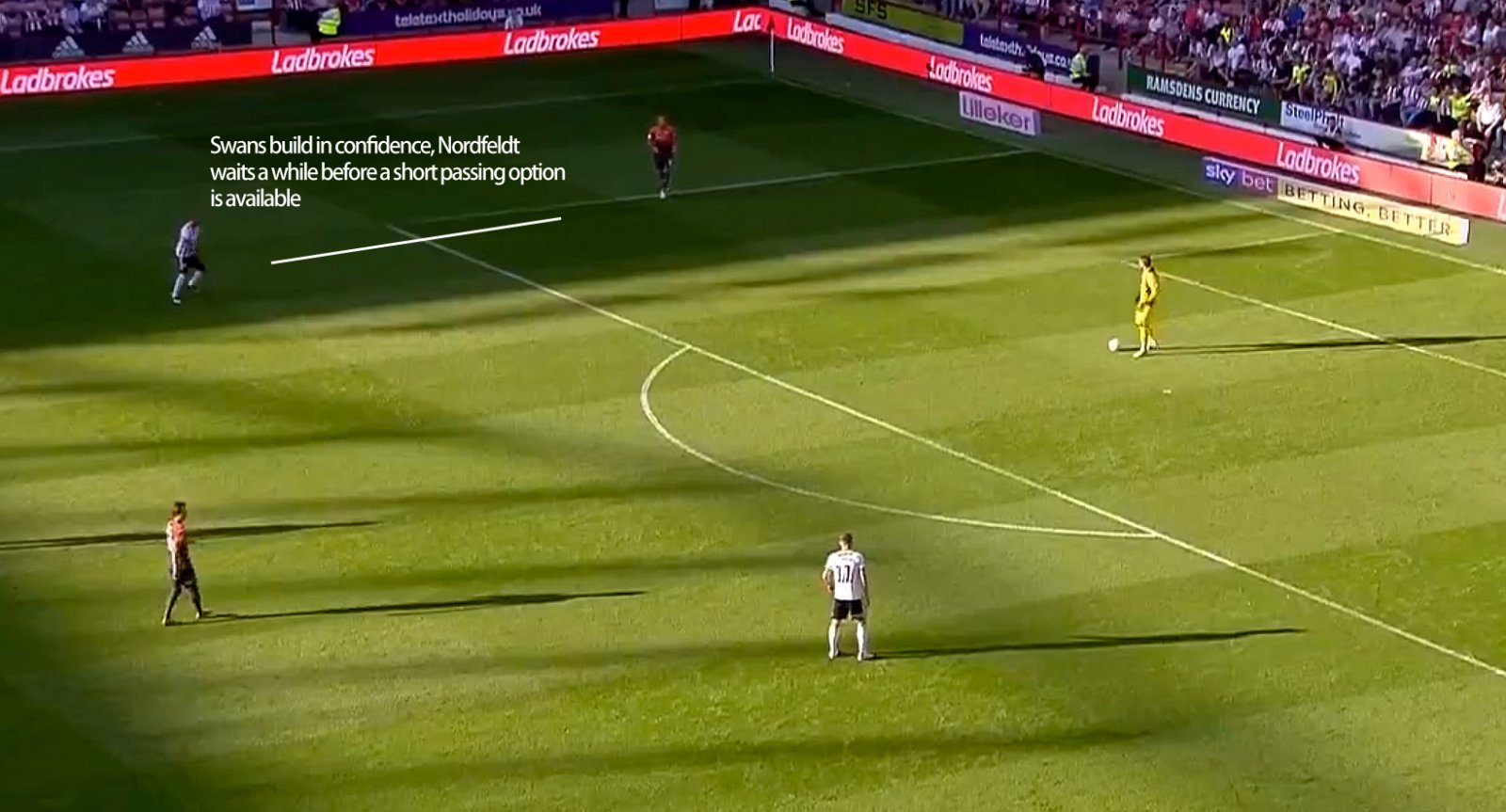 Our equalising goal saw us build quite easily from the back and this is something we’ve not seen in a while. That patience and confidence to do this when we’ve seen so often our defensive players panic and kicking long, aimless balls that usually saw us lose possession.

Below, Fernandez starts the move after receiving a throw- in on the left side. Under little pressure, he can pass back to the goalkeeper who then has the choice of two players to pass to in front of him. Celina too is also unmarked. Again, it shows the home side’s awful shape out of possession and their total lack of a pressing plan to nullify our main threats. 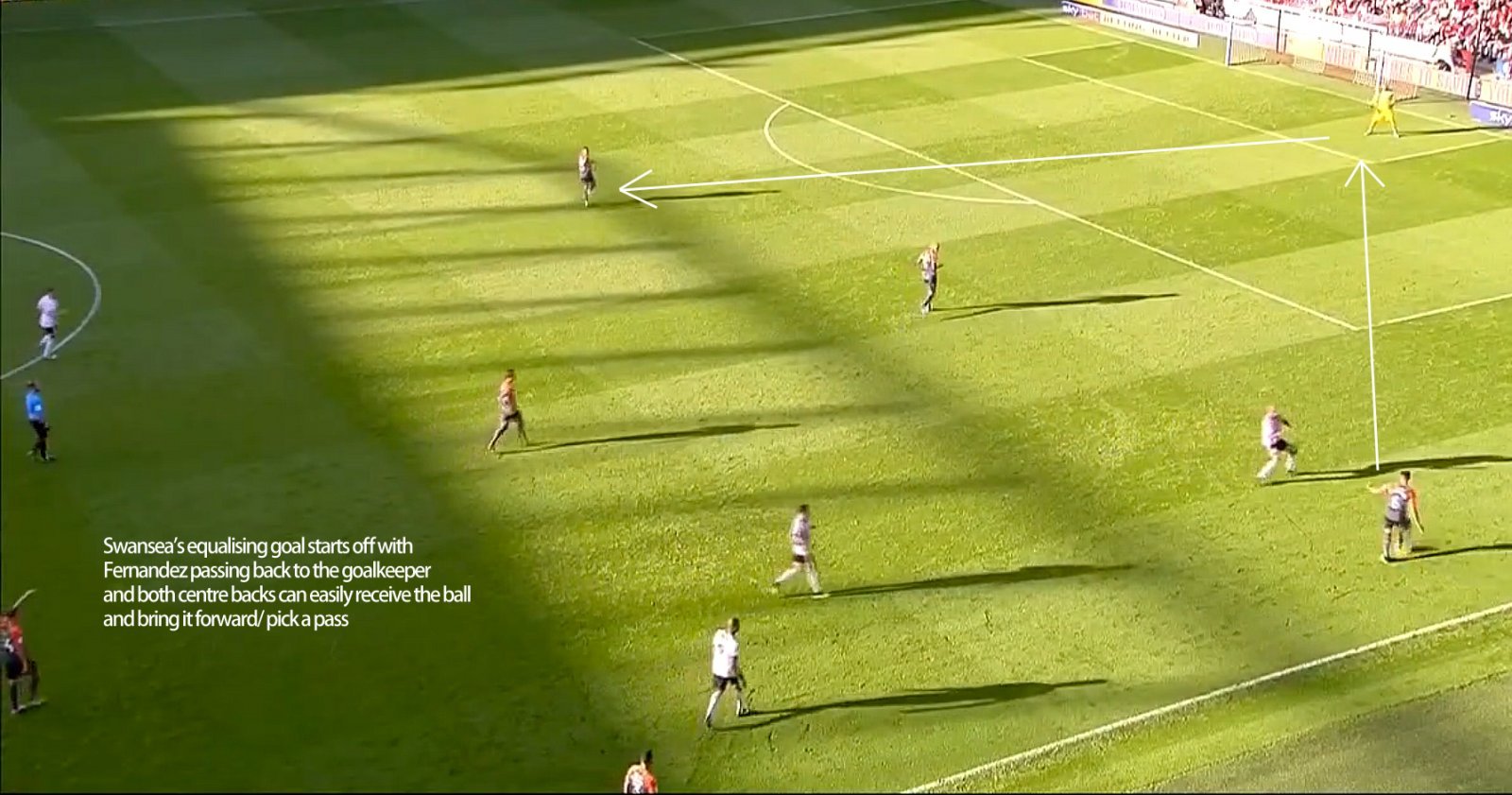 The ball is then played out to the right and Fulton plays a nicely weighted pass for Roberts to run on to and here again we see the amount of space down the flank. 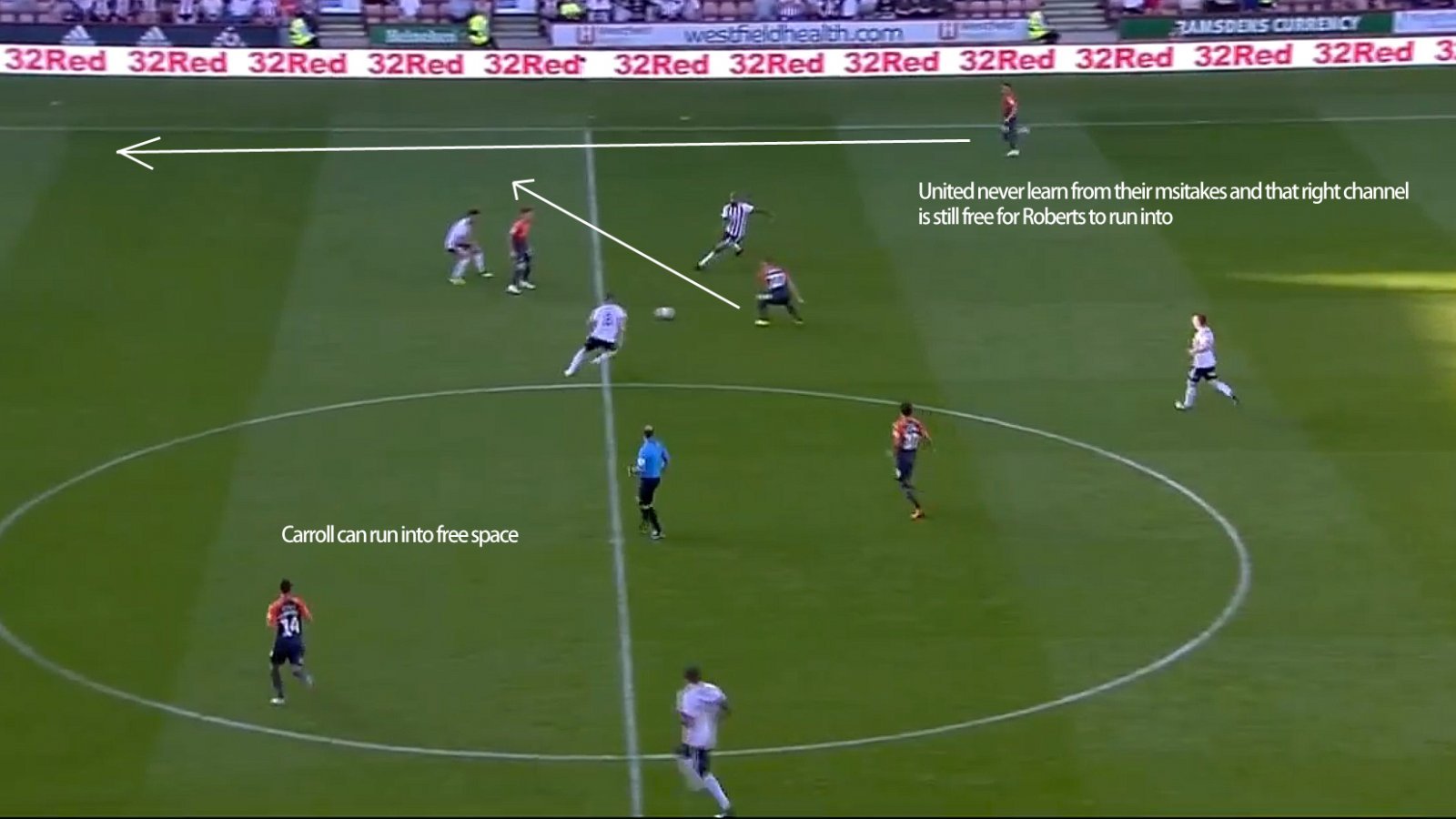 The Swans work the ball into the penalty area well, McKay’s attempt at a shot on goal is denied by a defender but his touch on the ball forces the goalkeeper to make a parried save and McBurnie sweeps it up at the far post – again unmarked as he runs in behind.

Our winning goal was a bit more direct compared to the build-up play for the first as Fernandez – involved again – played a long ball forward towards Carroll that he attempted to flick on. I’m not sure anyone got a touch but the ball dropped nicely for substitute Montero to run on to – again in space down the flank – this time the left.

The wide angle shot below shows a better view of the build-up to the goal. The curved white line shows Fernandez’s direct pass and how Jefferson Montero was able to get in behind Sheffield United’s back line.

Yet again, Sheffield United’s shape comes into question here. The Swans suck United high up the pitch with their build-up play at the back. This is something we mentioned in part 1 about Swansea’s balanced pressing game, and not getting sucked in and losing out with direct passes over the top. This is what happens here though.

Last season, you wouldn’t have seen a winger stuck to his touchline on the halfway line in this situation. He’d be forced to play deeper and add closer defensive cover for the fullback. Carroll’s position here (just under the white passing line) is crucial to the goal because United’s fullback has to move inside to mark him although the right-sided centre-back could easily do this here, which would allow the fullback to get touch-tight on to Montero.

Championship teams will quickly need to realise that you can’t allow something like to happen – let’s hope they don’t! In the Premier League, clubs quickly realised this and double-marked him which meant Montero struggled to impress.

Triangles and players playing closer together

One of my (many) frustrations last season was the distance between players. Passing and possession teams have their players playing close together because otherwise how can you expect them to keep possession and be patient with their build-up? 30-40 yards between players just isn’t going to do that.

It was totally different on Saturday at Bramall Lane though. Below is a good example and the dotted lines also show passing triangles – one wide right and another up top involving McBurnie. Last season players were having to try and thread long passes through a crowd of players, but here, Roberts can easily pass to Asoro on the right touchline or Celina just alongside. 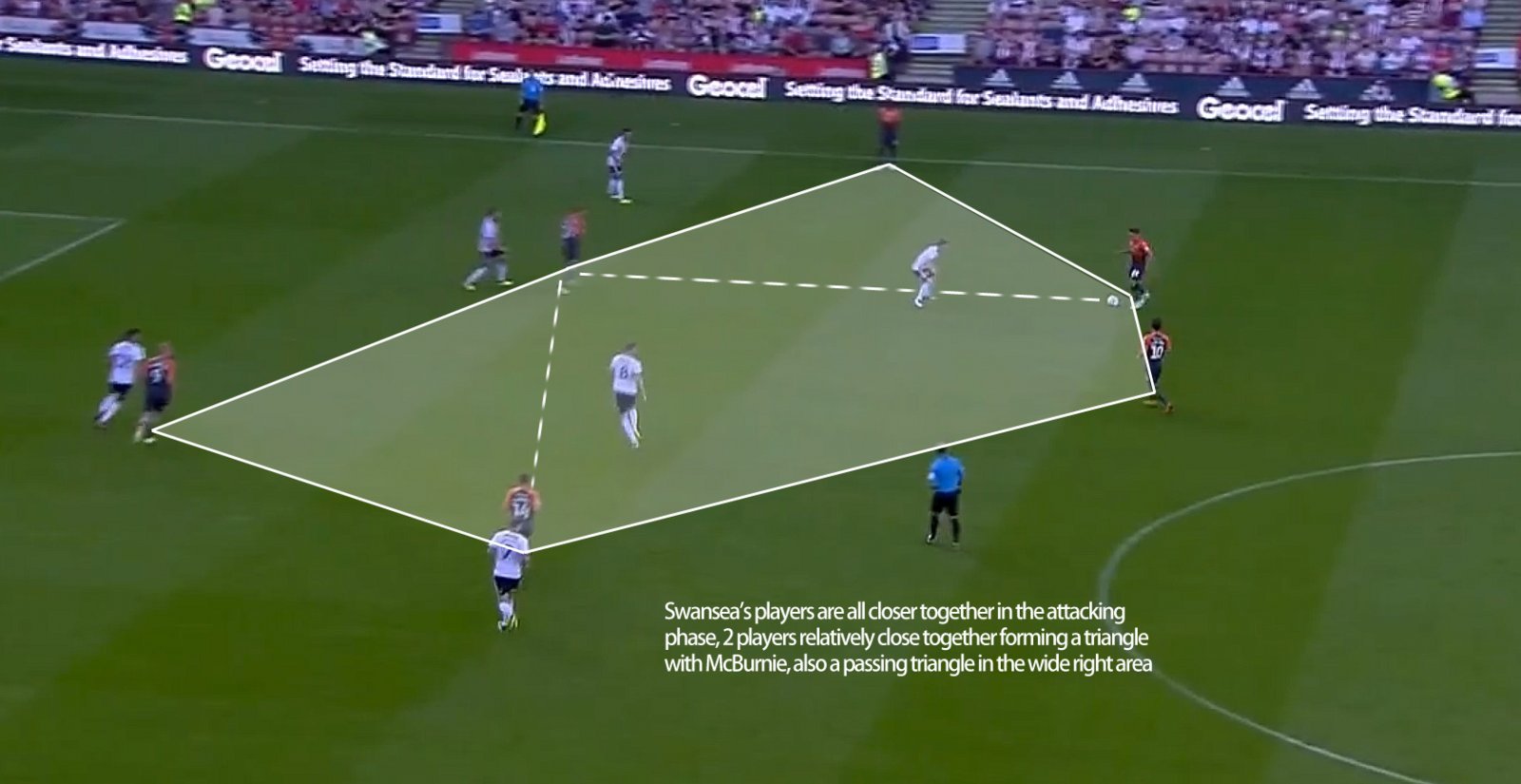 There were moments when we saw something of a ge-gen press – something that Jurgen Klopp likes at Liverpool where a number of players quickly press the ball straight after losing possession in an attempt to regain it – as opposed to dropping back in a defensive shape.

This is useful if you do win possession because it’s usually in your opponent’s half and the players involved in the press – usually three of four can then all push forward in an attack after winning the ball back. 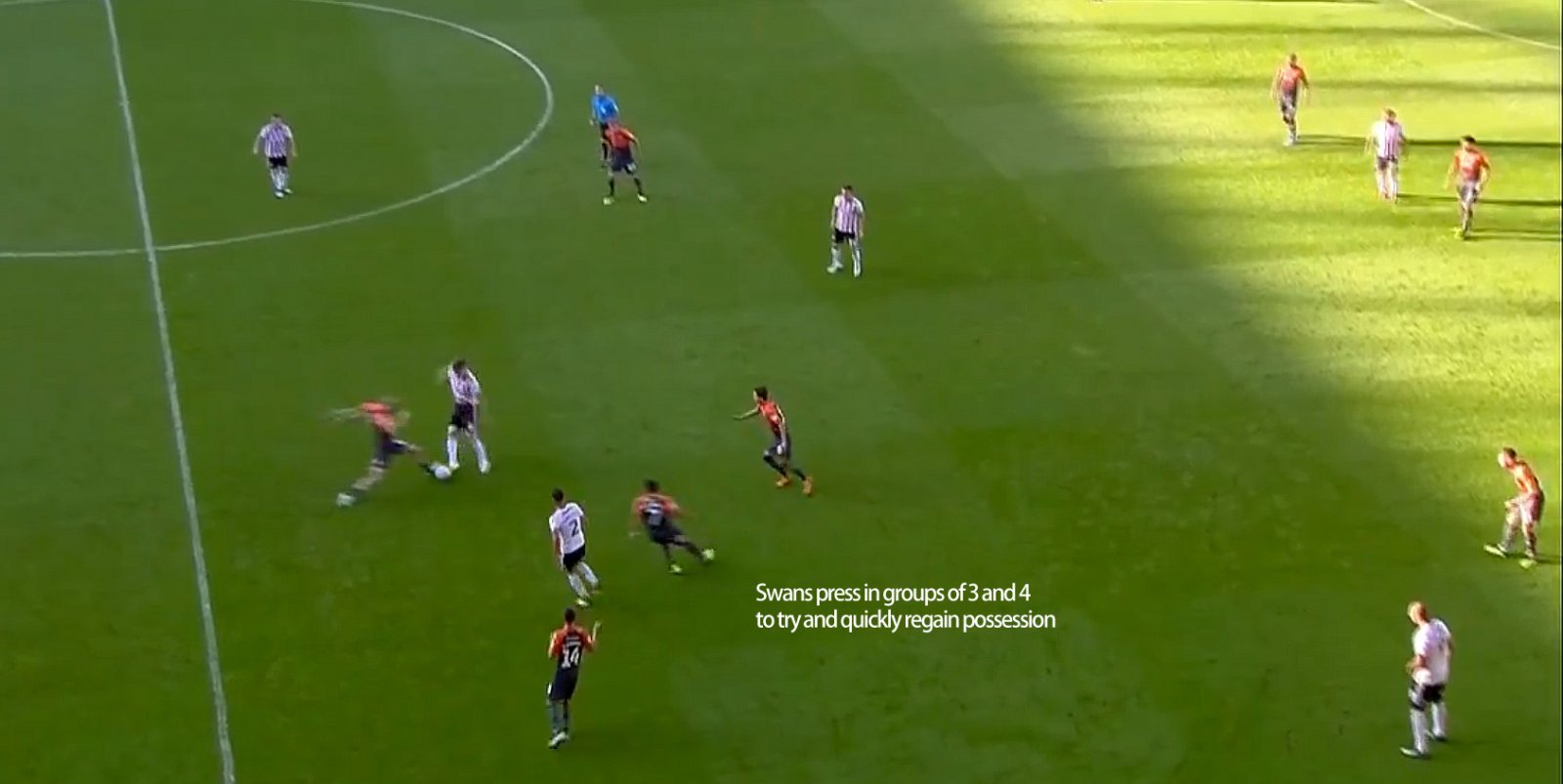 We mentioned earlier about our well-balanced pressing approach compared to Sheffield United’s lack of a tactical plan and we looked at it in part 1 here.

Below shows a good example of this. We saw the ge-gen pressing above where the team saw a safe-enough opportunity to do this. The Swans now sense a good opportunity here to press further up on United’s backline. In this example, it’s Carroll and Asoro doing the pressing with McBurnie occupying the two midfielders. The Swans have things covered well here, the press is quick enough to prevent the defender in possession from passing into midfield, and McBurnie is well-positioned to make this a risky move. Fulton pushes out wide to mark the left full-back so the Swans quickly pressed well as a team to stop United building a possible attack. 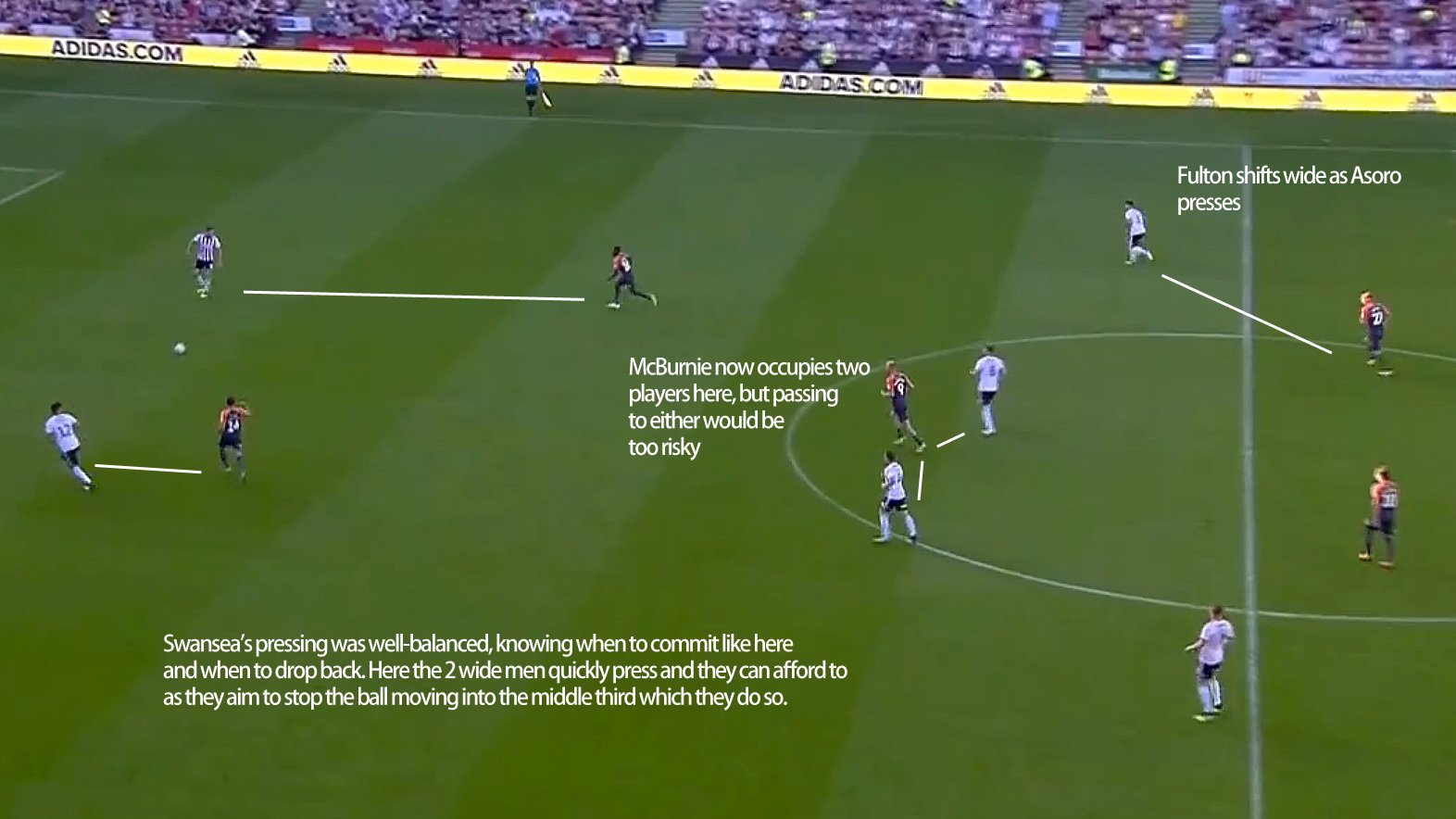 There were other times when we dropped deeper and allowed their defenders to have the ball in space, but this was ok because we had everything covered again in the middle third. Like in the first half, Sheffield United are limited for options here and have to go down the flanks to move forward in possession. 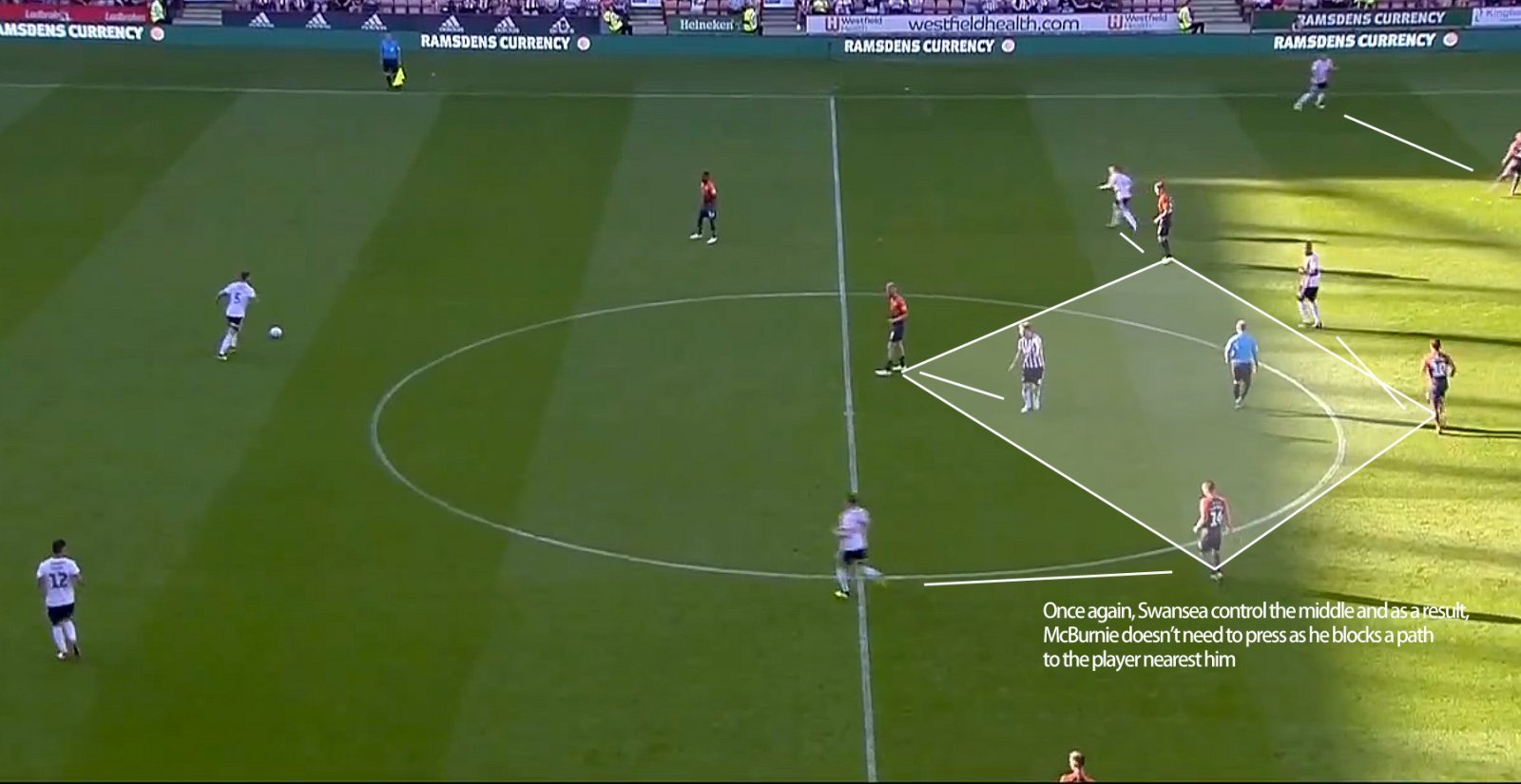 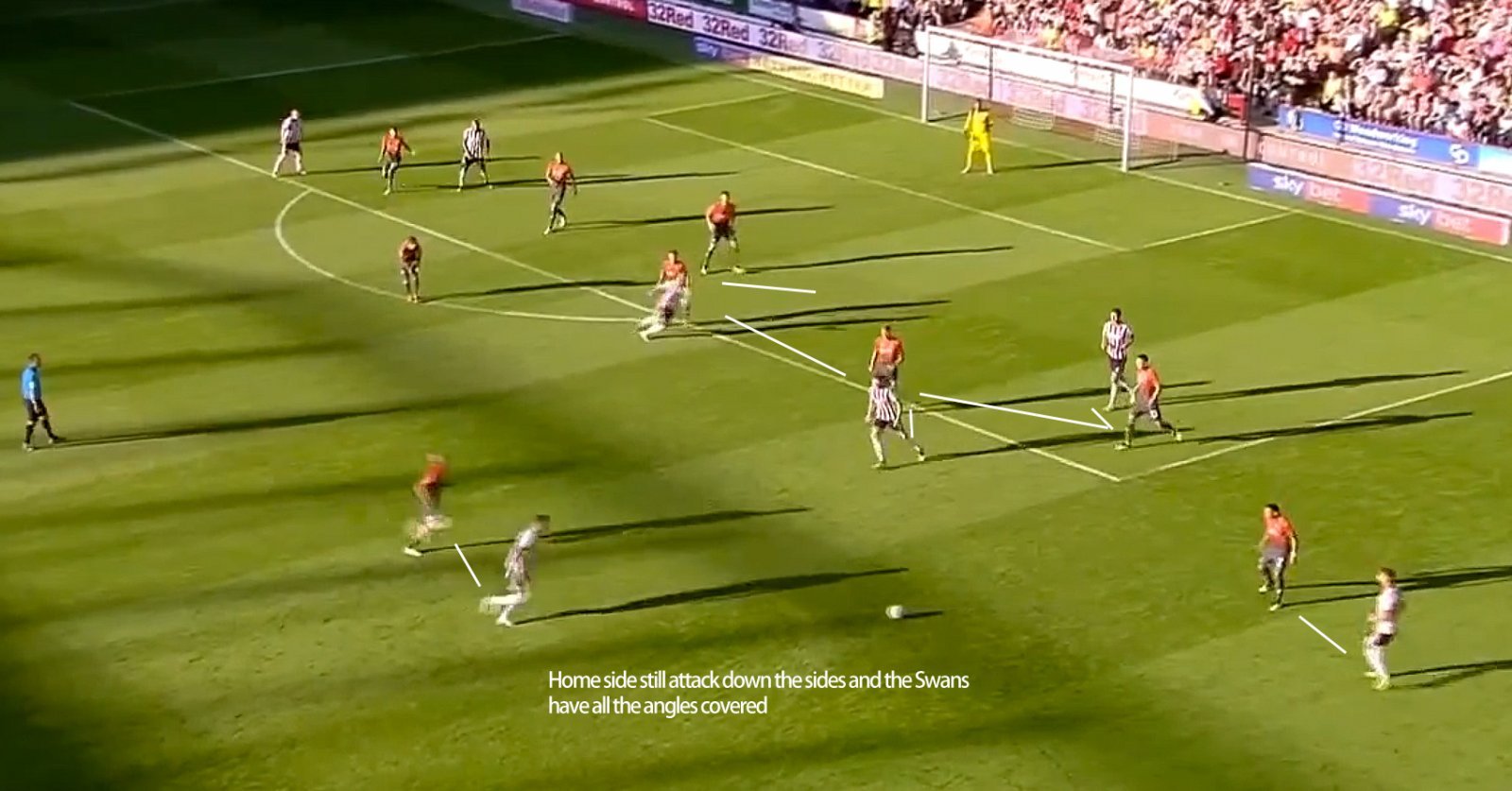