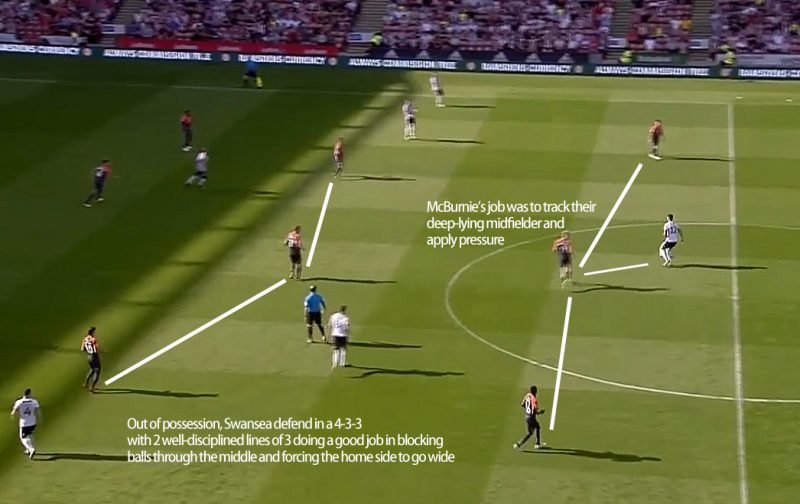 Saturday’s season opener away at Sheffield United offered us a first real chance to see some of the tactical ideas that Graham Potter is looking to implement here as he aims to re-establish the ‘Swansea Way’ following years of conservative, defensive football in the Premier League.

Having been used to that defensive and negative football, usually where we’d sit deep in a back 5 and try to counter-attack despite lacking real pace in the side, Potter’s setup at Bramall Lane offered many comparisons and positives that were welcome to see. A number of annoyances from last season were no longer to be seen!

Potter ditched our back five and adopted proper wingers who were given the freedom to stay high up the pitch to offer real counter-attacking potential rather than pulling on their defensive skills instead. The pressing was also better balanced as they made life difficult for the home side, often forcing them into wide areas where they weren’t able to threaten the Swansea goal.

Graham Potter adopted a 4-3-3 system rather than the expected 4-2-3-1 that we often saw during pre-season. Jay Fulton operated in the centre and at the base, with Carroll on the left and Celina on the right pushing forward to begin with. 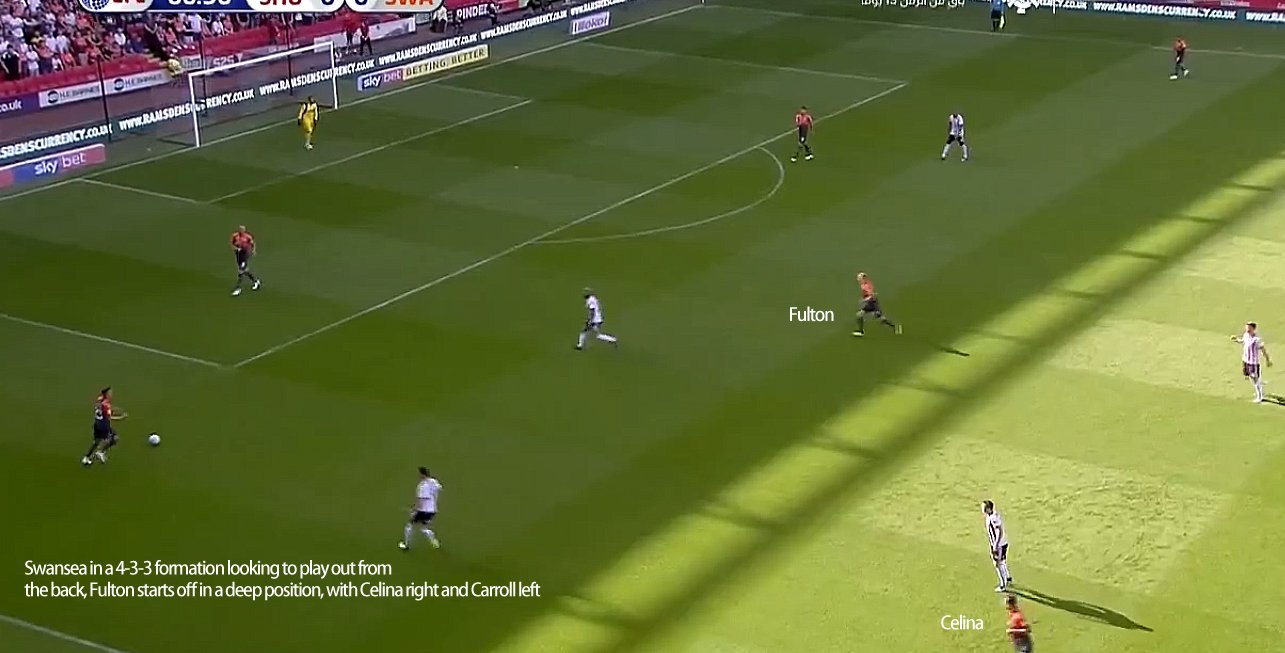 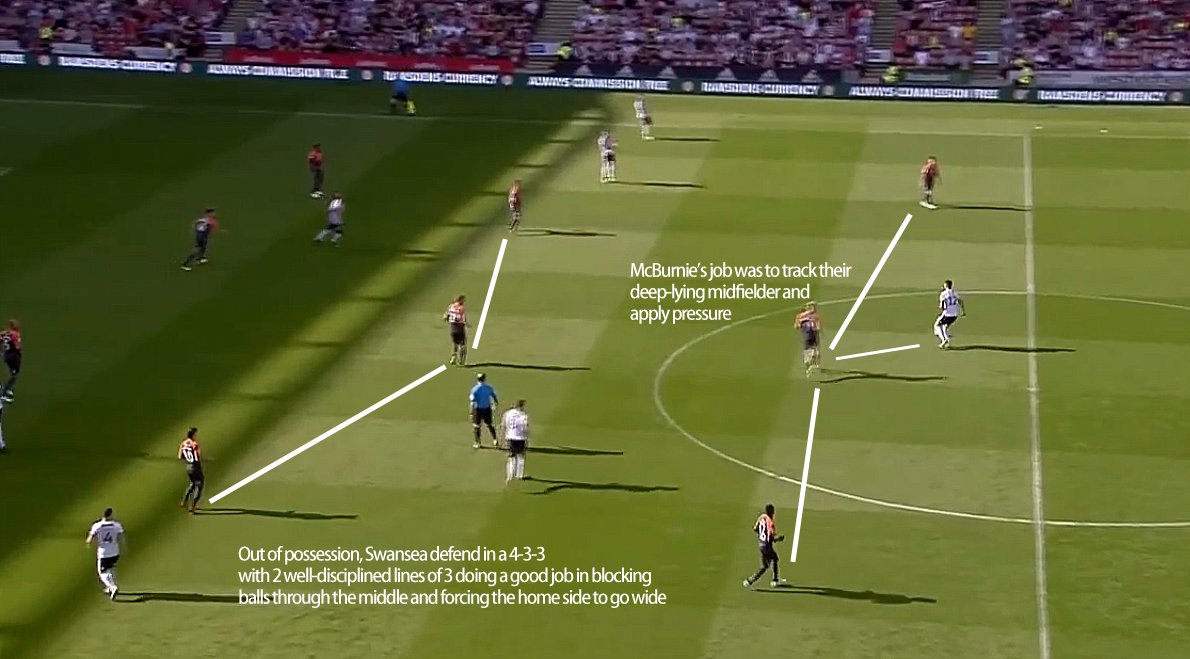 Swansea City also formed a diamond at times with McBurnie dropping deep and operating at the tip, with Fulton starting at the base before Celina and him swapped places after 35 minutes. 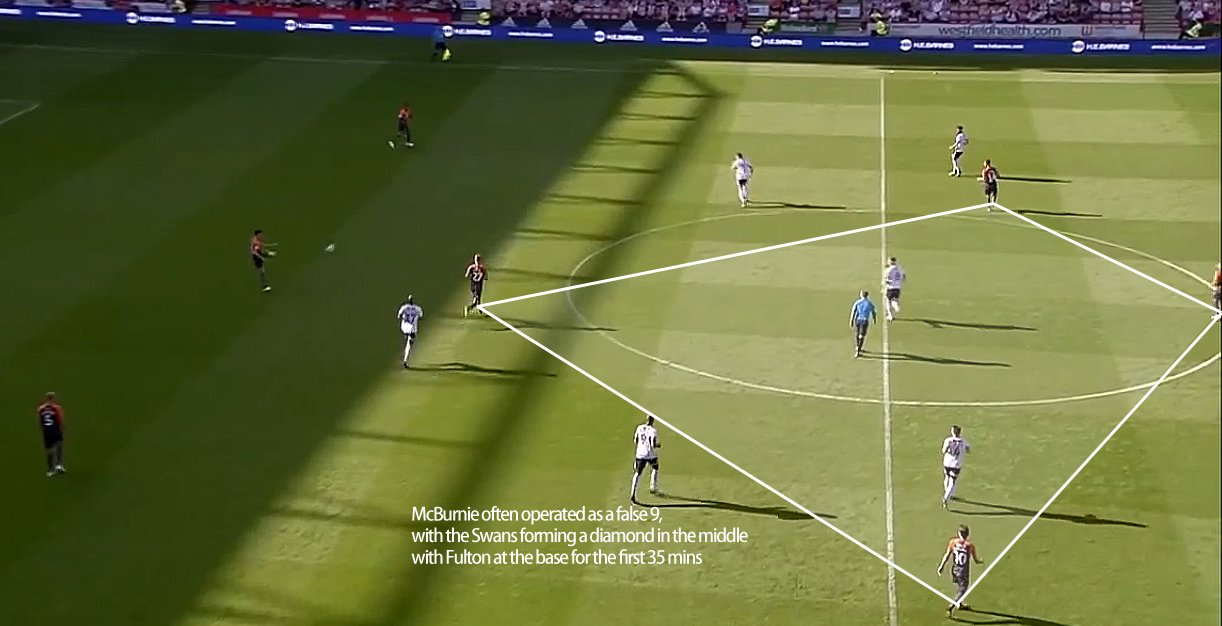 Last season we often saw the wide players dropping deep, so much so that they were sometimes in the defensive line to form a back six before Carvalhal took over and insisted on a back five.

So it was refreshing to see Graham Potter adopt more positive tactics away from home in his first game. As often as possible, Potter wanted the two wide midfielders (Celina and Carroll) to assist the full-backs in defending. This allowed both Asoro and McKay to stay further upfield to offer an out-ball when possession was won in these deep positions. 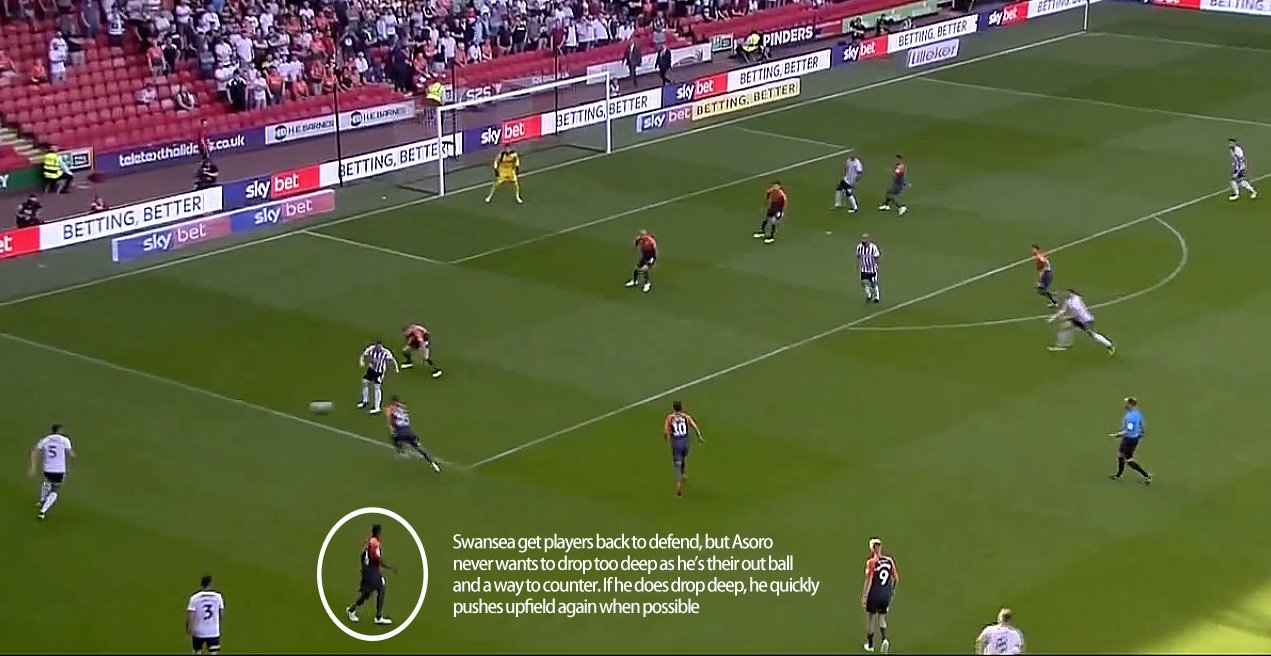 The above screenshot shows Asoro circled. He has just dropped deep to help out defensively, but as soon as they have cover here, he quickly moves upfield again.

Below, with Roberts, van der Hoorn and Celina marking the three Sheffield United players down their left side, Asoro can afford to stay in an attacking position and as you can see he’s not even in the picture in this example. 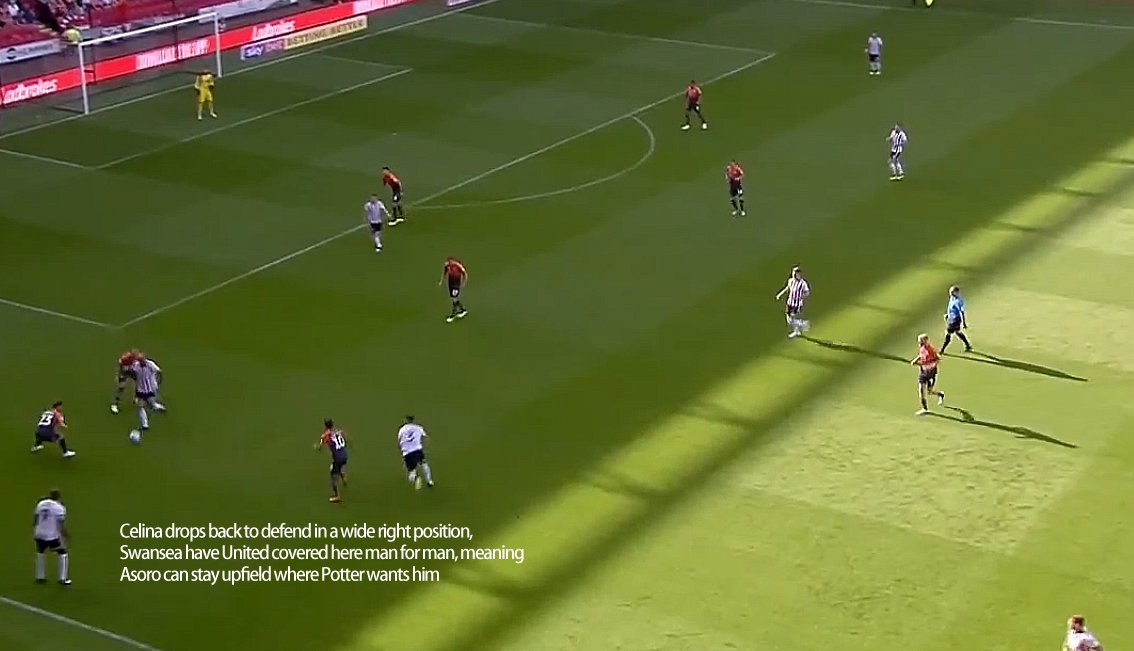 Swansea stop the short passes from the goalkeeper

The Swans also pushed two players up to cover the two centre-backs to prevent short passes from the goalkeeper. 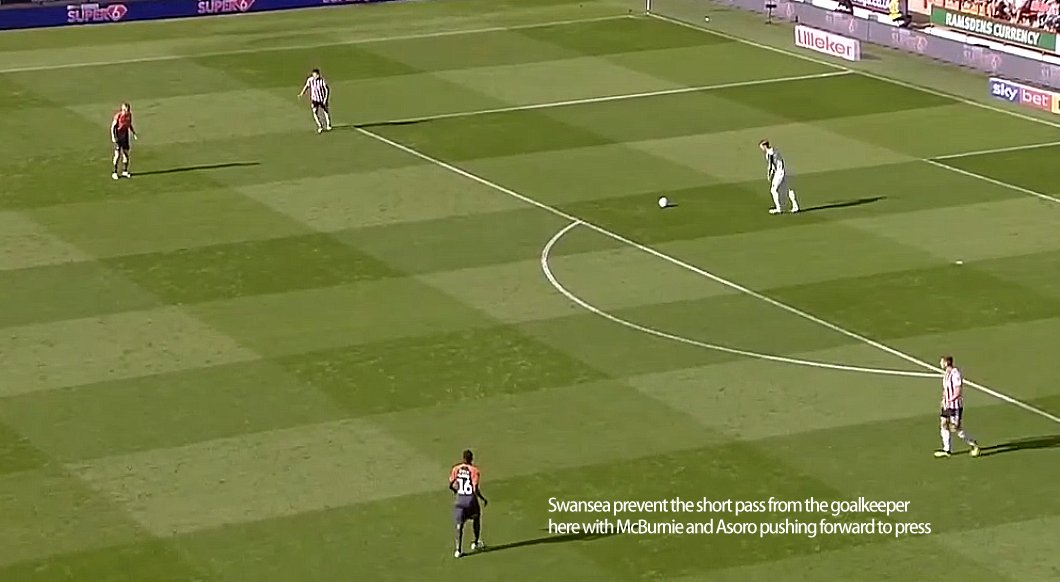 In my player ratings for the game, I only gave Oli McBurnie a 6.5 rating out of 10, and looking back now that was harsh. His crucial job of constantly ensuring that Sheffield United couldn’t pick up possession in the middle of the pitch almost went completely unnoticed.

The lone striker was constantly glued to Sheffield United’s Evans in the middle and this prevented them from gaining any control in the centre. Whenever the ball came into him in the central areas, he was usually forced sideways or backwards. You can see this in action below, plus Swansea’s midfield trio behind blocking a path through to United’s players who occupy the space in between the lines.

McBurnie was also often encouraging his team-mates to push up with him. It was a joint effort up top when Sheffield United were in possession, as he needed his wide-men to push up and block the passing lines. 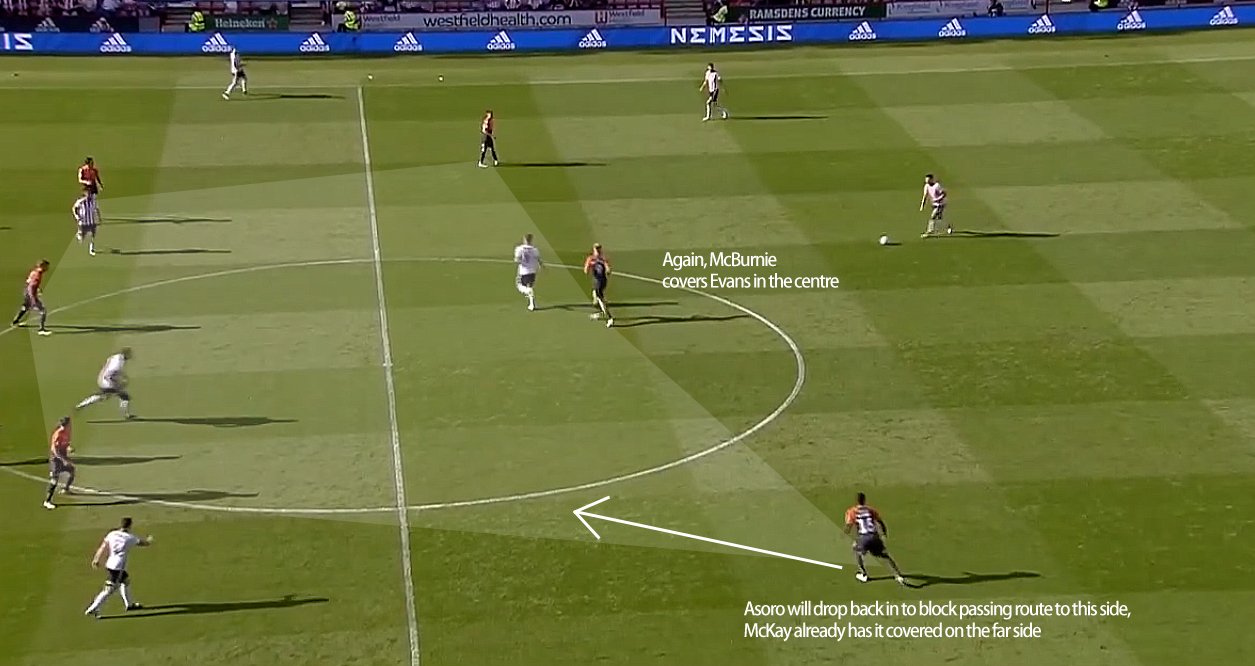 At times there were rotations amongst Swansea’s midfield three. Below, Carroll is the deep operator and Fulton has pushed up alongside McBurnie with Celina alongside down the right. Also, notice the large area of space down our left side, this allowed McKay far too much time and space to show his quality, while Asoro didn’t enjoy quite so much freedom down the right. 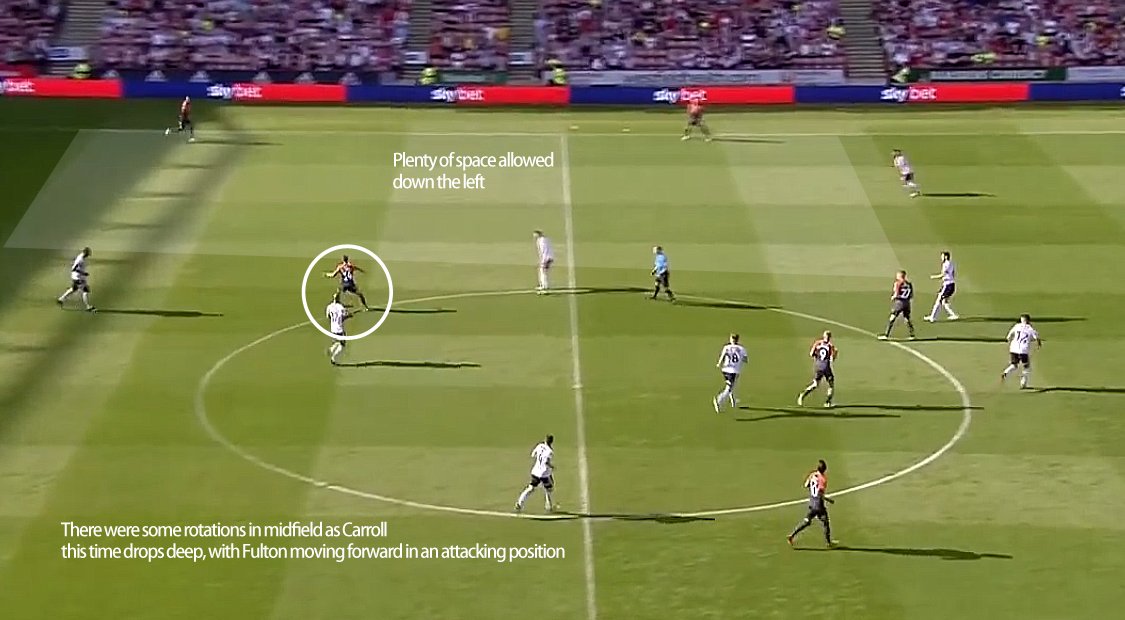 Both teams attacked in wide areas in the first half

Both the Swans and Sheffield United were reluctant to over-commit in the first half and so a lot of the attacking play was down the flanks which meant that there was very little in the way of clear chances in front of goal.

Sheffield United, in particular, were constantly putting crosses into the box but these were always being dealt with easily by van der Hoorn and Fernandez. 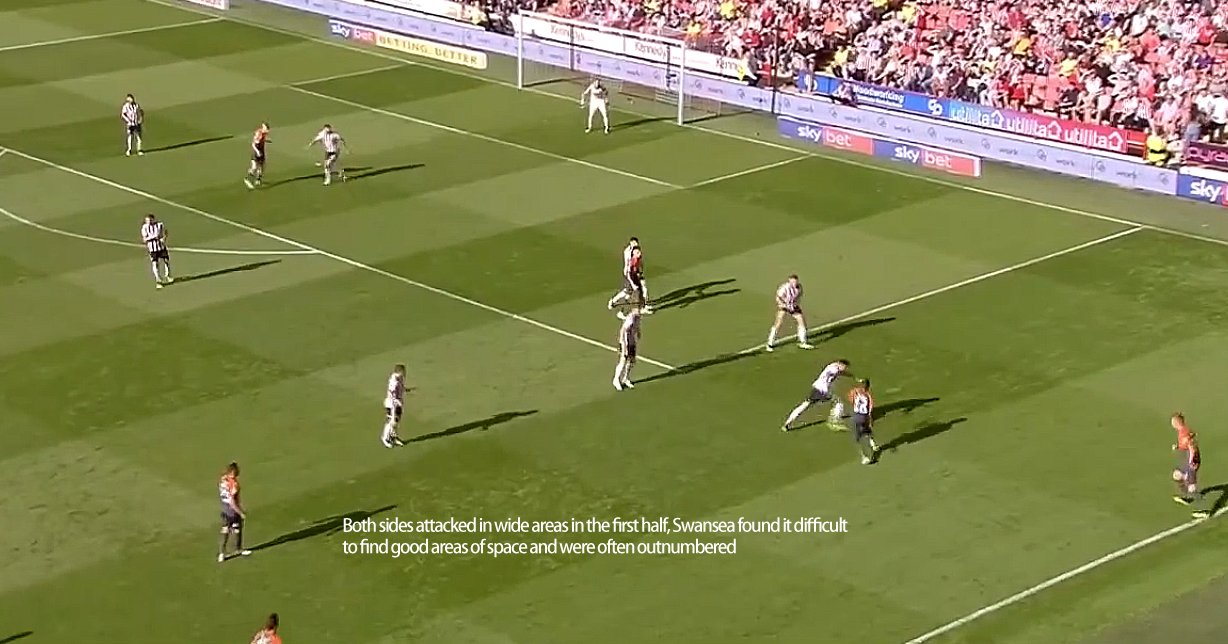 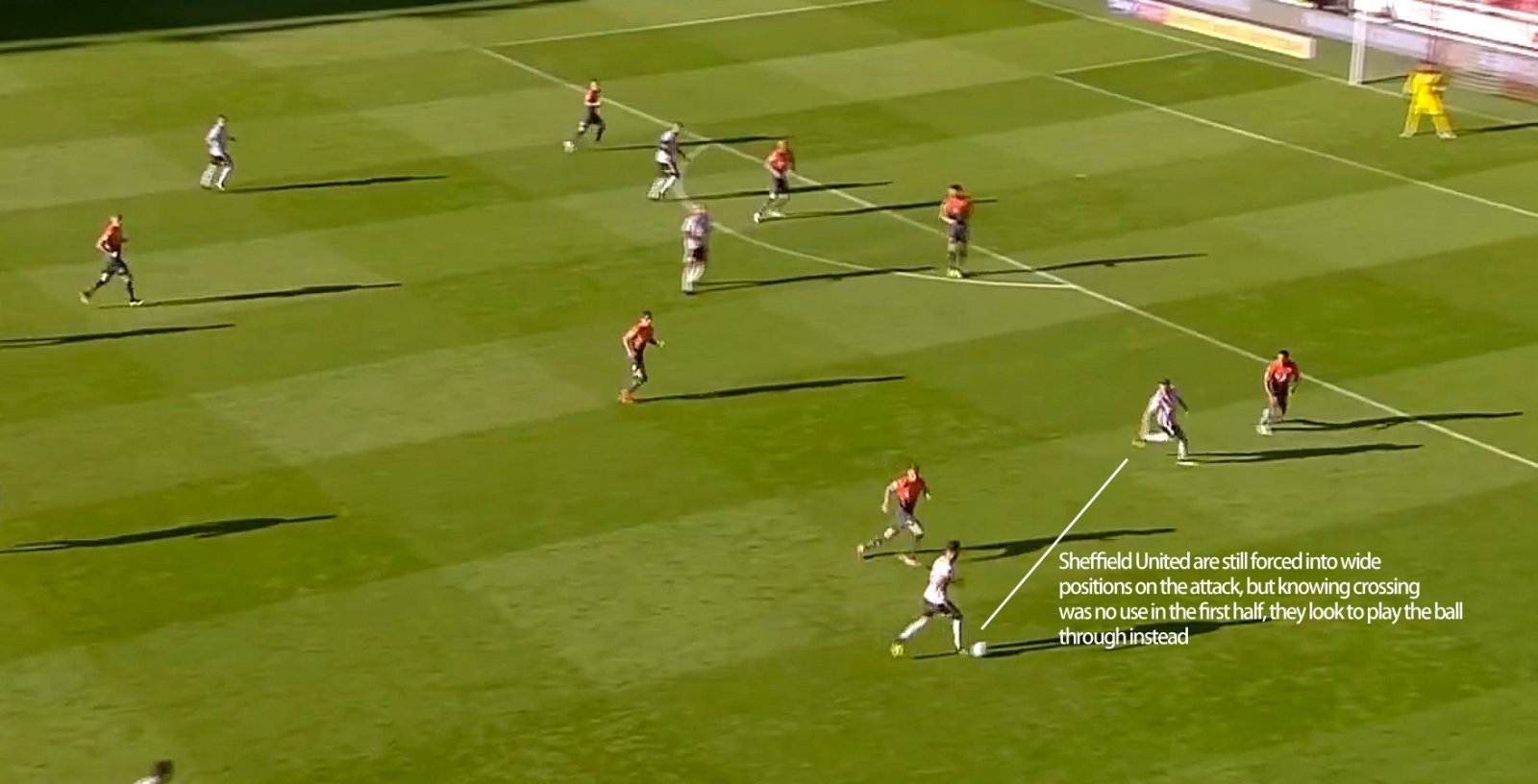 The Swans did attempt to try and connect quick passes through the central areas as they knew it would be pretty pointless attempting aimless crosses for a lone striker. Fortunately for us, the home side didn’t recognise this and it was their main plan of attack in the opening 45 minutes.

What was so refreshing to see was the attempt to play quick one-twos through the middle and into these areas just out side the penalty area – below. They didn’t quite come off to begin with but the intentions were good. 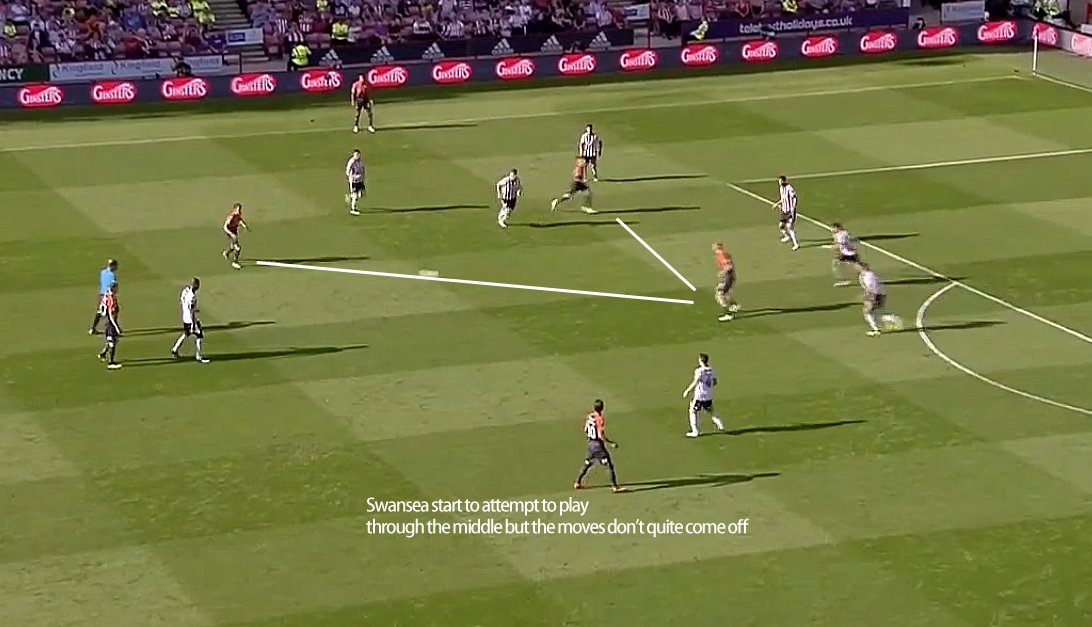 A big frustration of mine last season was our poor attacking shape and our constant habit – especially under Paul Clement – of splitting into wide areas with absolutely nothing through the middle but a wide open space.

This wasn’t the case here though. Many times there were three players in close proximity of each other through the middle channel. Players playing closer together allowed them to link up far easier and we saw this more and with better quality in the second half. 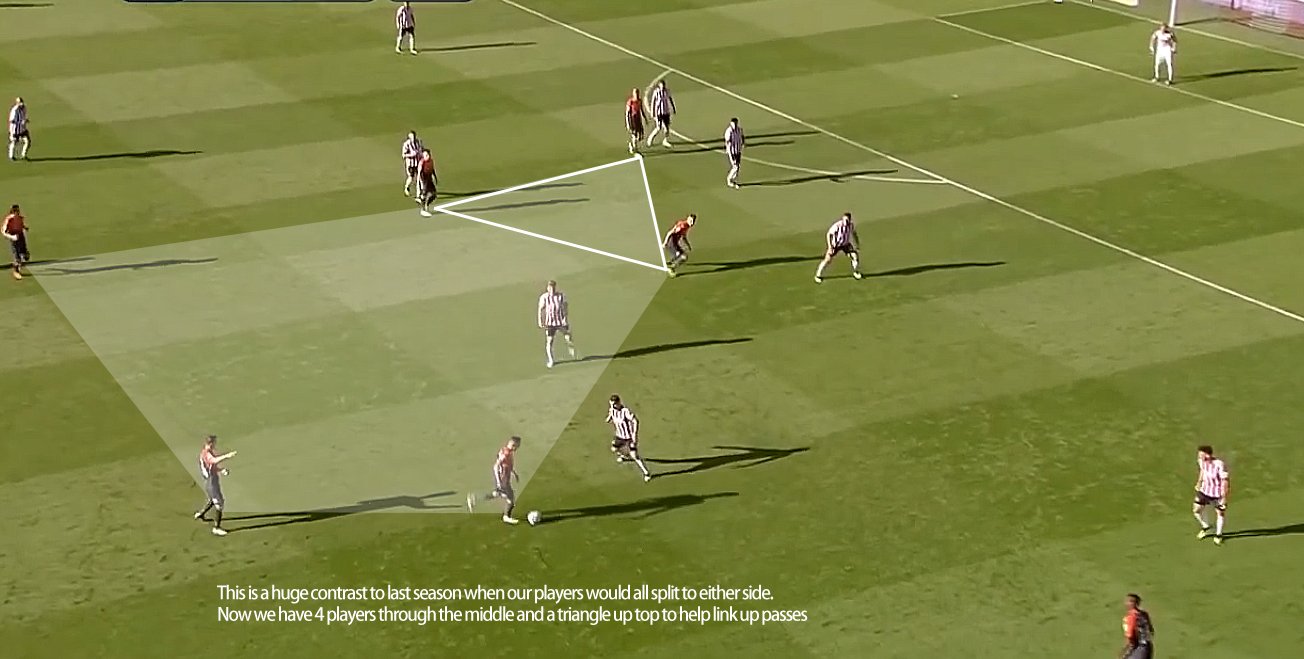 The Swans often had to recycle possession from side to side, with a lot of congestion down the near, right side. 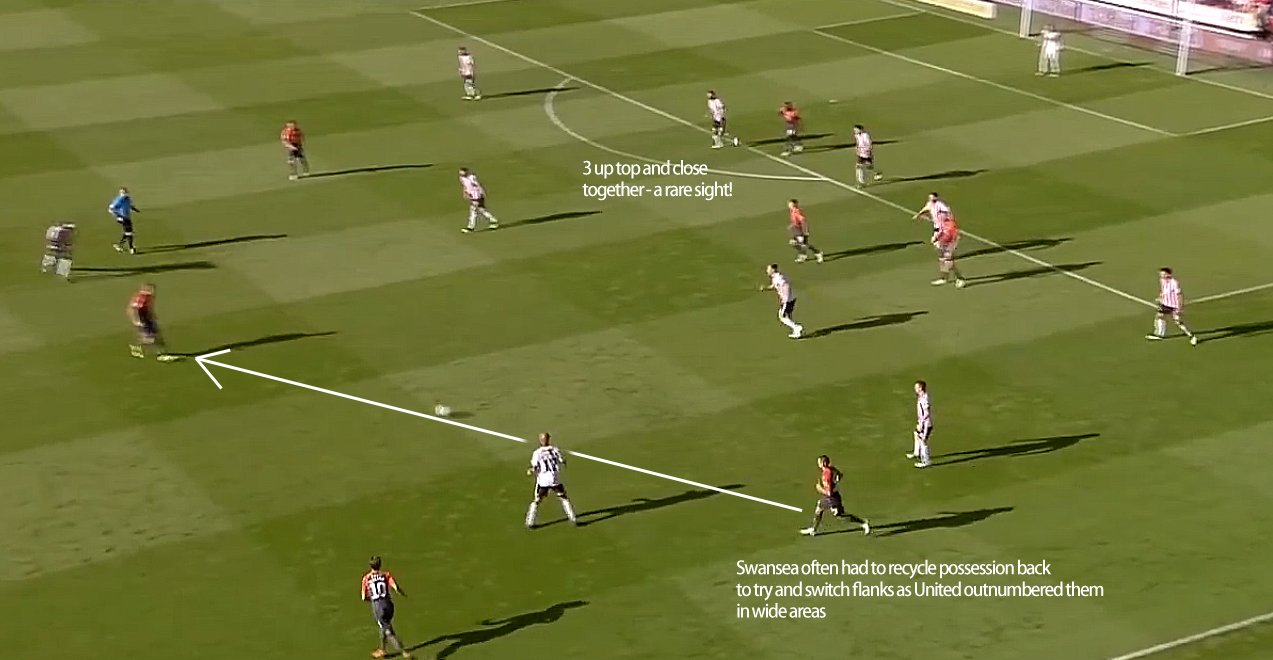 Another welcomed return I’m sure for supporters to see was the use of proper wingers. Both Asoro and McKay stuck to their intentions – hugging the touchlines and waiting for opportunities. In the below example, McKay could always come off the touchline and move inside in an attempt to see the ball, but he stuck to his position as the Swans looked to stretch the opposition as much as possible. 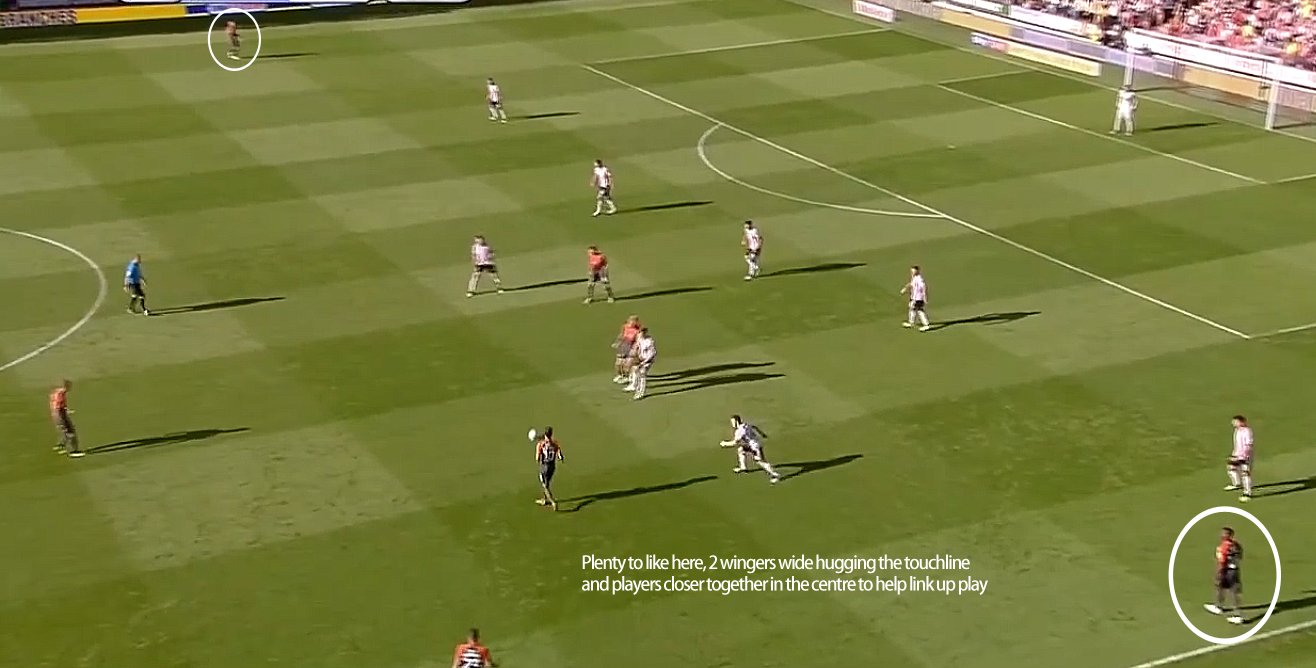 After about 35 minutes, Swansea boss Graham Potter made the wise choice in swapping Fulton and Celina. Fulton was struggling with the deep role and he didn’t quite have the dynamism and quick thinking to connect the play when retrieving the ball from a defender.

When Celina moved there, you could quickly see the difference. 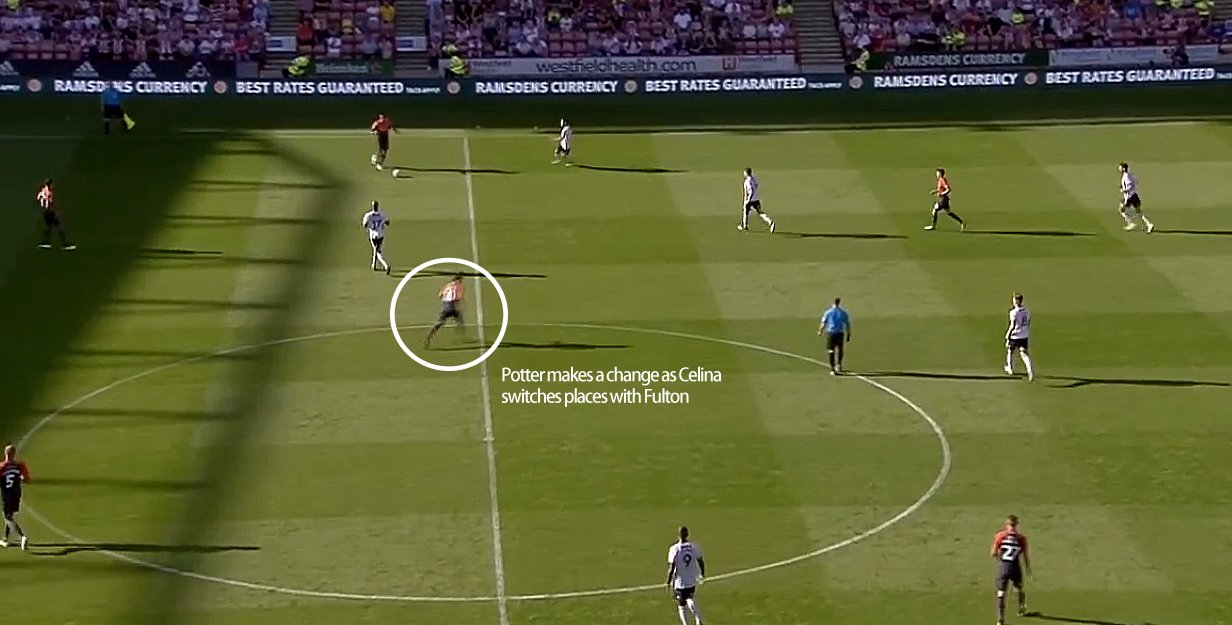 Below, both Carroll and Celina are deep just inside their own half. To compensate and maintain the diamond shape through the middle, Asoro moves inside off his line while McKay can stick to his position. Also notice again the amount of free space down that left side. 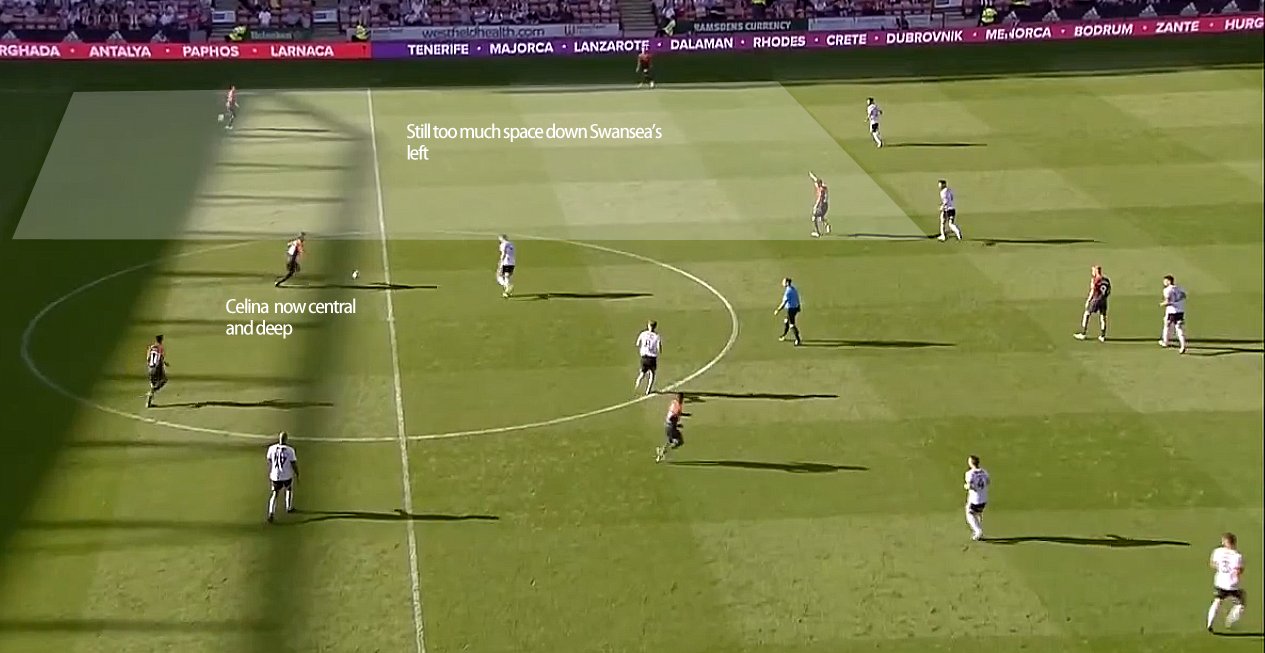 There was a big difference in both teams’ pressing and the effectiveness of it. Swansea’s was well balanced, pressing when they needed to and backing off when appropriate. United, on the other hand, backed off far too often, inviting play into their own half and allowing Swansea’s far too much time in possession, and this got far worse in the second half as the Swans finally began to make use and punish them for it. 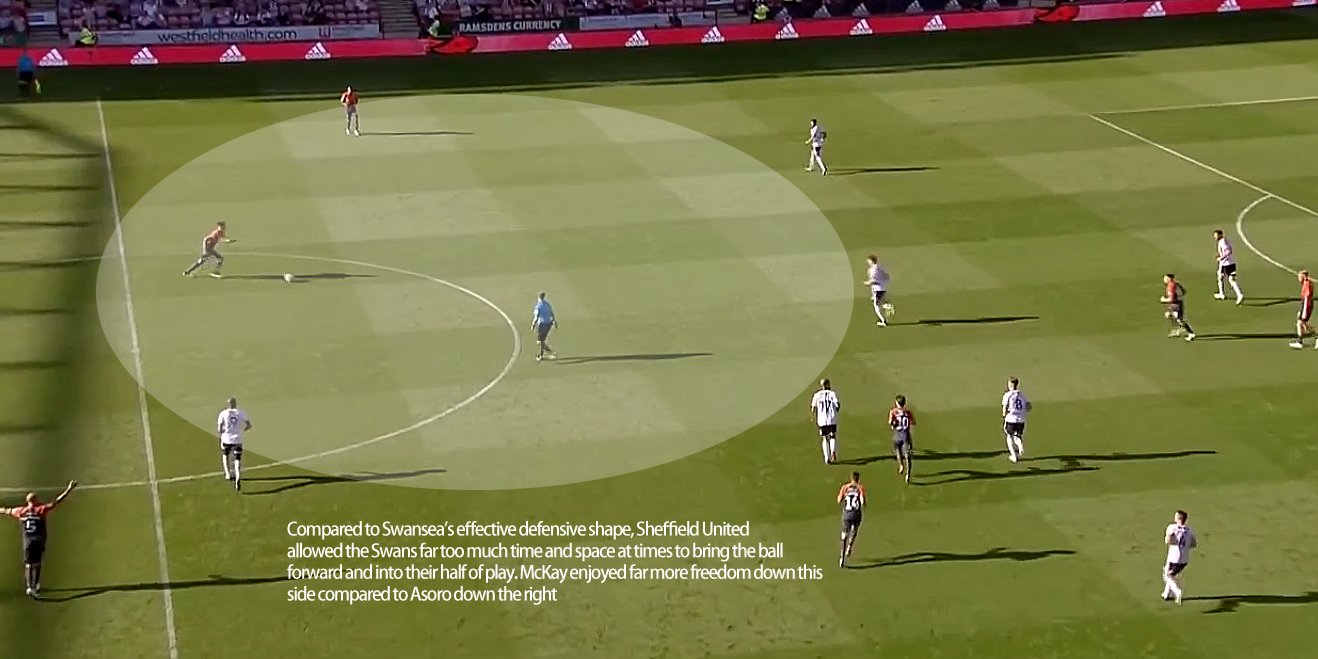 Above, the Swans have plenty of space to move the ball forward inside the host’s half in the opening 45 minutes, while below the Swans have it just right. They’re not pressing the player in possession, but they’re doing an effective job in front of him. Like we mentioned above, McBurnie’s tracking role is a crucial one as it stops the defender from passing the ball through the middle, and the wide passing options are also limited thanks to the positions of both McKay and Asoro.

Further back, Fulton is man-marking and Carroll will also be quick to press his nearest opposition player if need be. 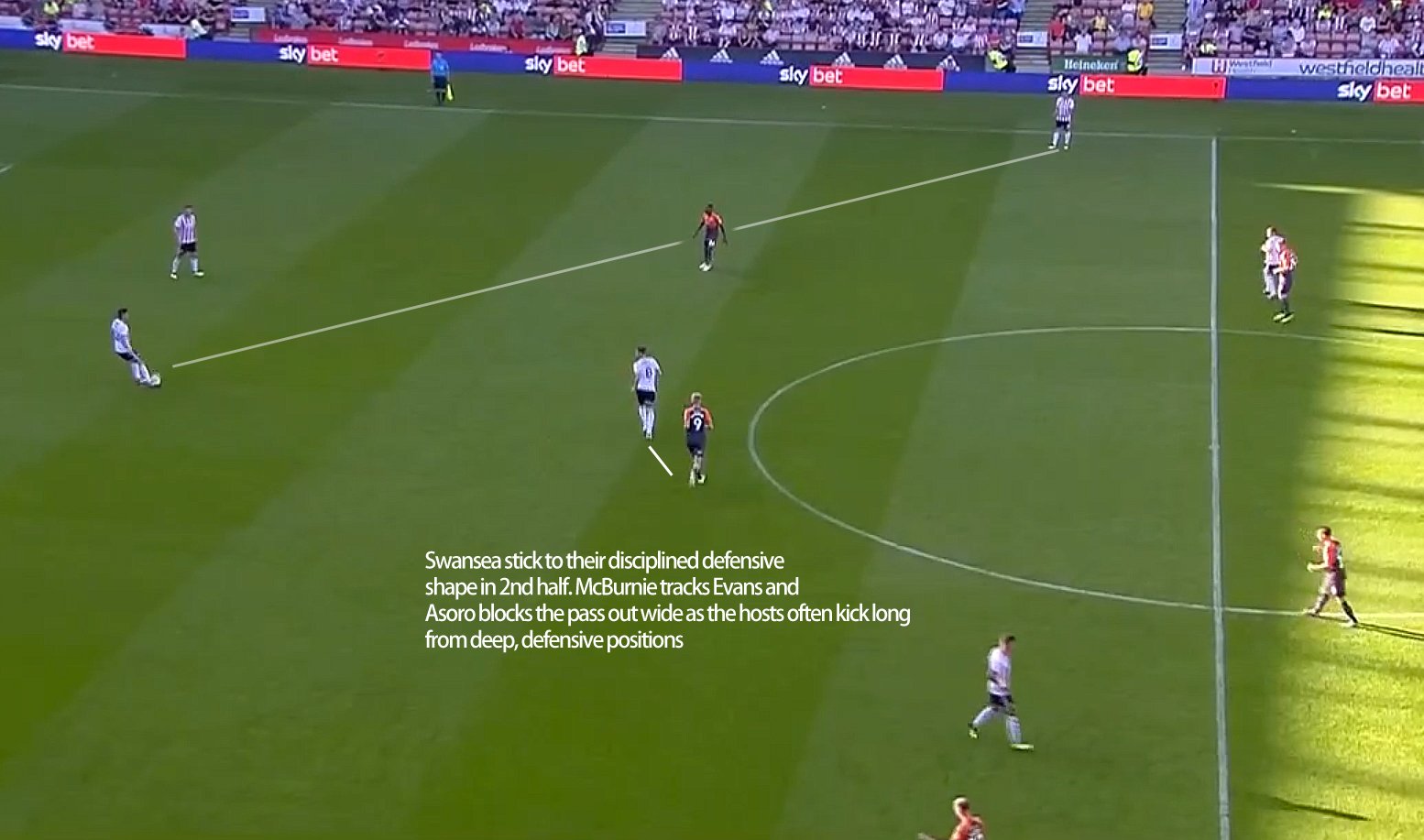 Once again, Swansea City always ensure that Sheffield United don’t have a free player in the centre who can pick up possession and do what he wants with it. With McBurnie tied up below, Carroll presses and in doing so, Sheffield United’s number 2 has to pass backwards again. If Carroll doesn’t press here, the home side can easily bring the ball forward and possibly create an attack. 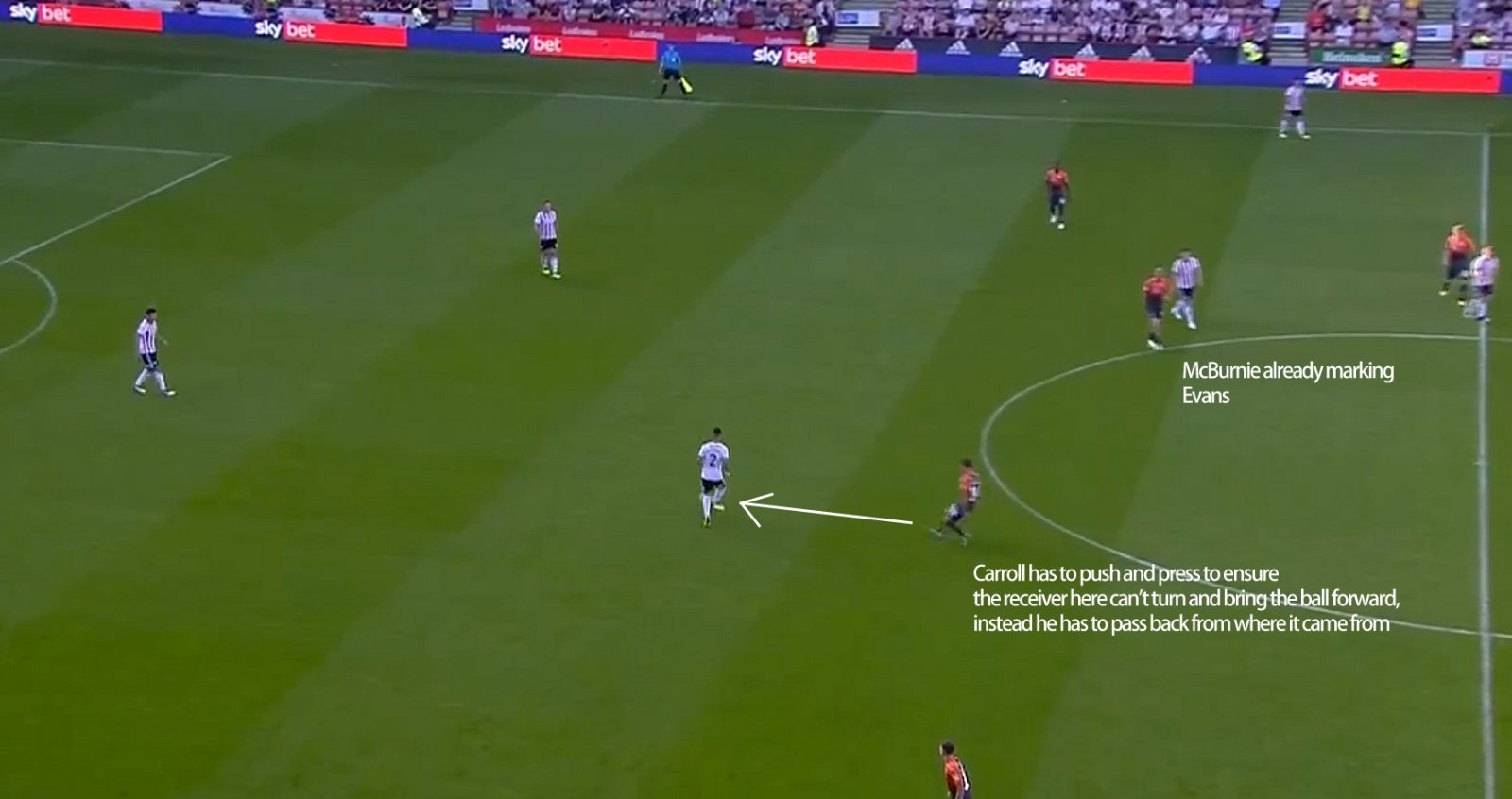 The Swans did sometimes press with more intensity. Below, they noticed an opportunity to force United into making a mistake as both McBurnie and McKay apply good pressure. 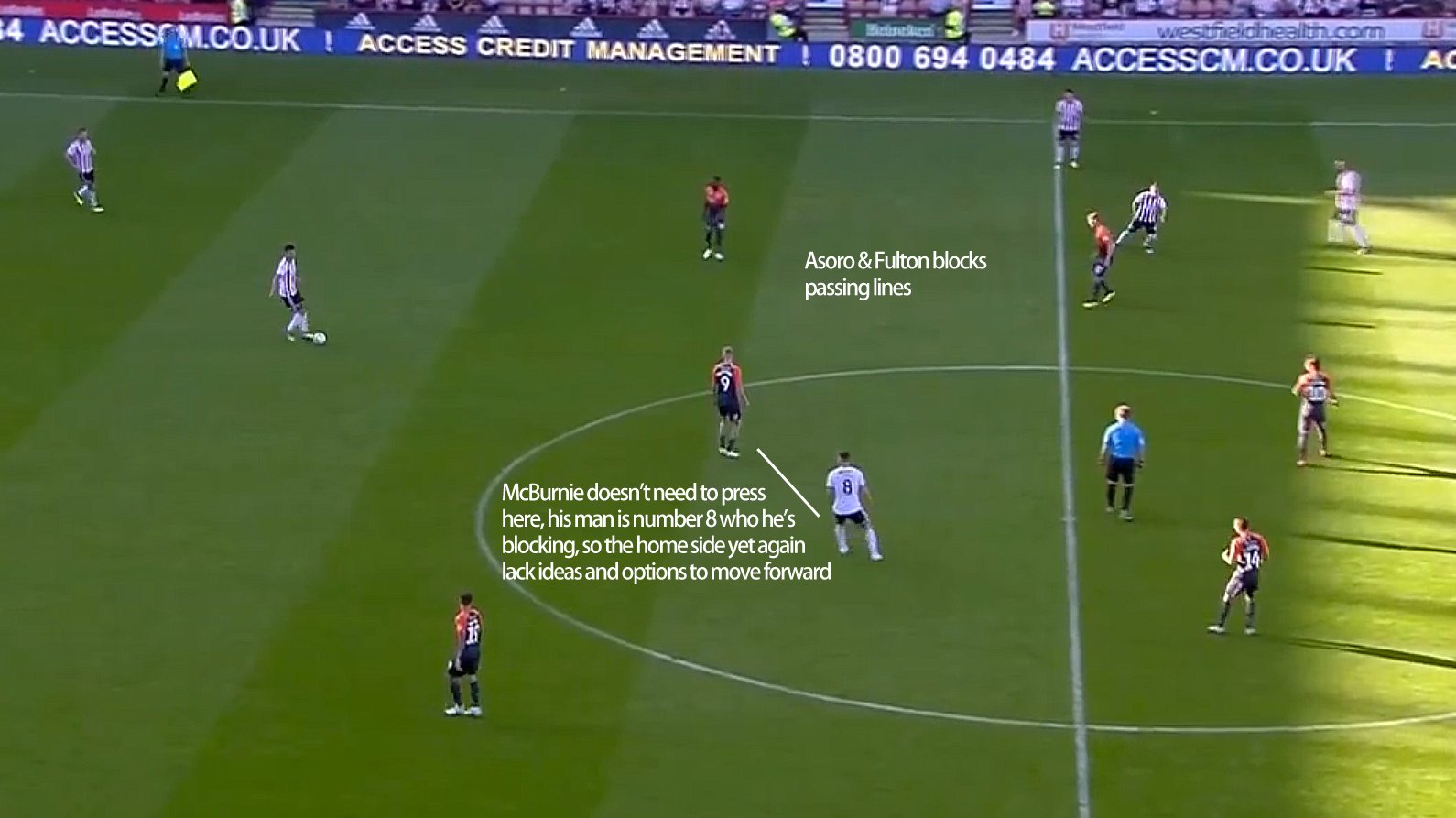